Case report: Immunohistochemical characterization of pulmonary corpora amylacea in an autopsy case, with special reference to its pathogenesis

Pulmonary corpora amylacea (PCA) is rare. We report here an autopsy case of a Japanese woman in her eighties who harbored numerous PCAs in both lungs. Multiple infarctions were found in the brainstem as the cause of her death. In an attempt to characterize these PCAs, several antibodies were used, including those to surfactant protein (SP)-A, SP-D, KL- 6, epithelial membrane antigen (EMA), pancytokeratins, and macrophages. PCAs were almost all positive for SP-A, in concentric lamellar fashion, some with niduses. Internal positivity of PCAs was observed on diastase-digested PAS reaction. Staining for SP-D was negative. More than half of the PCAs were covered by macrophages, indicating that they were foreign bodies. With regard to the pathogenesis of PCAs, we believe that SP-A is one of the important factors whether niduses are present or absent, and that SP-A is gradually deposited on the surfaces of PCAs in lamellar fashion. Our findings indicate that SP-A is required for the formation of PCAs, and suggest that pulmonary dysfunction, leading to an imbalance between the production of SP-A and its absorption, might be the cause of the deposition of PAS-positive glycoproteins and/or SP-A as PCAs.

Pulmonary corpora amylacea (PCA) is a rare condition, and is detected especially in the elderly, at a frequency of 0.6%–3.8% of autopsies [1,2]. Some studies have reported that the pathogenesis of PCAs involves the degeneration of pulmonary macrophages[3] or needs the formation of niduses 2,4]. PCAs have been proven to express the surfactant protein-A (SP-A) [5] and epithelial membrane antigens (EMA) [6]. In this study, we analyzed PCAs by performing detailed immunohistochemical studies using several antibodies, including antibodies against SP-A, surfactant protein D (SP-D), EMA and KL-6. Then, the comparison of both PCAs and prostatic amyloid bodies were also performed on the stainability with SP-A antibody. We propose a hypothesis for the pathogenesis of PCAs on the basis of the results of immunohistochemical studies, especially those using SP-A.

We report the case of an 81-year-old female with cerebral infarction. On autopsy, we detected infarcted foci in left thalamus , cereberum and medulla oblongata as the cause of death(whole brain 1120g). Then, many PCAs were found in both lung (265g, lt., 325g, rt.), combining focal diffuse alveolar damage pattern with superimposed bronchopneumonia. PCAs were detected incidentally during histopathological examination of pulmonary tissues. Besides routine Hematoxylin-Eosin stain(H&E), periodic acid Schiff reaction with diastase digestion and congo red stain were performed. Then, amyloid bodies in prostatic tissues of nodular hyperplasia from three patients, each seventieth or eightieth in ages, were also used in order to compare those with SP-A stainability.

Routine HE staining of lung tissues revealed PCAs of eosinophilic round or ellipsoid bodies (diameter, 50–100 um). These bodies were detected in the airspace, including respiratory bronchioles and alveolar ducts (Fig. A). The isolated PCAs were positive for the periodic acid- Schiff (PAS) reaction, and some of them contained black granular niduses (Fig. B). Staining with Congo red revealed pinkish needle-shaped nidus-like structures having birefringence at the center of the PCAs (Fig. C, arrow). The central nidus-like structures were present in almost one-third of the detected PCAs in total (45 out of 167, 26.9%). AE1/AE3 immunostaining revealed that only a few PCAs (8 out of 181, 6.1%) were surrounded by more than 2 epithelial cells (Fig. D). However, CD68 immunostaining that more than 2 macrophages were associated with almost half the number of PCAs (74 out of 163, 45.4%) (Fig. E). SP-A staining revealed several remarkable findings; PCAs were stained in various patterns such as partial or total concentric rings and doughnut-shaped patterns with central-negativity (Fig. F-J). Of the 155 detected PCAs, only 2 (1.3%) PCAs were completely negative for SP-A staining. As controls, prostatic tissue samples from 3 cases of prostatic nodular hyperplastic lesions with amyloid bodies in the glandular spaces were stained for SP-A; these samples were completely negative for SP-A. This observation suggested that prostatic amyloid bodies were different from PCA. SP-D was not detected in the PCA (Fig. K). Although the internal EMA-negativity of PCAs in the present study can not be explained at present, the findings of our study indicate that SP-A is very important for the morphogenesis of PCAs, as evidenced. 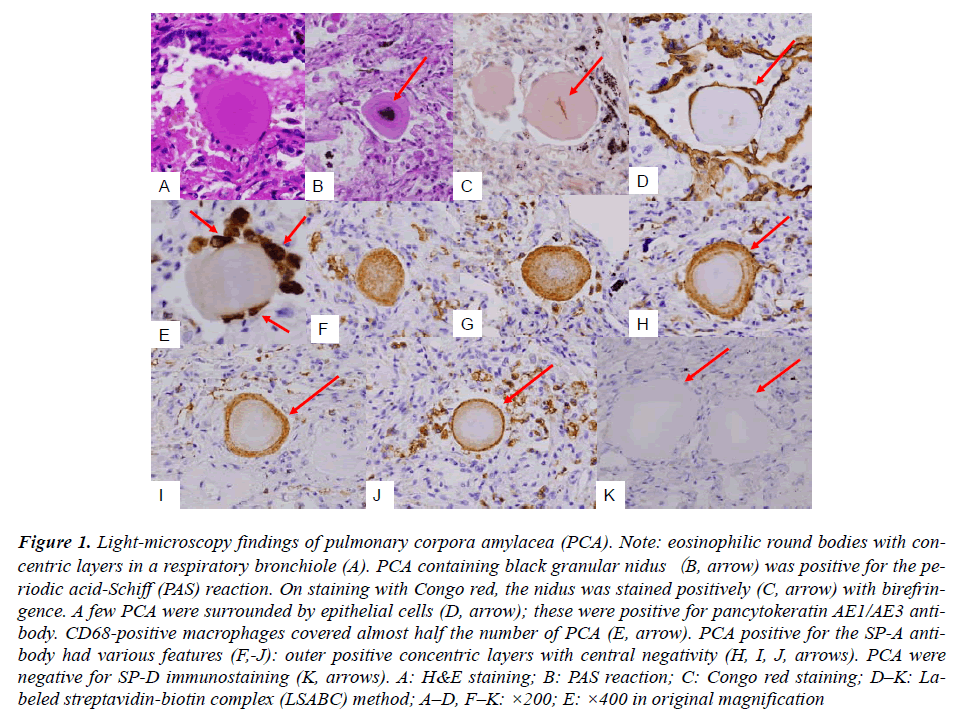 Histopathologically, some PCAs contained needle-shaped niduses (Fig. F and J), and the cores of the PCAs were found to be composed of niduses and PAS-positive glycoproteins. Then, SP-A deposition was demonstrated on the surfaces of PCAs in thin or thick concentric layers. Therefore, the surfaces of PCA were composed of SP-A, while PAS-positive glycoproteins comprised the interior; With regard to the pathogenesis of PCA, we believe that SP-A is an important factor irrespective of the presence or absence of nidus and that SP-A is gradually deposited on the surfaces of PCAs in a lamellar fashion. Previous studies have reported that the regenerating pulmonary epithelial type II cells[7] and coarse granules of pulmonary alveolar proteinosis (PAP) [10] were positive for staining with SP-D antibody. PCAs were stained superficially in a linear fashion with KL-6 and EMA antigens. A previous case study reported that, PCAs were positive for SP-A and EMA[6].However, concentric depositions of EMA and KL- 6, which are fundamental components of the surface of airways[8], appeared to be deposited only on the surfaces of PCAs in a linear fashion. The contents of lymph vessels in PAP were stained positively for KL-6 and SP-D, indicating lymphatic drainage of KL-6 and SP-D [10].However, unlike the case of the study on PAP[10]., no significant findings in lymphatic vessels were detected in this study. The deposition of SP-A on the surfaces of PCAs and its absence in the lymph vessels in this study can be attributed to improper lymphatic drainage due to pulmonary dysfunction. A few PCA were surrounded by epithelial cells, suggesting that epithelial cells do not likely grow on PCAs. Because almost half the number of PCAs were covered by macrophages, we concluded that they are recognized essentially as foreign bodies.

It is interesting to note that SP-A was almost exclusively positive for PCAs, but negative for SP-D; the reasons for this variable distribution are unknown. SP-A seems to exhibit some affinity for nidus-containing glycoproteins that are positive-for the PAS reaction. The presence of niduses and glycoproteins in the PCA cores and the deposition of SP-A on the surfaces of the PCA in a concentric fashion are vital observations of our study. Pulmonary dysfunction leading to an imbalance between the production of SP-A and its absorption mechanism might be the cause of the deposition of glycoproteins or SP-A as PCAs.