Gorlin's Goltz syndrome (GGS) is a rare autosomal dominant inherited condition. It in-volves many organs, but principally affects the skin, skeleton, endocrine and nervous sys-tems. It consists of the classic triad of basal cell carcinomas, multiple jaw cysts and skeletal deformities along with other defects. The authors report an unusual case of a fifteen year old male patient who reported with the complaint of swelling and mild pain in the lower right side of the jaw. Investigations revealed multiple cystic lesions in both upper and lower jaws which were found to be Odotogenic Keratocysts (OKC), presence of bifid rib and mul-tiple nevi. The clinico-pathological diagnosis was made as Gorlin- Goltz syndrome (GGS) since the present case exhibited three major criterias.

Gorlin-Goltz syndrome (GGS) is a rare autosomal domi-nant disorder that involves multiple organ systems, in-cluding the skin, skeleton and jaws. Odontogenic kerato-cysts. bifid ribs and nevoid basal cell carcinomas are the hallmark of the disease.[1-4] Jarisch White in 1894 first reported regarding the association of nevoid basal cell carcinoma with skeletal anomalies as cited by Fitz Patrick PJ.[2] It was in 1960, Gorlin and Goltz established a clas-sical triad that characterises the diagnosis of this syn-drome which included multiple basal cell carcinomas, keratocysts in the jaws and bifid ribs and hence the name.[3] We present a rare case of Gorlin Goltz syn-drome.

A male patient aged 15 years reported to clinics of Jaipur Dental College, Jaipur, with a complaint of swelling on the right lower jaw since one year. The swelling slowly progressed to the present state which the patient noticed only when visible facial asymmetry occurred. 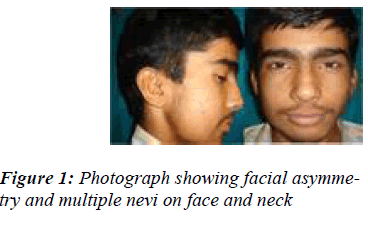 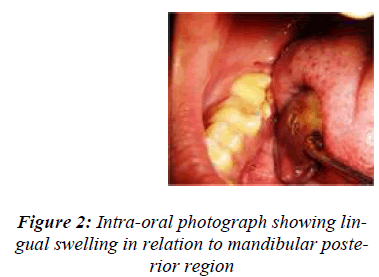 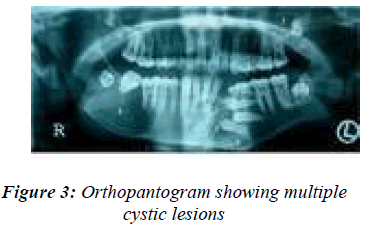 Then out of suspicion, face and other parts of the body were thoroughly examined which revealed multiple nevi on the face, neck and back region (Figure 1). It was de-cided to go for a chest radiograph as he exhibited pigeon shaped chest (Figure 4). The chest radiograph confirmed the presence of bifid ribs (Figure 5). His hands and feet were searched for any palmar and plantar pits which were not found. CT scan was advised for proper treatment planning. The findings of the CT scan revealed multiple cystic lesions in both the jaws. 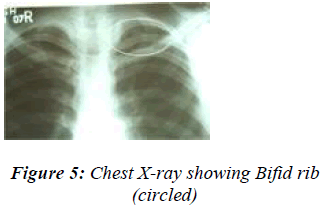 Surgical treatment with enucleation of all cystic lesions was done under general anaesthesia with peripheral ostec-tomy and chemical cauterisation with Carnoy’s solution (Figure 6). All the five samples of the cystic lesions along with the involved teeth were sent for detailed histopathological investigations to Department of Oral Pathol-ogy (Figure 7). Based on the histological features it was diagnosed as Odotogenic Keratocyst (Figure 8). Similarly other two specimens were also diagnosed as infected Odotogenic Keratocyst with daughter cyst, one with Odontogenic Keratocyst and Dentigerous cyst. Correlat-ing with the clinical, radiographic and histo-pathological features, it was diagnosed as Gorlin Goltz syndrome. 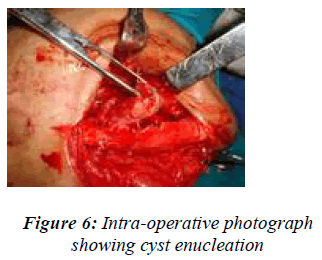 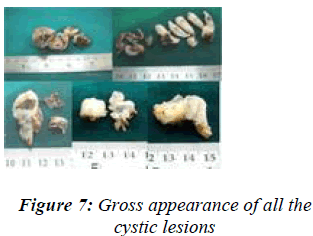 Figure 7: Gross appearance of all the cystic lesions. 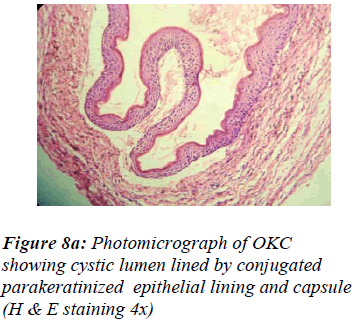 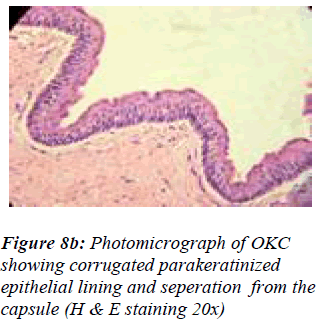 Gorlin-Goltz syndrome is an autosomal dominant inher-ited disorder with high penetrance and variable phenotype expressiveness which can manifest itself spontane-ously.[4,5] It is characterized by the development of multi-ple odontogenic keratocysts, frequently beginning in the second decade of life, and or basal cell carcinomas (BCCs) usually from the third decade onwards. Approximately 60% of individuals have a recognizable appear-ance with macrocephaly, bossing of the forehead, coarse facial features, and facial milia.

Most individuals have skeletal anomalies (e.g., bifid ribs, wedge-shaped vertebrae). Ectopic calcification, particu-larly in the falx ceribri, is present in more than 90% of affected individuals, cardiac and ovarian fibromas occur in approximately 2% and 20% of individuals respectively. Approximately 5% of children with GGS develop medul-loblastoma [6].

Since the syndrome is a hereditary condition, thus referral to a geneticist for counselling is mandatory. It is recom-mended to involve families in regular screening. It may be possible to prove whether someone in a family has inherited the condition or not by DNA tests, either by tracking the chromosome 9 containing the faulty gene, or by direct analysis of the mutation causing the disease in a particular family.

In our case, patient had three major criterias such as mul-tiple odontogenic keratocysts, bifid rib and multiple Nevi and hence it was diagnosed as Gorlin Goltz syndrome.

Early diagnosis of the syndrome is essential to treat it effectively and thereby minimising the complications. Interdisciplinary cooperation of oral and maxillofacial surgeons, oral pathologists, paediatricians, dermatolo-gists, and specialists in genetics is mandatory in the diag-nosis, treatment and follow-up of patients with Gorlin Goltz syndrome.