Here, we report a rare case of an 81-year-old man with bloody stools who was finally diagnosed with cytomegalovirus (CMV) proctitis. He was treated with steroids owing to the presence of idiopathic interstitial pneumonia, which was considered, on radiological examination, to be cryptogenic organizing pneumonia. After steroid administration, the pulmonary shadows improved. However, CMV proctitis was subsequently diagnosed by immunohistochemical staining of biopsied rectal tissues using an anti-CMV antibody, although 3 biopsies of the rectum were necessary for the final and correct diagnosis. This report describes a rare case of CMV proctitis in a patient with idiopathic interstitial pneumonia, treated by steroid administration. As demonstrated in the current study, clinicians should bear in mind CMV infection, especially in immunocompromised patients.

Cytomegalovirus (CMV) proctitis is a rare disease, and is usually an incidental finding in patients with diabetes mellitus [1,2], collagen vascular diseases [3,4], renal failure2, and immunosuppressive disorders [5]. CMV is also, but rarely, detected as a sexually transmitted disease [6].

CMV is usually considered to be an optimistic infection of organs such as the lungs, liver, kidneys, and, more rarely, the digestive system, and it can be fatal in some cases [2]. However, it is usually thought to arise from reactivation of cytomegalovirus (CMV) in immunocompromised conditions, from virus that has already infected the patient, although this has not been clarified in some cases [5].

In this study, we report a case of CMV proctitis detected in an elderly Japanese man with idiopathic interstitial pneumonia treated by steroid administration. This is a rare example of reactivation of CMV in an immunosuppressed patient.

In the present study, we report a case of an 81-year-old Japanese man diagnosed with idiopathic interstitial pneumonia and radiologically cryptogenic organizing pneumonia, who received oxygen inhalation and steroid therapy. Upon admission, he was diagnosed with renal failure (BUN: 50–70 mg/dL; creatinine: 2–2.5 mg/dL; uric acid: 7.7 mg/dL). After recovering from clinical symptoms of interstitial pneumonia, the patient complained of bloody stools, and endoscopic examination of the rectum revealed shallow erosions as the source of bleeding (Fig. 1a). Tissue biopsies were repeated 3 times in total during the patient’s 4-month admission, because a definite diagnosis could not be made. 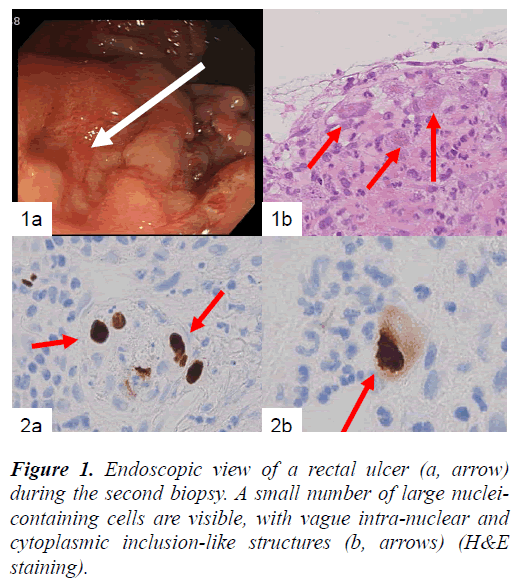 Figure 1: Endoscopic view of a rectal ulcer (a, arrow) during the second biopsy. A small number of large nucleicontaining cells are visible, with vague intra-nuclear and cytoplasmic inclusion-like structures (b, arrows) (H & Estaining).

The patient in the present study provided written informed consent, and the identity of the patient has been strictly protected.

Immunohistochemical examination was subsequently performed using a streptavidin biotin complex method, because at the time of the third biopsy, infection with CMV was suspected, despite no typical nuclear inclusions being detected in these tissues.

The large cells observed in rectal tissues were immunohistochemically negative for AE1/AE3, but some were positive for vimentin, and to a lesser extent, CD68. Antibody staining for alpha-smooth muscle actin, S100 protein, and MIB-1X was negative. Therefore, these large cells might be immature mesenchymal cells in the process of differentiating into fibrohistiocytic cells.

Finally, large mesenchymal cells of the first and second biopsied tissues were positive for anti-CMV antibody, but samples from the third biopsy were not. Both HSV-I and HSV-II antibodies were negative for large cells in all of the biopsied tissues. CMV-positive cells included a small number of endothelial cells (Fig. 2a) and a large number of mesenchymal cells (Fig. 2b) and cryptic cells. CMVpositive reactions were detected in both the nuclei and cytoplasm of large cells located in the propria mucosa (Fig. 2b). Samples of the patient’s serum were retrospectively examined by enzyme immunoassay (EIA), and CMV IgM (EIA) had a borderline increase (0.95).

Based on these results, we concluded that this was a case of CMV proctitis in a patient with idiopathic interstitial pneumonia treated with oxygen inhalation and steroids. After discharge, he died from pneumonia, possibly superimposed by a fungal infection. His β-D-glucan titer was more than 200 ng/mL at discharge.

Young patients with immunosuppressive conditions and older patients with diabetes and chronic kidney diseases are more vulnerable to CMV infection7. Among patients with inflammatory bowel diseases, CMV infection occurs more frequently among ulcerative colitis patients than among Crohn’s disease patients, in both biopsied and resected materials8. In these cases, the inclusions were always detected at ulcer edges or erosions9, suggesting the CMV origin of these lesions. CMV infection likely occurred with the preceding injury, and once these injuries heal, CMV infection disappears10. Patients with collagen vascular diseases [3,4] such as systemic lupus erythematosus and polymyositis are generally at an increased risk for CMV infection.

In our report, because the CMV-infected cells did not display the typical nuclear inclusions with a clear halo, final diagnosis was difficult. Immunohistochemical staining using the labeled streptavidin-biotin complex method was useful for the final diagnosis in this case. CMV-positive cells included cryptic cells, large mesenchymal cells, and endothelial cells in this case, and this has been reported by other studies [11].

The immunosuppressive effects of steroid therapy might have been favorable for the reactivation of CMV, and also the fungal infection, which resulted in the death of this patient.

Clinicians should consider the possibility of CMV infection in patients with intestinal erosions complaining of bloody stools, especially if the patient is immunocompromised. Earlier diagnosis may help improve patient prognosis.

The authors are grateful to Mrs. Y. Matsuka, Ms. W. Tanihata, and Mrs. M. Izumimoto for their technical assistance and to Ms. K. Matsushita and Ms. K. Takasuka for their secretarial assistance.