Case report: A pedunculated hamartomatous polyp of the palatine tonsil

A 41 year old female had been found to have swelling of the right palatine tonsil approximately 6 years previously. She had pronounced sneezing and transient episodes of apnea during sleep. A pedunculated polyp connected to the original palatine tonsil by a distinct stalk was surgically extirpated, and was 3.8×1.5×1 cm in size, with a whitishyellow cut surface. This lesion was covered by squamous epithelium with marked edema and slight surface keratinization. Within the lesion, there was loose fibrous tissue containing fibroblastic cell proliferation, lymph follicles, and/or follicle-like lymphocyte aggregations, lymphoid cell infiltration, and many small blood and lymph vessels, as well as small amounts of fatty tissue. Interestingly, S-100 proteinpositive lymphocytes were commonly found among clustered lymphocytes in the lymph vessels. In the stalk connecting the polyp to the original tonsil, a thickwalled artery was found. The histopathological diagnosis was pedunculated hamartomatous polyp of the palatine tonsil. The general character of this lesion, although it did not include a large amount of lymphoid tissue, was essentially similar to tonsillar tissue, and it appeared to be hamartomatous in nature.

Pedunculated polyps of the palatine tonsil are relatively rare. Terms used for them in the English literature include lymphangiectatic fibrous polyp [1], polypoid lymphangioma [2], angiofibrolipoma [3], pedunculated squamous papilloma [4], hamartomatous tonsillar polyp [5,6], pedunculated tonsil [7], lipoma [8,9,10], lymphangiectatic fibrolipomatous polyp [11], lymphangiomatous polyp [12], and others. Here, we use the term pedunculated hamartomatous polyp of the palatine tonsil, because the terms noted above, most of them depend on the mesenchymal components included in these lesions, some of which were fundamentally similar to those in the original tonsil, indicating that these lesions are hamartomatous in nature as discussed below. We therefore employed the term pedunculated hamartomatous polyp, with special reference to the morphogenesis of the fatty tissue in the lesion. Moreover, within lymph vessels, we found many S-100 proteinpositive lymphocytes. This is of interest, since only in rare cases S-100 protein-positive lymphocytes have been detected in lymph vessels of other tissues or organs.

A 41 year old woman was found to have a swelling of the right palatine tonsil approximately 6 years previously, but was not treated medically for it. She then developed prounced sneezing and transient episodes of apnea during sleep with increase in body weight. The right tonsil was surgically extirpated, and found to exhibit a yellowish pedunculated polyp, 3.8 X 1.5 X 1cm in size, extending from the original tonsillar tissue, with a whitish-yellow cut surface, and bilobed pattern at the top (Fig. 1). The extirpated palatine tonsillar tissues including the polyp were fixed in 10% formalin solution, and after fixation dissected for histopathological sectioning followed by dehydration with graded alcohols and embedding in paraffin. Dewaxed sections were stained with Hematoxylin and Eosin solutions. Then, immunohistochemical staining employing the streptoavidinbiotin complex (SABC) method (Labelled SAB kit from Dako, Kyoto, Japan) was performed using the kit manual with antibodies to L26 (Dako; dilution 1:200), UCHL-1 (Dako; dilution 1:50), CD34 (Becton-Dickinson; dilution,1:10, with 0.1% pronase pretreatment at 37C for 20 min), and S-100 protein (Dako; dilution 1 :200), each of which was commercially purchased. 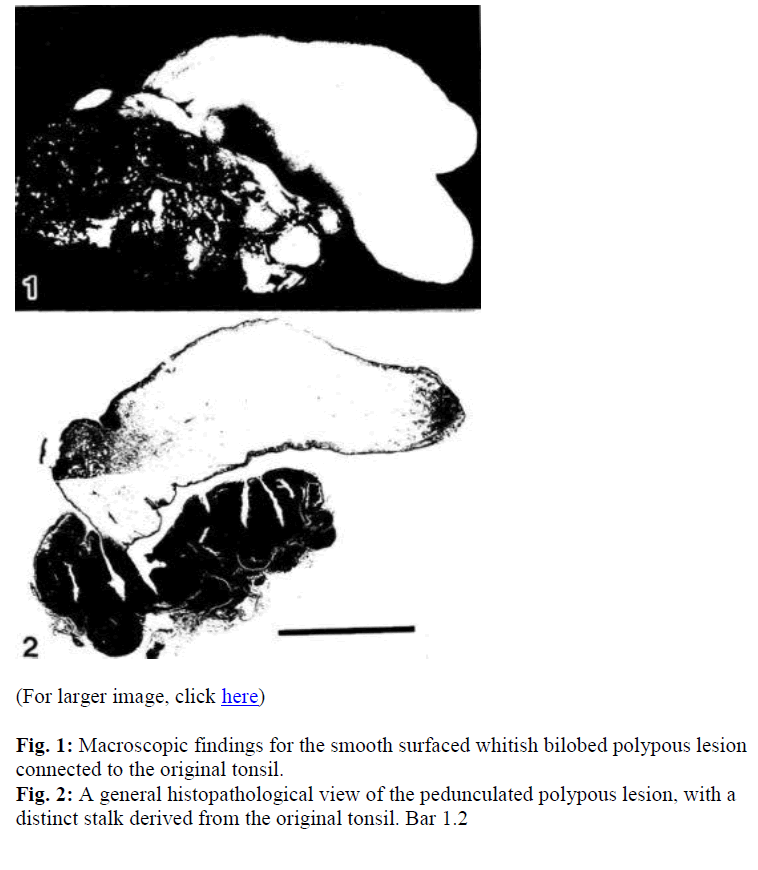 Macroscopically, the pedunculated polyp was whitish and smooth on the surface, with a partially bilobed pattern (Fig.1). This lesion originated from the palatine tonsil, and was clearly connected to the original tonsillar tissue by a stalk (Fig. 2) and covered by squamous epithelium with slight surface keratinization (Fig. 3). In the stalk region, both the polyp and the original tonsil were covered by normal squamous epithelium, with a thick-walled artery within the narrow space of the stalk (Fig. 4). Inside of the lesion, a large amount of loose fibrous tissue was present containing lymph follicles and/or follicle-like structures in parts, with diffuse lymphoid cell infiltration, many dilated small blood and lymph vessels (Fig. 5), as well as scattered fatty tissue (Fig. 6), which was mainly found in the top half of this lesion along with lymphoid tissue. Aggregated lymphocytes were positive for L26, and UCHL-1-positive lymphocytes had diffusely infiltrated the polypous lesion. CD34-stained endothelial cells were present in blood vessels and some lymph vessels. Interestingly, S-100 protein positive lymphocytes (Fig. 5 inset, arrows) were commonly found among clustered lymphocytes in the lymph vessels. The histopathological diagnosis was pedunculated hamartomatous polyp of the palatine tonsil. 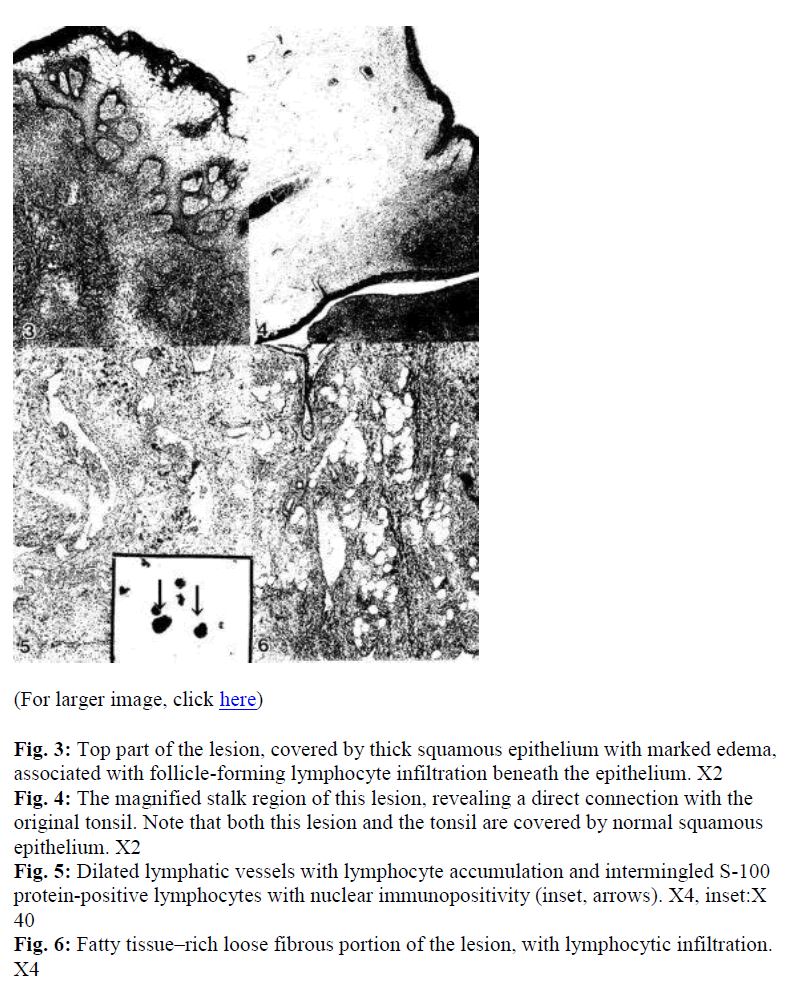 Fig. 3: Top part of the lesion, covered by thick squamous epithelium with marked edema, associated with follicle-forming lymphocyte infiltration beneath the epithelium. X2
Fig. 4: The magnified stalk region of this lesion, revealing a direct connection with the original tonsil. Note that both this lesion and the tonsil are covered by normal squamous epithelium. X2
Fig. 5: Dilated lymphatic vessels with lymphocyte accumulation and intermingled S-100 protein-positive lymphocytes with nuclear immunopositivity (inset, arrows). X4, inset:X 40
Fig. 6: Fatty tissue–rich loose fibrous portion of the lesion, with lymphocytic infiltration. X4

Pedunculated polypous lesions of the tonsil, although reported using various types of nomenclature, are relatively rare lesions. In the literature, descriptions of this lesion as angiomatous [5], lymphangiomatous [2,12], fibrous [1,3], lymphangiectatic [1], and lipomatous [8,9,10] are found. However, among tissue components in such lesions, the blood vessels, lymph vessels, and loose fibrous tissue as well as lymphoid cell aggregation appear to be similar to those in normal tonsil. In fact, a case of torsion of a polypous normal tonsil has been reported [13]. If the lymphoid tissues were removed from normal tonsil, the components noted above would remain as the polypous lesion reported here, except for fatty tissue. This is one of the reason these lesions are considered hamartomatous in nature. In fact, a hamartomatous origin of these lesions has been suggested in the literature [5,6,11]. In the narrow stalk region, a thick-walled artery was found with a narrow cavity due to perivascular increase in collagen fibers and smooth muscle hyperplasia. Moreover, the polyp appeared to exhibit poor blood flow and chronic inflammation, reflected in the dilatation of lymph and blood vessels inside of it, as also reported for a previous lesion as well [1]. Fatty tissue was detected in the top half of the lesion, suggesting that ischemic change had probably occurred there as a result of degeneration or tissue metaplasia during the long clinical course. Terms used in the literature such as polypoid lipoma [8], angiofibrolipoma [3], and tonsillar lipoma [10] all depend on the lipomatous components detected in this type of lesion. Over time, fatty components might increase, as in a lipoma or fibrolipoma, as also reported previously [3,8,10].

If lymphatic or blood vessels are conspicuous in the lesion, terms such as lymphangioma [2], lymphangiectatic fibrolipomatous polyp [11], and lymphangiomatous polyp [12] are used for the lesion. Unlike pedunculated squamous papilloma [4], squamous epithelium was not a proliferative component in the present lesion. The histogenesis of this lesion is unclear, though it appears to be preceded by polyps in the original tonsils, such as hamartomatous tonsillar tissue similar to that found in normal tonsil [13].Judging from these findings, these lesions, including the present one, are nonneoplastic rather than truly neoplastic.

In conclusion, we have reported a polypous lesion found in the right palatine tonsil, for which the term pedunculated hamartomatous polyp appears appropriate, indicating its nonneoplastic nature. 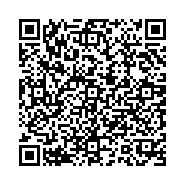