Choristomas, which are defined as normal tissue growth in an inappropriate position, include ocular lipodermoid cysts and solid dermoid tumors. Adipose tissue is covered by connective tissue in congenital epibulbar lipodermoid. They're frequently seen super temporally, and they don't usually affect the peripheral cornea. if the dermoid or lipodermoid is accompanied by other systemic disorders or ocular defects in young children, we must rule out Goldenhar syndrome, which is an oculoauriculovertebral dysplasia. This research describes healthy adult female, with unilateral lipodermoid cyst of a unique caruncular etiology and mullerian agenisis.

Lipodermoids are solid tumors under the conjuctiva in the superior temporal quadrant of the globe. It is yellowish white tumor extending backwards and upwards which is composed of addipose tissue and dense connective tissue Lipodermoids are congenital choristomas derived from sequestration of ectoderm at the time of embryonic development [1]. Ocular choristomas are congenital tumors that appear as mature, normal tissue in an inappropriate location. The episcleral osseous choristoma, limbal dermoid, lipodermoid, ectopic lacrimal gland, and episcleral osseous choristoma are among them [2]. The most frequent orbital and epibulbar tumors in children are lipodermoids and dermoids. They can damage the cornea, limbus, and bulbar conjunctiva, among other parts of the eye [3].

An 18-year-old woman came to ophthalmology consultation the clinic complaining of a white lump on her right eye. The patient stated that she had no additional visual issues and had no previous medical or ocular abnormalities. There were no allergies or drug use to be found. There was additional congenital anomalies in the patient (mulerian agenisis).

On inspection the extra ocular muscles motility were normal, no ptosis, and her vision in both eyes was 1.0, and afferent pupillary defects were absent. The slit-lamp examination revealed that the cornea was clean, the anterior chamber was deep and no cells, pupil was round in shape, equal in size and reaction and reactive to light and lenses were clear. Fundoscopy revealed a normal optic disc, normal macula, and peripheral fundi.

A white- yellowish avascular lesion of 15x20 mm with two to three hair follicles within the lesion was found over the right eye's caruncular area Picture Figure 1. 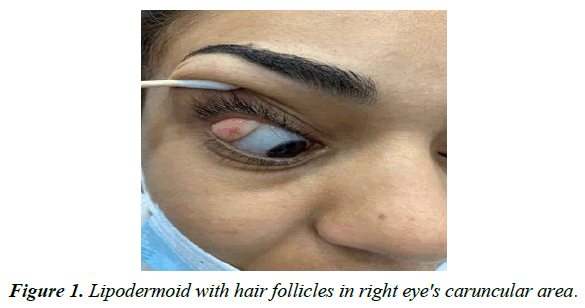 MRI of the orbital region showed right sided focal fatty soft tissue of about 18x17x5 mm size seen on the superio-lateral aspect of the globe below the lacrimal gland and anteriosuperior to the lateral rectus muscle Figure 2. 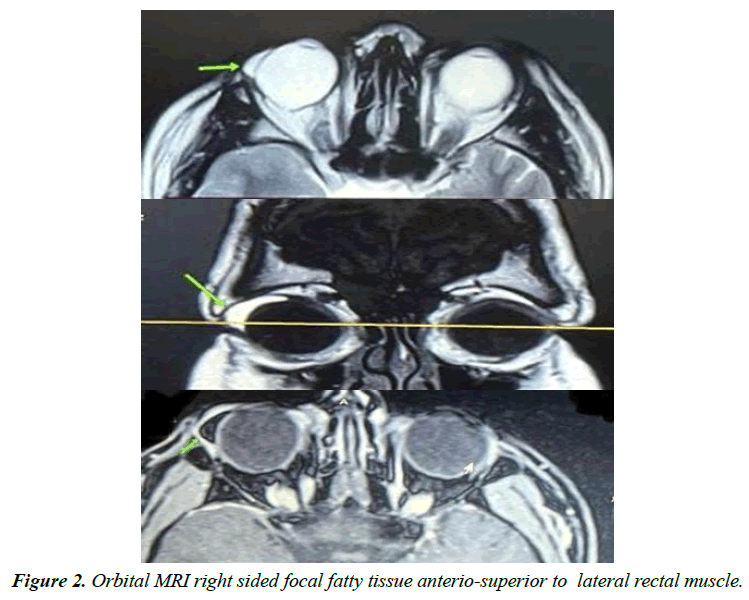 The surgical procedure for removing the lesion was under general anesthesia as follows: putting Williams eye speculum to open the eye, injection one milliliter plain 2% lidocaine between mucosa and the lump to be separated easily, an incision between the plica semilunaris and the caruncle was done, a dissection between the mass and the mucosa was performed with Westcott scissors, and adhesions between the conjunctiva, plica, and caruncle were released. The lesion was attached to sclera and lateral rectus muscle, so the dissection done carefully to separate the lesion and extract it finally then the incision was sutured by 8-0 silk Figure 3. 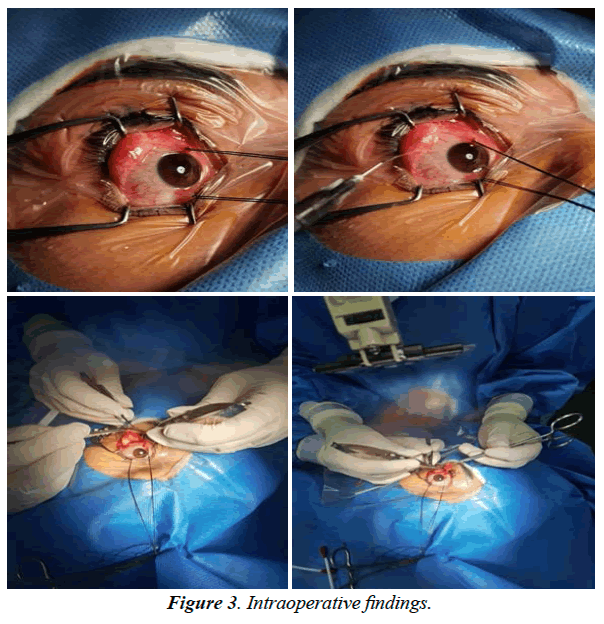 Follow up started, and after a week the stitches were removed. Histopathology examination showed ipodermoid Figure 4. 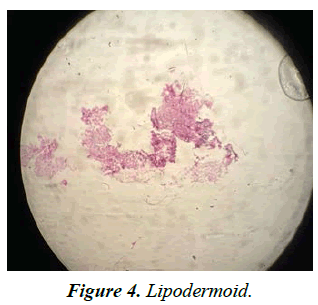 Lipodermoid are rarely need surgery in the current case it was removed for cosmetic reasons and interference with lid functions. Lipodermoids in most cases are seen superiotemporally and it is important to insure the patient that the lesion is harmless. Lipodermoids and epibulbar dermoids are choristomas containing epithelium-derived tissues [2].

Because of its deep fatty layer, dermolipoma, which has been used interchangeably with lipodermoid, has a yellow clinical appearance [2]. Goldenhar-Gorlin syndrome should be considered in the presence of lipodermoids and any other ocular abnormalities or systemic disorders [10,11].

This uncommon congenital syndrome appears at random and is not inherited, In spite of that, chromosomal abnormalities and genetic transmission (autosomal dominant) have been recorded [12,13]. Ocular anomalies, auricular appendages, aural fistula, and vertebral anomalies are among symptoms of the disease, which was initially described by Goldenhar in 1952 [14].

The epibulbar conjunctiva is commonly affected by lipodermoid cysts and solid dermoid malignancies. Dermoids were infrequently found in two retrospective histopathologic examinations of caruncular lesions [14]. The current case of lipodermoid associated with cyst's caruncular genesis. A caruncular dermoid linked to the upper eyelid was reported by Ghafouri et al., along with epibulbar hemorrhage [15]. When lipodermoids interfere with appropriate lid function, excision may be necessary [10]. Lipodermoids are seen superotemporally in most cases. It's important to persuade these people that their illness is harmless.

The authors have no conflicts of interest to declare that are relevant to the content of this article.