The purpose of this study was to apply Scutellariae radix extract herbal medicine to dental practice and to investigate the effects of Scutellariae radix extract on dental caries. After adding Scutellaria radix 500 g to 70% methanol, extraction was done for 3 h, and the extract was filtered and then lyophilized. This study was conducted after obtaining the approval of the IRB of Inje University (No. 2-1041024-AB-N-01 - 20140514-HR-055-04; approval date: 2014-08-27). Among the patients who visited M Dental Clinic located in Busan, South Korea from January 2015 to January 2016, and who did not have any systemic disease, 180 patients were included in this study after excluding those with incomplete data. The subjects were divided into the 0.9% saline (JW Pharmaceutical) gargling group (60 persons), the 0.005% chlorhexidine (Bukwang Pharm) gargling group (60 persons), and the 10% Scutellaria radix gargling group (60 persons). Before gargling, the patients’ simplified oral hygiene index (S-OHI), dental caries activity test value, and amount of coccus were measured. After gargling with 15 ml gargling solution for 1 min, the subjects were instructed to spit saliva for 1 min to completely remove the gargling solution, without leaving any residue, and then the variables were measured again. The study results showed that the S-OHI, Alban test value, and amount of stretococcus mutans (S. mutans) decreased in all the groups compared to before gargling. In the comparison of the three groups, however, no significant differences were found in the S-OHI, Alban test value, and amount of S. mutans before gargling (P>0.005) while significant differences were found in the S-OHI and Alban test value after gargling (P<0.005). It is believed that the use of the natural extract Scutellaria radix for gargling instead of chlorhexidine, which contains chemical ingredients with side effects, will enable safe and effective oral management.

Dental caries is an infectious disease that is deeply related to bacterial activity because the sugar component remaining on the tooth surface in the oral cavity is changed into acid by bacteria, which corrodes the tooth [1]. There are various kinds of microorganisms in the mouth, but a gram-positive bacterium, Streptococcus mutans (S. mutans) is most closely related to dental caries. S. mutans is facultative anaerobic; resides in the oral cavity, adhering to the tooth surface due to its adherence ability; and is found in dental plaque [2]. Various methods have been used to remove, inhibit, or kill S. mutans to prevent dental caries, but it is difficult to completely remove it with only a physical method, using a toothbrush [3]. To compensate for this, mouthwash has been used as a chemical plaque control method. Mouthwash is widely used as an oral hygiene auxiliary product because it is easy to purchase, easy to use, and easy to carry [4].

The mouthwash that is most commonly used in dental practice is chlorhexidine, an antibiotic used to extensively suppress microorganisms, including gram-positive and gram-negative bacteria, yeast, fungi, anaerobic strains, etc. [5,6]. Gargling with chlorhexidine reduces the occurrence of hospital-acquired infection during the oral care of critically ill patients who have difficulty brushing their teeth, due to its excellent antimicrobial activity [7], and decreases the oral bacteria incidence [8]. Chlorhexidine, however, has side effects, such as tooth coloring or a disturbing taste when used for a long time; thus, care is required when using it [9,10]. As the use of chemical antibiotics may disturb the oral micro-ecosystem and may cause bacteria with resistance [3], studies on the inhibition of microorganisms using natural extracts that can replace antibiotics have been actively carried out of late.

The extracts of herbal medicines, including the mixture of Coptidis rhizoma, Magnoliae cortex, and citric acid [11], grapefruit seed, Cassiae torae semen, and Angelicae gigantis radix [12], have been reported to have an inhibitory effect on the growth of S. mutans. The polyphenol components of Japanese green tea extract [13] and oolong tea have been reported to show an anti-caries effect [14]. As Kochia scoparia schrad. and Scutellaria radix [15], other medicinal herb extracts, also showed an anti-caries effect, more and more studies are attempting to identify the anti-caries properties of natural extracts. In particular, the native plant Scutellaria baicalensis George, which is known to have biological protection activity due to its excellent antioxidant effect, has yellow roots, and its effects on various kinds of inflammation have been reflected in Oriental medical literature. Baicalin, baicalein, and wogonin are known as major ingredients, and especially, the high antimicrobial activity of baicalin has been confirmed in the analysis using LCMS [16]. With regard to Scutellaria radix, there has been a study on its growth inhibition effect on food poisoning bacteria [17] and a study on its freshness maintenance effect on agricultural and fishery food materials [18]. There are almost no oral-related studies. Moreover, studies on mouthwashes made of natural extracts have been actively conducted, but the studies comparing them with mouthwashes made of chemical ingredients used in dental practice are insufficient. In addition, there have not been many studies on dental caries closely associated with the oral hygiene index, caries activity, and the amount of bacteria in the mouth, and the clinical data that have been produced through the clinical approach and application are very insufficient.

Therefore, this study aimed to compare the anti-caries effect of Scutellaria radix extract with that of the existing mouthwash containing chemical ingredients by measuring its minimal inhibitory concentration (MIC), and to evaluate its caries prevention effect and potential as a natural mouthwash.

To measure the antibacterial activity, Streptococcus mutans (S. mutans; KCTC 3065/ATCC 25175) was cultured in brain heart infusion (BHI) broth (BD Bioscience, Franklin Lakes, NJ). S. mutans was used for the experiment after the subculture in the culture broth, which was anaerobically incubated in the BHI broth at 37°C for 24 h.

For this experiment, 500 g Scutellaria radix was purchased from Busan Hyundai Pharm Co., Ltd. After adding 70% methanol 10 times to 100 g crushed Scutellaria radix, extraction was done in a heating mantle at 65°C for 3 h. The extract was filtered 3 times using filter paper (Adventec, Toyo No. 2, Japan), and the Scutellaria radix extract was concentrated and lyophilized using a rotary vacuum evaporator (N-Nseries, EYELA Co., Japan), an aspirator (A-3S, EYELA Co., Japan), and a freeze dryer (Ilshin Lab Co., South Korea). The lyophilized sample was dissolved in 10% dimethyl sulfoxide (DMSO) and was stored at -20°C after dilution.

The study was conducted on the patients who visited M Dental Clinic located in Busan, South Korea from January 2015 to January 2016. A dental hygienist with more than 10 years’ experience directly explained the study purpose, and among the patients who gave consent to participation in the study, 180 patients who did not have any systemic disease were included in the study after excluding those with incomplete data. For the 60 subjects in the 0.9% saline (JW Pharmaceutical) gargling group, the 60 subjects in the 0.005% chlorhexidine (Bukwang Pharm) gargling group, and the 60 subjects in the 10% Scutellaria radix gargling group, the dental caries variables were checked before gargling. After gargling with 15 ml gargling solution for 1 min, the subjects were instructed to spit saliva for 1 min to completely remove the gargling solution, without leaving any residue, and then the dental caries variables were measured again. This study was conducted after obtaining the approval of the IRB of Inje University (No. 2-1041024-AB-N-01 – 20140514-HR-055-04; approval date: 2014-08-27). Before gargling, the simplified oral hygiene index (S-OHI) was measured, the dental caries activity test was performed, and the amount of S. mutans was measured with a phase contrast microscope in the saline gargling, chlorhexidine gargling, and Scutellaria radix gargling groups. The X1 group gargled with 15 ml 0.9% saline for 1 min, the X2 group gargled with 15 ml 0.005% chlorhexidine for 1 min, and the X3 group gargled with 15 ml 10% Scutellaria radix for 1 min. After saliva was spitted for 1 min to completely remove the gargling solution, without leaving any residue in the mouth, the variables were measured again.

To determine the type of microorganisms, a sterile probe was used to collect the supragingival and subgingival dental plaque of the mandibular left and right posterior lingual surfaces. Then the dental plaque was placed on the slide, and a drop of normal saline was dropped. After the slide cover was mounted to prevent air bubbles, it was observed with the phase contrast microscope (DCS6002, Doctor Prevent Co., Seoul, South Korea) at 4300X magnification. The movement of the live microorganisms in the mouth was vividly observed through a monitor without staining them. The relative increase of S. mutans may proceed with dental caries.

The statistical analysis for the saline gargling, chlorhexidine gargling, and Scutellaria radix gargling groups was performed with IBM SPSS ver. 21.0 (IBM Co., Armonk, NY, USA). To verify the significance of the differences among the groups in the amount of coccus that was quantitatively analyzed in the program for the analysis of the microorganisms observed through the phase contrast microscope, the S-OHI, and the Alban test value, one-way ANOVA and Tukey’s test as a post-hoc test were performed at a 0.05 significance level.

The measurement of the MIC by applying Scutellaria radix extract at each concentration showed that the growth was inhibited at the concentration of 10 mg/ml (Figure 1). 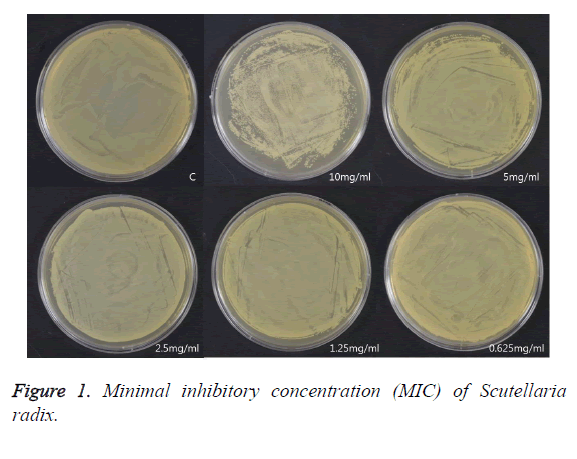 Comparison of the Alban test results 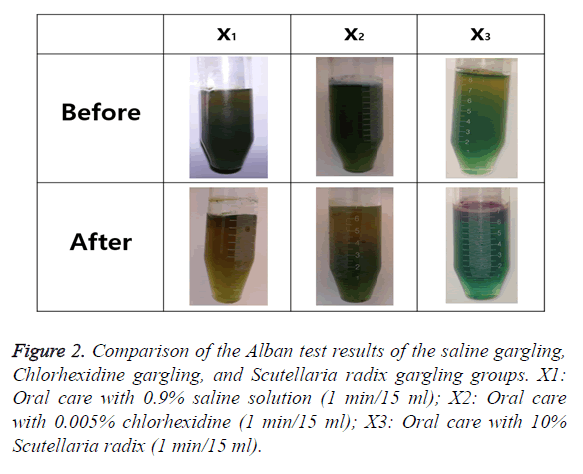 Comparison of the S-OHI and amount of S. mutans

As scaling has been covered by the health insurance since July 2013, the interest in individuals’ oral health has increased, and oral prevention has become more important. Although education about the cause and prevention of oral disease is given, the existing toothbrush instrument (TBI), which is performed in dental practice, has many limitations. It is difficult to completely remove S. mutans, a causative organism of dental caries, by tooth brushing, and it is very difficult to lower its activity [19]. Therefore, in combination with the physical method using tooth brushing, the method using chemicals should be applied. Chlorhexidine, which is widely used in dental practice, is a strong antimicrobial agent in the bisguanide class [20] and is known to selectively inhibit S. mutans [21]. In addition, it is used for the treatment of stomatitis and is widely used as an endodontic disinfectant [5]. When used continuously, however, chlorhexidine causes side effects, such as burning sensation on the pigmented oral mucosa and tongue or teeth coloring. Therefore, a mouthwash made of a natural extract is desperately needed to replace it.

As the interest in mouthwashes made of natural extracts has increased due to the report on the side effects of mouthwashes made of chemical ingredients, studies on mouthwashes utilizing natural extracts have been actively conducted of late. Pine needles and pine tree branches [22], Akebia quinata [23], Juniperus rigida [24], Sophora flavescens [25], Artemisia lavandulaefolia essential oil [26], unripe apples [27], and Coptis chinensis (Franch) [28] were reported to have an excellent inhibition effect on the growth of S. mutans. Among them, Scutellaria radix [29] was reported to inhibit the growth of S. mutans and to reduce its adherence to the saliva-coated hydroxyapatite bead.

Chlorhexidine has been widely used for oral management by patients with a poor oral hygiene status, but it has many side effects. Thus, the proper use of Scutellaria radix extract will help prevent dental caries, and such extract will replace chlorhexidine-containing antibiotics in terms of the anti-caries effect in the future.