Introduction: Levetiracetam is indicated as monotherapy in the treatment of partial onset seizures. Levetiracetam overdose has many neurological and psychiatric issues, but rarely cardiovascular toxicity. We report a large ingestion of levetiracetam drug in the patient with Bonsai addiction that resulted in arrhythmia and Myocard Infarct (MI).

Case Report: A 39 year old addicted male patient was brought up to emergency and presented oral ingestion of 16 g levetiracetam with arrhythmia, bradycardia and hypotension. Depression of D2, D3, and AVF ST Segments was present at second electrocardiogram, and revealed left ventricular hypokinesis. The patient urgently underwent angioplasty. The occlusion rate of the LAD coronary artery was at the level of 90%.

Discussion: Our report regrets this common acceptance of Levetiracetam overdose with one exception, in case of existence of addictive substance history. If the patient has an addictive substance history, which has potential to cause endothelial or atherosclerotic deterioration. Levetiracetam overdose may lead to fatal outcomes such as myocardial infarction by provoking occlusion.

Levetiracetam is suggested as mono-therapy in the care of short while ago diagnosed epilepsy by the whole of partial outset seizures or without secondarily generalized in new adults [1,2]. As well known, some suicide attempts have been papered for the patients used antiepileptic drugs like levetiracetam [3]. Many serious findings such as aggression, respiratory depression and coma were commonly encountered by levetiracetam overdose [4]. Since no specific antidote is currently available for levetiracetam, the unique treatment will be symptomatic in acute overdose care [5].

The best of our knowledge, there is one cardiovascular toxicity case of Levetiracetam presented with bradycardia and hypotension [6]. We here reported a case with acute ST-Segment Elevated Myocard Infarct (STEMI) due to large ingestion of levetiracetam.

A 39-year-old addicted male patient was brought up to emergency by his relatives. The patient had orally received 16 g levetiracetam (16 tablets of 1000 mg; Epixx tablet, Abdi Ibrahim Pharmacy, Turkey) approximately 4 hours ago. He was a slight confit and nausea. Considering the ingested amounts and patient’s admission time, approximate levetiracetam concentration should be about 124 mg/ml 8 h post ingestion (absorption coefficient, 1.32 h-1, volume of distribution, and half-life elimination of 10 h; therapeutic range 10-40 mcg/ml). The case had a Glasgow Coma Scale of 14 with heart rate of 65/min (bpm) and blood pressure of 95/60 mmHg. His initial Electrocardiography (ECG) was arrhythmic with incomplete right bundle branch block and had no acute ischemic findings. In his history, there was no chronic disease. 1 g/kg of active coal was given through a nasogastric tube.

He complained chest pain with hypotension and bradycardia at the 1.5th h. Blood pressure was 70/40, and pulse was 53/min. ST segment elevation in the anterolateral leads and reciprocal ST segment depression in the inferior leads were observed on the following ECG (Figure 1). Cardiology consultation was done with STEMI pre-diagnosis. We applied sublingual and intravenous nitroglycerin to exclude vasospasm, but the patient’s chest pain and ST elevation were not resolved. Emergency coronary angiography was performed via the femoral artery and showed occlusion of the proximal left anterior descending artery at 90% rates (Figure 2). The occlusion did not change after intracoronary injection of isosorbide dinitrate. There were no other stenotic lesions in the other coronary arteries. Based on these findings, percutaneous coronary intervention of culprit lesion with sirolimus eluting stent was performed. After the treatment of occlusion without any complication, Angio presented great healing (Figure 3). The patient discharged from the hospital four days later. 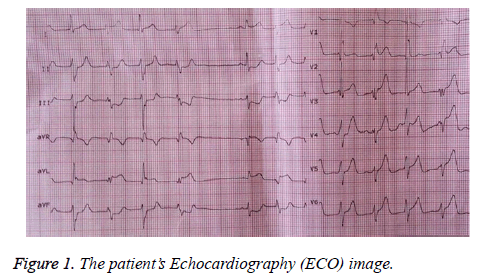 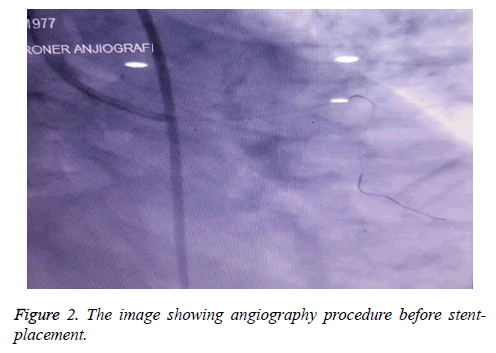 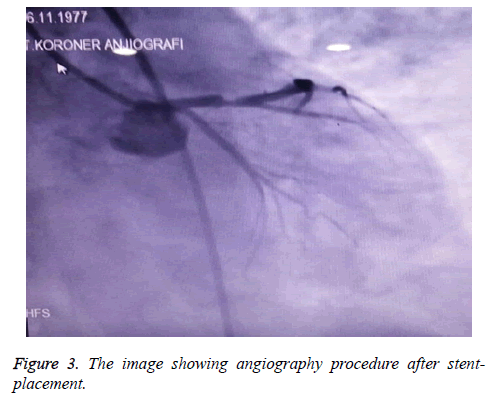 Bonsai is a synthetic derivative of cannabis, and we acknowledge that cannabis may result in vasospasm and slow flow in the coronary arteries, particularly in atherosclerotic segments. Koklu et al. also reported that vasoconstriction and endothelial dysfunction by using Bonsai might contribute to the pathophysiology of silent myocardial infarction [8]. Our patient’s history leads us he used bonsai for a long time and gave it up recently. Unfortunately, since no opportunity of biochemical analysis was available for measuring blood levels of the bonsai drug for the moment, we had no option except accepting his statement.

Levetiracetam overdose has many neurological and psychiatric issues, but rarely cardiovascular toxicity. If the patient has an addictive substance history, which has potential to cause endothelial or atherosclerotic deterioration, Levetiracetam overdose may lead to fatal outcomes such as myocardial infarction by provoking occlusion. Hence, prescribing Levetiracetam to the drug-addicted have potential mortality risks and should be avoided.