Human twins have always been of special interest to pediatricians and surgeons concerned with the congenital malformations. Thoracopagus twins, the most common variety of conjoined twin (75%) have in 90% of cases common pericardial sac for both twins. The previous attitude of considering this problem as rare medical curiosity has changed to that of a challenging congenital anomaly to be assessed and treated if possible. Thoracopagus twin survival depends on the site of union of the twins and the resultant fusion of their vital organs. A case of thoracopagus male twins, delivered by caesarean section on 37 weeks of gestation is presented here. The twin died after 24 hours of severe respiratory distress and acidosis. The twin was studied with a particular interest in the cardiovascular system, as it is one of the vital organs which influences the twin survival after successful separation. The twin shared a common pericardial sac and a shared heart. The heart exhibited 2 atrial chambers, placed caudally, each possessing 2 auricular appendages. The fused ventricle was placed cranially and consisted of 2 chambers and two aortic outlets for the two twins at its lateral end, respectively. These findings of the cardiovascular system arising out of the cardiac anlage, has been reported but the present case exhibited unique features. Furthermore, the mode of conjuction, as the degree of fusion laterally or in a facing position seems difficult to interpret in the present case and therefore its suggested that it could be the incomplete fission which may be responsible for the complexity of the cardiac morphology.

A conjoined twin pregnancy is a very special pathology in obstetrics and usually ends prematurely. Chances of survival and way of delivery depends on the degree of fusion of the organs and possibilities of surgical separation. Researchers have stressed on the diagnostic problems and the difficult decisions that they encountered. The degree of conjoinment in the case excluded surgical separation of the twins. A multidisciplinary team of experts decided to end the pregnancy at 31 wks by cesarean section. Delivery at a later term could increase the risk of uterine rupture and surgical complications [2].

Although most are externally symmetrical 75% of the thoracopagus have conjunction always involving the heart. The outcome of the surgical separation of the twin depends largely upon the serious cardiovascular anomalies [5]. Careful preoperative evaluation proper anesthesia and surgical technique, and postoperative care are essential to the successful separation of the a thoracopagus twin which was operated 21 day of age [6]. Separation of thoracopagus conjoined twins with a single heart and the twin reversed arterial perfusion sequence yielded a single surviving infant with a protuberant heart covered by ribs and soft tissue from the nonsurviving twin [7]. Taking into account the complex morphology of the heart which becomes the most vital organ during seperation of the twin and on survival of the both, the present case is reported with an emphasis on the complex cardiovascular malformation which were unique to each twin.

Report of a case

A forty two years old Nirmala devi, from Varanasi, Uttar pradesh, gravida 6 para 5 had presented with an emergency obstructed labour and underwent an emergency lower segment caesarian section at 37 weeks of gestation. The period of gestation was uneventful. She had no history of previous twin or twin in her family. There was no history of ingestion of drug. She had five children, three males and two females. The eldest being 12 year of age, all were normal and in good health.

The thoracopagus twin were male,(Fig. 1A) joined from sternum to the umbilicus over a distance of 15 cm weighing 3.7 Kg, living but with a very low apgar score. All the medical intervention could not revive the twin and they expired after 4 hours of delivery. One large placenta was delivered which was normal weighing 640g with a centrally attached umbilical cord having two artery and one vein, with one chorion and one amnion. The crown rump length of Twin A was 16.1 cm,its chest circumference 12.7 cm, and its head circumference 10.5 cm. Twin B had a crown rump length of 13.2 cm, chest circumference 12.9 cm, and its head circumference 10.5 cm.(Fig 1A). 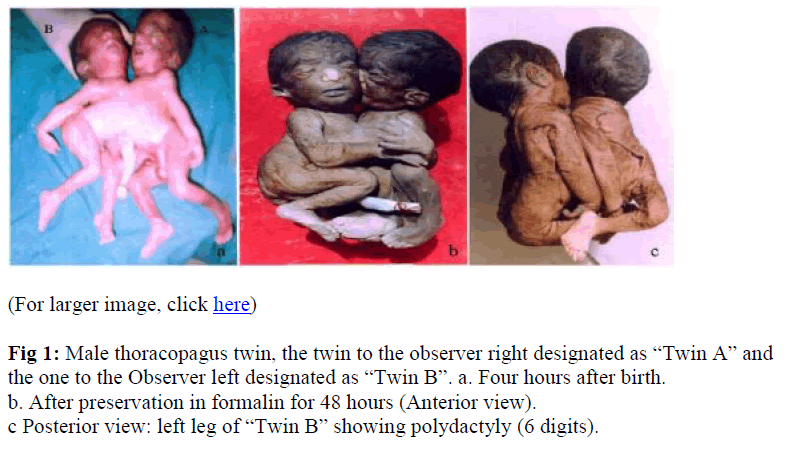 The thoracopagus twin was preserved in formalin following the consent of the parents (Fig 1 B).Though joined ventrally the twin faced each other somewhat obliquely, like a partially open book. The twin A (observer right) had two upper limbs and two lower limbs withy normal fingers and toes, while the twin B (observer left), had two upper and two lower limb with normal fingers and toes except for the left lower lmb which exhibited 6 digits and an hyperextended spine (Fig. 1C). Both the twin shared a common thoracic cavity with a fused sternum. The heart and the sternum were arranged in a plane right angle to the plane between the two spinal columns. In these cases the heart could not be assigned to either twin and therefore, it is referred to as the shared heart within a common pericardial sac weighing 16.5g. The heart was boat shaped with two aorta arising from each end. It exhibited both atrial and ventricle fusion.

The two atrium of the twin were fused in such a manner so as to form two chambers lying in a plane anterior and posterior of the twin. The atrium had retained its embryological relation, i.e, being caudal in position. The anterior chamber was smooth with inferior venacava of the twin B, the two pulmonary vein on each end of both the twin opening into it (Fig. 4). Two artrial appendages were present at each end just anterior to the pulmonary veins of both the twin. The interior of the anterior chamber was smooth except for two smooth ridges. The so formed interatrial wall had a well defined interatrial opening with fibrous tissue at its margin (Fig. 4 D).The posterior atrial chamber on the other hand had muscular wall, with well defined muscular pectinatae (Fig. 4E), into which opened the Superior vena cava and the inferior venacava of the Twin A, as well as the superior venacava of the twin B. It also had two atrial appendages at both its end (Fig.2B) both the chambers exhibited a cruciate arrangement with that of the ventricles (Fig. 4 F and 5). The arrangement of the atrial appendages were in such a manner that two of them flocked the proximal end of the aorta of both the twins.

Figure 2: a. Male Thoracopagus showing the shared thoracic(T) and abdominal cavity (Ab) with a common diaphrag (D) separating them The shared heart can be seen.
b. The thoracic cavity (T) of the male thoracopagus with the shared heart (H) aorta (AO2 and AO 1) projecting from its lateral edge, with four auricle (arrow). 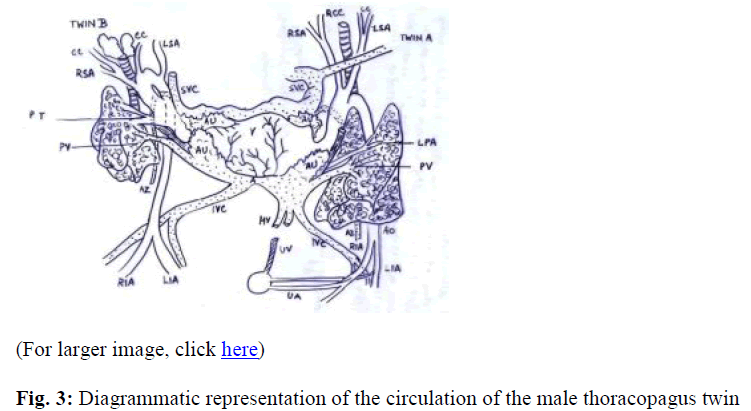 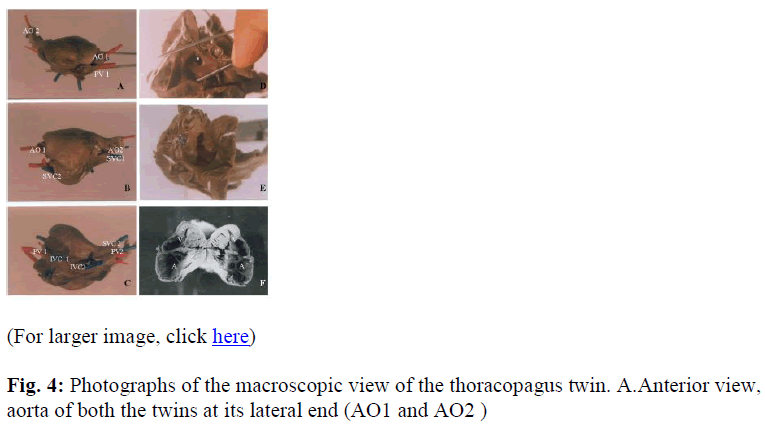 Figure 4: Photographs of the macroscopic view of the thoracopagus twin. A.Anterior view, aorta of both the twins at its lateral end (AO1 and AO2).
B. Posterior view,showing the openings of the superor vena cava( SVC 1 and SVC 2,blue wire) of both the twin and the separate openings at the lateral end for the aorta( AO 1and AO 2, red wire).
C. Inferior view, Openings of the inferior vena cava plugged with blue wire(IVC 1and IVC 2).
D. Interior of the anterior atrium showing the atrial septal defect (٭).
E. Interior of the posterior atrium showing the musculi pectiniti and the atrioventricular opening with cusps. F. Chambers of the heart, atrium(A) placed caudally and the ventricles cephalic(V). 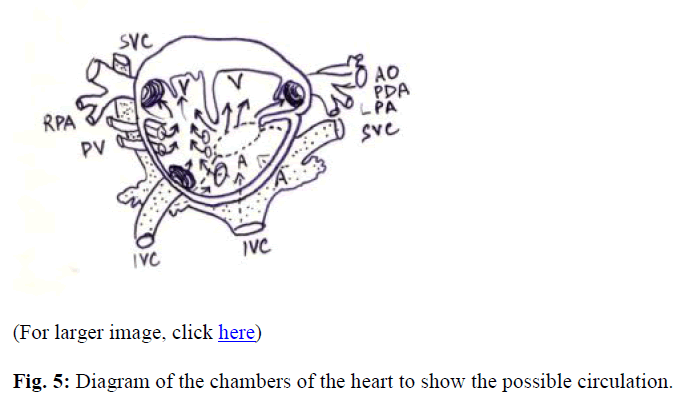 Figure 5: Diagram of the chambers of the heart to show the possible circulation.

The fused ventricle was present in cephalic position. They had a thicker muscular wall than the atrium. The fused chamber were so arranged so as to form right and left chambers (right towards observer right i.e., towards Twin A and left towards Twin B). The right chamber was separated from the left chamber by a well developed septum which had an interventricular defect The right chamber had a small hypoplastic chamber at its lateral side separated from the main chamber by a small separation and led to the outflow tract i.e., the aorta of the Twin A and the pulmonary trunk. The left chamber was the mirror image of the right chamber and it too had a hypoplastic side chamber leading to the aorta and the pulmonary trunk of the Twin B (Fig. 4 F). The normal development of both the twin had their equivalent size indicate that the oxygenated blood received through the atrial chamber was equally distributed by both the twin. Patent ductus arteriosus was present only in Twin A.Significant union of the coronary was present, with three arteries present on the anterior surface and two present on the posterior surface of the ventricle originating from a single coronary artery from the right Aorta (Fig. 2).

Conjoined twins are rare and account for 0.002% of live births and have 70% - 95% predilection for females [8,9]. In a review of eighteen pairs of conjoined thoracopagus twin, and stated the mode of conjunction was important factor in the formation of the cardiovascular system, as was the degree of fusion affecting the general morphology [10].

Our case was rare due to the fact that they were male twin, live born. They shared a single pericardial cavity with one heart and shared a single liver. It is believed that the organ formation in the early stages are under genetic control. But soon the internal mechanical factors form an important part of the internal environment and influences the organ formation [11]. Thoracopagus has been proposed to have been formed as the conjunction probably occurring when the two embryos come together head on and unite in the cardiac anlage resulting in the fusion of heart and the chest, both the twin sharing the upper abdomen and often the chest. The conjoined twin result from the development of two independent notochords initially destined to become separated twins too close together to develop independently, as such there must be an initial fission of the notochordal anlage with subsequent fusion of the embryos which develop around the vertical axes [1,12]. The final morphology of the twin depends on whether fusion is in lateral or in a facing position [13].

In the thoracopagus twins the single heart is multiventricular and suggests very early union with fusion of the cardiac anlagen before significant differentiation. Cardiac morphogenesis in conjoined twins therefore appears to depend on the site of the conjoined fusion and the temporal and spatial influence that determines morphogenesis as well as abnormally oriented embryonic axes [14]. However, Conjoined twinning occurs by the incomplete splitting of the embryonic axis and, with the exception of parasitic conjoined twins, all are symmetrical and “the same parts are always united to the same parts”. Fusion of monozygotic twins is no longer believed to be the basis of conjoined twinning [15,16].

The site of union of the heart is of particular importance when surgical interventions are to be considered. In this case the thoracopagus twin exhibited atrial as well as ventricular morphology abutting each other to such an extreme that it formed a shared heart with four chambers. The atrium in cruciate relationship to the ventricles, which was shared by both the twin. With the controversy of fusion or fission of the embryo resulting in conjoined twins, on the basis of the case report it could be proposed that the incomplete fission of the embryo has led to the cardiovascular anomalies and the surgical separation of the two twin even with the present advance in the surgical techniques would prove unsatisfactory.