Chronic Heart Failure (CHF) is the terminal stage of a variety of cardiac diseases and has a high rate of incidence and mortality. According to American Heart Association, the prevalence of CHF is expected to increase by 25% from 2010 to 2030 [1]. A large number of patients with CHF are refractory to optimal standard medical therapy. Medical devices to treat heart failure, including Cardiac Resynchronization Therapy (CRT) and Ventricular Assist Devices (VADs), can improve patients’ symptoms, quality of life, and survival by providing favourable effects on myocardial remodeling. However, the majority of patients with heart failure are not candidate for CRT or VAD because they have no prolonged QRS duration or have severe symptoms [2]. Therefore, alternative therapy for patients with persistent symptoms is needed.

Cardiac Contractility Modulation (CCM) is an electrical device-based approach in which relatively high voltage electrical signals are applied during refractory period of the heart. These signals do not elicit a new contraction but rather increase the force of contraction without increasing the myocardial oxygen consumption [3]. CCM appears to reverse the molecular remolding associated with heart failure and normalize the expression of several calcium handling proteins and stretch response genes, such as phospholamban, sarcoendoplasmic reticulum Ca2+-ATPase (SERCA2a), Ryanodine Receptors (RYR), Calcium Binding Proteins (CBPs), Na-Ca exchanger-1 (NCX-1) [4-6]. Prospective randomized multicenter studies have demonstrated that CCM improved the symptoms, quality of life, and exercise capacity [7-9].

CHF leads to ventricular electrical remolding and the susceptibility to cardiac arrhythmia. Both CRT and VAD have been shown to alter the electrical characteristics of failing heart and reduce the incidence of ventricular arrhythmia [10]. From the hemodynamic perspective, CCM has significant beneficial effects similar to CRT and VAD. Recent clinical trial suggests that CCM improve cardiac function, prevent chronic ventricular depolarization delay in heart failure and reduce the mortality rates [11,12]. However, to our knowledge, the effect of CCM on cardiac electrophysiological characteristics during CHF heart has not been described. Therefore, in this study we investigated the effect of CCM on cardiac function and electrophysiological characteristics in a rabbit model of CHF.

All animal experiments were approved by The Institutional Animal Care and Use Committee of Hebei Medical University. Thirty healthy New Zealand white rabbits of both genders (6 months old and 2.5-3.5 kg weight) were provided by the Experimental Animal Center of the Hebei Medical University. The quality of the animals was first class standard (License No: SCXK-2008-1-003). Those animals were randomly divided into three groups (n=10): sham operation, heart failure, and CCM stimulation+heart failure (CCM group). In the sham operation group, rabbits underwent a thoracotomy only; in the heart failure group, rabbits underwent thoracotomy and ascending aortic cerclage without CCM; in the CCM group, rabbits underwent thoracotomy, ascending aortic cerclage and receive 4 weeks CCM after the formation of chronic heart failure.

Rabbits were anesthetized with 3% sodium pentobarbital at 1 ml/kg body weight. The chest was open between intercostals 2 and 4 at the left sternal border area and the heart was exposed. The ascending aorta was dissected for about 4-5 mm at 1.0 cm distal to aortic root. The ascending aortic diameters were measured by M-mode echocardiography before surgery. Aortic circumference was calculated and occluded to make cerclage constriction to 60% of the original circumference. The electrode was sutured to left ventricular anterior wall and bare wires were ensured to have good contact with myocardial tissue. The other ends of the electrode were punctured subcutaneously to the neck for later use. 12 weeks later, the symptoms of heart failure such as loss of appetite, reduction of activities, breathing acceleration occurred in the rabbits. Left ventricular ejection fraction ≤ 40% indicated that the heart failure model was successfully established.

The free ends of the electrode on the neck were connected to an R-wave triggering stimulation instrument (BARD Micro Pace EPS320 Cardiac Stimulator, USA) to deliver CCM stimuli. CCM signals were applied to the epicardial surface of the left ventricular anterior wall through the electrode as a biphasic square-wave pulses (phase duration=2 ms, stimulus amplitude=7 V, 30 ms delay after R-wave sensing). CCM stimuli were delivered to the absolute refractory period of cardiac excitations under sinus rhythm 6 h per day for consecutive 4 weeks.

Programmed electrical stimulation protocols were used to assess the electrophysiological characteristics. The Diastolic Threshold (DT) was measured using S1-S1 stimuli. The pacing rhythm was 10 times faster than its own heart rate. DT was defined as the minimum voltage required for capturing the heart. The Effective Refractory Period (ERP) was estimated using an extra-stimulus protocol consisting of an 8-beat drive train (S1) followed by an extra-stimulus (S2) at progressively shorter CLs (2 ms steps). ERP was defined as the longest S1- S2 interval that failed to capture ventricular. Pacing stimuli were applied at twice the diastolic threshold intensity and 2 ms in duration. The interval between two drives was 1 min.

To eliminate variations of vulnerability to fibrillation associated with the slowing or acceleration of heart rate, Vortex Formation Time (VFT) measurements were performed using S1-S1 stimuli at the same heart rate. Electric stimulation was supplied at a stable paced cycle length of 100 ms. The interval between each episode of stimulation was 1 min. The initial pacing voltage was 2 V, and progressively increased by a step of 1 V. The VFT was defined as the smallest amount of voltage required to elicit ventricular fibrillation [14].

All statistical analyses were performed using SPSS 16.0 software. The data were presented as mean ± standard deviation (x ± s). Differences among multiple groups were compared with single factor analysis of variance while the comparison between two groups was detected with LSD method. A p value<0.05 was considered statistically significant.

The establishment of heart failure model

Table 1. Comparison of echocardiography indicators in three groups before modulation.

Table 3. Comparison of electrophysiological characteristics in three groups before and after 4 weeks of modulation.

Table 4. Comparison of serum BNP level (ng/ml) in three groups before and after 4 weeks of modulation.

SERCA2a is a key regulator of cardiac contractile force. By PCR we examined SERCA2a mRNA expression levels in each group. The results showed that SERCA2a mRNA level was significantly decreased in HF group compared to sham group (P<0.05), but was significantly increased in CCM group compared to HF group (P<0.05) (Figure 1A). Similar changes of SERCA2a protein expression levels were observed in the three groups (Figure 1B). 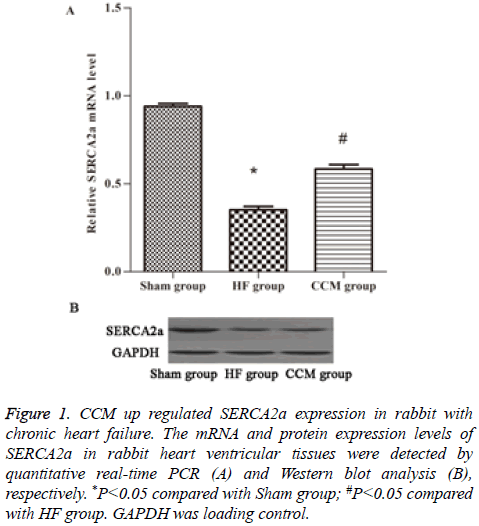 Chronic heart failure is a significant health burden. Approximately half of the deaths are secondary to arrhythmic cause, mainly because of lethal ventricular arrhythmias such as ventricular tachycardia and ventricular fibrillation. With the progression of CHF, the heart adapts through a complex process of remolding, resulting in adverse effect on cardiac function and electrophysiological characteristics [15]. An appropriate CHF animal model would be useful to develop novel preventative and reparative therapies. In the study, we presented a novel rabbit model of chronic heart failure and investigated the effects of CCM on cardiac function and electrophysiological characteristics using this model. The reasons for the choice of rabbit as the model in this study are as follows: (1) Rabbit closely mimics the alterations of myocardial function in the end-stage failing human myocardium. (2) The cardiac electrophysiological characteristics of rabbit are similar to those of human. (3) The heart size of rabbit is large enough to implant electrode [16,17].

The heart failure model induced by aortic constriction led to increased left ventricular afterload. After 12 weeks of aortic constriction, the heart failure model was confirmed based on echocardiography examination and serum BNP levels. The animals in the HF group with both systolic and diastolic dysfunctions and structure remolding exhibited similar pathological changes to human, such as the increases in LVEDD, LVESD and BNP, and the decreases in LVEF, LVFS and E/A. Compared with shame group, electrophysiological remolding was observed in HF group, QTc and ERP were extended, DT and VFT were decreased. Those changes can increase the risk for life-threatening arrhythmias.

CCM indicates the application of non-excitatory electrical signals to the myocardium to elicit a positive inotropic effect during the absolute refractory period of the action potential [18]. CCM could benefit symptomatic patients with HF who are not candidates for CRT. Preclinical studies have demonstrated that electromagnetic field produced by CCM can induce the changes in gene expression, which will help restore the ability of failing myocytes to handle calcium cycling and contraction. Chronic CCM signal application can reverse ventricular remodeling both globally and at the cellular and molecular levels [19]. Recent study further showed that CCM can reduce mortality rates in heart failure population estimated from the MAGGIC score [11]. In present study we showed that CCM improved LVEF, LVFS, E/A ratio and decreased LVESD , LVEDD and BNP levels, indicating that CCM therapy enhances systolic and diastolic function and reverses the remolding of left ventricle. Furthermore, we demonstrated that the underlying mechanism of CCM therapy may be related to the up regulation of SERCA2a expression at mRNA and protein levels. SERCA2a is a critical ATPase responsible for Ca2+ reuptake during excitation-contraction coupling, and impaired Ca2+ uptake consequent to decreased expression and activity of SERCA2a is a hallmark of heart failure characterized by severe contractile dysfunction. Normalization of SERCA2a expression has been shown to restore cardiac function and ameliorate associated symptoms [3].

Cardiac remodeling includes structural remodeling and electrophysiological remolding. During electrophysiological remolding, the changes of a variety of ion channels, sarcoplasm reticulum calcium cycle and the gap junctions between cells lead to reduced cardiac electrical stability, slowing of conduction, prolonged duration of the action potential and make the heart prone to arrhythmia [20]. In the present study we found that CCM restored the prolonged QTc and ERP, increased VFT, and reduced the susceptibility of arrhythmia. The effects of CCM on electrophysiological remolding can be interpreted as follows based on previous studies. First, improved cardiac mechanics could reduce the incidence of arrhythmias and reverse electrophysiological remolding. It have been documented that both CRT and Left Ventricular Assist Devices (LVAD) achieve significant beneficial effect on mechanical remolding [10,17]. QTc interval was significantly decreased with LVAD [21]. Second, a reduction in SERCA2a can predispose to Ca2+ and electrical alternans in CHF, which will change electrophysiological characteristics and increase arrhythmia susceptibility [22]. Preclinical study showed that enhanced SERCA2a levels in CHF model reduced the propensity for both Ca2+ and APD alternans. As a result, increased expression of SEECA2a in HF model reduces arrhythmia [23]. Increased expression of SERCA2a in cardiomyocytes produced larger SR Ca2+ release, leading to a reduction in prolonged ADP [24]. In our study we found that extended QT interval and ERP in CHF rabbits were rescued with the up regulation of SERCA2a expression. Third, CCM may restore the function of ion channel in CHF cardiomyocytes. CCM could shorten the ADP duration in isolated rabbit heart partially dependent on the activation of Iks [25]. Electrical stimulation (CRT) also manifests a partially restoration of the reduction Ik1 and Ik in dogs with HF [26]. Therefore, we speculate that CCM could restore electrophysiological characteristics in CHF and improve the remolding of ion channel by some unknown mechanism.

The present study has some limitations. First, in our model CCM was applied to epicedial, which was different from the endocardial typically used in clinical practice. It is unclear whether this difference affects the extrapolation of our results to human. Second, patch clamp analysis is needed to explore the effects of CCM on the function of ion channels.

In conclusion, ascending aortic constriction is an effective method to establish a rabbit model of chronic heart failure. CCM can improve cardiac function; reverse structural remodeling and electrophysiological changes in heart failure rabbit model, perhaps by up regulating the expression of SEECA2a. These findings provide insights into the mechanism of CCM therapy and support the application of CCM in the clinical treatment of CHF.

This work was supported by Natural Science Foundation of Hebei Province, China (No. H2015307037).