Cantharidin Poisoning in a Child with Hematemesis: A Case Report.

Cantharidin is toxic compound present in "Spanish Fly" commonly known as blister beetles. Which is vesicant and toxic in nature.Clinical features of cantharidin poisoning include burning sensation of mouth, nausea, hematemesis, gross hematuria, and dysuria. Mucosal erosion and hemorrhage is found in upper GI tract. We reported here a case of accidental ingestion of blister beetle in eighteen months old girl resident of Aseer region. She brought by her fatherwith classical sign and symptoms ofcanthardinpoisoning included hematemesis, abdominal pain, hematuria and suspected poisoning was confirmed by her father who brought similar insect which was ingested by patient. Patient was managed conservatively, recovered and discharged after 7 days.

Cantharidin is a toxic substance secreted by beetles (Spanish Fly) of the Meloidae family (Coleoptera order), these insects collectively called blister beetles and is a well known toxin and vesicant [1]. Cantharidin compound is an odorless, colorless in nature that is insoluble in water. It is highly irritating and causes acantholysis and vesicle formation when in contact with skin or mucous membranes. After ingestion, it is instantly absorbed from the GI tract and rapidly excreted by the kidneys [2]. Cantharidin, a bicyclic terpenoid, has an inhibitory effect on protein phosphatase 1 (PP1) and protein phosphatase 2A (PP2A). It is collected in the haemolymph, genitalia and other tissues [3,4]. Spanish flies and other meloids have also been used medicinally as cutaneous irritants, vesicants, abortifacients and aphrodisiac [5].

Eighteen months old Saudi girl previously healthy, presented with vomiting of fresh blood more than 8 times for one day. The child was in his usual condition of health tell one day prior to admission when he presented to Alberk general hospital where they live, with history of vomiting fresh blood bright red in color and sometimes with clots almost 8-10 times moderate amount for one day. She kept in ER for few hours in this hospital for stabilization, and then shifted to our tertiary care center for paediatrics in Abha. This compliant was associated with lethargy, poor feeding and activities for the last day, but no history of fever, abdominal distension, jaundice or diarrhoea, convulsion skin rash, drug ingestion or trauma. Other systemic reviews were unremarkable. The child was completely healthy before with unremarkable past and neonatal history. He is on usual regular diet and formula with no recent dietary changes. Their parents are consangous healthy with other three healthy siblings and no history of similar condition. They are living in Alberk in their own house with good socioeconomic status.

Abdomen: Soft lax no distension, tenderness or organomegaly, and no ascites. Other systemic exam was unremarkable.

Actually when we retrieved detailed history, the father remembered that night before presentation he found a common beetle usually available in their area in his mouth and he removed it. Because it’s common and can be found even in their home, the father thought this is trivial information and will not help. So, we search about it and we found this beetle ingestion in children is well known cause of cantharidin poisoning. We asked the father to bring one of this beetles available in their area and it was the same causative agent as mentioned in literature as shown in Figure 1. 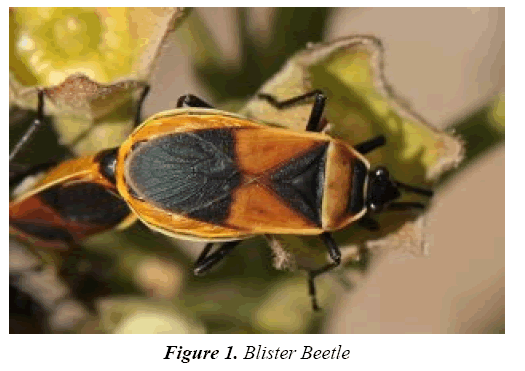 This case emphasizes on a clinical presentation of cantharidin toxicity followed by ingestion of a blister beetle. In one beetlethe amount ofcantharidin content ranges from 0.2 mg to 0.7 mg depending on the type of species [5]. The range of lethal dose in adults estimated from 10 to 80 mg, but most commonly is reported less than 60 mg [6].

Study show that the gross haematuria with granular casts is also a significant feature which manifest on the first or second day [7]. Cantharidin is having high-binding affinity for albumin; haemodialysis would be expected to minimize the effect [8].

The toxic effects of canthradin have been reported with multiorgan failure and its effects directly attributed with chemical irritation. The action occurs at cellular level elicits inhibitory effects of both protein phosphatases types 2A and 1 [5]. Due to high affinity property of canthradin with albumin It undergoes excretion by glomerular filtration, causing glomerular damage and acute tubular necrosis, as well as blister formation in the lower urinary tractand even It van lead to death due to renal failure. Renal microscopy shows that oedema of Bowman's capsule and basement membranes, causing constriction of glomerular capillaries. Sloughed epithelial cells pack into Bowman's space. Tubular microscopy of the kidney shows, epithelial disintegration and oedema of the basement membrane with resulting lumen occlusion are observed. Areas of complete tubular degeneration have been observed [8].

Till now, there is no antidote ofcanthradin known. Supportive management has been initiated with IV fluid at maintenance dose. Serum electrolytes and blood gas abnormalities to be monitored closely. IV use of H2 blockers and proton pump inhibitors may.

There is no specific antidote for cantharidin. The management is supportive, including IV fluid at maintenance rate and correction of electrolyte and blood gas abnormalities. The use of IV proton pump inhibitors or H2 blockers may enhance the healing of the ulcerations that result from the local effect of the toxin on the gastric mucosa [5]. Given cantharidin's high-binding affinity for albumin, haemodialysis would be expected to have minimal, if any effect [8]. The ultimate prognosis is good with regard to renal function in initial phase [9].

Cantharidin poisoning does not reveal with particular clinical feature, but a detailed and in depthhistory record combined with the presenting clinical symptoms should alert for this rare event. Nowadays, cantharidin is also used as aphrodiasiac compound and available in pharmacy. Therefore, health education for both the general population and the medical community about canthardin poisoning may have some value in prevention of events.