Can the biofilm produced by Staphylococcus aureus on implant be eradicated by covered with bone cement? in vitro study

Introduction: Periprosthetic joint infections (PJI) are increasing as a result of increased major joint arthroplasty (MJA). Classical treatment of PJI is a two-stage revision. However, this approach results in morbidity and is not cost effective. We investigated whether covering of the implants with bone cement is sufficient for eradication of microorganism on biofilm.

Materials and Methods: 24 plates were infected by Methicillin-resistant S. aureus (MRSA) in tryptic soy broth (TSB) for biofilm formation for 48 h. They are divided into four groups. Biofilm and living bacteria were shown in first and second groups. Infected implants were covered with bone cement to show eradication of biofilm in third and fourth groups. After implants were covered with bone cement, the bone cement was broken 24 h later, in sterile conditions. Implants were evaluated in terms of bacteria colonies by using the dilutions method.

Conclusion: This study shows that, Staphylococci biofilm formation on orthopaedic implants can be eradicated completely by covering the implants with bone cement. PJI may be treated by covered with bone cement without removed implants.

PJI is a challenging case among the orthopaedic surgeons although it is seen rarely. Variations of both surgical approach and implants for PJI increase every day. Implant surfaces are rich in serum proteins, which ease bacteria adhesion and accumulation [1]. Bacteria adhered on implants form complex glycocalyx biofilm. Biofilm forms a shield against systemic antibiotics so the treatment of PJI generally fails [2]. For the treatment of PJI treatment, all implants should be removed and long-term antibiotic treatment is required after soft tissue debridement [3]. Temporary antibiotic-loaded spacers should be also filled in. However, removing the implants, which are well fixed in the bone, may cause severe bone mass loss [4]. In addition, if the microorganism is unidentified, systemic antibiotics and spacers can be insufficient for PJI [5,6]. Treatments, which do not require removing the well-fixed implants and which are not specific to microorganism, are required. In our in vitro study, after biofilm formation on the implant surface, we covered the entire surface of it with bone cement and evaluated the effect of bone cement on biofilm producing Staphylococcus aureus.

24 standard Titanium (Ti) plates with 4 holes and 3.5 mm thickness (Acumed) were divided into four groups. For this study, strong biofilm producer reference strains were selected from the American Type Culture Collection. It is methicillin-resistant S. aureus (MRSA) ATCC 43300. Biofilm producing capacity of these strains was confirmed by the reproduction of the black colonies on Congo red agar [7]. Each isolate was suspended in 25 ml of tryptic soy broth (TSB) supplemented with 0.5% glucose to achieve a turbidity equivalent to a 0.5 McFarland-standard (~108 CFU/ml). Sterile implants were inoculated in this solution for 48 h [7]. After the inoculation, they were put into sterile saline solution to wash and remove the planktonic cells for one minute (Figure 1A). Then, they were separated into four groups (each contains six) as;

Figure 1: Implant was washed with sterile saline solution (A), then bone cement shell was broken (B, C) for the evaluation of implant.

Group II: Positive dry processing survival control group. Six implants not covered with bone cement were put into six new sterile topped containers without any medium or water and incubated for 24 h at 36.5ºC. Then same processes were performed for the counted colonies.

Group III: Bone cement-only group. Six implants were covered with bone cement (40 g, Implant cast Germany) (Figure 1B) and were put into the six new sterile topped containers without medium or water, then incubated for 24 h at 36.5ºC. Bone cement was broken under sterile condition at the end of the incubation period (Figure 1C). Implants were put into six new sterile topped containers. Then same processes were performed for the counted colonies.

Implants were put into sterile, lidded vessels containing 25 mL of a sterile saline solution, and were then vortexes for 3 minutes. The biofilm layer of the bacterial colonies was thus removed from the surface of each sample and converted into a bacterial suspension. To quantify the colonies, serial dilutions (1/10, 1/100, 1/500) were prepared for each sample using the bacterial suspension and additional volumes of steril saline [8]. From these solutions, samples were cultured onto agar-based medium plates containing 5% sheep’s blood, and were then incubated for 48 h. at 36.5ºC and approximately 70% humidity. Bacterial colonies were then counted (Figure 2). In case of no reproduction, an additional incubation of 24 h was done not to miss slow growing colonies. 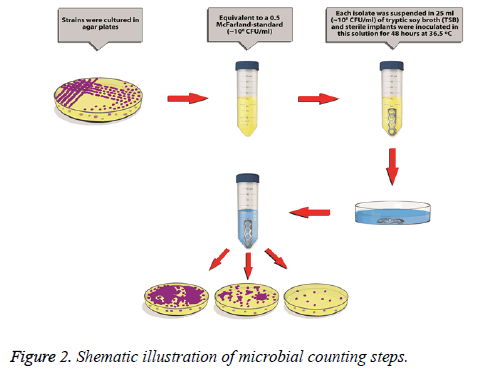 Data are presented as the mean ± standard deviation (SD). A normality test (Kolmogorov-Smirnov) was performed, followed by one-way ANOVA and a Kruskal-Wallis H-test. P<0.05 was considered to be statistically significant, and all of the statistical analyses were performed using the SPSS statistical software package, version 21 (SPSS Inc., 2012. Chicago, USA).

Bacterial colonies count was listed in Table 1. Additional 24 h incubation in the treated groups was shown. No slow growing colony was detected in group III and IV. Significant differences were found between the groups II and III, II and IV whereas there were no statistical differences between the groups III and IV. Bacteria colonies in the groups, which weren’t covered with bone cement, were found very high (p<0.05). Bacteria colonies in the groups, which covered with bone cement, were eradicated totally (Table 1). Biofilm formation on implant surface was also confirmed by SEM (Figure 3). Huge number of bacteria can be observed lying over the surface of plates. 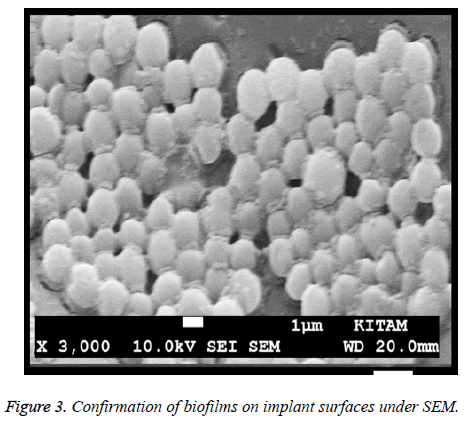 Figure 3: Confirmation of biofilms on implant surfaces under SEM.

The biofilm as a pellicle covering the surface of the implants is clearly seen and distinguishable.

As the aging population increases, MJA is performed more common due to both fracture and osteoarthritis. Following the MJA, PJI develops with a rate of 0.3-23.7% [3,9]. Host defence mechanisms against bacteria that reach the surgical area in the early period are stimulated and they try to restrain or destroy the bacteria. If they fail, bacteria reproduce faster and form biofilm by adhering to implant surface [9]. The mature biofilm formation protects the bacteria from the defence mechanisms of the body and systemic antibiotics [10]. Thus, in late or chronic PJI, the removal of all the implants and the two stage revision surgery are preferred [11].

Patients, who underwent MJA, generally have comorbid systemic health problems in older age [12]. It is easy to remove the implants and does not cause additional complications, when PJI entirely surround the implant area and cause septic loosening [13,14]. However, bone osteotomy is usually required, which results in additional bone defects if well-fixed implants are removed [15]. These processes increase the duration of surgery and the risk of infection. After the implants are removed completely, antibiotic loaded spacers are generally used. But as a handicap; when these spacers are well-fixed, it may be difficult to remove them, or when they are not well-fixed, they may cause joint stiffness and pain. In order to decrease these drawbacks of two stage revision surgeries, several institutes prefer one stage revision method [16]. However, one stage revision surgery has limited indications and it has higher re-infection risks when compared with two stage revision surgery [17].

A great number of studies are conducted to prevent biofilm formation for prevention of orthopaedic infections and to inhibit the biofilm formation [18]. In some of the studies, the aim is to cover orthopaedic implants with different substances during production and to prevent the formation of biofilm. In their experimental study, Qin et al. showed that silver coated titanium implants decrease the formation of infection [19]. After PJI, there isn’t any study, which shows whether PJI can be treated by covering the implant surface. This is the first experimental study manifesting that surrounding with bone cement on implant surface could eradicate the biofilm.

MRSA was preferred since it is responsible for the majority of PJIs to be resistant to treatment [20,21]. The S. aureus strains are able to produce high amount of biofilm [22]. While the biofilm that is formed with the first 6 h of incubation are accepted as early (immature) biofilm, biofilm after 24 h or longer are named as mature biofilm [23]. Because the PJIs have long durations, mature biofilms are required and 48 hmature biofilms are used in present study. Since the method does not show a dose dependent effect, we assumed that it would not be affected by bacteria intensity and we preferred high concentration bacteria. Our hypotheses are that;

1. Bone cement gives off high heat while it is hardening.

2. Its tight adhesion to the implant and its effect of isolating the implant from the surrounding tissues could prevent bacteria to generate living and reproducing forms.

In our study, the implants were infected in vitro, and then the bacteria and biofilm formations were shown on them by SEM in group I. We investigated the effects of bone cement on bacteria and biofilm formation by covered implants. We suspended each of the groups with bacteria and biofilm in sterile topped containers and observed the changes in their intensity in time. After 24 h, it was observed that biofilm intensity was still high (group II). While the sonication is preferred to indicate the biofilm on the implant in some publications, the vortex method is still used often [24]. In our study, 3 minutes of vortex was preferred to decrease the false negativity. A period of 24 h is enough because of the fast growth ability of the bacteria we used [25]. Nevertheless, in order to decrease the false negativity, the groups without reproduction were followed for an additional 24 h of period. We found that no bacteria biofilm were observed on the implant surface in third and fourth groups. Since hardening of bone cement increases the temperature even up to 90-100ºC, it helps adhering to the implant tightly [26]. We think that the high temperature and tight adhesion of bone cement may cause destruction of the biofilm structure. Since we used MRSA as bacterial strain, implants were covered by teicoplanin loaded bone cement in group IV. The fact that there weren’t any identified bacterial colony in both groups brings to mind that it is because of the heat necrosis of the bone cement and the high pressure during its tight adhesion rather than the antibiotic effect. Although there were no difference between the groups III and IV, antibiotic loaded bone cement in practical applications can be used for its effect against bacteria in bone and soft tissues.

We assumed that the implants were well fixed if the implant surface is not totally infected. Thus, in PJI, the available parts of implants could be covered with bone cement, as similar to this method, without removing the implant entirely. For this, the modular and instable components (insert, screw, head, and loose components e.g.) should be removed, then radical soft tissue debridement should be performed. Briefly; the integrity of well-fixed components are maintained, and cost effective approaches can provide short surgery time with low morbidity.

The limitations of our study are the lack of dilution test of Teicoplanin and requirements of in vivo studies.

Biofilm formations on implant were completely eradicated by being covered with bone cement. PJI may treat by covering the bone cement without removing well fixed implants.

Statement of human and animal rights: The study protocol was approved by the Institutional Human Ethics Committee of the University.