Veeramuthu A1* and Meenakshi S2

Multimedia files are increased in size and include affordable memory storage along with the popularity of World Wide Web (www) so that the requirement for effective tools for retrieving images from huge database is critical. For diagnosis, reference, therapy, surgery and training medical images are significant one. A meta-heuristic protocol is built for solving a vast variety of hard optimization issues with no need of deep adaptation to every issue. In this work, an automated Computed Tomography (CT) classification system with novel features selection technique on the basis of FireFly (FF) optimization protocol is suggested for medical images. Wavelets extract the features from medical images and selected CT image features are classified through usage of Naïve Bayes as well as k Nearest Neighbour. The suggested FF protocol attains improved accuracy in comparison to mutual information (MI) as well as the generic FF. Outcomes of simulations reveal that the suggested CFS-FF technique with NB enhanced classification accuracy by 2.83% than MI with NB and with kNN enhanced classification accuracy 2.86% than MI with kNN.

Digital medical images ensure visual information for diagnosis and progress in medical treatment. They X-Rays, MRI, CTconsume much space in medical databases and their retrieval from archives is a challenge. Historically, image retrieval models were text-based with addition from database management as images had to undergo annotation as well as indexing. Increase of image size and image database results in user-based annotation, which are cumbersome, subjective, and incomplete as text does not convey an image rich structure. To offset this, Content Based Image Retrieval (CBIR) research started in early 1990s with retrieval being based on automatic query image feature matching with database image through image-image similarity evaluation [1]. So, images based on visual content like color, texture, shape or other feature or combination of visual features set, are indexed. In an ideal situation, the attributes ought to be incorporated for providing improved discrimination in the comparison. Colour is the most typical visual attribute utilized in CBIR, essentially due to the ease of extraction of colour data from images. For extracting data about shapes as well as textural features are more complicated as well as expensive jobs, typically carried out after the first filter given by the colour attributes [2]. Advances in research are aided by the computer vision community. Multimedia databases are popular for applications like digital libraries, medical images, and news photos. CBIR systems ensure effective and efficient retrieval to access multimedia databases for users querying relevant images through perceptual (or low-level) attributes such as texture, colour, shape or spatial object layouts [3].

A novel FF algorithm based method for enhancing the retrieval efficacy of query expansions and concurrently ensuring lower computation complexity was presented by Khennak & Drias [10]. An FF algorithm discovers the optimal expanded query amongst a set of expanded queries (candidate set) and it permits the definition of length of expanded queries in an empirical manner. Outcomes of the simulation on MEDLINE, an online medical database, prove that the suggested method was more efficient in comparison to current best methods. The author increased the performance by optimizing image feature by adopting the FF algorithm [11]. Further, to improve the retrieval accuracy, random walk concepts based on Gaussian distribution was used to move all the fireflies to global best at the end of each iteration. Experimental results show that the proposed method achieved more accuracy and better performance than particle swarm optimization and genetic algorithm, and the use of Gaussian distribution further improved the retrieval accuracy. An automated CT medical image classification method is suggested wherein attributes are extricated via bi-orthogonal spline wavelets. A novel FF algorithm based features selection method is utilized. The chosen features are classified through NB as well as kNN.

The patient’s condition through digital medical image recordings and clinical care are part of the database for diagnostic, research and educational purposes. With huge amount of digital medical images generated, medical databases are huge and multi-varied. Retrieving required medical image from databases is a challenge. Most of the time, focus is within images relevant to clinical or research query. CBIR retrieving images from databases similar to query images, are now used for medical image retrieval. The major disadvantage is that every retrieval system handles a specific medical image type like mammography, brain tumour or specific disease. This study addresses retrieval of medical images from a multivaried database. The study uses Biorthogonal spline wavelets for feature extraction with feature reduction. Features are selected using a new FF based feature selector. Naïve Bayes as well as kNN classify CT images after features selection. Figure 1 shows the flowchart for proposed methodology. 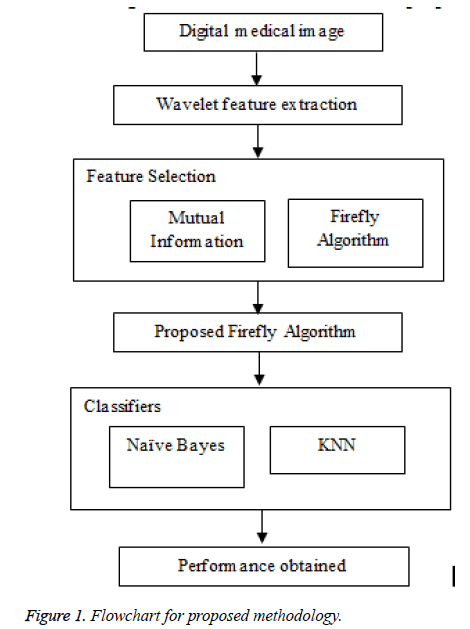 Wavelet: Wavelet transforms provide an adequate basis for images handling due to its advantageous characteristics such as its capacity to compact almost all of the signal energy into a minute number of transformation coefficients, which is called energy compaction. The capacity to obtain as well as denote efficiently lesser frequency parts like image background and higher frequency transients like image edges [12].

For image matrix [g(n,m)]N,M, the high-pass filters as well as complementary low-pass filters is employed on image columns as well as to rows followed by downsampling after every processing unit at first. Resultant coefficients may be utilized as attributes.

H( ) is a random variable entropy measuring associated uncertainty. H(X) For a continuous arbitrary parameter X is given by equation (2):

If X represents a discrete arbitrary parameter H(X) may be given by equation (3):

FireFly (FF) feature selection: Xin-She Yang developed FF algorithm at Cambridge University, on the basis of flashing patterns as well as fireflies behaviour. There are nearly 2000 FF species, and almost all emit short as well as rhythmic flashes. The patterns of the flashes are singular almost always for particular species. Flashes rhythms, rate of flashing and time when flashes are seen together form a pattern which attract males to females. Females respond to individual pattern of males of same species. FF algorithm is based on the FF’s swarm intelligence behavior. It is a metaheuristic protocol that owes its inspiration to the FF’s social behavior. FF algorithm finds global optimal solution. The FF algorithm focuses on task completion within a minimum make span and flow time to use grid resource efficiently. FF algorithm uses three rules [14]:

1. Fireflies are attracted to another disregarding the sex of the other, because they are unisex.

2. Attractiveness is always in proportion to brightness, and both reduce when the distance rises. For two flashing fireflies, the one less bright moves to brighter FF. If one is not more bright than the other, it moves arbitrarily.

FF optimization is described as

• FF attracts and is attracted by other Fireflies

• Brighter one attracts the less bright

Proposed firefly (FF) feature selection: The feature selection algorithm [15] incorporates FF algorithms behavior to improve features selection. The protocol begins with n fireflies xi, i=1,2, ….,n relating to all features in features set C. Intensity Ii of every FF xi is initialized. A FF i moves to its best mating partner j possessing minimal distance with i. If a FF is unable to find best mating partner, the FF i intensity is absorbed by system and is invisible to other fireflies in space. All subsets are tested for a terminating condition. The same procedure is followed by the algorithm for new FF groups, generated in earlier iterations determining intensity Iij of every group xij till a stopping criterion is satisfied.

Three rules are combined with the features of levy flight and are formulated a novel L´evy-flight FF algorithm (LFF). The real format of attractiveness function β(r) may be a monotonically decreasing function like the one given by equation (5):

For a particular γ, the characteristic length is Γ=γ-1/m → 1 as m → ∞. With the terms of the relation reversed, for a particular length scale Γ in an optimization issue, variable γ may be utilized as a general initial value. Which is

Distance between two fireflies i - j at xi and xj, correspondingly, refers to the Cartesian distance by equation (6):

Wherein xi,k refers to kth component of spatial coordinate xi of ith firefly. For other applications like scheduling, distance may be time delay or other adequate form.

The primary notion of classifiers is its usage for segmenting training data and later choosing optimal classifiers for classifying every segment.

Naïve Bayes refers to a probability model based supervised learning classifier. It is a flexible way to handle many attributes and classes, and based on probability theory. Bayes rule for supervised learning is given for unknown target functions by f: X→Y, or P(Y|X) If Y is assumed as a boolean-valued arbitrary parameter, then X is a vector comprising ‘n’ boolean features. Otherwise put as in equation (7):

wherein ym represents mth potential value for Y, xk represents kth potential vector value for X, and summation in denominator is over legal values of arbitrary parameter Y. An approach for learning P(YjX) uses training data for estimating P(X|Y) as well as P(Y). These are later utilized with Bayes rule for determining P(Y|X=Xk) for fresh sample xk. Naïve Bayes is an asymptotically fast learning algorithm examining all training input. It performed surprisingly well in various problems despite the model’s simplistic nature. Further, limited bad data amounts or “noise,” do not affect results much.

Simulations were performed with 150 brain, chest and colon CT scan images. The efficacy of the suggested features selection is compared with CFS and MI. Figure 2 to 6 give the classification accuracy, precision, recall, f measure, as well as specificity correspondingly. 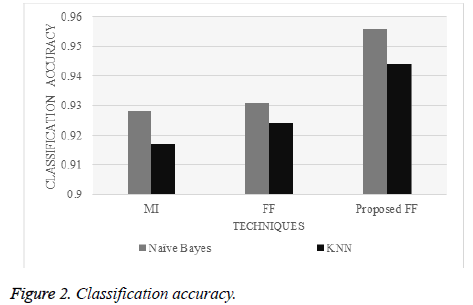 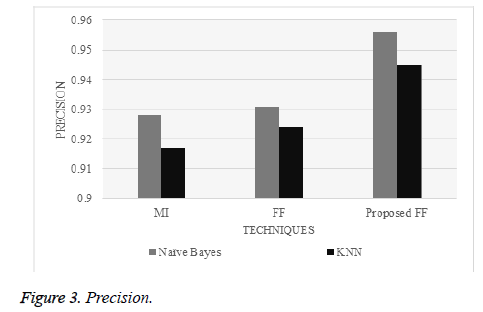 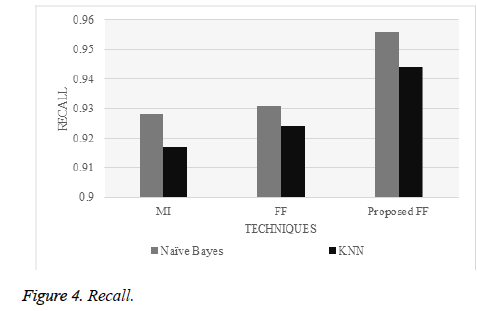 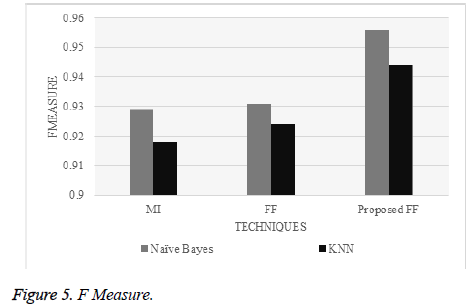 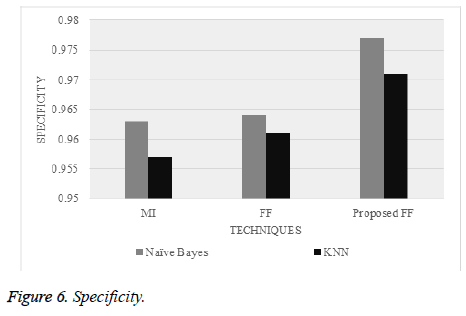 In the domain of CBIR systems, technology driven techniques perform better than others. A lot of research is being taken up in the domain of CBIR systems according to the users’ needs. Modelling complicated human behaviour is a troublesome task; but, the current state of knowledge on the domain is very little. The advantages of CBIR is an active domain of research for 2 major research public, data base organization, as well as computer vision. Features extraction techniques are simple, efficient as well as cheap. Time needs are lesser for finding every associated image. Several associated results happen solely through one search. CBIR disadvantages include semantic gaps, i.e., the lack of coincidences between data through which visual info as well as comprehension of data in a particular situation can be excerpted. Visual contents of pictures, i.e. visual subjects, are colours, size, texture, metadata and so on of images. It is hard to comprehend the information need of users through the query images as there are several objects to search from [16].

The benefits of FF include: FF automatedly splits the population into sub-groups, as local attractions are more strong than farther ones [17]. FF does not utilize historical individual best or global bests. This decreases the possible disadvantages of premature convergences. Furthermore, velocity is not utilized; therefore, issues related to velocity in PSOA is automatedly dropped. FF has the capacity of mobility to control variables like . Therefore, it is seen that FF is more effective in its control of variables, local search capacity, resilience, as well as removal of premature convergences. FF however, has some drawbacks like forced local optima, inability to get rid of local searches, its variables are set and unable to change over time. Moreover, FF algorithm does not remember the past situations of all fireflies and makes them move randomly despite previous better positions [18].