Image Fusion is the process of integrating two or more images from a single modality or multiple modalities. A tumour can be formed either by uncontrolled growth of cells in a particular human organ or due to lesions caused by protracted radiation exposure. The objective of this paper is to implement an innovative image fusion system for the detection of brain tumours. Fusing images obtained from MRI and PET can accurately access the tumour response. In this work, the proposed image fusion technique consists of two major processes such as (I) image enhancement and (II) image fusion both depend on Discrete Wavelet Transform (DWT). Lagrange’s interpolation is used for image enhancement. MRI and PET images are fused based on image enhancement and fusion technique that has been implemented and simulated in MATLAB. The fused image has complement information from both MRI and PET images and the visual quality has improved. The fusion parameters Average Gradient, Discrepancy, PSNR, MSE and Entropy are calculated and the results show the effectiveness of fusion based on DWT. This work can be extended to diagnose any type of abnormalities in all human organs.

In modern medicines and health care, computer assisted diagnoses and therapy strongly depend on image processing methods. Medical images are displayed on the screen to the medical professionals for diagnosing diseases. Imaging in Medical field helps the doctors to see the interior portions of the body for easy diagnosis and make keyhole surgeries for reaching the interior parts without really opening too much of the body.

The human body contains many curvilinear structures, the visualization is crucial for planning and navigating the interventional therapies and biopsies. Nowadays, most of the physicians face the problem of diagnosing and directing the patients with a single image solution. This scenario arises when they have to diagnose the disease with more than one modality. This constraint can be bridled by integrating the images from two complementary modalities. Fusion, compression and physical quantity derivation are computational methods required in several computer assisted therapies.

For accurate diagnoses, radiologists must integrate information from multiple images of a patient. Multiple images are registered in different formats and are overlaid or combined to provide additional information. The image fusion techniques, find application in medical imaging. The fused image should have complete information and the advantages of medical images should be highly reliable [1-3]. Multiresolution analysis is possible in both time domain and frequency domain by Discrete Wavelet Transform (DWT). The multiresolution analysis finds application in image compression [4], watermarking [5], edge detection [6], image enhancement [7], and image fusion [8]. The discrete wavelet transform has become a very useful tool for fusion. Fusion techniques provide spatial registration of 2-D surface.

To improve pathology identification and clinical diagnosis, the physician requires the fusion of functional image data and anatomical image data acquired from an organ with imaging systems of different modalities to provide composite image [9].

Brain imaging is a subfield of medical image processing deals with the functions and metabolism taken from the brain. Brain imaging is the pathological procedure used to diagnose and examine the medical images in a more effective, accurate and efficient manner. Fusion of the overall brain can be initially accomplished by fusing the skull, ventricular volume as well as the subarachnoid volume between images of the patient’s brain and other brain images or a common image or atlas framework. Identifiable land marks, in the brain can be applied to the coarse fusion to further compensate and adjust for other distortions that may have occurred. The methods can be applied to preoperative and post-operative imaging to enable more accurate comparisons between images and account for anatomical deformations that may have occurred, due to the respective procedures or other patient conditions like trauma, lesions or other abnormalities. The fusion of atlases with brain images for patients that have undergone surgical procedures or experience deformations in cranial and intracranial structures.

A tumour is formed either by uncontrolled growth of cells in a particular human organ or due to lesions caused by prolonged radiation exposure. Early detection of disease and malignant tissue can lead to a better diagnosis. The development of noninvasive methods for detection and of tumours has great importance in modern medicine.

Magnetic resonance imaging (MRI) is a non-invasive method that uses powerful magnetic field radio frequency pulses and a computer to produce detailed picture of organs, soft tissues, bone and virtually all other internal body structures that can help physicians to diagnose and treat medical conditions. MRI does not use harmful ionizing radiation and so it is more popular among patients. In brain MRI, a tumour can appear darker or brighter than normal tissues, or even as the same intensity as normal tissue. Within one slice of a tumour different regions can have different appearance. In some cases, tumours look similar to the surrounding normal tissue because large intensity overlaps between the tumour and the background.

The PET measures the functional feature of the examination, typically the amount of metabolic activity. PET scanning is also used to evaluate the grade of tumour. The Positron Emission Tomography (PET) scan is a suitable tool for patient monitoring and early assessment of tumour in oncology. 2’- deoxy-2’-[18F]-fluoro-D-glucose (FDG) is the most widely used tracer in clinical purpose. Glucose consumption with the FDG of tumour cell may not be sufficient to access the therapy. The features of cancer metabolism like proliferation, hypoxia and apoptosis may improve the assessment of tumour. 3'-[18F]- fluoro-3'-deoxythymidine (FLT) is a proliferation tracer providing earlier and more specific information than FDG. 18- Fluoromisonidazole (FMISO) tracer can identify tumours resistant to therapy, especially radiotherapy [10].

The medical images acquired have imperfections due to low resolution, high level of noise, low contrast, geometric deformation and imaging artefacts. The imperfection in medical images is a major issue in medical field. It has serious impinge over patients that may cause faulty diagnosis or path planning during surgery. The purpose of enhancement is to analyse the brain images accurately to facilitate effective diagnosis the brain related diseases and problems. Image enhancement is the pre-processing tool for further image processing steps, quantitative actions can decide which methods are mainly suitable and optimal. The purpose of image enhancement is to improve the visual clarity of the image and provide better transform representation for future automated image processing like analysis, detection, segmentation and recognition. The comparison of different brain imaging techniques with respect to their applications, limitations and advantages are presented [11].

In this paper the PET brain image is combined with Magnetic Resonance Image (MRI), which is rich in spatial resolution in order to diagnosis brain tumours. The proposed image fusion technique consists of two major processes such as (I) image enhancement and (II) image fusion, both depend on wavelet transformation. The Positron Emission Tomography (PET) has a low spatial resolution; hence the PET image is enhanced before fusing the PET image with MRI image. After enhancing, the resulting image will have high spectral and spatial resolution than the conventional image fusion, which will help the physician in all aspects for diagnosing the tumour cells.

The Proposed image fusion method is shown in Figure 1. The input low resolution multispectral image (i.e. PET) is separated into the sub-bands such as HL, LH, LL and HH by discrete wavelet transform. 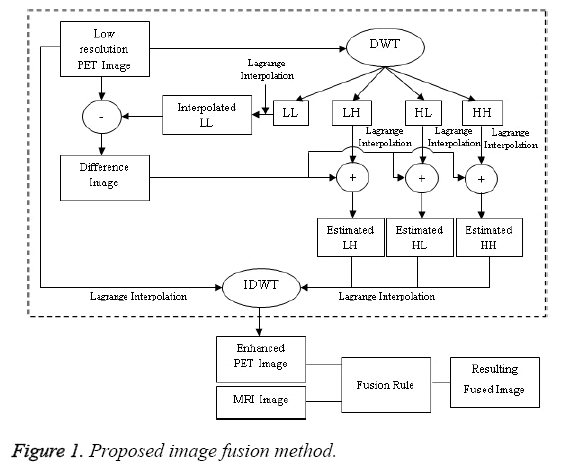 The first low-pass sub-band having the coarse approximation of the source image called LL sub-band, and three high pass sub-bands that develop image details transversely in different directions-HL for horizontal, LH for vertical and HH for diagonal information. The Lagranges interpolation is applied to all four bands.

The difference between the image from sub-band LL and the input PET image is computed and the Lagrange interpolation is performed in the LL sub-band image, thus the lower resolution image is enhanced. The computed difference image is then added to the images in sub-bands HL, LH, HH. The enhanced PET image (i.e. high resolution image) is achieved by taking the inverse DWT of input images, HL images, LH images and HH images as shown in Figure 1.

The algorithm of the proposed DWT based image enhancement fusion technique is given below,

8. Apply DWT on both enhanced PET image and MRI image 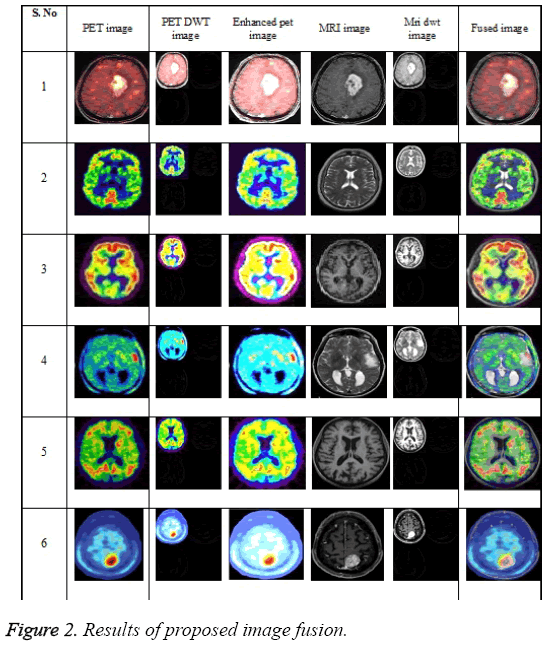 An improvement in the PSNR value will increase the visual appearance of the image Equation 3. The mean square error (MSE) is a measure of spectral fidelity between each unsharpened MS band and corresponding sharpened band Equation 4.

Entropy is the amount of information get from the fused image Equation 5. The fusion performance has been improved for higher values of entropy.

Where p(l) is the probability of gray level l and the dynamic range of the analysed image is [0, L-1] (typically L=256).

Table 1 gives the fusion parameters; the proposed method achieves high average gradient and very low discrepancy that implies high spatial resolution and high spectral resolution. Higher PSNR valves and low MSE values achieved by the proposed system reflects the quality of reconstructed image has improved. The performance of information got from the image is proved by entropy. The better quality of the image is improved visually and quantitatively which helps the physicians to detect the brain tumour and also assist during intervention.

This paper deals with Detection of Brain Tumour using Discrete Wavelet Transform based Medical Image Fusion for the diagnosis and better treatment. Image Fusion is the process of integrating two or more images from a single modality or multiple modalities. In this work, DWT based image enhancement and fusion technique has been implemented. The proposed image fusion technique consists of two major processes such as (I) image enhancement and (II) image fusion both depend on wavelet transform. Lagrange’s interpolation is used for image enhancement. MRI and PET images were fused by the proposed method. The fused image has complement information from both MRI and PET images and the visual quality has improved. The fusion parameter Average Gradient, Discrepancy, PSNR, MSE and Entropy were calculated and the results show the effectiveness of fusion based on DWT. The proposed method can be used to detect all kind of brain tumours. This work can be extended to diagnose any type of abnormalities in all human organs.