Pemphigus vulgaris (PV) is an autoimmune blistering disorder treated with immunosuppressive agents. The patients with pemphigus vulgaris have remission and relapses and there is a need to have easy accessible and cheap laboratory monitoring markers. The aim of this study was to investigate the relationship between the course of the disease and the changes of the levels of neutrophil/lymphocyte ratio (NLR), platelet/lypmhocyte ratio (PLR), mean corpuscular volume (MCV) and mean platelet volume (MPV) in the patients with PV. Pemphigus patients (n=43) and healthy controls (n=40) were included in the study, retrospectively. Clinical and laboratory data, including C-reactive protein, erythrocyte sedimentation rate, hemoglobin, hematocrit, red cell distribution width, lymphocyte count, neutrophil count, platelet count, MPV, of the patients and healthy controls were obtained from our institutional computerized medical database. NLR and MPV levels in patients are higher than health controls (p<0.05) MPV changes are consistent with disease course according to variance analysis. MPV cut-off level is 8.45 and the specificity and sensitivity of this cut-off level is 65% and 76% to predict the pemphigus attacks, respectively (p=0.427). NL ratio, PL ratio and MPV may be accepted as inflammatory markers. MPV levels may be recommended as a marker for the determination of relapses in the patients with pemphigus vulgaris.

Pemphigus vulgaris (PV) is an autoimmune disease characterized by blistering and erosions on skin and mucous membranes due to acantholysis. The patients with PV take immunsupressive drugs, i.e steroids, and are being followed. The aims of the follow up period for these patients are to provide disease control, to prevent complications and to avoid adverse events associated with the prolonged use of steroids and immunosuppressive drugs. The drugs can be stopped when a state of no new lesions are observed during follow up period. If necessary, treatment may be resumed. Treatment regimens determine follow up period and management of the patients with PV [1].

Although PV is an example of skin-specific autoimmune disorders, it is well known the role of cytokine activation and inflammation in the pathogenesis of PV [2]. IgG antibodies in the patients with PV are detected in the intercellular substance and in the serum of the patients by direct and indirect immunofluorescence tests. However, in some cases, there are no strong correlation between the titre of pemphigus antibodies and the disease activity [3]. Additionally, these tests are expensive in some countries and less accessible. Therefore,there is a need for easier and cheaper laboratory tests during the follow up period of the patients with PV.

The neutrophil to lymphocyte ratio (NLR) has been suggested as a simple index of systemic inflammatory response in ill patients [4,5]. Also, platelet to lymphocyte ratio (PLR) and mean platelet volume (MPV) are also accepted as novel indirect potential inflammatory markers [6-8]. These tests in routine hameatologic laboratory analysis which are cheaper, easier accessible could be possible to reflect drug requirements and a suspected activation in patients with an inflammatory disease.

The aim of this study was to investigate the relationship between the course of the disease and the changes of the levels of NLR, PLR and MPV in the patients with PV.

After approval from the local human ethics committee, we included the patients with pemphigus vulgaris in this retrospective study (between 2008-2016 years). Healthy adult subjects admitted to our institution for a routine check-up were included as a control group. Patients with known additional inflammatory disorders and/or comorbidities, patients with missing data were not included the study. The cases not having a disease severity score were excluded.

This study was designed as a retrospective cohort study. However, a healthy control group was used to determine the differences of the initial haematological parameters in the patients and healthy controls.

Data was assessed by using SPSS programme. (SPSS 20.0; SPSS Inc., Chicago, IL, USA). Results expressed as mean ± SD. Variables are conducted with either independent samples t test. A spearman correlation analysis was used to determine the correlations between haematological parameters and pemphigus disease severity. A variance analysis and Bonferoni test A were used to determine the changes and differences in the repeated measurements. Roc analysis was used to determine cut-off value with sensitivity and specificity for MPV levels. p value of <0.05 is considered as statistically significant.

Between January 2008 to July 2016, 43 outpatients with a diagnosis of pemphigus vulgaris attending the Dermatology Department (27 male and 16 female), based on clinical examination, histopathology, and direct immunofluorescence and 40 healthy controls (20 male and 20 female) were included in the study.

Table 1 shows the comparisons of laboratory variables of the patients and healthy controls. There is no significant relationship and correlation between other haematological parameters and pemphigus disease severity (Spearman correlation, p>0.05) in our patients group.

Table 1. Comparison of laboratory variables of pemphigus patients (before treatment) and healthy controls at baseline.

Table 2 and Figure 1 show that MPV changes are consistent with the disease course, but the changes of NL and PL rates are not consistent.

Figure 2 shows ROC-curve for MPV levels at the time of before treatment (measuring 1) and relapses (measuring 4). 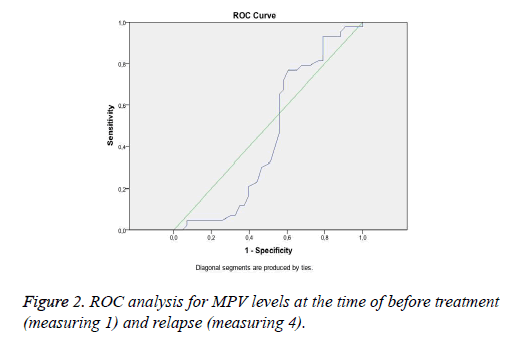 Figure 2: ROC analysis for MPV levels at the time of before treatment (measuring 1) and relapse (measuring 4).

Pemphigus vulgaris patients require systemic corticosteroids and/or immunosuppressive therapies. These agents may put the patients into remission. According to different treatment protocols, immunsupressive drugs may be stopped. However, relapses can be observed within an indefinite period of time. Anti-desmoglein antibodies (anti-Dsg1 and anti-Dsg3) are correlated with the course of the disease in patients with Pemphigus vulgaris [10]. However, in some cases, these correlations may be weak [3]. Additionally these test are not cheap and easy accessible in some countries. Therefore, there is a need for cheaper and easier accessible laboratory tests when following the patients with pemphigus vulgaris during the period of remission and relapse.

N/L ratio may be considered a systemic inflammatory marker. N/L ratio was studied in various dermatologic diseases including psoriasis, Behcet's disease and lichen planus [13-15]. It was reported that NL rates of the patients with pemphigus vulgaris were higher than the controls in a study, but were not related to disease severity [16]. In systemic inflammation, NL rates increase and the severity of the clinical status and clinical outcome may correlate well with the N/L ratio [4]. While NL rates in the patients group are higher than the controls, there is not a correlation between NL rates and disease severity in our study.

MPV is a parameter detected during routine blood count, and known to be a marker determined from megakaryocytes during platelet production, which is associated with platelet function and activation. There is an inverse relationship between platelet size and number in normal conditions. Platelet activation is a link in the pathophysiology of diseases prone to thrombosis and inflammation and MPV may be considered as a prognostic and therapeutic marker [8].

We know that MPV is decreased in some inflammatory bowel diseases such as ulcerative colitis and it could be used for determination of disease activity [17]. Likewise, high-grade inflammatory diseases, such as active rheumatoid arthritis or attacks of familial Mediterranean fever, present with low levels of MPV, and anti-inflammatory therapy may reverse the levels of MPV into normal range. Low-grade inflammatory conditions prone to arterial and venous thromboses, and high MPV associates with cardio- and cerebrovascular disorders [8]. Even though pemphigus vulgaris is an autoinflammatory disease, we can say that it has some characteristics with high grade inflammation according to our results.

Our study has some limitations. Present study was designed retrospectively. Because pemphigus vulgaris is a rare autoimmune disease, the study population is small. We could not performed any comparisons between MPV levels and anti- Dsg1 and anti-Dsg3 antibodies. However, to the best of our knowledge, this is the first report on the relationship between MPV and the course of pemphigus vulgaris. The results of the study need to be confirmed with further studies.