Blood carnitine as a biomarker for acute myocardial infarction.

Fatty acid oxidation is the major energy providing pathway of the myocardium and its inhibition impairs myocardial function. Earlier studies have demonstrated the malfunction of heart due to myocardial as well as systemic deficiencies of carnitine which plays an essential role in fatty acids metabolism. This study was aimed to compare the blood levels of carnitine between normal subjects and patients with acute myocardial infarction (AMI). A total of 50 AMI male patients (21 STEMI and 29 NSTEMI) and 144 normal controls were recruited. Blood carnitine was analyzed by liquid chromatography-tandem mass spectrometry. Total carnitine levels were significantly higher in STEMI (57.26 ± 4.51μmol/l) and NSTEMI (54.05 ± 3.52μmol/l) patients as compared to control subjects (35.84 ± 1.15 μmol/l). Similar trends were observed for free carnitine levels. The increased levels of carnitine in the blood stream of AMI patients might have resulted due to the poor uptake and/or increased leakage of carnitine through the ischemic myocardium. The clinical implications of these findings for the risk screening or diagnosis/prognosis of AMI require additional follow-up studies.

Carnitine is essentially required for the transport of longchain fatty acids into mitochondrial matrix for their oxidation to produce energy. About 95% of the total body carnitine is stored in muscle and the remaining is distributed in heart, liver and kidney, with less than 1% in biological fluids. Besides its primary role in the mitochondrial oxidation of long-chain fatty acids, carnitine is also involved in buffering of the acyl coenzyme A (CoA)-CoA ratio, branched-chain amino acid metabolism, removal of excess acyl groups and peroxisomal fatty acid oxidation. Fatty acid oxidation is the major energy providing pathway of the myocardium and its inhibition has been shown to impair myocardial function [1].

Recent studies have claimed the cardioprotective effects of omega-3 polyunsaturated fatty acids (PUFAs) for decreasing triglyceride levels and reducing the risks of stroke, sudden cardiac death, and all-cause mortality [2,3]. Even a 1% increase of the omega-3 index is associated with a 58% reduction in the risk of ventricular fibrillation [4].

Considering the involvement of carnitine in the metabolism of PUFAs, it is intriguing to investigate whether blood carnitine levels are altered during acute cardiac syndrome (ACS). In continuation to our previous work on cardiovascular biomarkers [5-8], we determined the blood levels of carnitine in acute myocardial infarction (AMI) patients to further research on exploring possible biomarker potential of carnitine for risk screening or prognosis of acute coronary syndrome.

This study was conducted on 50 AMI patients (21 STEMI and 29 NSTEMI) admitted to Prince Sultan Cardiac Center, Riyadh and King Khalid University Hospital, Riyadh, Saudi Arabia. We used 144 age-matched male normal subjects for comparative evaluation. The mean ages of STEMI and NSTEMI patients were 54.38 ± 12.7 years and 59.34 ± 10.77 years, respectively. The diagnosis of AMI was made by the European Society of Cardiology/ American College of Cardiology (ESC/ACC) diagnostic criteria for AMI. Serum troponin-T was analyzed using a commercially available sandwich ELISA kit (Roche Diagnostics, Germany). The exclusion criteria included recent surgery, active infection, chronic inflammatory diseases, significant hepatic or renal dysfunction and malignancy. All the subjects used in this study were Saudis. The protocol of this study was approved by our Institution Ethics Review Board for human studies and all the patients signed informed consents.

The levels of carnitine in the blood spots were determined by using a NeoBase non-derivatized MS/MS kit (Perkin Elmer, USA) and liquid chromatography-tandem mass spectrometry. The internal standard of carnitine was reconstituted with 1 ml of NeoBase extraction solution followed by its dilution to 1:110 to get the daily working solution of internal standards. Paper punch outs (3.2 mm diameter, equivalent to 3.1 μl of blood) of control and patient samples were individually placed in respective wells of a clear microplate and 100 μl of working solution of the internal standard was added to each well. The plate was sealed with an adhesive cover to minimize evaporation and then shaken (750 rpm) at 45°C for 45 min. The cover was removed and the aliquots (75 μl) of the well contents were transferred to a V-bottomed microplate before injecting to API 3200 LC-MS/MS (Applied Biosystems, USA). 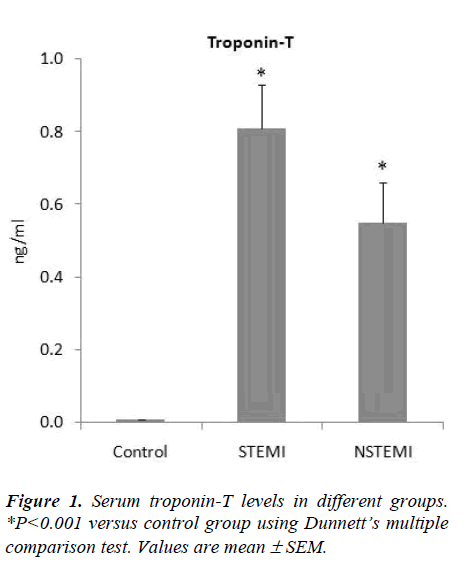 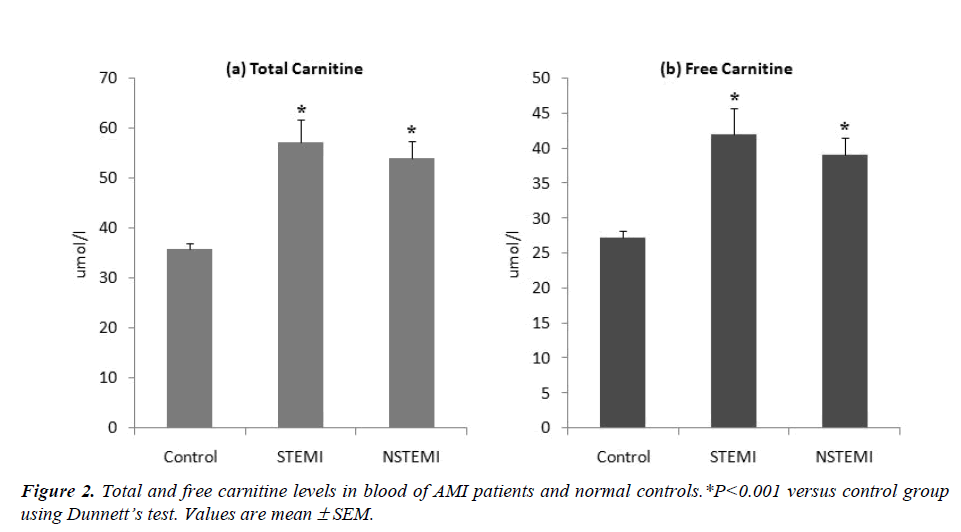 We observed significant increase in total and free carnitine levels in the blood of AMI patients as compared to healthy controls (Fig. 2). Rizzon et al [9] have also reported significant increase in free carnitine in the sera of 28 AMI patients as compared to 11 healthy controls suggesting that ischemia associated with AMI induces a loss of free carnitine from myocardium. Bartles et al [10] have shown that during each single attack of angina there is a release of carnitine from the heart into the coronary sinus. The myocardium is unable to synthesize carnitine so it has to extract this compound directly from the blood via high affinity carnitine receptors on heart cells [11]. However, impaired carnitine uptake in coronary artery disease (CAD) patients does not allow balancing the loss of carnitine during acute ischemia [12]. The dramatic increase of free carnitine in blood, as observed in our study, may be attributed to reduced uptake and/or increased leakage of carnitine from ischemic myocardium (Fig. 3). 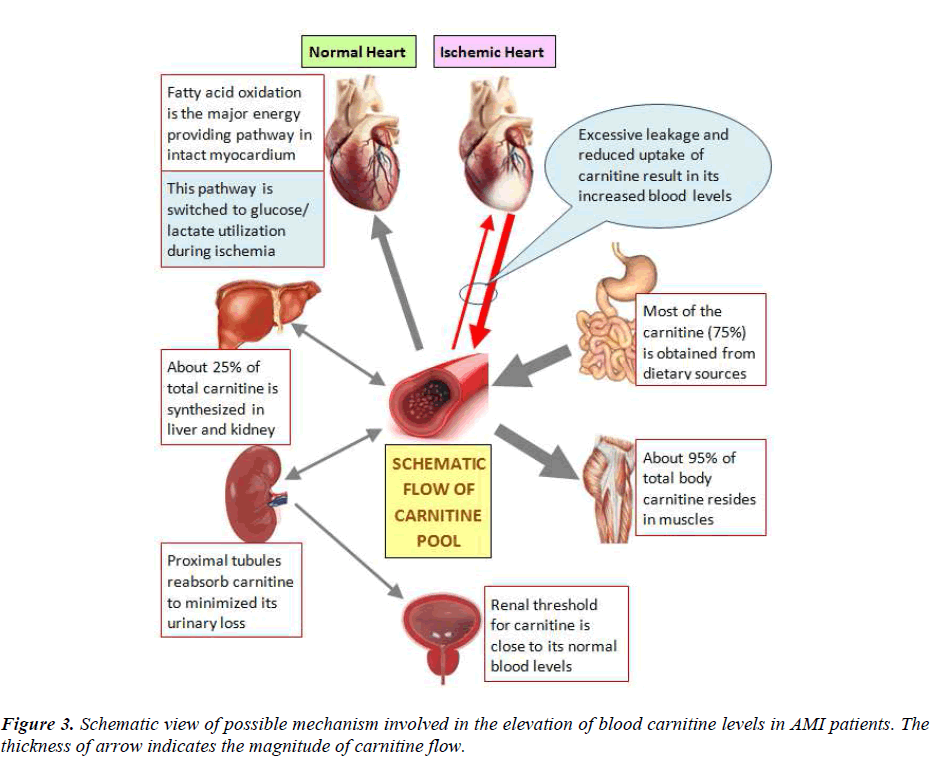 Figure 3: Schematic view of possible mechanism involved in the elevation of blood carnitine levels in AMI patients. The thickness of arrow indicates the magnitude of carnitine flow.

The loss of carnitine from ischemic myocardium would impair the lipid metabolism, thereby compelling the cells to look for alternate pathways for energy production in the event of energy crisis. The extraction of glucose was found to be greatly increased in ischemic myocardium despite the reduction in absolute glucose uptake at low coronary flow-rates [13]. Lactate is another substrate which can be easily converted to pyruvate and used for gluconeogenesis. Lactate production due to the stimulation of anaerobic adenosine triphosphate (ATP) production pathway could be a protective adapted response under ischemic conditions [14]. Regitz et al [15] have demonstrated that alterations in glucose and lactate metabolism may occur in heart failure. Recently, we have shown significant increase in serum lactate dehydrogenase (LDH) activity in AMI patients [6].

Regitz and Fleck [16] have also reported two-fold greater activity of myocardial LDH in dilated cariomyopathy. The combination of reduced myocardial carnitine levels and activation of LDH indicates a switch of myocardial metabolism from preferred fatty acid utilization to preferred glucose or lactate utilization. L-propionylcarnitine has been shown to prevent ischemia-induced ventricular dysfunction in coronary heart disease, not by affecting the myocardial oxygen supply-demand ratio but as a result of its intrinsic metabolic actions, increasing pyruvate dehydrogenase activity and flux through the citric acid cycle [17]. However, the amino acid pathway does not seem to be of particular importance in the production of ATP compared to glycolysis, in the event of myocardial ischemia [18].

The authors extend their appreciation to the Deanship of Scientific Research at King Saud University, Riyadh, Saudi Arabia for funding the work through the research group project No. RGP-VPP-009.