To elucidate the birth defects of children in women received In Vitro Fertilization-Embryo Transfer (IVF-ET) by conducting a meta-analysis. We conducted a systematic literature search to identify original studies of birth defects in IVF-ET before Feb 2016. Eligible studies were retrieved via both computer searches and manual review of references. The summary difference estimates between groups were calculated based on the Weighted Mean Difference (WMD) with its 95% Confidence Interval (CI). Sensitivity and publication analyses were performed after the pooled analysis. A total of 15 original studies of 189376 new born were included in this study. Meta-analysis showed an increased level of birth defects rate in women received IVF-ET (Z=8.67, P<0.01). There was no significant publication bias in the included studies (P for Begg’s test=0.86, P for egger’s test=0.16). Congenital malformation in IVF-ET group was significantly higher than that in the control group (P<0.05) and the level of OR was 1.29 (95% CI, 1.20, 1.41). Our results demonstrated that there was an increased level of birth defects rate in women received IVF-ET.

The rate of birth defects following In Vitro Fertilization Embryo Transfer (IVF-ET) varies from 3.4 to 9.0% [1-3]. The comparison of intracytoplasmic sperm injection and IVF children taking part in an identical follow-up study did not show any increased risk of major malformations in the intracytoplasmic sperm injection group [4]. Control selection (national or clinical control) from a different population creates the problem of differences in screening methods [5], management of pregnancy, and perinatal care between cases and controls [1,2]. In both cases, only stratification procedures reveal the influence of assisted reproductive technology on the incidence of birth defects. However, the results between studies were inconsistent [6-8]. In response, we conducted the first meta-analysis by pooling together the results from all published original studies. Our purpose was to examine the rate of birth defects in women received IVF-ET.

We aimed to identify all publications reporting the rate of birth defects in women received IVF-ET. Our literature search was conducted with a systematic literature search before July 2014. The study was in accordance with Meta-analysis of Observational Studies in Epidemiology (MOOSE) guidelines [9]. The databases included PubMed, MEDLINE, Springer link, Science Direct, Chinese National Knowledge Internet (CNKI) and EMBASE. The search strategies in our analysis were as following:

In-vitro fertilization or reproduction techniques or intracytoplasmic sperm injection) and (children or child or infant or neonatal) and (birth defects or chromosomal aberrations or chromosome abnormal or congenital malformations. There was no any language restriction of our literature retrieve, while the trial objective should restrict as human. In order to screening additional relevant data, all the potential related references after paper were manually searched. The manual retrieve procedure was performed by two independent investigators. Any ambiguity among the researchers was resolved by consensus and original data.

Criteria for inclusion and exclusion

The mainly included criteria for our study were as following: (i) the study should be an original research, which mentioned the women received IVF-ET and numeric rate of the birth defects. (ii) The primary outcome was presented as birth defects, which can be collected to make a pooled quantitative analysis. (iii) There was controlled group and corresponding quantitative data in original study. The exclusion criteria were: (i) there was no usable data reported. (ii) Duplicates data. (iii) Reviews narrate or comments. (iv) Letters to editors, abstracts in conference or non-peer-reviewed journals.

Two reviewers independently extracted information from each article using standard forms, the extracted data concerned first author, year of publication, location of the study, sample size in controlled group and IVF-ET group, mentioned outcome measures and baseline characteristics. When more than one data were presented in the same study, we separately treated them as different study once the data were no cross effect between different controlled group or IVF-ET group. Any disagreements were resolved by consensus. The primary outcome was urinary nerve growth factor.

The eligibility of each study was assessed independently by two investigators. We assessed the methodological quality of the studies by means of the previously published recommendations for systematic reviews of observational studies. The key points of the current checklist included the following terms: maintenance of comparable groups, baseline of demography, study design, aim of the study, discussion of possible confounders, data collection and bias. Any study that met fewer than four criteria present should be excluded.

All the statistical procedure were performed in STATA software version 12.0 (STATA, College Station, TX, USA). The Weighted Mean Difference (WMD) was used in the evaluation of difference baseline of pregnancy women between controlled group and IVF-ET group. Moreover, the Odds Ratio (OR) also used in the evaluation of ratio of birth defects rate. The 95% Confidence Interval (CI) of OR was calculated to identify the study outcome variation. It is considered statistically significant for outcome measure when the 95% CI excluded zero. Heterogeneity was assessed by the Cochran’s Q test, with a 10% significance level.

On the other hand, the I2 statistic was adopted to interpret the degree of heterogeneity. A fixed effect model was performed in the data comparison section unless the heterogeneity degree was I2>50%, in which case a random effects approach was used to adjust for the combined estimate. Potential publication bias was assessed by Egger’s line regression and Begg’s funnel plot. Sensitivity analysis was performed by excluding the older studies. For all Meta analyses, two side p<0.05 was considered statistically significant.

A total of 235 articles were retrieved initially, there were 182 papers were not in line with our inclusion criteria, 25 relative papers were exclusion after read the titles and abstracts. 2 papers of remained 28 studies report the results only with figure, 6 papers report the data with unmergeable results, and data in the other 5 studies were incorrect or unbelievable due to their primary designs. Finally, we identified a total of 15 original studies of 189376 new born mentioned birth defects rate in women received IVF-ET according to our above mentioned criteria [10-24].

A detail flow diagram of our search and selection was shown in Figure 1. Characteristics and quality assessment of these studies are summarized in Table 1. 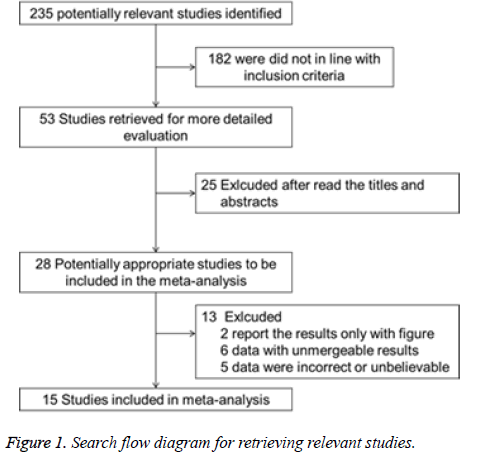 A total of 189376 new born were involving in our study. There was no gender, age or Body Mass Index (BMI) dividing in 15 studies. Thus our study cannot make subgroup analysis based on these demographic characteristics. The range of publication year was range from 1997 to 2010. 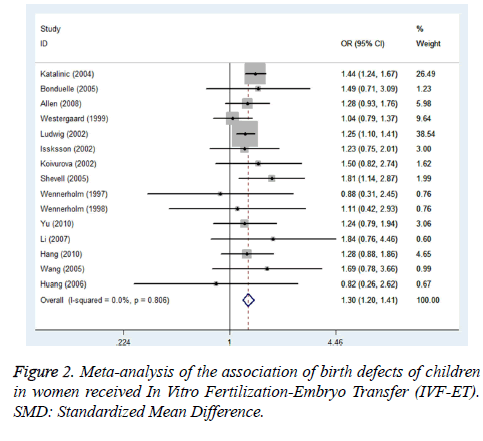 We also conducted a sensitivity analysis to investigate the robustness of our findings. In our analysis, we excluded the oldest study published by Wennerholm in 1997.

We were able to assess publication bias in the primary outcome. The degree of asymmetry was not statistically significant by both Begg’s test and Egger’s line regression (P for Begg’s test=0.71, P for egger’s test=0.38).

The first test tube baby in the world, Louise Brown, was born on 25th July 1978 after In-Vitro Fertilization and Embryo Transfer Technique (IVF-ET) by Edwards et al. in Oldham, England [25]. A few days after the delivery of the first test tube baby in United Kingdom., an Indian team from Kolkata led by (Late) Dr. Subhas, an excellent cryobiologist and (Late) Dr. Saroj, a well-known gynaecologist–announced the birth of ‘Durga’ [26], following a test tube baby procedure, on 3rd October 1978. Developmental defects in the enamel present important clinical significance since they are responsible for aesthetic problems, dental sensitivity, dentofacial anomalies, as well as for a predisposition to dental caries [27]. In the field of public health, developmental defects in the enamel have taken on a high level of importance for being predictors of dental caries. Populations affected by these changes require as a priority preventive intervention and early treatment. There are very few epidemiological studies done on the prevalence of developmental defects in the enamel of deciduous dentition. The prevalence rates of developmental defects in the children showed great variability.

We have pooled all available related evidence to discuss the birth defects of women received IVF-ET through the metaanalysis method. In this analysis, we identified that the birth defects rate were significantly higher in women received IVFET than that in controlled participants. To the best of our knowledge, there is no a comprehensive assessment of the relation mentioned birth defects of women received IVF-ET. This is the first meta-analysis of original studies on the potential difference of birth defects in women received IVFET. Our present study is a meta-analysis based on the clinical trial which included 189376 participants. As we know, prevalence study is undertaken to support the existence of association between suspected cause and disease. While the prospective cohort study does not be interfered by investigators and it is more suitable for long-term follow-up and owns high strength evidence. Whereas, RCT often needs to be end at the scheduled termination time, and the follow-up time is often shorter. On the other hand, a well-designed diagnostic study always can minimize the interference or potential confounding factors of the participants through the corrected multivariable analyses. While these function cannot be conducted in a RCT study.

Use of matched controls to evaluate the perinatal effects of IVF-ET on the incidence of major birth defects demonstrates that the risk because of the method itself is minimal. The matching procedure for establishment of a control group will clearly most closely reflect the relative risk of the assisted reproductive technology method. Differences in absolute risk of congenital abnormalities can be influenced by maternal age, certain maternal diseases, medications, toxic habits, environmental toxic effects and population variation. The different prenatal screening methods applied (e.g., nuchal translucency, chorionic biopsy) and national guiding principles concerning prenatally detected malformations can also significantly modify the perinatal outcome concerning congenital anomalies. Therefore, it is very important to collect safety data prospectively as assisted reproductive technology has been showing a dramatic increase worldwide in infertility therapy.

In summary, our meta-analysis of all relevant original studies showed a significant increase rate of birth defects in women received IVF-ET. While the further studies are also required to better confirm the findings.