Introduction: Colorectal cancer (CRC) is a major disease and a leading cause of mortality and morbidity worldwide. The expression of various genes changes in CRC. This study aimed to investigate differentially expressed genes (DEGs) in CRC tissues and to predict important pathways associated with CRC. Methods: DEGs between cancerous and non-cancerous tissues from 17 patients with CRC were screened using Affymetrix HG-U133 Plus 2.0 microarray data downloaded from the Gene Expression Omnibus (GSE32323). Next, functional and pathway analysis of DEGs was performed by Gene Ontology (GO) analysis and WikiPathways analysis using GeneSpring 14.5 software. Results and discussion: Compared with non-cancerous tissues, 3,856 DEGs were identified in the CRC samples, which included 2,015 upregulated DEGs and 1,841 downregulated DEGs, with the selection criteria of p < 0.05 and a two-fold change. The GO analysis identified 448 and 606 GO terms using the upregulated and downregulated DEGs, respectively. Interestingly, exosomes and extracellular vesicles were associated with the downregulated DEGs. A total of 240 pathways were associated with DEGs in CRC tissues. Taken above, I have identified candidate DEGs in CRC tissues and pathways. These candidate genes and pathways could be therapeutic targets for CRC.

Colorectal cancer (CRC) is the fourth most common type of cancer in the United States and the second leading cause of death due to cancer [1]. Recently, the incidence and mortality rates of colorectal cancer have increased in Japan. It is estimated that about 10% of men and 8% of women in Japan will be diagnosed with CRC during their lifetime [2]. CRC affects all racial and ethnic groups and is the most common in people aged 50 years and older. The stage of the cancer is indicative of how far it has spread, and determining the stage helps in choosing the most appropriate treatment. However, CRC remains a prominent global health problem, which may be attributed to a lack of comprehensive and systemic understanding of the underlying molecular mechanisms of carcinogenesis and progression.

CRC was one of the first solid tumours that was molecularly characterized, with several genes and pathways implicated in tumour initiation and growth [3]. CRC carcinogenesis is the result of a stepwise accumulation of genetic events occurring in oncogenes and tumour suppressor genes that deregulate the key signaling pathways that drive progression, such as Wnt/β- catenin [4], transforming growth factor beta (TGF-β) [5], epidermal growth factor receptor (EGFR) [6], mitogenactivated protein kinase and phosphoinositide 3-kinase (PI3K)-Akt pathways [7,8]. Therefore, CRC carcinogenesis and progression involve the activation or suppression of a complex network of molecules. However, the understanding of CRC carcinogenesis and progression networks is insufficient.

Khamas et al. examined gene expression profiles of cancerous and non-cancerous tissues from 17 patients with CRC using Affimetrix GeneChip Human Genome U133 Plus 2.0 Array [9]. In the present study, a bioinformatical analysis was performed to identify genes and pathways involved in CRC using these data sets (GSE32323).

The threshold criterion for the selection of DEGs was fold change of >2.0. Statistical analysis was performed using a moderated t-test with P<0.05. Benjamini Hochberg False Discovery Rate procedure was used for controlling falsepositives in multiple testing corrections. Selected DEGs were presented using volcano and scatter plots.

Identification of DEGs between CRC and normal samples

Normalization of each 17 pair data of cancer (CRC) and noncancerous tissues (normal) from CRC patients (Figure 1A) and Principal component analysis (Figure 1B) was performed using GeneSpring 14.5 software. Compared with normal samples, 3,856 DEGs were identified in CRC samples, including 2,015 up-regulated DEGs and 1,841 down-regulated DEGs (Figures 1C and 1D). 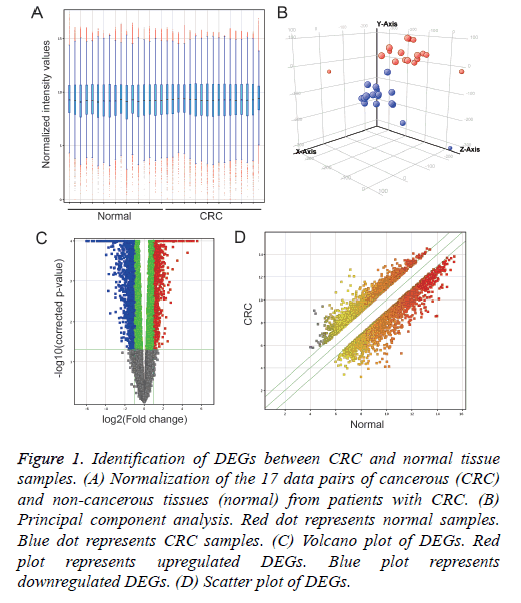 Analysis of biological functions and pathways altered by DEGs

Under p-value of 0.05, 448 GO terms were identified in the upregulated DEGs, and 606 GO terms were identified in the downregulated DEGs. Of these, the top 15 GO terms are presented in Table 1. Notably, cell-to-cell communication tool such as extracellular exosome (P=1.11 × 10-28) or extracellular vesicle (P=2.67 × 10-28) was significantly associated with the downregulated DEGs (Table 1). Exosomes are a subclass of extracellular vesicles that are released by all cell types, including cancer cells, and are involved in intercellular communication [10]. These exosomes have been detected in the cancer microenvironment, and emerging evidence suggests that they play a role in facilitating tumorigenesis by regulating angiogenesis, immunity, and metastasis [11]. This indicates that cell-to-cell communication is abnormal in the CRC microenvironment. Thus, analysis of exosomes is necessary for a better understanding of CRC carcinogenesis and progression in future studies.

Using a cut-off p-value of 0.05, 240 pathways were detected that involved up-regulated and down-regulated DEGs. Of these, the top 30 pathways are presented in Table 2. Using one of these pathways, the relationship among TGF-β, PI3K-Akt, and vascular endothelial growth factor (VEGF)-A-VEGF receptor 2 (VEGFR2) signaling pathways was predicted. The TGF-β signaling pathway plays an important role in cancer cell proliferation, growth, metastasis, and apoptosis and elicits both pro- and anti-oncogenic effects [5]. This pathway is controlled by positive regulators such as Smad2, Smad3, and Smad4 and negative regulators such as Smad6 and Smad7. Mutations in the TGF-β signaling components, including TGF-β receptors and cytoplasmic signaling transducers, are frequently observed in CRC. The regulatory effects of the TGF-β/Smad signaling pathway on cell growth inhibition and apoptosis contribute to CRC progression. Further, Smad4 deletion is a poor response marker in patients undergoing chemotherapy, whereas Smad7 deletion is a good prognostic marker in patients with CRC.

The PI3K–Akt signaling pathway leads to reduced apoptosis, stimulates cell growth and increases proliferation [8]. Genetic aberrations leading to PI3K-Akt hyper-activation are observed at considerable frequency in all major nodes in most tumors. In CRC the most commonly observed pathway changes are insulin-like growth factor 2 overexpression, phosphatidylinositol-4,5-bisphosphate-3- kinase catalytic subunit alpha mutations and phosphatase and tensin homolog deleted from chromosome 10 mutations and deletions. VEGFR2 signal transduction and trafficking pathways are mediated by VEGF-A ligands [14]. VEGFAVEGFR2 signaling pathway is involved in cell proliferation, chemotaxis and survival of endothelial cells. Angiogenesis is mainly regulated by this signaling pathway. In CRC, this pathway is associated with survival and distant metastasis of cancer cells.

The above mentioned pathway analyses suggested that the microarray data obtained in this study was indicative for colon cancer. As a novel pathway, the involvement of lncRNA in canonical Wnt signaling in CRC was predicted (Table 2). Taken above, novel candidate genes and pathways in CRC were identified by integrated bioinformatical analysis. These candidate genes and pathways may act as potential therapeutic targets for CRC.

This work was supported in part by a Hirosaki University Institutional Research Grant for Young Scientists, JSPS KAKENHI (no. 23790613), a Grant-in-Aid for Young Scientists (B), and a grant from the Ministry of Education, Culture, Sports, Science and Technology of Japan (MEXT).