Objective: To develop the tissue culture technique for 3 dimensional creation of bioengineered human endometrium in a culture dish for morphological and molecular studies of its components. Settings and design: This is a laboratory based observational study during the period of 2 years from May 2014 to May 2016. Patients/ Intervention: 100 samples of the endometrium were obtained by the procedure of single biopsy in a proliferative phase of the cycle. The cases of uterine and endometrial pathologies were excluded. The cells were trypsinised and cultured on matrigel. The culture was supplemented with sequential estradiol and progesterone. Main outcome measures: Development of glanduloepithelial, stromal and vascular components of the endometrium in the culture dish. Induction of pinopodes after progestogenic stimulation on estradiol primed endometrium. Results: The stromal cells were observed like fibroblasts at the floor of culture dish while the glanduloepithelial components were observed at the surface. The epithelial cells were differentiated in to pinopodes between day 3 to 5 exposure of progesterone which are the hallmarks of the process of implantation. Conclusion: The human endometrium can be bioengineered in the culture dish, which can be a novel model for implantation research. It can avoid the need of repeated invasive endometrial biopsies and replace studies based on animal models.

In spite of the astounding advances in the field of Assisted Reproductive Technology (ART), the implantation rate of various procedures has still remained 25% to 30% [1]. Failure of implantation is the result of either noncompeting embryo or nonreceptive endometrium or both [2]. The research in the field of creating good quality embryos is progressing rapidly. The introduction of new culture media, embryo monitoring systems like embryoscopes and metabolomics and methods to assess the genetics of the embryos like Preimplantation Genetic Screening (PGS) and Preimplantation Genetic Diagnosis (PGD), all help in creating and identifying the best embryos before they are transferred to the uterus.

However, the methods for assessment of the receptivity of the endometrium at a cellular level are not fully developed. The only reason is inability to get the endometrial tissue on multiple occasions, for morphological assessment and molecular studies as it requires the invasive procedures of endometrial biopsies.

The procedure of the endometrial biopsy cannot be performed during the conception cycle. Hence, most of the data on endometrial receptivity is based on noninvasive procedures like vaginal sonographic and colour doppler assessment of the endometrium. However, their positive predictive value is limited [3,4]. Doing repeated endometrial biopsies in the preembryo transfer cycle and identification of genes expression by Endometrial Receptivity Array (ERA) test are expensive and have limitations.

With this background, there is a need to develop a bioengineered human endometrium in a petri dish which will be useful as a tool for ‘Implantation Research’. Once such bioengineered endometrium in vitro is available, researchers can do morphological and molecular studies on the cells in culture dish. Similarly, the in vitro studies of the effects of various hormones and agents on each component of the endometrium can be done.

There will be no longer need of the traumatic endometrial biopsies. Additionally, the bioengineered endometrium can be used for co-culturing the embryo which will be sensitized before actually it is transferred to the endometrial cavity. The present study is an attempt to culture the human endometrium in a 3D (3 Dimensional) pattern.

The study was approved by the Institutional Review Board (IRB) and informed consent was obtained from all the patients. The study duration was of two years from May 2014 to May 2016. The patients who had decided to undergo the treatment of ‘In vitro Fertilization (IVF)’ in subsequent cycles were randomly selected.

After the basic hematological, biochemical and endocrine work up, they were advised to report between day 10 to day 12 of the unstimulated cycle (during proliferative phase) without any other medication. The transvaginal sonography was performed to note the endometrial thickness. The sample size for the present study was of 100 patients with the mean age of 32.5 years. The endometrial biopsy was taken only once when the endometrial thickness was between 8 to 10 mm by vagino sonography under short sedation by taking all aseptic precautions.

In only five cases the embryos were co-cultured with the bioengineered endometrium, to study the rate of their in vitro growth. However, none of these embryos were transferred. It was planned as a different project.

Human endometrium is a layered tissue and to develop it in a 3D culture, matrigel (BD) was used which acts as an extracellular matrix platform to culture all the layered components.300 microlitres of red matrigel were added to each well of four well dish and the dish was then kept in the carbon dioxide incubator for 30 minutes for the solidification of matrices.

The endometrial bits were initially washed several times with PBS (Phosphate Buffered Saline) to remove the red blood cells. These bits were taken in a 35 mm petri dish and were minced with number 20 surgical blade and forceps. The endometrial glands were isolated by mechanical dissection under stereo zoom microscope. The fine paste of the tissue so formed was transferred to 10 ml conical tube. 0.5 ml of enzyme Trypsin was added to the cell paste for 3 minutes and vigorous mixing of the cells with enzyme was performed at room temperature. The tube was then kept for 2-3 minutes at 37°C temperature for optimum action of trypsin. To prevent the over action of trypsin and to avoid over digestion of the stromal cells and glands, 1 ml of filtered human serum (patient’s own) was added, to neutralize the action of trypsin. The tube was then centrifuged at 2000 RPM for 20 minutes to get rid of trypsin. The supernatant was removed and 5 ml of Dulbecco’s Modified Eagle Medium (DMEM) and Ham F12 was added to the call pellet. This cell pellet was finally seeded over the matrigel floor in a 4 well dish.

The cell culture was done in the carbon dioxide incubator at 37°C at 5% CO2 atmosphere. The medium was replenished every 48 hours. 3-5 days after the primary 3D culture, the culture medium was supplemented with 17 β-estradiol dissolved in DMEM. After 4 to 5 days of estrogenisation, VEGF (Vascular Endothelial Growth Factor) was added to culture to induce angiogenesis. After 7 days of culture, the aqueous progesterone was added to the culture medium. The cellular changes were studied under phase contrast as well as scanning electron microscope (SEM), sequentially every day.

At 0 hours of cell culture, the stromal cells predominated in the culture plate which looked like circular isolated cell. The epithelial cells and glands looked like brighter circular cells which cultured in clumps. After estradiol stimulation the epithelial as well as stromal cells started rapid proliferation. The stromal cells got attached to the floor of the dish and elongated like fibroblasts. The epithelial cells started proliferating in the superficial plane and formed a classical cobble stone appearance with glandular differentiation. The addition of VEGF to the culture induced the process of angiogenesis. The newly formed vessels were appreciated by linear alignment of the endothelial cells and forming ring like structures (Figure 1). Finally, addition of the progesterone induced glandular proliferation and a sheet of 3D-bioengineered endometrium was identified on 3rd to 5th day of progesterone supplementations (Figure 2). The culture dish at this stage was subjected for scanning electron microscopy. The epithelial cells forming the pinopodes were clearly identified. Interestingly, the pinopodes were not only covering the entire surface of the endometrium but were also entering into the lumens of the glands (Figure 3)The results were reproducible and were consistently obtained in all the cases. In two cases of co-culture of the blastocyst with the bioengineered endometrium, the process of hatching was identified (Figure 4). 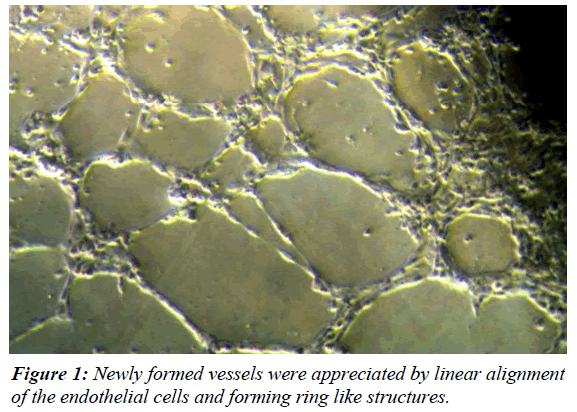 Figure 1: Newly formed vessels were appreciated by linear alignment of the endothelial cells and forming ring like structures. 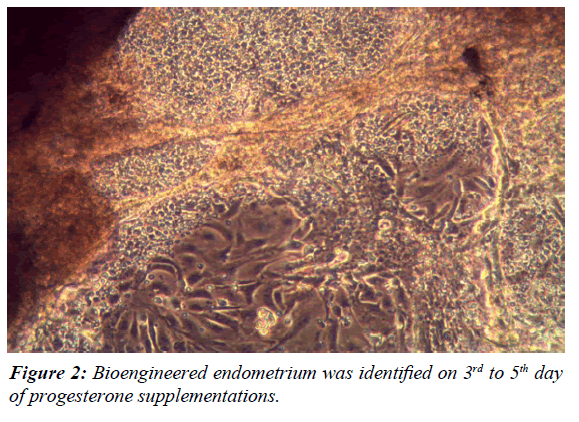 Figure 2: Bioengineered endometrium was identified on 3rd to 5th day of progesterone supplementations. 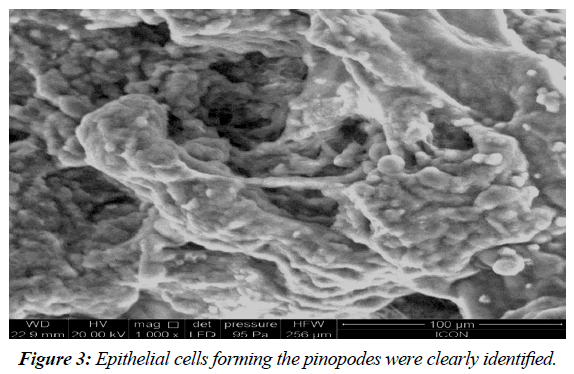 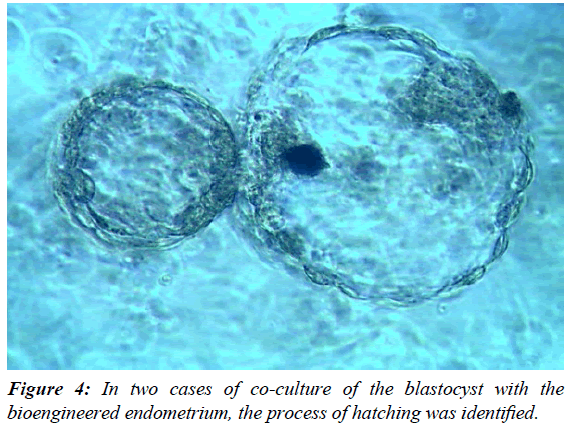 Figure 4: In two cases of co-culture of the blastocyst with the bioengineered endometrium, the process of hatching was identified.

In such cultures, only stromal cells dominate and the culture dish is fully confluent with their fibroblast like appearance. However, in the present 3D culture system, the proportion of the glanduloepithelial component, vessels and stroma remain like their in vivo existence. Interestingly, the in vitro cultured endometrium responds very well to the exogenous sequential endocrine stimuli of estradiol followed by progesterone. This microenvironment mimics in vivo endocrine events occurring during the window of implantation. The most notable change in the epithelium between 3rd to 5th day of progesterone exposure is the appearance of pinopodes. The pinopodes are indeed hallmark of the process of implantation [9]. They are believed to be involved in the process of embryo opposition and its subsequent attachment [10,11].

Scientists have made attempts to culture the glanduloepithelial as well as stromal cells in the canine [12] and rabbits [13] endometrial model. However, the animal studies cannot mimic the human conditions. In mice, NK cells are not present in the endometrium and during pregnancy there is minimal trophoblastic invasion [14]. Present study has the additional advantage of getting the human endometrial tissue with all its functional components, in the petri dish. This will definitely avoid repeated invasive procedures of endometrial biopsies.

In the present study, in two cases where the blastocysts were co-cultured with the bioengineered endometrium, the process of hatching was observed. It is hypothesized that such sensitized embryos will have better chances of implantation after transferring them actually to the endometrial cavity. It needs further research and evaluation.

The culture model of the human endometrium and cell sheet engineering has been tried in earlier studies [15,16]. However, the present study has gone further in depth and can be clearly used as a model for implantation research.