The present study was conducted to see the efficiency of alpha-lipoic acid in the active management of coronary heart disease patients (N=40). Alpha- lipoic acid is a vitamin like powerful antioxidant, which is soluble in both water and fat. At the membrane level we get protection before free radicals enters the cell. Any free radicals that make it past the first line of protection are combated right in the cell. It was seen that alpha-lipoic acid may have beneficial effects in reducing blood lipid profile and fibrinogen significantly (p<0.001) while homocysteine and triglyceride were decreased insignificantly (p>0.05). Observation strongly suggests that alpha lipoic-acid may have beneficial effects in reducing both old and new risk markers in coronary heart disease patients.

Coronary Heart Disease (CHD) is characterized by the accumulation of fatty deposits along the innermost layer of the coronary arteries. The fatty deposits may develop in childhood and con-tinue to thicken and enlarge throughout the life span [1]. The conventional modifiable risk factors for atherosclerosis and subsequent CHD are cigarette smoking, elevated cholesterol levels, hypertension and obesity [2,3]. Physical inactivity and diabetes are found to be clearly associated with increased risks of CHD. In addition to these well-established risk factors, the recent re-searches had lead to understanding of newer multifactorial causes of CHD in last five years. In the context many potential new markers of Coronary heart disease are under investiga-tions. These include the primarily atherogenic marker homocysteine and primarily thrombosis marker fibrinogen [4,5].

Numerous clinical studies in subsequent years have shown the possible CHD protective role of natural antioxidant vitamins A, C, E and alpha lipoic acid [4,6]. Lipoic acid is an example of an existing drug whose therapeutic effect has been related to its antioxidant activity. Within drug related antioxidant pharmacology, lipoic acid is a model compound that enhances understanding of the mode of action of antioxidants in drug therapy [7]. Still relation and interaction of various new risk factors with chances and severity of CHD is unsettled. In our country the trend of CVD/CHD is different than western countries so in the proposed study, we intend to find out the role of alpha lipoic acid on various old and new risk markers of CHD patients so as to proper measure can be advocated to decrease the incidence of CHD in Indian population.

The established non-diabetic male patients of coronary heart diseases were randomly selected from the outdoor and indoor attending patients of KPS PG Institute of Medicine, GSVM Medical College Kanpur. History, clinical examinations and routine investigations of all the patients were recorded. Each sub-jects was examined with its previous case history and physical examinations and advised to take their usual diet as prescribed by the physician. The subjects were given orally 200 mg alpha lipoic acid daily along with their prescribed diet for a period of one month. Fasting blood samples of each subject were col-lected between 8 to 9 am morning before supplementation and after one month of alpha lipoic acid administration. The blood samples were immediately processed to analyze/quantify the following old and new risk marker of CHD under study. 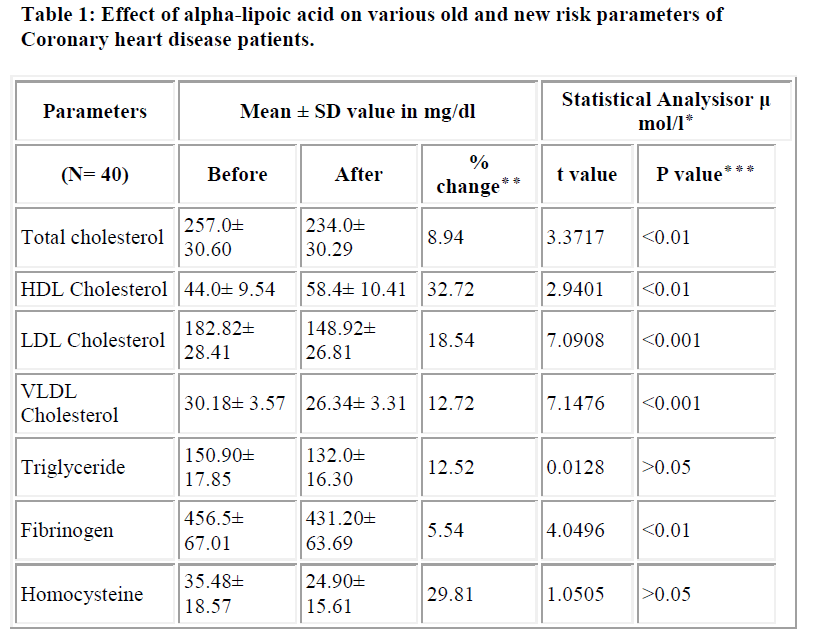 The profound effect of alpha lipoic acid supplementation in CHD subjects were observed on cholesterol scavenger HDL-C in-crease and triglyceride reduction in old risk markers and highly significant decrease in new risk markers. Alpha- lipoic acid is efficacious for moderate ischemia reperfusion and have a sig-nificant effect against cardiovascular diseases [8]. one of the theory also show the cardioprotective effects of dihydrolipoic acid in right heart hypertrophy during oxidative stress and sug-gested that alpha lipoic acid in its oxidised form (dihydrolipoic acid) improves cardiac functional recovery during post-ischemic reperfusion [9]. In the present study, supplementation of alpha lipoic acid shows significant effects on fibrinogen level in coro-nary heart disease patients. Alpha lipoic acid has also shown significant effect on old risk markers in this study. Lipoic acid remarkable ability to regenerate other antioxidants and squeeze the most out of them has been demonstrated in various ways. It has been shown that lipoic acid supplementation can prevent the symptoms of scurvy in vitamin C-deficient guinea pigs, and the symptoms of vitamin E deficiency in rats that were fed a diet lacking in vitamin E [10].

Although most studies on lipoic acid’s antioxidant properties and its central role in the antioxidant network have been carried out on laboratory animals, clinical trials on human beings are also being pursued. A study published recently in the journal Free Radical Biology and Medicine was designed to investigate the effect of alpha lipoic acid supplementation, both alone and in combination with alpha-tocopherol (the principal constituent of vitamin E), on various measures of oxidative stress in healthy people. The results of the study showed convincingly that lipoic acid is an effective inhibitor of both lipid oxidation and plasma oxidation, making it a valuable ally in our never-ending fight against heart diseases [8,11,12]. The above observation sug-gests that alpha lipoic acid may have beneficial effects in reducing both old and new risk markers in coronary heart disease patients.