Bilateral agenesis of the uterine arteries.

Case: 46y G2P0020 with a symptomatic fibroid uterus who desired uterine artery embolization for treatment. On angiogram, she had bilateral atretic uterine arteries with large, tortuous ovarian arteries supplying the uterus and fibroids. Embolization was aborted due to inability to achieve access to the ovarian arteries distal to the ovaries. Ultimately, the patient underwent an uncomplicated laparoscopic supracervical hysterectomy with resolution of symptoms.

Conclusion: Congenital bilateral uterine artery atresia is a rare occurrence. In their absence it is possible for the entire uterine blood supply to be derived from the ovarian vessels. This can present challenges for management via embolization.

Fibroid tumors are the most common benign condition of the female reproductive tract. Approximately 80% of black women and 70% of white women in the United States develop uterine fibroids [1]. Uterine artery embolization is an increasingly more common alternative to hysterectomy and myomectomy for fibroid-associated comorbidities. The success of uterine artery embolization is contingent on complete blockage of the vessels supplying the fibroid. For this reason, it is important to consider the wide array of pelvic vascular anomalies that can pose challenges in successfully completing these procedures. In this case, we illustrate an anatomic variation that precluded the patients preferred method of treatment.

The patient is a 46 year old G2P0020 with a 14 week sized leiomyomatous uterus with pelvic pressure and heavy menstrual bleeding. She had two prior terminations of pregnancy and had no desire for future pregnancy. After being counseled regarding options for symptomatic control of her leiomyomatous uterus, the patient opted for a uterine artery embolization.

A uterine artery embolization was begun in the usual fashion. Angiograms during the procedure showed bilateral atretic uterine arteries with the presumed right-sided uterine artery supplying only cervical and vaginal branches. Large, tortuous ovarian arteries provided all of the blood supply to the uterus and ovaries as shown in Figure 1. Sub selection of arterial access distal to the ovaries could not be obtained and therefore the embolization was not performed (Figure 1). 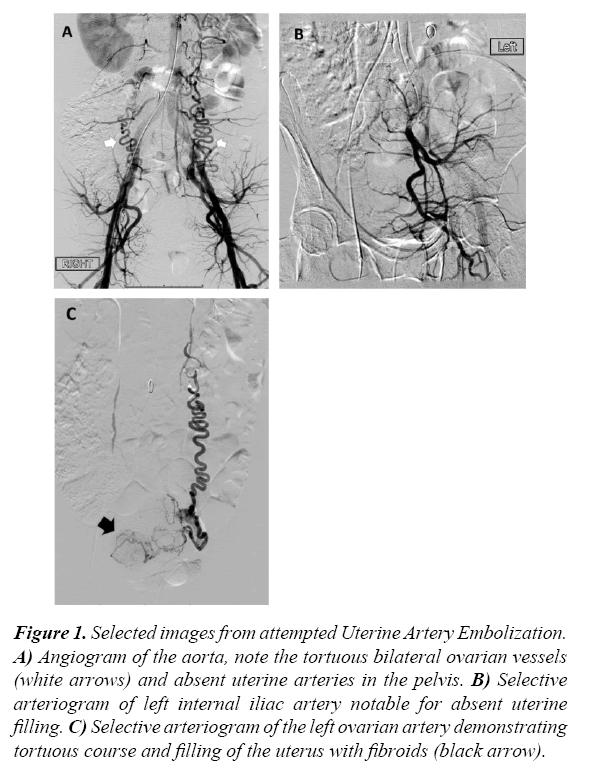 The patient was counseled after the procedure and opted for a laparoscopic supracervical hysterectomy. At the time of surgery, large, tortuous ovarian vessels were appreciated. Dissection was notable for absent uterine arteries as shown in Figure 2. The hysterectomy proceeded without complication and the postoperative course was unremarkable (Figure 2). 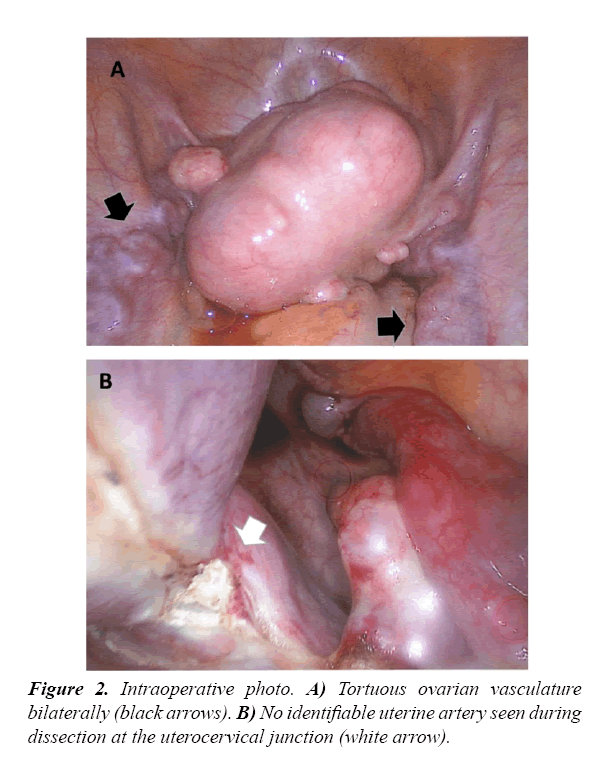 In the vast majority of cases, the uterine arteries are the primary blood supply the uterus and associated fibroids. This case illustrates an anatomic variation where the bilateral uterine arteries are absent. Congenital absence of the bilateral uterine arteries is rare and encountered in less than 1% of cases [2]. This is a known variant that has been commented on in the radiologic literature but has not been described in the gynecologic setting. This patient had a normal menstrual history prior to development of heavy menstrual bleeding associated with her fibroids, despite atypical vascular supply.

It is unclear what effect congenital absence of the uterine arteries would have on a pregnancy. In the reported case above, this patient had two pregnancies that were electively terminated in the first trimester. On review of the literature, no other reported cases are noted and as such we cannot draw any conclusions regarding potential pregnancy outcomes. It has been speculated that single uterine artery in the case of unicornuate uteri is associated with poor fetal growth secondary to sub-optimal vascular supply; however it is difficult to draw comparisons given the concomitant abnormal uterine body in those cases [3].

Aside from the absent uterine arteries, it is not uncommon for fibroids to derive their blood supply from alternate sources. Often, this is unappreciated until the patient undergoes angiography prior to embolization or until the time of surgery. Angiography during uterine artery embolization for fibroids or adenomyosis demonstrates collateral vessels in 5-12% of cases. The most common source of collaterals is the ovarian artery (3- 8%) followed by the inferior mesenteric artery (1.3%) [4,5]. A review of the literature includes cases with fibroid blood supply arising from a variety of other sources include the round ligament artery, internal pudendal artery, transverse colonic, and other anomalous vessels [2,4-7]. Typically, these collateral sources provide blood supply in addition to that derived from the uterine artery and are a known risk factor for failure of uterine artery embolization [2,7]. There are also cases where fibroids derive their supply exclusively from the collateral vessel. The majority of uterine fibroids are supplied by both uterine arteries but about 0.39% derives their blood supply from a single ovarian artery [7]. Embolization of the collaterals is sometimes possible but risks non-target embolization of other organs such as the ovaries and the colon.

Aberrant vascular supply to the uterus can affect the treatment options available to the patient. In this case, it was not possible to sub-select the ovarian artery distal to the ovaries and avoid non-target embolization of the ovaries. Because arterial collaterals and aberrant vasculature may warrant a more extensive embolization with increased procedure time or radiation exposure some experts have proposed a pre-procedural MRI angiography to aid in detection of vascular anomalies and to allow for appropriate procedure planning [8]. This may be of additional use in pre-operative planning for more complete patient counseling and would be of use to the surgeon for anticipation of surgical challenges that may be encountered intraoperatively.

It is important for the pelvic surgeon to be aware of the anatomic variations in blood supply to the uterus and associated fibroids as this may affect the available management options for a patient or present challenges during surgical intervention.