Normally brachial artery divides into it’s terminal branches namely radial and ulnar arteries at the neck of the radius in the cubital fossa. In the present study ,a case of termination of brachial artery at it’s commencement below the lower border of teres major is being reported. Both the terminal branches, ulnar and radial had superficial course along the medial aspect of biceps brachii. In cubital fossa, biceps tendon was flanked by ulnar and radial arteries on medial and lateral sides respectively. In the forearm, radial artery had more superficial course than ulnar artery. The study is done on the termination of the brachial artery and reported.

Brachial artery is the main artery of the arm. It is the direct continuation of axillary artery at the lower border of teres major muscle and.ends about a centimeter distal to elbow joint (at the level of neck of the radius) by dividing into radial and ulnar arteries [1].Text books of anatomy make a reference to ‘vas aberrans’ in the main brachio antebrachial pattern [2]. Treves and Rogers[3] 1947, Williams et al [1] that these connect the brachial or axillary artery with one or the other artery of forearm usually joining the radial. Treves and Rogers [3] called superficial brachial artery, a common anomaly as a vas aberrans. High origin of radial and ulnar artery forms the highest percentage of variations of brachial artery. Karlsson and Niechajev [4] and Compta [5] found that high origin of radial artery is the commonest vascular pattern variation of the upper extremity.

Out of 30 human upper limbs dissected by 1st year M.B.B.S. students in department of anatomy of Government Medical College, Aurangabad, only one left upper limb of a male cadaver showed variation in termination of brachial artery.

In left upper limb of a male cadaver, bifurcation of brachial artery into radial and ulnar arteries at the lower border of teres major was found. Both the arteries had superficial course in the arm along the medial aspect of biceps brachii and radial artery crossed biceps tendon superficially while passing through cubital fossa. 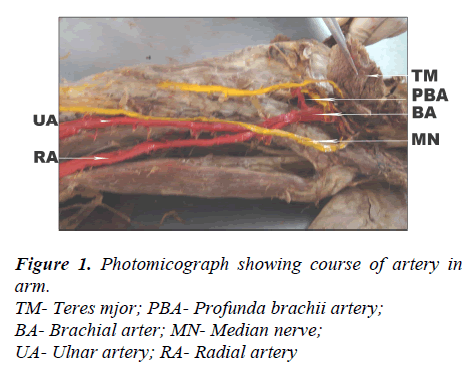 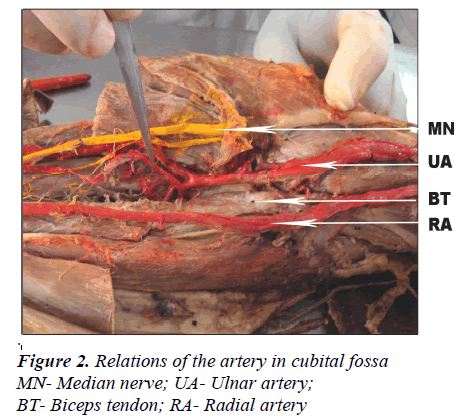 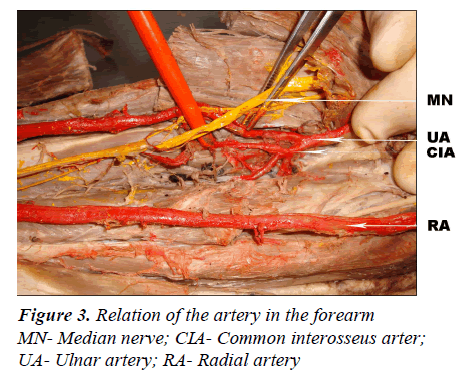 -It entered into the cubital fossa deep to the deep head of pronator teres.

-In forearm, it passed between superficial and deep group of flexor muscles with accompanying ulnar nerve on its medial side, and in upper part it gave common interosseus artery, which again divided into anterior and posterior interosseus arteries.

-It finally entered the hand by passing superficial to the flexor retinaculum lateral to pisiform bone and continued in palm as superficial palmar branch.

-In the middle of the arm, radial artery was crossed by median nerve from lateral to medial side. It entered into the cubital fossa by crossing the tendon of biceps brachii superficially and lateral to it’s tendon.

It finally entered into the palm and continued as deep palmar arch.

In cubital fossa, biceps tendon was flanked by ulnar and radial arteries on medial and lateral sides respectively.

The profunda brachii artery arose from the 3rd part of axillary artery. It passed in the posterior compartment of the arm with the radial nerve supplying adjacent muscles.

The axis artery of upper limb-bud is derived from the lateral branch of seventh intersegmental artery( subclavian). Proximal part of main trunk forms an axillary continuing as brachial artery and its distal part persists as the anterior interosseus artery.

a) Superficial brachial artery which continue in cubital fossa and bifurcate as usual into radial and ulnar arteries (3.6%).

Rosse and Rosse [10] stated that in approximately 30% of individuals there are two brachial arteries in an arm. The two arteries usually unite in cubital fossa and again divide into ulnar, radial arteries. If they don’t unite, the identity of the vessels is determined by their relation to the median nerve and their fate in the forearm.The normal artery, representing the axial artery of the limb, takes the usual course of the normal brachial artery and is crossed superficially by the median nerve. The anomalous artery is more superficial position and named as superficial brachial, ulnar or radial depending on branching pattern.

In present study, both the arteries were crossed by the median nerve superficially from lateral to medial side. So the term superficial brachial artery couldnot be used for any artery.

Vare and Bansal [20] reported a case with high division of brachial artery- the superficial is the brachial artey and deep continuing in forearm as interosseus complex.

William et al [1] have mentioned that brachial artery may bifurcate proximally and reunite to form a single trunk. It trifurcates proximally into ulnar, radial, common interosseus arteries. Sometimes slender vasa aberrantia connect the brachial artery to the axillary artery or to one of the forearm arteries usually the radial.

1) This variation may cause difficulties while measuring the blood pressure.

2) Diagnostically it may disturb the evaluation of angiographic images.

3) Interventionally accidental puncture of superficially placed arteries may occur while attempting the venepuncture.

4) It is prone for damage during orthopedic and plastic surgeries.

When aberrant arteries are present it may be mistaken for a vein or in case of injury may cause severe bleeding..

Anomalies in origin and course of principal arteries have practical importance for orthopedicians, radiologists and vascular surgeons.