Rapamycin and its analogs (rapalogs), those are the mTOR inhibitor, exhibit immunosuppressant and antitumor activity, and extend survival of patients with metastatic renal-cell carcinoma (mRCC), advanced breast cancer and Pancreatic Neuroendocrine Tumour (PNET). Drug Instructions of Everolimus and Temsirolimus mention that patients taking any medicines for heart conditions or high blood pressure might need to be prescribed a different medicine or the dose of rapalogs may need to be changed. However, whether rapamycin induced cardiotoxicity and the mechanisms need further disclosed. Here, we showed that the primary cultured neonatal rat cardiac myocytes viability was reduced significantly after rapamycin treatment for 72 h. On the other hand, the cells with 3- Methyladenine (3-MA, an autophagy inhibitor) pre-treatment increased cell survival rate compared with rapamycin treatment alone. These results suggest that autophagy plays an important role in rapamycin-mediated primary cultured neonatal rat cardiac myocytes death.

Rapamycin (Sirolimus), initially discovered as an antifungal metabolite, is an immunosuppressant which has been approved for clinical use as a drug for the prevention of renal transplant rejection and heart transplant rejection and vasculopathy [1-3]. Subsequently, rapamycin was found to possess antiproliferative properties in mammalian cells [4]. Currently, the mammalian target of rapamycin (mTOR)-mediated pathway is widely implicated in cancer and has been validated as an important target for chemotherapy [5,6].

Two rapamycin analogs, temsirolimus and everolimus, were approved by the Food and Drug Administration (FDA) in 2007 and 2009, respectively, for the treatment of advanced Renal Cancer Carcinoma (RCC) [7,8]. To date, the FDA approved the use of rapamycin analogs for patients with several kinds of tumours, such as progressive neuroendocrine tumours of pancreatic origin, advanced HR+, HER2-Negative breast cancer and progressive GI and Lung neuroendocrine tumour [9].

The sirolimus-eluting coronary stent was approved in Europe in Apr 2002 and in US in Apr 2003, following the antiproliferative effects of rapamycin in smooth muscle cell [10,11]. Inhibiting the mTOR by rapamycin would reduce restenosis and cardiac remodelling. In contrast, some studies showed that activating the mTOR signalling may mediate the beneficial effects of acute and delayed preconditioning to ischemia and several preconditioning mimetic drugs. Thus, rapamycin analogs may have either beneficial or detrimental effects depending on the experimental model and perhaps dose/ concentration and timing of administration [12,13].

In the present study, we showed that rapamycin treatment for 48 h induced cardiac myocytes damage in primary cultured neonatal rat cardiac myocytes, and autophagy involved in this process.

Sprague-Dawley rat at 6 weeks of age were purchased from the Animal Research Center of Zhejiang Academy of Medical Sciences and housed in the laboratory animal center of Taizhou University at 22°C with a 12 h light/dark cycle. All animals used in the study were housed and cared for in accordance with the Chinese Pharmacological Society Guidelines for Animal Use. The work was approved by the Committee on the Ethics of Animal Experiments of the Taihou University. All surgery was performed under sodium pentobarbital anesthesia, and all efforts were made to minimize suffering. Rapamycin was purchased from LC Laboratories (Woburn, MA, USA). 3-Methyladenine (3-MA) was purchased from Selleckchem (Shanghai, China).

Neonatal cardiomyocytes from the ventricles of 1-3 day old Sprague-Dawley rat hearts were dissociated by an adaptation of the method of Simpson and Savion. Briefly, the ventricles were digested with 0.125% Trypsin at 37°C [14,15]. Dissociated cells were preplated for 2 h in whole DMEM medium to selectively remove non-muscle cells. Myocytes were then plated in 6-well dishes (1 × 106 cells/well) in a 5% CO2 incubator and maintained in DMEM solution containing 20% foetal bovine serum/0.1 mM Brdu for an additional 72 h.

We first investigated the effects of rapamycin on cardiac myocytes proliferation in primary cultured neonatal rat cardiac myocytes. As shown in Figure 1, the cell viability was reduced significantly by rapamycin treatment. The rapamycin 1 nM~1 μM groups (~65%) already had a significant decrease in cell survival rate vs. control (P<0.05 vs. Ctrl). The survival rates in Rapamycin 10 μM and 100 μM was just about 40% and 20% respectively. 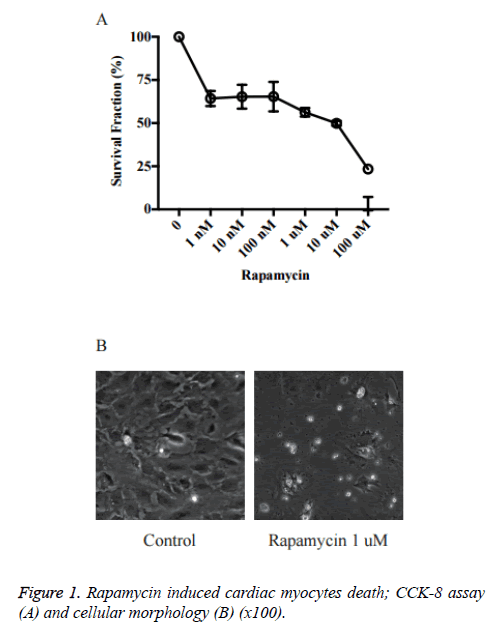 As shown in Figure 2A, a diffused distribution of LC3 was observed in the control cells, whereas a punctate pattern of LC3 was observed in the rapamycin‑treated cells. To further confirm whether rapamycin was able to induce autophagy in the primary cultured neonatal rat cardiac myocytes, an immunoblotting analysis was used to detect the cleavage of the LC3 protein. As shown in Figure 2B, western blot analysis showed a significantly increased expression of cleaved LC3. 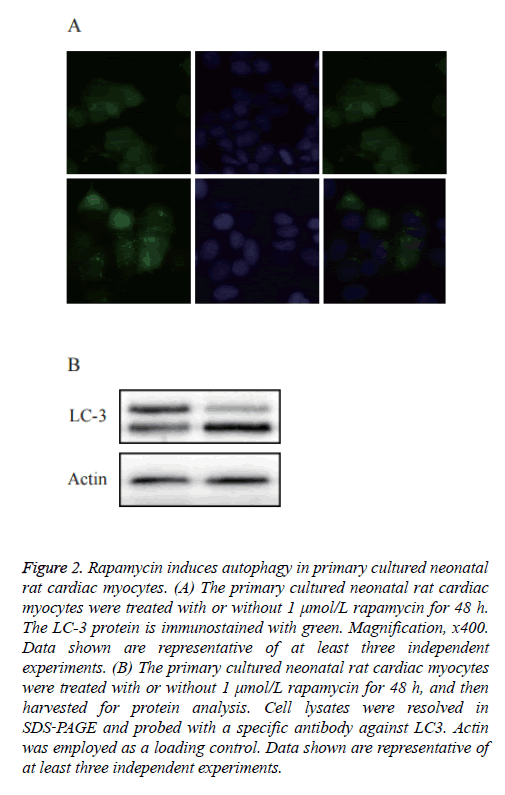 To confirm the role of autophagy in rapamycin-induced cell death of primary cultured neonatal rat cardiac myocytes, we pre-treated primary cultured neonatal rat cardiac myocytes with 3-Methyladenine (3-MA) to block autophagy (Figure 3A). As shown in Figure 3B, in control group, rapamycin could increase the cleaved LC3 significantly, while it did not happen in the 3-MA pre-treatment group. It reveals that 3-MA decreased rapamycin-induced autophagy. 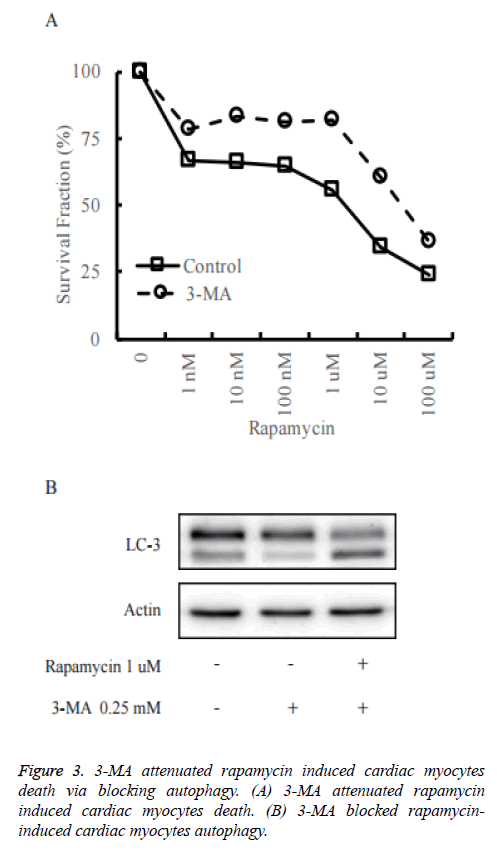 The cell death assay was measured by CCK-8 assay. The death rate was decreased when treated with rapamycin in 3-MA pretreated primary cultured neonatal rat cardiac myocytes in comparison to control cells.

Rapamycin analogs have been widely used for cancer therapy, organ transplantation and Drug-eluting stent [9]. However, cardiac toxicity caused by rapamycin analogs was not well revealed. Just as Garrett reviewed, rapamycin should have beneficial effects to reduce restenosis and cardiac remodelling [12]. In contrast, several papers have also shown that activating the mTOR pathway may mediate the beneficial effects of acute and delayed preconditioning to ischemia and several preconditioning mimetic drugs, so drugs which inhibit mTOR such as rapamycin may have either beneficial or detrimental effects depending on the experimental model and perhaps dose and timing of administration. Rapamycin-induced autophagy should help cardiac myocytes survival in the stress of hypoxia/re-oxygenation, but wild autophagic stimulation might lead to cell death. Here, we showed that rapamycin did induce cardiac myocytes death in primary cultured neonatal rat cardiac myocytes, possibly through activation of autophagy pathway. Then we also showed that autophagy inhibitor (3-MA) could decrease rapamycin-induced cardiac myocytes death by blocking autophagy.