We report about a case of atypical Kawasaki disease presenting with persistent fever and pneumonia unresponsive to antibiotic therapy. No other signs or symptoms suggestive for Kawasaki disease were evident at illness onset or thereafter. Despite the puzzling clinical presentation, diagnosis has been made timely. Intravenous immunoglobulin was administered within the first two weeks of fever, along with aspirin, but the child recovered only after steroid therapy. Although a transient coronary dilation was evident at diagnosis, no long term cardiac sequelae were observed. Atypical Kawasaki disease usually affects infants and toddlers and, due to delayed diagnosis and treatment, is strongly associated with an increased risk of permanent heart damage. The lung consolidation as clinical presentation of atypical Kawasaki disease has been described in a very few cases. A high index of suspicion is required in children with refractory pneumonia, fever and persistently high inflammatory markers. In these cases, pediatricians should consider atypical Kawasaki disease as a possible alternative diagnosis, because early clinical suspicion and prompt treatment with intravenous immunoglobulin and aspirin dramatically abate the high risk of permanent coronary damage.

In the so-called atypical KD, that usually affects infants, a part from fever, the clinical signs can be fewer or different from those of the classic disease, so that its diagnosis is more difficult and often delayed [3,4]. If the disease is left untreated, 10-15% of patients develop coronary artery lesions that could be permanent and KD is currently the leading cause of acquired childhood heart disease in western countries [5]. Fortunately, timely treatment with Intravenous Immunoglobulin (IVIG) during the first 10 days of illness, by day 7 if possible, dramatically abates the risk of developing coronary artery aneurysms from 25% to 4% [2,6].

Despite its importance, a timely diagnosis of KD is often a challenge because it still relies on non-specific clinical signs, and no definite laboratory tests have yet been identified. Diagnosis of KD can be even more difficult in patients who do not fulfill the diagnostic criteria. A clinical presentation with less than the required criteria for KD and/or unusual clinical features (“incomplete” or “atypical” KD) is more common in infants younger than 6 months or children older than 5 years of age and very often causes a delay in diagnosis and treatment, that results in an exceeding incidence of coronary aneurysms [7-13].

Due to its systemic nature, multiorgan involvement is possible in both the classic and in the incomplete/atypical forms of the disease, but, in contrast to other vasculitides, lung involvement is very rare, usually asymptomatic and characterized by a wide range of clinical and radiological findings [14-27]. Among the possible clinical presentations of atypical KD, isolated lung involvement is considered a very uncommon feature and almost all the cases reported in literature involve children in the first year of life. [17,23,24]. The largest Italian epidemiology study on KD did not report any case of pneumonia even in the atypical form of the disease [28]. We describe a child with unresolving pneumonia as the main presenting symptom of atypical KD. 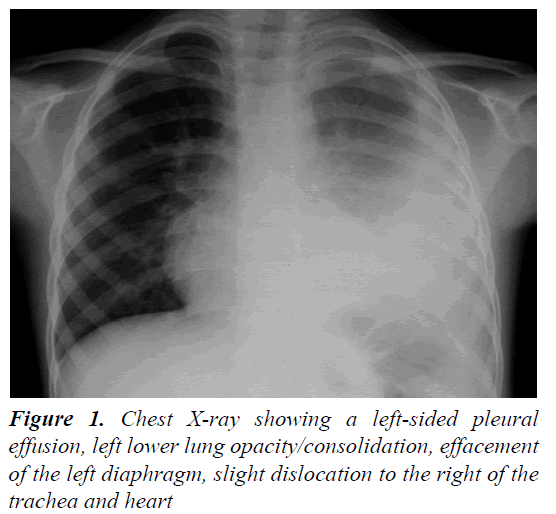 One male patient with prolonged fever, clinical signs of refractory pneumonia, eventually diagnosed as having atypical KD, is described in this report. No other symptoms or signs suggestive for KD were evident, neither at the onset of disease, nor when the diagnosis was made or during the follow-up. The first line therapy with two doses of IVIG, although it was administered before the 10th days, failed to achieve remission of clinical symptoms and reduction of the inflammatory markers. After the second line treatment with steroids, complete remission of clinical and radiological findings, along with normalization of the laboratory parameters were obtained. A coronary dilation was observed in the acute phase of the disease but it proved to be transient with complete normalization of coronary diameter within two months of diagnosis. 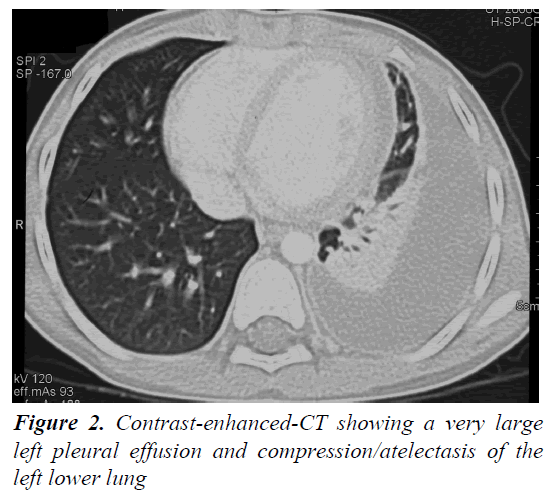 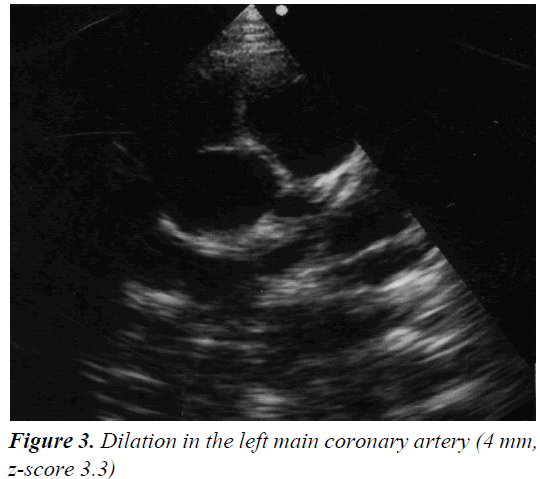 The present case is noteworthy for at least two reasons.

The first noteworthy feature of the case is the age of the patient, who was about 5 year old. In literature atypical KD is reported to be more common in children younger than 6 months. Our experience demonstrates that atypical KD must be suspected regardless of age.

The second noteworthy feature of the case is the clinical presentation of atypical KD as an apparent unresolving lobar pneumonia and prolonged fever, without any other clinical symptom or sign of the disease.

In literature there are very few reports about lung involvement in KD and in almost all cases KD followed respiratory infection as its complication. In our case lung involvement was the first and the main clinical feature of atypical KD.

The diagnosis of KD was initially suspected because persistent fever and suggestive changes in laboratory markers and, ultimately, was confirmed when coronary artery changes were detected on echocardiogram. The child was promptly and successfully treated with IVIG and aspirin as the first line and then with steroids, and the coronary dilation resolved.

Our experience shows that, in front of any case of protracted fever unresponsive to antibiotic therapy and inflammatory markers persistently high, also when signs and symptoms of pulmonary involvement are the prominent features of the clinical picture, the possible diagnosis of atypical KD should be considered, preferably before the evidence of coronary damage.

Moreover, our case confirms that, by limiting the delay in IVIG treatment (early in the second week of fever), possibly with the addition of the steroid, persistent heart damage can be successfully avoided, also when coronary artery changes are already evident, because they can be transient and reversible with therapy.

In conclusion, our experience underscore the need to maintain a high index of suspicion for atypical KD in case of infants and older children presenting with continuous fever and pleural effusion mimicking refractory pneumonia, coupled with increased inflammatory parameters and high platelet count in the second or third week of illness. In these cases, it is mandatory to perform periodic cardiac echocardiogram to rule out possible transient or persistent cardiac damage. The potential life-threatening cardiovascular complication of KD not properly and timely treated, emphasizes the importance of early diagnosis and treatment, especially in case of atypical disease.