Purpose: To report the first presentation of atypical Cogan ? s syndrome with Serpiginous choroidopathy. Patient: 38-year-old man presented with 15 days of blurred vision in both eyes. He had a history of bilateral hearing loss and severe tinnitus and nausea from 1 year ago. Result: on examination, visual acuity of counting fingers at 1 meter in the right eye and 6/60 in the left eye were recorded. The anterior chamber had +2 inflammatory cells and anterior vitreous had +1 cells in both eyes. The fundus examination in both eyes showed an area of geographic chorioretinal hypopigmented atrophy and scar at the posterior pole. Conclusion: This is the first presentation of atypical Cogan?s syndrome with Serpiginous choroidopathy without any other ocular manifestations.

Cogan’s syndrome is a collection of symptoms and signs with unknown underlying causes. In typical form, the most common ocular finding is interstitial keratitis, although it can present itself in other ways such as scleritis, episcleritis, uveitis, iritis, retinal vascular disease, conjunctivitis, and papilloedema too [1-3]. The audiovestibular findings are similar to Ménière disease including vertigo, nausea, body imbalance, vomiting and tinnitus; the vestibular signs are secondarily associated with progressive hearing loss, leading to deafness in a period 1-3-months [4]. An interval between the onset of audiovestibular and ocular manifestations should be less than 2 years.

A 38-year-old man presented to the eye clinic with 15 days of blurred vision in both eyes. he had a history of bilateral hearing loss from 1 year ago, he said that his hearing loss started in the right ear with severe tinnitus and nausea then extended to the left side, the diagnosis of Meniere’s disease was made at that time also He had a history of hypothyroidism since 2 years ago that was on 25 micrograms Levothyroxine daily.

He had sought multiple consultations for his new problem before he came to the clinic but had no defined diagnosis. He denied any family history of the ocular disease up to that time.

Ophthalmological examination revealed a visual acuity of counting fingers at 1 meter in the right eye and 6/60 in the left eye. The anterior chamber had +2 inflammatory cells and anterior vitreous had +1 cells in both eyes according to the Standardization of Uveitis Nomenclature (SUN) Working Group grading for intraocular inflammation [5]. Corneas were normal in both eyes. Intraocular pressure in the right eye was 12 mmHg and in the left eye was 15 mmHg.

A fundus examination; in the right eye an area of geographic chorioretinal hypopigmented atrophy and scar at the posterior pole were seen which centrifugally extended from superior of the optic disc to the macula in a jigsaw-like pattern, in the left eye an area of chorioretinal atrophy was seen that was started from the optic disc and extended to inferior of the macula in the serpentine pattern (Figure 1). 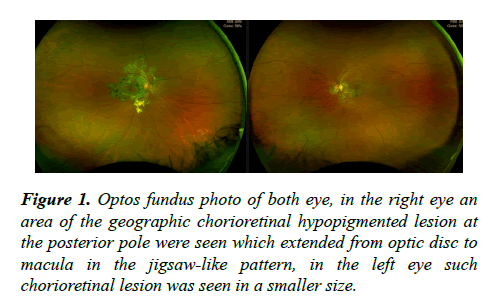 Figure 1: Optos fundus photo of both eye, in the right eye an area of the geographic chorioretinal hypopigmented lesion at the posterior pole were seen which extended from optic disc to macula in the jigsaw-like pattern, in the left eye such chorioretinal lesion was seen in a smaller size.

Optical coherence tomography (OCT) in both eyes included a juxtafovea disruption of the ellipsoid and photoreceptors layers and choriocapillaris hyper-reflectivity. At the level of the outer layers of the retina, we found hyper-reflective appearance which was originated from the RPE proliferation. The retinal inflammation in the active disease was presented with a minimal sub-retinal fluid that over lied to the area with the disease, the inner retina was spared.

Fundus fluorescein angiography of the right eye revealed large early hypo-fluorescence of active lesions with a gradual increase in fluorescence across the phase which surrounded with hyperfluorescent margins that extended to the macular area, the same smaller lesion was seen in FA of the left eye which was extended to the inferior juxta-foveal area.

The patient had a history of taking systemic corticosteroids (1 mg/kg/day prednisolone) previously at the time of hearing loss which was tapered in one month. After ocular manifestation, 1 mg/kg/day prednisolone and 100 mg/day azathioprine were prescribed, topical steroid and cycloplegic were given. After 3 weeks of treatment, the patient’s visual acuity was increased (OD: count finger at 3 meters and OS:20/60). His hearing in both ears was impaired in all frequencies with specific high frequency drop off.

His systemic steroid with slowly tapering and immunosuppressive therapy is ongoing. Optos fundus autofluorescence imaging of both eye 3 months after treatment were captured which revealed large early of hypo autofluorescent lesions at the posterior pole which extended from optic disc to macula in a jigsaw-like pattern that was due to retinal pigmented epithelium loss in these areas but no hyper autofluorescent margins were seen which means that lesions were inactive (Figure 2). 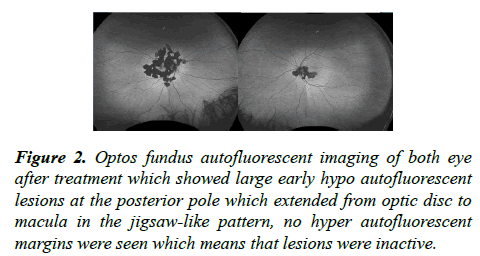 Figure 2: Optos fundus autofluorescent imaging of both eye after treatment which showed large early hypo autofluorescent lesions at the posterior pole which extended from optic disc to macula in the jigsaw-like pattern, no hyper autofluorescent margins were seen which means that lesions were inactive.

Cogan's syndrome is a rare autoimmune vasculitis, with unknown pathogenesis. The diagnosis should be considered when there are ocular abnormalities followed or preceded by audiovestibular symptoms. patients with any of the following findings are classified as having atypical Cogan’s syndrome: 1- inflammatory ocular findings including episcleritis, scleritis, retinal artery occlusion, choroiditis, retinal haemorrhage, papilloedema, exophthalmos or tendonitis with or without Interstitial keratitis, patients with isolated conjunctivitis, subconjunctival haemorrhage or iritis are also classified as having atypical Cogan ’ s syndrome if these inflammatory ocular manifestations are associate with Ménière like episodes within 2 years. 2-typical ocular manifestations associate within 2 years with audiovestibular symptoms different from Ménière like episodes. 3-delay of more than 2 years between the onset of typical ocular and audiovestibular findings [6].

This is the first presentation of atypical Cogan’s syndrome with Serpiginous choroidopathy without any other ocular manifestations. Serpiginous choroiditis is known as a primarily idiopathic disease but may be associated with an underlying autoimmune process [7,8]. It presents an inflammation asymmetric disease at the level of the inner choroid, which is related to the retinal pigment epithelium and the choriocapillaris [9,10].

We certify that there is no conflict of interest with any financial organization and certify any disclosure of funding received for this work from any of the following organizations: National Institutes of Health (NIH); Wellcome Trust; Howard Hughes Medical Institute (HHMI); and others.