Outcome of the management of blunt splenic injuries over a 9-year period was exam-ined in the present study. A retrospective chart review of 61 patients above the age of twelve admitted into the hospital with splenic injuries from May 1994 to May 2003 in Aseer Central Hospital, Abha, Kingdom of Saudi Arabia (A level II regional trauma centre). The outcome measures include complications during management and mortal-ity. Detailed analyses were carried out using the student t test, chi-square test, and means, regression analysis. Splenectomy was performed in 58 cases (95.1%) while the splenic injuries were managed non-operatively in 3 cases (4.9%) all of whom survived. The mean duration of hospital stay was 18.8 ± 21.31 days (Range = 1-123 days). The overall mortality rate was 23%, with a mortality rate of 7% seen in the correlation with infectious morbidity (all P < 0.05).The overall mean Injury Severity Score (ISS) was 37.6. ISS score was significantly higher in those who died and those who had serious infectious complications compared to those with unremarkable recovery (56.8 and 39.2 vs. 32.4; p=0.04). Linear regression analysis revealed the presence of shock on arrival, an ISS >25, associated head and chest injuries were the most significant factors for prolonged hospital stay. Careful identifications of patients who might benefit form the surgery is required and ISS might be helpful.

Spleen is the most commonly injured organ in blunt ab-dominal trauma, and can lead to increased morbidity and mortality and longer hospital stays. In the past, splenic injury had been an absolute indication for splenectomy. However, in the last decade or so, the management of splenic injuries has undergone a lot of debate and changes including refinement of the indications for non-operative management (NOM). NOM increased from 34% to 46% in recent years [1]. It also replaced splenorrhaphy as the most common method of splenic preservation [2]. NOM becomes the treatment of choice for most of splenic inju-ries and splenectomy is reserved for severe injuries; thus splenectomy is more frequently performed than splenor-rhaphy [3]. In a prospective study comparing non-ope-rative and operative treatment, Smith et al. reported a suc-cess rate of 93% with NOM in patients who are appropri-ately selected [4]. However, the overall success rate of NOM varies from 20-100% depending on particular pro-tocol use. The selection of patients for NOM is still con-troversial [5].

The purpose of this study is to examine the outcomes of the management of blunt splenic injuries over a 9-year period ,to assess hospital lengths of stay, and factors pre-dicting the outcomes.

A retrospective study of all patients hospitalized in Aseer Central Hospital, Abha (A level II regional trauma centre) during the 9-year period 1994 to 2003 with a diagnosis of blunt spleen injury were included in this study. We se-lected adults above the age of 12 , for whom we had all the interesting data available. Data available from the hospital database included the patient’s age, pre-existing comorbidity conditions, hospital length of stay (HLOS),mortality rate, and procedure codes to calculate the Injury Severity Score (ISS), grade of splenic injury, and proce-dure frequency. The outcome variable was categorized as having complete recovery, serious infectious complicati-ons or death.

Each injury is assigned an Injury Severity Score (ISS) and is allocated to one of six body regions[Head, Face, Chest, Abdomen, Extremities (including Pelvis), and External]. The ISS is an anatomical scoring system that provides an overall score for patients with multiple injuries. The 3 most severely injured body regions have their score squared and added together to produce the ISS score.

In order to determine the association between outcome variable and ISS the one-way ANOVA was used. To in-vestigate risk factors for prolonged HLOS, linear regres-sion analysis was used, with the HLOS as the dependent variable. The covariates included in the model were shock on admission, associated head injury, associated neck injury, presence of infectious complications and ISS.

Retrospective review of 61 consecutive splenic trauma patients with injury score of 25 or greater admitted to Aseer Central Hospital, Abha (A level II regional trauma centre) during the period May 1994 to May 2003 were included in the analysis. Predictably, the patients were predominantly male (95.1%) and young (mean age, 29.7 ± 15.13 years; range, 14-84 years) (table 1). Initial find-ings of radio imaging assessments are listed in table 2 The main clinical presenting features in the patients were rela- ted to blood loss, associated head and chest injuries. On admission, the mean systolic blood pressure was 106.25 ± 22.47. Only 19.3% of the patients had a systolic blood pressure (BP) less than 90mm Hg. In 18.6% of cases, the systolic BP was above 120 mmHg. 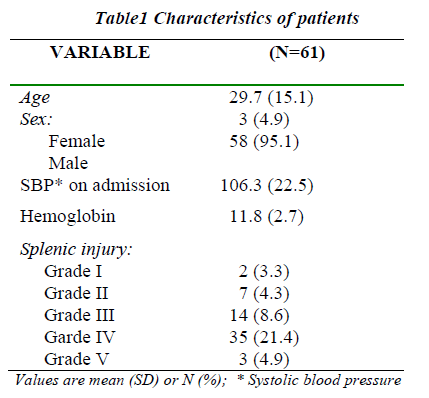 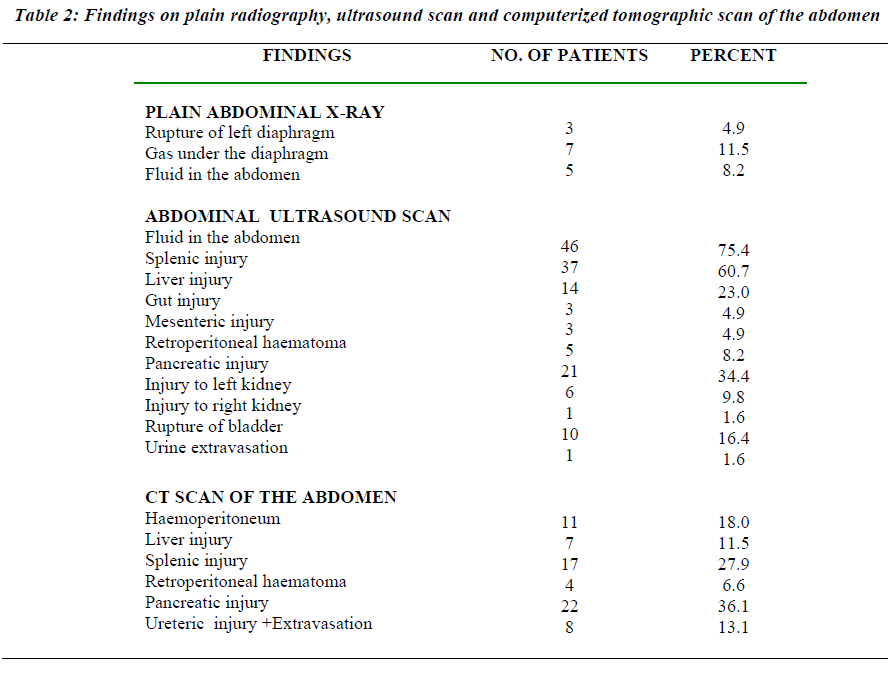 The splenic injury confirmed by diagnostic peritoneal lavage, abdominal ultrasound and/or abdominal computed tomography (CT) scan carried out in stable circulatory conditions. The grading of the splenic injuries was: GradeI-2 (3.3%), II-7(4.3%), III-14 (8.6%), IV-35 (21.4%), and V-3 (4.9%). The choice of treatment was related to the extent of the splenic damage and associated injuries.

Splenectomy was performed in 58 cases (95.1%) while the splenic injuries were managed non-operatively in 3 cases (4.9%) all of whom survived. The mean duration of hospital stay was 18.8 ± 21.31 days (Range = 1-123 days). Forty two patients had unremarkable recovery, 5 patients had major infectious complications but survived and 14 patients died. Of the 14 patients who died, 11 had a major infection with multiple organ failure. Major infec-tion was defined as sepsis syndrome (4 patients), bron-chopneumonia (10 patients) and major wound or soft tis-sue infection (2 patients).

The overall mean of Injury Severity Score was 37.6. Comparison of ISS among the three different outcome groups revealed significantly higher score in patients with fatal outcome and in patients with serious infectious complications compared to patients with unremarkable recovery difference in mean scores (Table 3).

The presence of shock on arrival, an ISS >25, associated head and chest injuries were the factors identified on mul-tivariate analysis as most significantly correlated with prolonged HLOS (all P < 0.05) [Table 4). The overall mortality rate was 23 per cent, with a mortality rate of 7 per cent seen in the first 48 hours.

NOM of splenic injury is considered the standard care of management in those hemodynamically stable patients. Laporatomy is indicated in patients with low systolic BP (< 90mmHg) which does not respond to fluid resuscitation and blood transfusion [6,7].

Despite controversial finding of recent years management of splenic injury still requires surgical intervention, espe-cially in adults [8, 9]. Splenorrhaphy became an accepted method for salvage of the spleen after recognition of Overwhelming Post Splenectomy Infection (OPSI) [2, 10, and 11]. In our retrospective cohort, mortality was 23% and postoperative complications of infectious origin occurred in 31% of 61 admitted patients. The mortality rate in our sample was similar to mortality of 21% re-ported from Serbia [5]. Postoperative infectious complica-tions reported by Kairaluoma MI et al were 30Relatively high post-operative infectious complications rate and mortality point to importance of operative ap-proach of splenic trauma and better selection patient for surgery and avoid unnecessary risk. This approach was also recommended by Guillon et al [13]. %[12].

CT scanning became an excellent tool to characterize splenic injury in patients with blunt trauma [14]. Ac-cepted indications for operation in adults include: hemo-dynamic instability, bleeding > 1000 mL, transfusion of more than 2 units of blood, or other evidence of ongoing blood loss. We have found that the severity of illness is well assessed by ISS. The presence of shock on arrival, an ISS >25, presence of head and chest injuries were the fac-tors identified on multivariate analysis most significantly associated with poor outcome (all P < 0.05). These variable of prognostic importance were similar with those reported by Smith et al [4] hemodynamic stability, age less than 55years, CT scan appearance of grade I, II, or III injury, absence of concomitant injuries precluding ab-dominal assessment, and absence of other documented abdominal injuries.Therefore, appropriate management of shock and head and chest injuries might decrease postoperative hospital stay and subsequently morbidity and mortality rate. The overall mean duration of hospitalization was consistent with the length of 20.2 days reported by Cubertafond et al [15]. The comparison of ISS score along the different outcomes demonstrated that those with fatal or near fatal outcome had significantly higher ISS scores. Ability of ISS to predict these outcomes have been shown by Bi-jlsma et al [16] and Peitzman et al [17]. Our study dem-onstrated that ISS score is a potent predictor of survival as well as occurrence of major infection. This could be used to select patients for operative treatment.

The ISS significantly correlated with trauma outcome, and might be used for distinguishing patients who might benefit from the surgery from those who don’t. However this is a retrospective review and discusses only the outcome on discharge. There is always a possibility of missing information in the chart. This is a limitation of the study.

In Saudi Arabia, the most common cause of splenic inju-ries in adults is MVA. The MVA characteristics, associ-ated injuries, and complications observed during the man-agement directly impact on mortality. Careful identifica-tions of patient who might benefit from the surgery is re-quired and ISS might be helpful.