Stylohyoid ligaments calcified are found incidentally through imaging. Morphological characteristics can determine the development of different pathological compression levels of the head and neck. We report a case of an asymptomatic bilateral calcification of stylohyoid ligaments visualized by panoramic radiography and cone beam computerized tomography reconstruction. The correct description and visualization of this anomaly is important to carry out an accurate diagnosis and appropriate treatment in patients who present it.

A male patient, 55 years old, with no relevant medical history and without symptomatology from any dental pathology was studied. He presents an osteofito in the right mandibular condyle, and considerable ossification of the left styloid process. A panoramic radiograph is initially taken, when this condition was found. The patient looks for treatment of teeth 1.2 and 2.5 with fixed singular prosthesis (Figure 1A). A cone beam computerized tomography (CBCT) examination was then performed showing ossification of both ligaments (Figures 1B-1E). The left stylohioid ligament, in the measurement of the proximal section, is continuous and with a pseudoarticulated aspect (Figure 1B). On the right side, the stylohioid ligament is discontinuous (Figure 1D). Degenerative bone remodelling process is also observed in both condyles, right condyle is greater in size. The ossified right ligament has a length of 39.2 mm (Figure 1E). The left ligament is longer (77.7 mm) (Figure 1C). 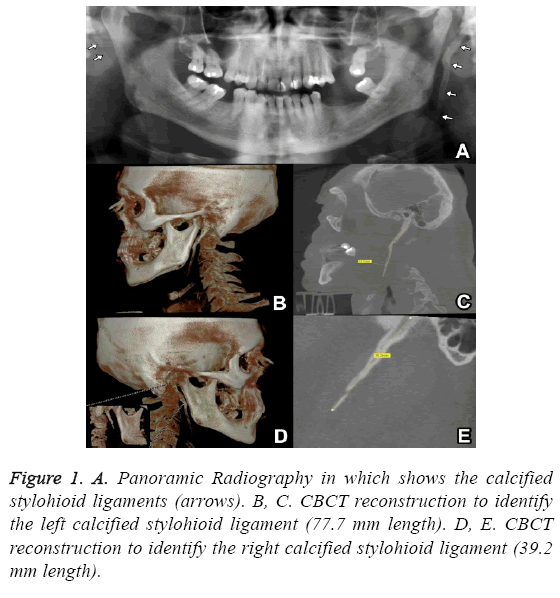 It may be difficult to detect this anatomical variation using a conventional 2D panoramic radiography. Although in this case the radiography allowed identifying the ossified styloid process, we consider that CBCT technology is very important exam for the diagnostic of this anatomical conditions which makes possible to perform reconstructions in three dimensions, multi cut images and precisely identification of morphological characteristics [24]. In patients with symptoms due to ossified stylohyoid ligament, the CBCT exam could help to perform an accurate diagnosis, because as symptoms are diverse and not specific, patients usually look for treatment in different areas such as otolaryngology, neurology, psychiatry and dentistry.