Vascular endothelial growth factor (VEGF) plays a critical role in angiogenesis. Several VEGF polymorphisms were associated with development of different diseases in human. More commonly studied VEGF single nucleotide polymorphisms (SNPs) are -2578C/A, - 1154G/A, +936C/T. Our aim was to develop an asymmetric PCR on Light Cycler melting curve analyses for VEGF +936C/T to remove hook effect which is commonly observed in routine real-Time PCR with melting curve analyses. Real–time PCR with equimolar and asymmetric primer concentration and hybridization probes in LightCycler was performed and melting peaks for hook effects were compared. Melting curve was used for the genotyping. Asymmetric primer concentration (sense: antisense=3:1) neutralized the hook effect and resulted in the easy genotyping for the detection of VEGF SNP +936C>T. An asymmetric real-time PCR with melting curve analysis could be applied when hook effect is observed with common real-time PCR protocol.

Vascular endothelial growth factor (VEGF) is a major angiogenic factor and a prime regulator of endothelial cell proliferation [1]. The VEGF gene is located at chromosome 6p21.3 and consists of eight exons. At least 30 single nucleotide polymorphisms (SNPs) in this gene have been detected [2]. Most commonly studied SNPs of VEGF are 460C/T, -1154G/A, -2578C/A, and +936C/T. A number of studies have shown an association of VEGF SNPs with different diseases such as breast cancer, prostate cancer [3-6], diabetic retinopathy [7], coronary arterial disease [8], Alzheimer’s disease [9], stroke [10], acute cerebral infarction [11], Parkinson's disease [12], and mi graine [13]. Our group is involved in studying the importance of VEGF SNPs (-2578C/A, -1154G/A, +936C/T) in strokes and associated diseases. Most of the studies used the PCR-RFLP technique for the determination of VEGF genetic polymorphism; which is very tedious and time consuming. A very few studies introduced Real-Time PCR followed by fluorescence–labeled probe hybridization and melting curve analysis by the Light Cycler [14-17]. However, with commonly used protocol for LightCycler real –time PCR, we experienced poor amplification and melting peaks in the VEGF SNP +936C/T with ‘hook effect’ phenomenon [18]. Compared with other optimizing parameters, the relative concentrations of sense primer and antisense primer are important and a few studies demonstrated the beneficial effect of asymmetric Real-time PCR. In this study, we carried out continuous analysis with various primer concentrations of an asymmetric Real-time PCR to nullify the hook effect and pro duce easily distinguishable melting peaks between wild type and mutated types.

After obtaining informed consent, peripheral blood samples were collected for genomic DNA isolation from stroke patients and controls attending the neurological clinic at CBNU, Jeonju, Korea. Stroke, a form of cerebrovascular disease, was defined as fast growing clinical sign of acute, focal or global disturbance of neurological function lasting more than 24 hours or symptoms lasting less than 24 hours and with evidence of a cerebral infarction in clinically relevant areas of the brain according to brain imaging either by CT or MRI and electrocardiography. DNA was extracted using Quick Gene DNA whole blood kit S (Life Science, Japan), according to manufacturer’s instruction. DNA purity and quantity were determined by absorbance reading at 260 and 280 nm in UV/Visible spectrophotometer, Amersham Bioscience, Cambridge, England. Real-time PCR with melting curve analysis were performed in the LightCycler (2.0) instrument (Roche Applied Science, Germany) for the detection of VEGF SNP +936C>T. The following primers and labeled probes were designed and synthesized by Sigma- Aldrich, Japan.

The temperature ramp rate was 20 °C/s. Emitted fluorescence was measured at the end of each annealing step at the F2/F1 channel. Immediately after amplification, melting curve analysis was performed on the LightCycler. The melting curve protocol included raising the temperature at 95 °C for 30 s, cooling to 45 °C for 1 min and slow heating to 85 °C at a rate of 0.2 °C/s. During this time fluorescence measurements were continuously collected in the F2/F1 channel. The plot of the fluorescence vs temperature (F2/F1 vs T) of the LightCycler (2.0) software is useful for the monitoring of a successful amplification and for the identification of different genetic alleles by their different melting peaks. But with this commonly used protocol for LightCycler Real–Time PCR, we experienced poor amplification and genotyping/melting peaks with ‘hook effect’ phenomenon for VEGF SNP +936C/T study. We performed the asymmetric Real-Time PCR in which we applied the different concentrations of sense and antisense primer (1:1, 1:3 and 3:1); as primers are more important among the standardization components and finally the ‘hook effect’ was nullified.

Real-time PCR amplification for the VEGF SNP +936C>T detection proved quite robust. The PCR product was free from other by-products or primer-dimers and at its correct size (119 bp) as estimated by agarose gel electrophoresis. By using common protocol of PCR (sense: antisense primer ratio= 1:1), we experienced ‘hook effect’ (Fig.1a and 1b), which is the sign of very efficient real- Time PCR [18]. In hook effect, the amplified DNA strands are reannealed before the probe can bind to generate fluorescence in later cycles of the PCR. 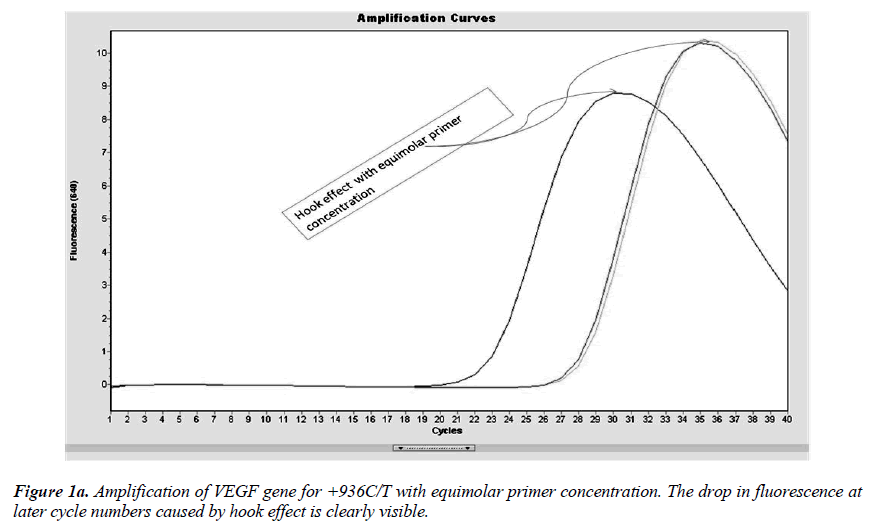 Figure 1a: Amplification of VEGF gene for +936C/T with equimolar primer concentration. The drop in fluorescence at later cycle numbers caused by hook effect is clearly visible. 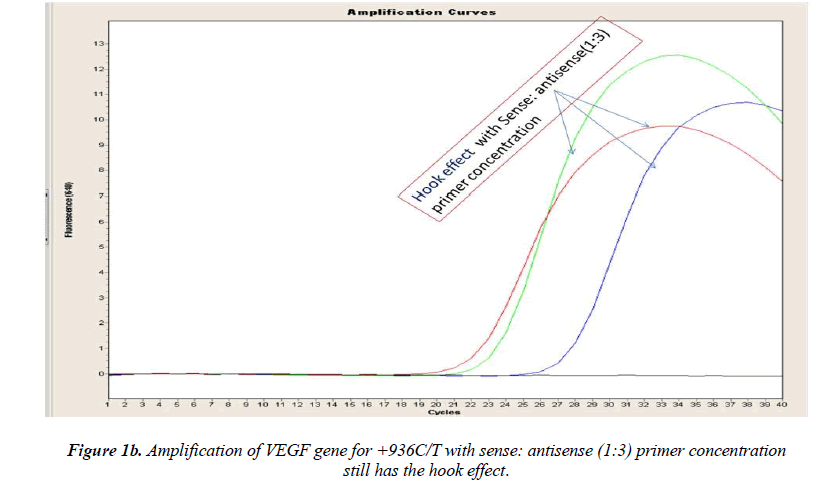 Figure 1b: Amplification of VEGF gene for +936C/T with sense: antisense (1:3) primer concentration still has the hook effect.

In general, it is not the problem of quantification where the crossing points (the cycle number at which the reaction enters exponential phase) are of interest but the SNP genotyping by melting curve analysis may be more problematic and we experienced the same. Among the standardization components, the relative amounts of primers are important and a few studies reported the advantages of asymmetric real time PCR (AS-RT-PCR) [15,19, and 20]. We resolved this problem by using asymmetric primer concentration in which we applied the different concentrations of sense vs antisense primers and the sense: antisense ratio (3:1) resulted in more of the strands complementary to the probe being amplified and more signal was obtained without ‘hook effect’ (Fig.1c). Thus, this intense optimization of asymmetric real-time PCR reactions resulted in the easy genotyping for the detection of VEGF SNP +936C>T and led to very good amplification efficiencies and a significant Tm difference between the peaks of normal and mutant alleles (Fig. 2). 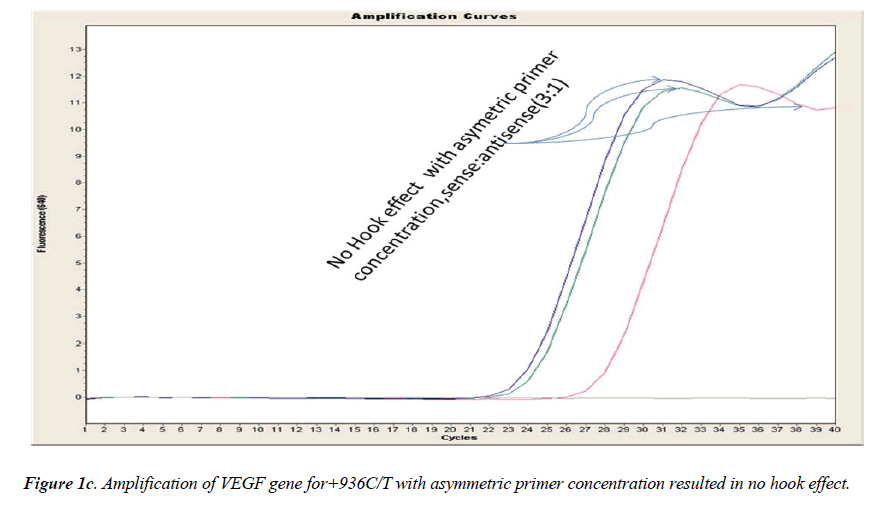 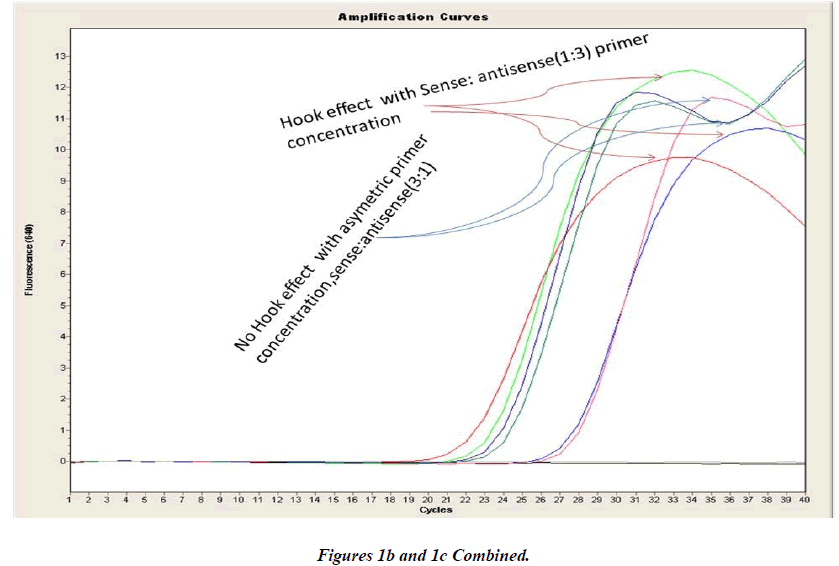 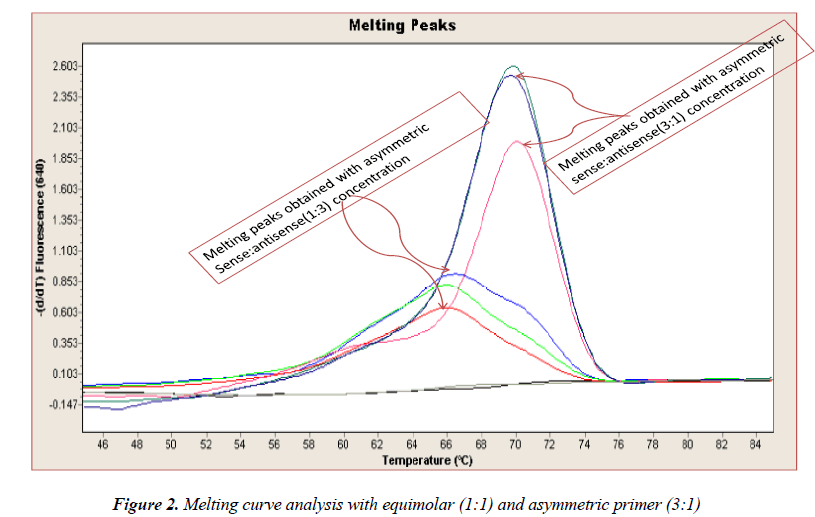 Finally, the developed protocol is technically very simple and sound to perform and also there is less chance of contamination as there is no need of post-Amplification electrophoresis. Asymmetric real-time PCR followed by melting curve analysis is a rapid method (total time ~1 hour) for the detection of +936C>T mutation in VEGF. It is also a high throughput method since in the 32-position LightCycler carousel thirty samples plus a blank and a control heterozygote can be readily analyzed within an hour after DNA extraction and allocation of DNA to capillaries

In summary, an asymmetric real-time PCR with melting curve analysis could be applied for the screening of +936C>T mutation in VEGF. In the last but not the least, we would like to recommend the use of asymmetric primer concentration to prevent ‘hook effect’ and poor genotyping that results when conventional LightCycler genotyping is used.

Acknowledgment and source of funding

This work was supported by the research fund of the Biomedical Research Institute of Chonbuk National University Hospital.