Astragaloside IV (3-O-beta-D-xylopyranosyl-6-O-beta-Dglucopyranosyl- cycloastragenol, AS-IV) is a major active ingredient of the traditional Chinese herb Astragalus membranaceus [1], which has been widely prescribed in traditional Chinese medicine (TCM) for the treatment of cardiovascular disorders [2,3]. Recent studies have shown that Astragaloside IV may play a potential role in protecting the heart from myocardial ischemia. The mechanism of action may involve antioxidative and nitric oxide-inducing properties, reduction of (Ca2+) i and sarcoplasmic reticulum (SR) Ca2+ load, enhanced free radical removal, and decreased lipid peroxidation [4]. Here, we showed that Astragaloside IV could attenuate myocardial ischemia reperfusion injury via PKCβ/ Egr-1 Pathway.

Protein Kinase C (PKC) is a family of serine- and threonine-specific protein kinases that can be activated by calcium and second messenger diacylglycerol. PKC family members phosphorylate a wide variety of protein targets and are known to be involved in diverse cellular signaling pathways and in many different cellular functions [5-7]. Yan et al. reported that activated Protein Kinase C (PKC), especially the β isoform, is a critical upstream regulator of Early Growth Response-1 (Egr-1) in the response to acute vascular stresses, such as hypoxia/hypoxemia and ischemia/reperfusion (I/R) [8-10].

Egr-1 is a nuclear protein and functions as a transcriptional regulator, its target genes are required for differentiation and mitogenesis. Recent researches suggest that ischemia/reperfusion- or hypoxia/reoxygenation-induced myocardial injury might be partly mediated by Egr-1 [11-13].

Sprague-Dawley rat at 6 weeks of age were purchased from the Model Animal Research Center of Zhejiang University and housed in the laboratory animal center of Zhejiang University at 22°C with a 12 h light/dark cycle. All animals used in the study were housed and cared for in accordance with the Chinese Pharmacological Society Guidelines for Animal Use. The work was approved by the Committee on the Ethics of Animal Experiments of the Zhejiang University. All surgery was performed under sodium pentobarbital anesthesia, and all efforts were made to minimize suffering.

Neonatal cardiomyocytes from the ventricles of 1-3-day-old Sprague-Dawley rat hearts were dissociated by an adaptation of the method of Simpson and Savion. Briefly [14,15], the ventricles were digested with 0.125% Trypsin at 37°C. Dissociated cells were preplated for 2 h in whole DMEM medium to selectively remove nonmuscle cells. Myocytes were then plated in 6-well dishes (1 × 106 cells/well) in a 5% CO2 incubator and maintained in DMEM solution containing 20% fetal bovine serum/0.1 mM Brdu for an additional 72 h. Cell were cultured in 1% Oxygen for 2 h and then moved to regular incubator to modify Hypoxia/reoxygenation condition.

Total RNA was extracted with Trizol according to the manufacturer’s instructions and was transcribed using Prime ScriptTM RT reagent Kit (TaKaRa, Dalian, China). The cDNA template was amplified by real-time PCR using SYBR-PremixExTaqTM Kit (TaKaRa, Dalian, China). The primer sequences were as follows: 5’- AGGACTTGATlTrGCATGGTATTGCA -3’ (forward), 5’- ATGCAGGGCAGGGTTCTGAG -3’ (reverse) for Egr-1, 5’- GCACCGTCAAGGCTGAGAAC-3’ (forward), 5’- GCCTTCTCCATGGTGGTGAA-3’ (reverse) for GAPDH. Thermal cycling was programmed as follows: 95 for 30 sec followed by 40 cycles of 95°C for 5 s, 60°C for 20 s and 72°C for 15 s, and then 72°C for 10 min. Gene expression was assessed by delta Ct method and mRNA levels of Egr-1 were normalized to those of GAPDH internal standard. 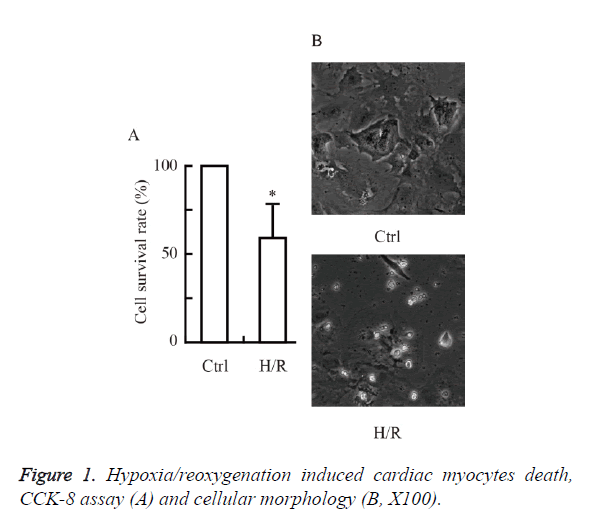 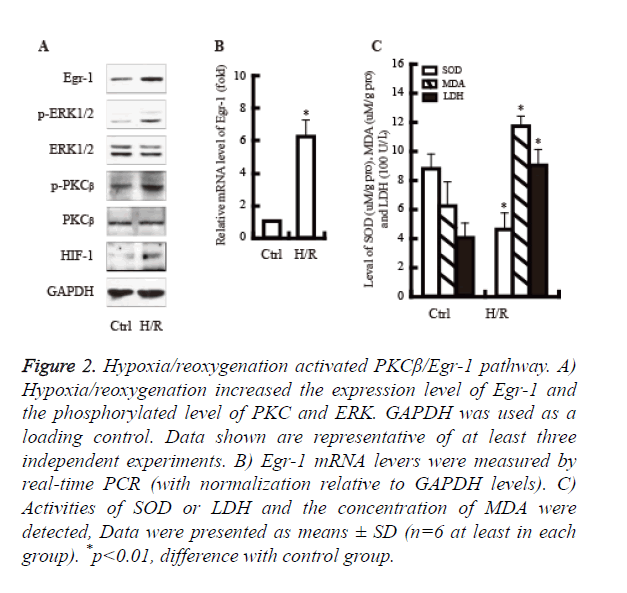 Figure 2. Hypoxia/reoxygenation activated PKCβ/Egr-1 pathway. A) Hypoxia/reoxygenation increased the expression level of Egr-1 and the phosphorylated level of PKC and ERK. GAPDH was used as a loading control. Data shown are representative of at least three independent experiments. B) Egr-1 mRNA levers were measured by real-time PCR (with normalization relative to GAPDH levels). C) Activities of SOD or LDH and the concentration of MDA were detected, Data were presented as means ± SD (n=6 at least in each group). *p<0.01, difference with control group.

As shown in Figure 3A, the cells with Astragaloside IV preconditioning increase cell survival rate compared with hypoxia/reoxygenation alone (~80% vs. ~60%, P<0.05). 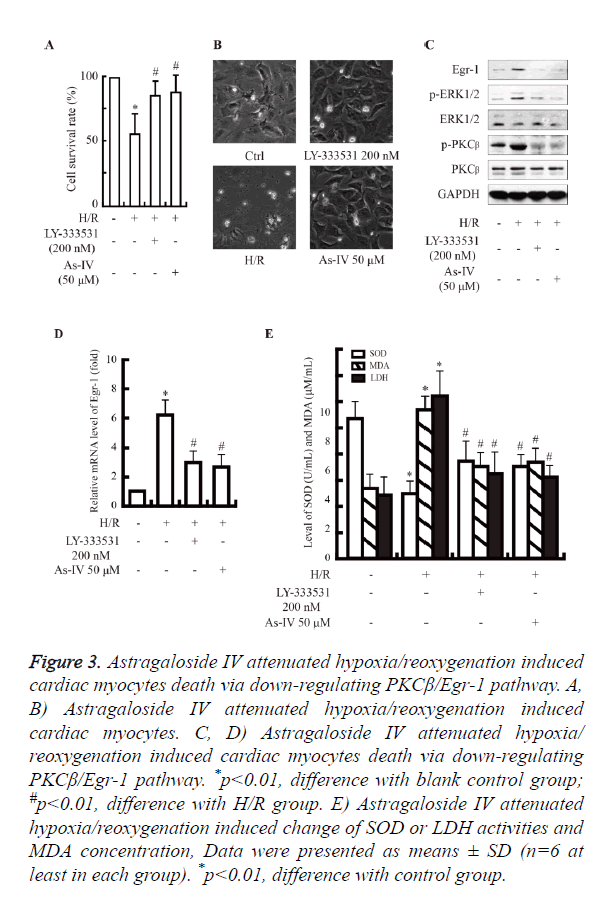 Hypoxia/reoxygenation injury activated the PKCβ/Egr-1 pathway (Figures 2A and 2B). While, the expression of PKCβ, Egr-1 and ERK was decreased at mRNA and protein levels in Astragaloside IV group, compared with H/R group. Subsequently, the up-regulation of LDH and MDA induced by hypoxia/reoxygenation was decreased significantly in Astragaloside IV preconditioning group (Figures 3B-3E).

In conclusion, our data provide more insights into Astragaloside IV’s role in caridioprotection. This will help us to understand the mechanism of Astragaloside IV as a protective agent against ischemia and reperfusion injury.

Disclosure of Potential Conflicts of Interest