Type-2 diabetes has becoming a major burden to family and society as economy develops. It has been well-documented that neuropathy occurs in early stage of type-2 diabetes [1]. Although there’s controversial whether mechanical hyperalgesia in diabetic patients is inflammatory or not [2], increasing evidences suggest that immune system and proinflammatory factors play an important role in mechanical hyperalgesia [3]. A number of studies have proved that progression of type-2 diabetes is companied and regulated by chronic inflammatory response [4]. TNF-alpha is a critical inflammatory factor whose imbalance between adiponectin is responsible for deficient in insulin-resistance and lipid metabolism [5]. Meanwhile, micro vascular pathology induced by lipid-metabolism dysfunction is considered to be a cause of hyperalgesia in diabetes [6], but the relationship between TNFalpha and type-2 diabetes hyperalgesia is not clear.

Rats were fed with normal or high-fat diet (with 60% normal diet, 10% lard, 20% sucrose, 2% cholesterol and 8% yolk powder). After Four weeks, single dose of streptozotocin (STZ, 30 mg/kg) was administrated via intraperitoneal injection. STZ (Yuanye Bio, China) was dissolved in 0.1 mmol/L Citrate buffer (PH=4.2) and protected from light. Intraperinantal injection was made within 30 minutes after solution preparation. Rats were restricted from food and water for 8 hours before injection and allowed for free food- and wateraccess 3 hours after injection.

Serum glucose was monitored before, 48 hours after, and weekly 5th ~ 12th weeks after STZ injection. Animals were grouped into diabetes group if serum glucose level exceeds 16.7 mmol/l at the 8th week (D). From 4th to 14th week, 50% paw withdrawal threshold (PWT; δ=0.184) was monitored weekly. In 10th week, if PWT is lower than 10, the diabetic rats were grouped in diabetic hyperalgesia group (HFDH). Furthermore, HFDH rats were treated with TNF-alpha receptor inhibitor (HFDHTNFI). If PWT is equal to or higher than 26, the rats were grouped into diabetic no hyperalgesia group (HFDNH).

Serum glucose: Blood was collected through tail vein from the 4th to the 12th week after STZ injection. Glucose level (mmol/l) was monitored with Blood glucose meter (Glucoleader, Taiwan).

TNF-alpha: Concentration (pg/ml) of serum TNF-alpha at the 12th week was detected with an ELISA kit from Yuanye Bio (Shanghai).

PWT was tested from 10:00-18:00 (Beijing time). Rats were placed in a transparent plastic box placed in a metal rack and allowed to accommodate for 30 minutes. Tests were started after animal stopping any carding activity. Fibre approached to the middle point of rat thenar perpendicularly and was kept for slight bending for 6-8 seconds. Positive reaction was accepted if rat exhibited rapid paw withdrawing or foot licking behaviour. The second stimulus was delivered 60 seconds later [8]. 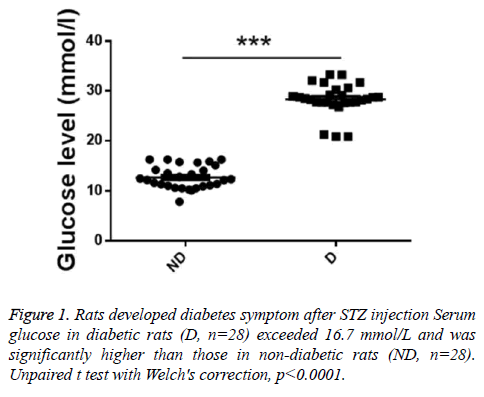 Serum level of TNF-alpha in rats with hyperalgesia

Based on whether exhibited hyperalgesia, diabetic rats were divided into two groups including diabetic no hyperalgesia group (HFDNH) and diabetic hyperalgesia group (HFDH). As showed in Figure 3, left two columns, rats in HFDH group are more sensitive to fibre stimulation than those in HFDNH group. TNF-alpha is one of central cytokines, which were involved in hyperalgesia pathogenesis [7-14], so we tested the serum level of TNF-alpha in those two types of rats. We found that, serum TNF-alpha was significantly lower in HFDH group (n=9) than those in HFDNH rats (n=10, left and mid columns in Figure 2), which indicated that down-regulation of serum TNF-alpha may be responsible for hyperalgesia generation in diabetic rats. 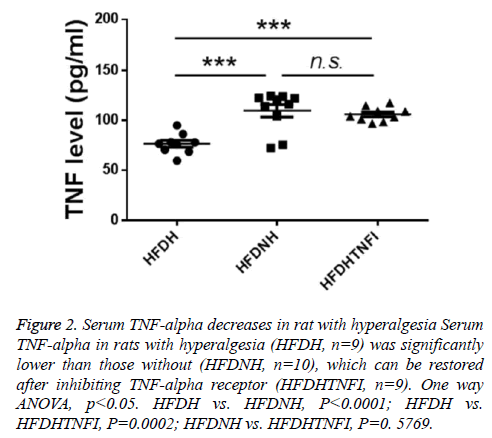 The effect of TNF-alpha inhibitor on hyperalgesia in HFDH rats 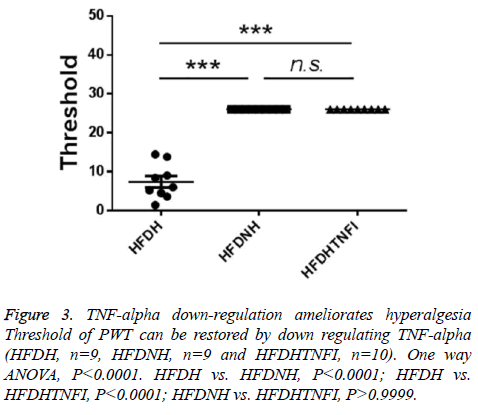 In the current study, we succeeded in establishing type-2- diabetic mechanical hyperalgesia rat model by combining a high-fat diet and STZ administration. Diabetic rats showed higher serum glucose (higher than 16. 7 mmol/L). Meanwhile, diabetic hyperalgesia rats exhibited mechanical allodynia (threshold lower than 10). All of these phenotypes are consistent with the features of neuropathy and hyperalgesia in human type-2 diabetes [9].

In neuron-injury model, activations of microglia and astrocytes are important mechanisms underlying initiation and maintenance of mechanical hyperalgesia. Activation of microglia induces hypertrophy and proliferation of glial cells [10]. The proliferated microglia and astrocytes can secreted large amount of chemotactic factors, such as MCP-1, TNFalpha and so on which can penetrate through abnormal brainblood barrier [11] and bind to corresponding receptors on surface of glial cells and activate P38MAK signalling. Then secretions of those chemotactic factors can be further increased by transcriptional activation via NF-KB or ATF2, leading to sensitization of injured neurons in the dorsal horn via both preand post-synaptic mechanisms, thus initiate and maintain mechanical hyperalgesia [12]. It is well known that TNF-alpha is one of the cytokines involved in neuropathic hyperalgesia [13]. However, the role of TNF-alpha in diabetic mechanical hyperalgesia is still unknown. Our result showed that serum TNF-alpha is significantly lower in HFDH rats than those in HFDNH group (P<0.001). Previous study has shown that type-2-diabetic mechanical hyperalgesia can be ameliorated in TNF-alpha-knockout mice [14]. Accordingly, we observed that the treatment of TNF-alpha inhibitor not only restore the down-regulated serum level of TNF-alpha, but also and more importantly, ameliorated hyperalgesia in diabetic rats. Taken together, all of these results suggested TNF-alpha may involve in progression of type-2 diabetic neuropathic hyperalgesia. To a more general sense that patients do not exhibit the severe symptoms after diagnosed as diabetic, prediabetes for example, deregulated serum TNF-alpha may lead to enhanced activation of central TNF-alpha receptor, thus involved in hyperalgesia in prediabetic patients [15].

This study was supported by Research award fund of the First Affiliated Hospital of Xinjiang Medical University (no: 2012YFY17, 2012).