Placental examination reflects prenatal factors and postnatal fetal outcomes. In the present study 100 full term placentas were studied morphologically in which 50 placentae were collected from normal mothers and 50 were from mothers with sickle cell disease. Placentas were examined for shape, weight and volume of placenta with surface area number of cotyledons, attachment of umbilical cord. No change was observed in cotyledon count in placentas of sickling cases. The most common shape of the placenta was discoidal in both normal cases (68%) and in mothers with sickle cell disease (50%). The second most common shape of the placenta was oval and it was found significantly higher in mothers with sickle cell disease (32%) than in normal cases (22%). Irregular shape was found in only 6% of normal placenta while it was 16% in cases of sickling cases which was significantly higher. Most commonly attachment of umbilical cord was central (32%) in normal cases and near centre in sickling cases (36%). The weight of placenta was significantly lower in cases of sickling (mean 438.08gm) in comparison to normal subjects (mean 468.88gm). The mean volume of placenta was also significantly lower in case of sickling cases (mean 502.06 ml) in comparison to normal subjects (mean 576.44ml). The placental surface area was also affected by sickle cell anaemia and it was found lower (mean 262.14cm2) than normal subjects (mean 273.12cm2). Thus, the present study indicated that sickling adversely affected gross placental parameters. This might be the probable reason behind worst foetal outcome in mothers with sickle cell disease.

The placenta is the most accurate record of infant’s prenatal experience [1]. It is a fetomaternal organ with important metabolic, endocrine (production of hormones such as oestrogen, progesterone, and chorionic gonadotrophin)and immunologic functions besides being responsible for nutrition, respiration and excretion for the fetus. As per Crawford et al (1962), the human placenta provides a paradox, since it is one of the most readily available structure for examination and yet it is one of the least known [2]. Acting as a barrier, it has a role in protecting the fetus from noxious agents. Placental formation begins in the latter half of the second month of the pregnancy and is usually completed by the fourth month. It reaches its maximum growth at term. At term, the placenta is discoid with a diameter of 15 to 25 cm and is approximately 3cm thick and weighs about 450-550gm. Placental thickness increases with age of the fetus. Placenta is a highly vascular fetal organ which maintains the maternal fetal circulation via its connection by the umbilical cord. The outermost layer of the placenta, the chorion, comes into contact with the endometrium; it is composed of two layers of cells - inner cytotrophoblast and outer syncytiotrophoblast. The chorion and allantois fuse to form the chorioallantoic membrane. In primates the amnion and chorioallantois eventually fuse.

Hemoglobinopathies, especially sickle haemoglobin are the commonest genetic disorders in the tribal belt of Central and Southern India. Undivided Madhya Pradesh (Madhya Pradesh and Chhattisgarh) harbours the largest tribal population (15-30% prevalence) in India. It is about one fourth of the total tribal population of the country [3]. Patients positive for the sickle cell trait have an increased risk of fetal loss, compared with women with normal hemoglobin levels. The most striking finding was a threefold incidence in the stillbirth rate among patients with sickle cell trait [4]. Concurrent with pregnancy, sickle cell anemia is associated with increased complications, such as pain crises, fetal loss, maternal infection, preterm labor and intrauterine growth restriction [4]. In sickling markedly small placental size and that histopathological changes related to confined placental mosaicism (a discrepancy between the chromosomal makeup of the cells in the placenta and the cells in the baby) may be associated with inadequate placentation and hence with retroplacental ischaemia [5]. Rathod et al (2007) reported that placentae in sickle cell disorders showed pathological changes in the form of infarction, calcification, sickled red blood cells and hemorrhage in intervillous spaces, increased syncytial knots, fibrinoid necrosis, stromal fibrosis, hyalinised villi and compensatory proliferation of trophoblastic cells [6]. Remarkable changes are seen on gross features of placenta of patients with sickle cell disorders as it adversely affects both foetal and placental outcome. The present study comprises of morphometric analysis of normal and sickling placenta and their correlation.

In the present study 100 full term placenta cases were collected from patients attending department of Obstetrics and Gynaecology in Tertiary Care Hospital of Medical College, Raipur from Chhattisgarh region. Out of these, 50 were collected from normal mothers (having normal haemoglobin level) while 50 were collected from mothers who were diagnosed for sickle cell anaemia. In each case, placenta was washed with normal saline and studied morphologically for weight using weighing machine, diameter using Vernier calliper scale. Volume of placenta was measured by volume displacement method. Shape of the placenta was observed and classified as oval, rounded, discoid or irregular. The attachment of umbilical cord was noted and classified as central, marginal or others. Maternal surface was examined for the number of cotyledons. The morphometric parameters were analysed statistically with Annova test. 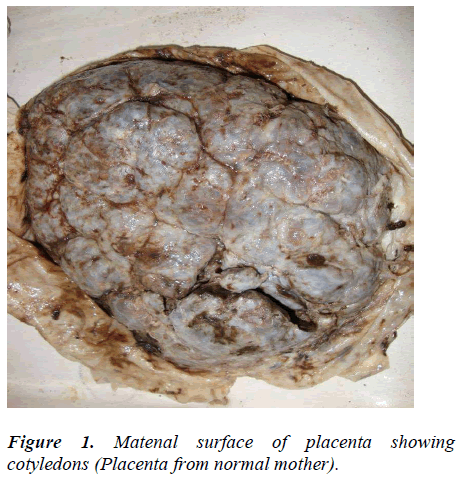 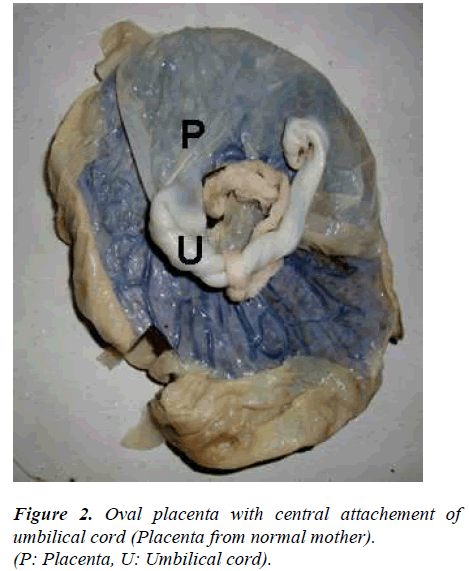 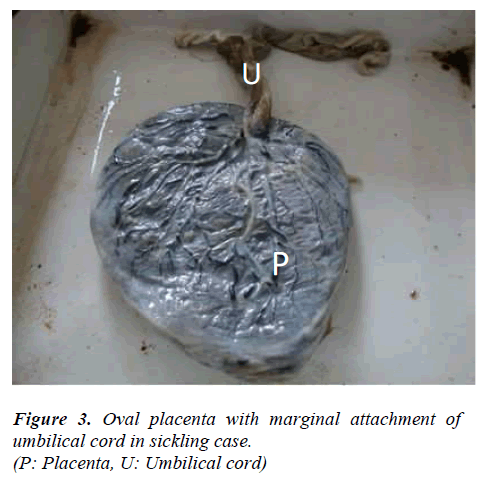 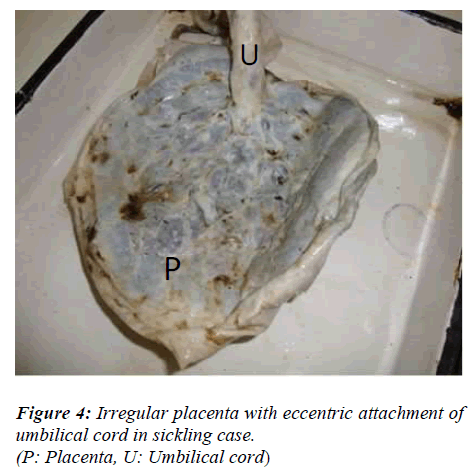 The present study showed that the placental outcomes were adversely affected by concurrent sickle cell disease. The mean weight of placenta was found to be significantly reduced in placenta of sickling cases (438.08 ± 45.22 gm). But many of the researchers have defined various normal placental weights. Hosemann (1946) in his study of normal term pregnancy found the placental weight of 400-1000 grams where as Wigglesworth (1962) found placental weight to be 360-570 grams [7-8]. The volume and surface area were also significantly lower in placenta of sickling cases (502.06 ± 148.71 ml volume and 262.14 ± 52.43cm2 surface area). These findings are in concurrence with the study of Fox (1967) and Udainia et al (2004) [9-10].

No change was observed in cotyledon count in placentas of sickling cases as compared to normal. Similar findings were also reported by Thomson et al (1969) and Sheikh Mohammad et al (2006) [11-12]. But, the cotyledon paucity was observed in the cases of PIH, prematurity and low-birth weight babies by Nordenvall et al (1988) and Gunapriya et al (1988) [13-14]. Attachment of umbilical cord was found most commonly as central in normal cases (32%) while as near centre in sickling cases (36%). Pretorius (1996) also reported central insertion of umbilical cord in normal placenta (34%) [15].

The probable reason behind the placental changes in sickle cell anaemic mothers might be sickle shape of red blood cells (RBCs). Sickle shaped RBCs blocks the circulatory system which prevents oxygen from getting to tissue beyond the blockage. Tissue deprived of oxygen begins dying, and the body's response is pain. This hypoxia might be an important factor in the pathophysiology of these outcomes. The sickling is promoted by conditions which are associated with low oxygen levels. Thus, sickling of RBCs induces hypoxia and hypoxia induces sckiling and it becomes a vicious cycle. These significant lower values may be due to the reduced perfusion to placenta because of the increased number of sickle shaped RBCs leading to reduced oxygen as well as blood supply [16]. Reduced maternal uteroplacental blood flow leading indirectly to constriction of foetal stem arteries has been associated with the changes seen in the placentae of sickling [17].

The most common shape of the placenta was discoidal in both normal cases (68%) and in mothers with sickle cell disease (50%). Pretorius (1996) also found discoidal shape as commonest in normal placenta (60%) [15]. In the present study, oval and irregular shaped placentas were found commonly in sickling mothers than in normal mothers. The probable reason behind this finding might be improper and non-uniform development of placenta in sickling cases due to circulatory disturbances.

Thus the, sickling adversely affects both foetal and placental outcome. If this disease is diagnosed at an early stage by sickling test, and clinical examination, added precaution can be instituted during antenatal period and labour to reduce the further risk to mother and foetus.