Renal transplantation (RT) is a treatment of choice for patients with end-stage kidney diseases [1-5]. Kidney transplantation corrects most of the metabolic disorders [4,5]. Post-transplant bone disease is a heterogeneous disease with various effects of age, gender, persistent hyperparathyroidism, corticosteroids and therapy with calcineurin inhibitors [4-10]. Leptin is released from fat tissues and circulating levels of leptin have been shown to be positively associated with fat mass in both lean and obese individuals [10,11]. Previous studies have shown elevated serum leptin levels in renal failure patients [12]. Leptin level is increased before transplantation, and decreased in the first year of RT [13]. Increase in serum leptin level may be seen thereafter and may be due to increase in fat mass, insulin resistance or steroid use in kidney transplant patients [14]. Leptin first emerged as a component of a regulatory fat mass and energy expenditure but recent evidence showed that leptin might be a potential mediator of the protective effects of fat mass on bone tissues [14,15]. Both a peripheral and a central action of leptin on bone have been proposed. Peripherally, leptin is found to exert positive effects on bone formation, whereas it is thought to reduce bone formation through a central control mechanism when binds to its specific receptors located on the hypothalamic nuclei [16-19]. However, the exact role of leptin on bone metabolism has not yet been clarified. It seems that leptin has the ability to affect directly the bone remodeling by modulating both osteoblast and osteoclast activities [17-19]. This study was desgined to evaluate the association between various indices of bone turn-over with serum leptin level in kidney transplant patients.

This cross-sectional study was conducted on a group of stable kidney transplant patients, referred to the clinic of nephrologyto continue their treatment. All patients signed the consent form for participation in this study. The etiologies of renal failure were diabetic nephropathy, hypertension, various glomerular diseases, autosomal dominant poly cystic kidney disease (ADPKD) or urinary tract infections [20-27]. Exclusion criteria included presence of acute rejection, any active or chronic infection, taking antibiotics during the past two months, and taking medications such as non steroidal anti-inflammatory drugs. After admission, all patients were examined for blood pressure (BP) and body mass index. Patients' histories concerning the length of the time that they were undergone kidney transplantation and their treatments were also obtained.Body mass index (BMI) was calculated using the standard formula (weight in kilograms/height in square meters) [28].

The results were expressed as the mean ± SD and median values. A statistical correlation was assessed using a partial correlation test. Comparison between groups were done using student’s t test. For normalization of the iPTH and leptin data, their second square were used. All statistical analyses were performed with the SPSS statistical package (version 11.500 for Windows; SPSS, Chicago, USA). Statistical significance was determined at a Pvalue < 0.05.

A total of 72 patients were enrolled in this study, including 47 men, 25 women, in whom, 11 patients had diabetes mellitus. The mean patients’ age was 44 (± 12) years. The mean length of the time that they had received a transplant kidney was 67.5 (± 42) months (median: 62 years). The patients data are shown in table 1. In this study there was a significant difference of serum leptin between females and males (r< 0.001; Figure 1). There was no significant difference of serum leptin between diabetic and non diabetic patients. In this study, there was a negative relationship between serum iPTH and creatinine clearance (r=- 0.44 P< 0.001). There was not any correlation between the duration of renal transplantation and serum iPTH (P>0.05).

Table 1: Data of the patients 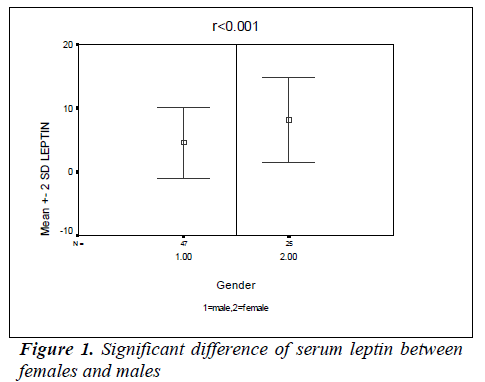 Figure 1: Significant difference of serum leptin between females and males 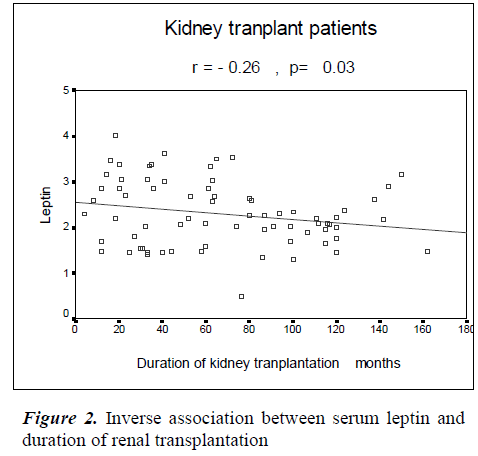 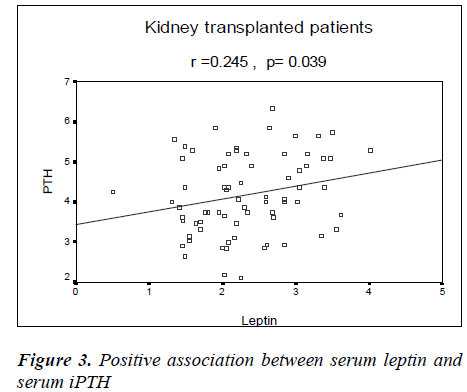 This study used the association between parathyroid hormone and serum leptin to define bone turn over in kidney transplant patients. Evenepoel et al. studied 1332 kidney allograft recipients, transplant between 1989 and 2000 [30]. They found that 4.1% of their patients had persistent hyperparathyroidism and needed parathyroidectomy after a first successful kidney transplantation. They concluded that persistent hyperparathyroidism requiring parathyroidectomy after successful kidney transplantation is a common clinical problem [30]. While in the present study our results are different, the patients’ mean iPTH being 18.4 (± 8.2) pg/mL (median: 16.5 pg/mL) means there was not any persistent hyperparathyroidism. Studies have shown that parallel changes in body weight and bone mass can be partially mediated via circulating leptin. Among the hormones involved in bone and mineral metabolism, such as oestrogens, testosterone and parathormone, leptin has recently become a subject of considerable interest [31-35]. It is thought that in kidney transplant recipients, serum leptin levels are often elevated and bone mineral density (BMD) decreased [31-35]. Souza et al. carried out a study on thirty-two RT patients and found no correlation between leptin and renal function in their study. They showed also that during the first post transplant year, serum leptin levels decreased significantly in relation to pre-transplant period [13]. Published data ex plaining leptin effects on bone metabolism remain conflicting, with positive and negative effects [14,15,31-35]. It has been shown that increased fat is accompanied by greater serum leptin concentrations, bone mineral mass and a lower risk of osteoporosis [36-42]. Malnutrition reduces serum leptin concentrations and bone mineralization in men [43-50]. It was also found that both serum leptin concentrations and bone mineral are increased at the initiation of puberty [45-54]. These findings show that leptin may modulate bone mineral. Steppan et al. showed in young ob/ob mice that treatment with leptin elevates bone size, bone mineral content, and density, indicating that leptin is needed for bone growth and modeling [55].

Previously we conducted a study on a group of hemodialysis patients. We found a significant positive correlation of serum leptin with iPTH. We concluded that in hemodialysis patients serum leptin may affect bone activity [56]. Agras et al. found that elevated leptin level is associated with increased bone mass at lumbar sites in renal transplant recipients. This finding showed that increased leptin might have a bone-sparing effect, especially in the lumbar region, in RT patients [57]. In a study on 27 kidney allograft recipients, Malyszko et al. studied markers of bone turnover and leptin [58]. They found that leptin was correlated with the percentage of body fat, serum creatinine, and urea. They concluded that leptin levels were associated with graft function and body fat in kidney allograft recipients and leptin was not related to nutritional status or bone metabolism in kidney allograft recipients, but it was associated with the current dosage of immunosuppressant and the serum calcium [58]. Recently, in a study on a group of healthy women, Maetani et al. observed strong positive association between leptin and PTH levels [59]. In the present study, we tried to consider the interrelationship between serum leptin and bone turn over or parathyroid activity in a group of kidney transplant patients. Further studies are needed to clarify significance of our findings.

This study was supported by a grant from Shahrekord University of Medical Sciences.

Ethical Issues.This study was approved by the ethical committee of Shahrekord University of Medical Sciences.

Conflict of Interest. The authors declare that they have no conflict of interest.

Authors' Contributions. HN and MRK defined the aims of research and the design of experiment and carried out the experiments. AB and SK participated in the design of the study and performed the statistical analysis. HS and MRT reviewed the paper. All authors read and approved the final manuscript.