Methods: A total of 108 PD patients and 108 healthy individuals were enrolled. The serum levels of Aβ1-42, Cys C and UA were measured. The Operating Characteristic Curve (ROC) was drawn, and then the Area Under the Curve (AUC), 95% Confidence Interval (CI), sensitivity and specificity were calculated.

Conclusion: Serum Aβ1-42 and UA may contribute to PD diagnosis. Cystatin C may be involved in the development of PD and be helpful in assessing the PD severity.

Parkinson’s disease (PD) is a degenerative disorder of the central nervous system with slow progression, which often occurs in the elderly and is incurable. Generally, when PD are diagnosed based on specific clinical symptoms, 50%~70% irreversible degeneration of the Substantia Nigra pars compacta (SNc) neuronal death have occurred already in the brain [1].

The causes of PD are not clear so far. Studies have shown that oxidative stress, mitochondrial dysfunction, immune inflammation, and neurotrophic factor reduction co-participate in the development and progression of PD [2-4]. The β- amyloid 1-42 (Aβ1-42) is a biomarker for PD, which induces the degeneration of the dopamine (DA) neurons and changes the morphology of DA neurons in a dose-dependent manner [5-7]. Moreover, Aβ deposition in the cerebral cortex causes the oxidative stress, the activation of glial cells, and the induction of inflammatory cascade [8]. Cystatin C (Cys C) has been investigated as a reliable indicator of renal function [9]. More recently, Cys C has been reported to be correlated to neurological diseases, such as the cerebrovascular disease and the Alzheimer’s disease [10,11]. Cys C is involved in the inflammatory response through regulating the cysteine protease activity, while the nerve inflammation plays an important role in the development of PD [12-14]. Therefore, Cys C may be associated with PD occurrence. The blood Uric Acid (UA) is an antioxidant and free radical scavenging factor [15]. Cells under oxidative stress are more susceptible to the injuries caused by free radicals and metal ions [16]. Based on the literature review, we hypothesize that serum content of Aβ1-42, Cys C and UA may be closely related to the pathogenesis of PD. To test this hypothesis, the relationship of Aβ1-42, Cys C and UA with PD was investigated in this study.

A total of 108 PD patients who were admitted during May 2014 and Dec 2015 to the Department of Neurology of the First Affiliated Hospital of Xinjiang Medical University were enrolled. At the same time period, 108 healthy participants with matched sex, age, and ethnicity were also enrolled and served as the control group. PD was diagnosed according to the UK Parkinson’s Disease Society Brain Bank criteria. Besides, the exclusion criteria of PD patients were: (1) Patients with other dementia (such as Alzheimer’s disease and vascular dementia) or with other conditions (such as hypertension, diabetes, gout, thyroid disease, liver cirrhosis, glomerulonephritis, renal failure, heart failure, blood diseases, systemic infectious disease); (2) Patients received surgery or radiotherapy or chemotherapy in recent months; (3) Patients with a history of trauma; (4) Patients took antibiotics or potassium-sparing diuretics.

The inclusion criteria for healthy participants were: No PD or family PD history; good health without other diseases or recent discomfort and the physical examination results were normal. Healthy participants who received surgery, radiotherapy and chemotherapy in recent months, or had a history of trauma, or took antibiotics or potassium-sparing diuretics, or mental abnormalities were excluded.

The prior written and informed consents were obtained from every patient. The study was approved by the ethics review board of the First Affiliated Hospital of Xinjiang Medical University.

According to the clinical Hoehn-Yahr (HY) classification, also known as the Unified Parkinson’s Disease Assessment Rating Scale (UPDRS) Part V, PD patients were grouped into earlier PD (HY grade<3; n=64) and advanced PD (HY grade ≥ 3; n=44). Besides, all the participants were divided into different groups based on their different gender and PD (Table 1). There was no significant difference between different groups in age and gender composition (p>0.05).

Table 1. The basic information of PD patients and healthy participants.

Patients who were preliminary diagnosed as PD were required to fill a form to collect their demographic information, medical history and family history. PD patients in the “open period” (symptoms relieved) received UPDRS grading. UPDRS includes five parts: Part I reflects the mental, behavioural and emotional condition; Part II evaluates the daily activities; Part III assesses the movement of PD patients. Each item in the above three parts contains five levels, grading from 0 to 4 points. The higher score indicates the more severe PD symptoms. Part IV of UPDRS reveals the complications in order to evaluate the dyskinesia’s, clinical fluctuations, and other complications. For part IV, the total score is 23, and higher score indicates the symptom aggravation. Part V (H-Y grading) involves 8 grades, which is used to evaluate the PD progression. The higher score indicates the more serious degree of PD progression.

SPSS 17.0 statistical software was used for data analysis. Data of age, serum Aβ1-42, Cys C and UA level, and UPDRS score are shown as mean ± SD. Independent t-test was used to conduct comparisons between two groups. Comparisons among multiple groups were analyzed using one-way ANOVA. If the difference was statistically significant, LSD method was further performed to study the difference between two groups. In addition, data of gender and ethnicity are shown as a relative composition ratio (%). Chi-square test was used to analyze these data. Spearman rank correlation analysis was performed. ROC was plotted. The area under the curve (AUC), 95% CI, cut-off point, sensitivity and specificity were calculated. P<0.05 indicated a statistically significant difference.

The serum Aβ1-42, Cys C and UA levels in healthy and PD participants

The diagnostic value of serum Aβ1-42, Cys C and UA for PD 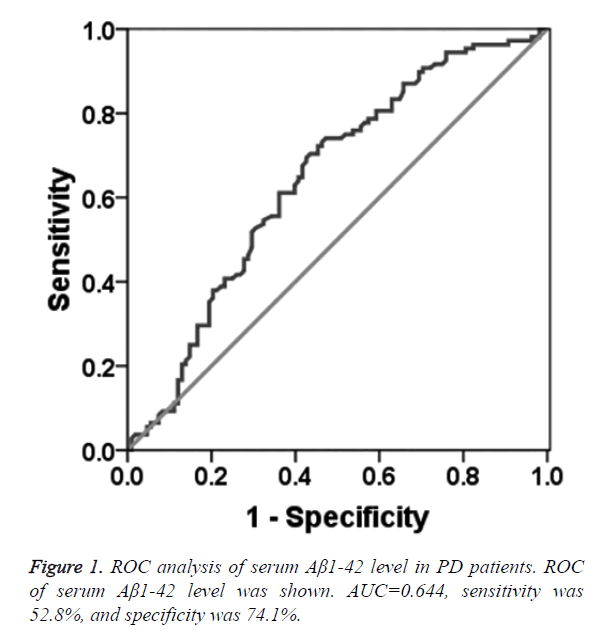 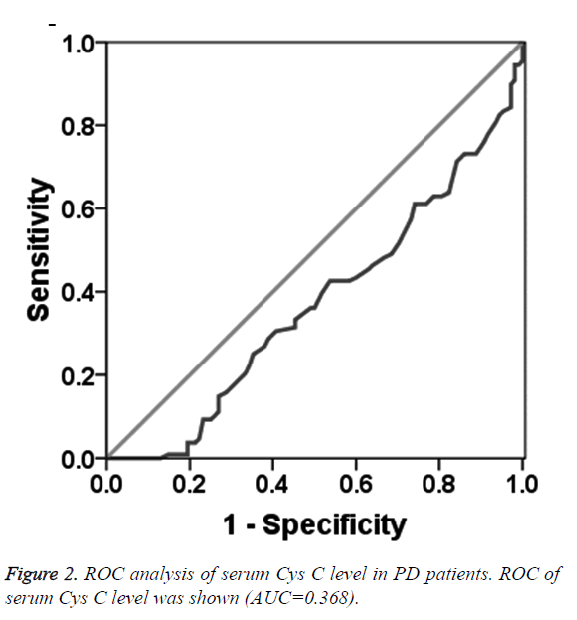 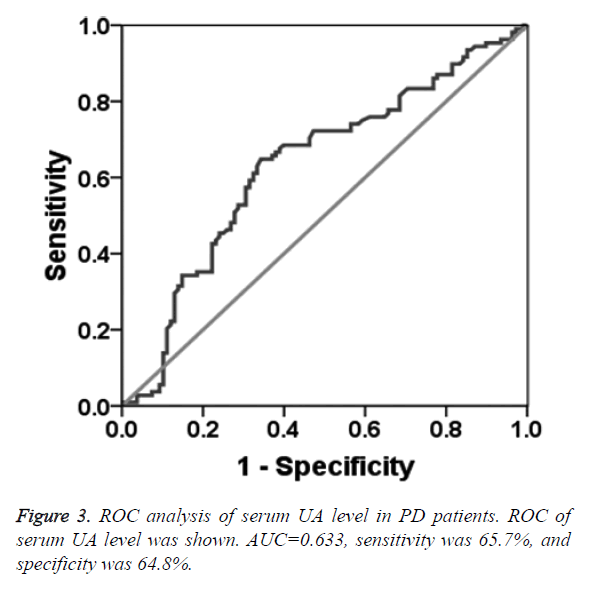 The serum content of Aβ1-42, Cys C and UA in male and female PD patients

Table 3. The serum content of Aβ1-42, Cys C and UA in male and female PD patients.

Table 4. The correlation analysis of serum Aβ1-42, Cys C and UA levels in PD patients and the UPDRS score.

The present research investigated the serum Aβ1-42, Cys C and UA levels in PD patients, and further demonstrated the role of these indicators for PD diagnosis and progression. Amyloid Precursor Protein (APP) was prone to produce Aβ after digestion by β- and γ-secretase enzyme. Cheng et al. demonstrated that the excessive accumulation of α-Synuclein (α-Syn) contributed to the synaptic damage and dysfunction. Soluble Aβ was more likely to induce synaptic damage and dysfunction than fibrillar Aβ [16]. The hyper-phosphorylation and aggregation of α-Syn were closely related to Aβ1-42 [16]. Clinton et al. also confirmed the interaction of Aβ with α-Syn, and this interaction could increase the synaptic damage, leading to PD aggravation [17]. In the present study, serum Aβ1-42 in PD patients was significantly lower than that in the healthy control group, suggesting the diagnostic value of serum Aβ1-42 for PD diagnosis. Besides, Siderowf showed that the Aβ1-42 levels in the Cerebrospinal Fluid (CSF) of PD patients reduced by 15%~20% with comparison to the healthy controls [18]. Aasly et al. demonstrated that the reduction of Aβ1-42 in PD patients was related to the dysfunction of striatal dopamine [19].

Previous studies mainly reported the level of Aβ1-42 in CSF. Maetzler et al. reported that the CSF Aβ1-42 levels in advanced PD patients were much lower than that in the healthy controls [20]. Consistently, our study showed that the serum Aβ1-42 levels in PD patients were much lower than that in healthy participants. Abnormal aggregation of Aβ and α-Syn occurs in the cortex and hippocampus as PD progresses. The Aβ oligomerization often result in blood-brain barrier damage and enhances the inward transport, which leads to the reduction of soluble Aβ in CSF [21]. This may be one of the reasons that Aβ1-42 level was reduced in patient serum. In addition, there was no correlation between serum Aβ1-42 levels and UPDRS scores in this study. Presumably, this may be because that brain lesions of PD patients occur in different brain regions. While, Shi et al. reported the Aβ1-42 level in the CSF of PD patients was positively correlated with its severity [22]. It is inconsistent with our findings, which may be a result of the small sample size of advanced PD patients in our study. Therefore, further follow-up study will perform to confirm our conclusion. Animal experiments show that when brain Cys C level declines, and less microglia can be activated by impaired Dopaminergic (DA) neurons and inflammatory responses is inhibited, leading to cell damage [23]. Dutta et al. found that the release of Cys C from damaged DA neurons involved in the induction of activated microglia, which further aggravated the neuronal loss of DA neurons [24].

In addition, our study suggested that serum Cys C level was not sufficient to identify or diagnose PD. However, it was positively correlated with HY classification. Moreover, serum Cys C level in PD patients was significantly higher than that in healthy controls. Increased Cys C level was positively correlated with PD progression, suggesting that serum Cys C might contribute to the early screening for PD. Previous studies in rats demonstrated that injection of 6-Hydroxy-Dopamine (6- OHDA) as well as 1-Methyl-4-Phenyl-1, 2, 3, 6- Tetrahydropyridine (MPTP) into the nigrostriatal brain led to an effective dopaminergic neuronal degeneration [25,26]. Also, 6-OHDA could up-regulate the Cys C expression in the dopaminergic neurons. Meanwhile, our results showed gender had little effect on serum Cys C levels of PD patients

In summary, our study revealed that serum Aβ1-42 and UA levels were significantly lower while the serum Cys C level was significantly higher in PD patients than in the healthy controls. The serum Aβ1-42, Cys C and UA may be related to the pathogenesis of PD and be potential markers for PD diagnosis, particularly, serum Cys C level may be valuable for assessing PD severity.

This study was supported by High-tech Research and Development Project of Science and Technology Department of Xinjiang Uygur Autonomous Region (grant No. 201417101).

All authors have read the journal’s policy on disclosure of potential conflicts of interest and have none to declare.

All authors have read the journal’s authorship agreement that the manuscript has been reviewed and approved by all named authors.