The aim of this study was to explore the relationship between Folypolyglutamate synthetase (FPGS) gene polymorphism and the blood drug concentration as well as adverse reaction as of Methotrexate (MTX) in children with Acute Lymphocytic Leukaemia (ALL). Polymerase Chain Reaction-Restriction Fragment Length Polymorphism (PCR-RFLP) combined with DNA direct sequencing method was used to analyse the genotype of FPGS-rs1544105 in 51 children with ALL. The blood drug concentration of MTX in patients was determined by using high performance liquid chromatography (HPLC). In addition, the adverse reactions of MTX were also evaluated. The MTX concentration/dose (C/D) values and the incidence of adverse reactions in patients with different FPGS genotypes were compared. FPGSrs1544105 polymorphism showed three genotypes in Chinese ALL children. The minimum allele frequency of G was 35.3%. Although ALL children with GG genotype had the lowest MTX C/D ratio value, no statistical difference was found among the different genotypes (P>0.05). However, GG genotype indeed reduced the risk of neutropenia in ALL children (P=0.032), especially in male patients. FPGS-rs1544105 gene polymorphism may be associated with the adverse reactions of MTX treatment, thus genotype detection before MTX treatment may be helpful to the individualized medication of MTX for ALL patients.

Acute Lymphocytic Leukaemia (ALL) is the most common tumour disease in children [1]. High dose methotrexate (HDMTX) plays an important role in the treatment of extra medullary leukaemia [2,3]. Folylpolyglutamate synthetase (FPGS) is an important catalytic enzyme in the metabolic process of MTX [4]. Loss of FPGS activity leads to a reduced production of intercellular MTX polyglutamate (MTXPG) and then causes drug resistance against MTX [5,6]. In recent years, there were more and more researches concerning human FPGS gene polymorphism, mainly on rheumatoid arthritis, solid tumour and so on [7-9], but seldom on leukaemia [10]. In this study, we analysed the relationship between the genotypes of FPGS-rs1544105 in Wenzhou ALL children with Han nationality and the curative effect of MTX and its adverse reactions, so as to provide a basis for clinical individualized medication of MTX.

Fifty-one children with ALL initially diagnosed and treated in the Department of Haematology of the Second Affiliated Hospital and Yuying Children’s Hospital of Wenzhou Medical University Hospital from July 2012 to August 2014, were enrolled in this study. The ALL children included 28 boys and 23 girls, aged 5.9 ± 4.3 years. All cases had been confirmed by clinical, morphological, immunological examination and immunohistochemical staining as well as chromosome karyotype analysis. MTX chemotherapy for the patients referred to the ALL 2008 Plan from Chinese Children’s Leukaemia Group (CCLG). The patients were divided into three risk ranks (low-risk (n=25), moderate-risk (n=16) and high-risk (n=10) according to their conditions such as age, peripheral blood leukocyte count (WBC), immune classification, fusion gene, karyotype analysis, prednisone reaction, bone marrow remission at day 15 and day 33, Micro- Residual Disease (MRD) at day 33 and week 12, central nervous system state and so on, and received different dose of MTX treatments, 3 g/m2 MTX for low-risk group and 5 g/m2 for high-risk group.

Exclusion criteria: Patients died during the process of chemotherapy or discharged automatically. Signed informed consent was obtained from each patient’s parents. This study also got the approval from the ethics committee of Yuying Children's Hospital and the Second Affiliated Hospital of Wenzhou Medical University.

DNA was extracted from 3 ml EDTA-anticoagulant peripheral blood using Wizard DNA extraction kit (Promega, USA) following the manufacturer’s instruction. Specific gene primers mentioned in the literature [11] were used in this study. The primer sequences were: forward 5’- CCCAGAGTCCTTATTCTTAGCC-3’ and reverse 5’- GTGCCTCCTTCACACACAG-3’. PCR reactions were carried out in a Gene-Amp PCR System 2400 (Applied Bio systems) for 1 cycle of 10 minutes at 95ºC and 40 cycles with 15 s at 95ºC, 60 s at 60ºC and 60 s at 72ºC, followed by an additional extension at 72ºC for 7 min. For RFLP analysis, 20 μl of the PCR product was digested with HpyCH4IV restriction enzyme (New England Biolabs, Inc., USA) at 37ºC for 4 h. The RFLP samples were then mixed with loading buffer and separated by 2.5% agarose gel electrophoresis (100 mV, 40 min). After stained with ethidium bromide, gel was analysed in a gel image analyser.

In order to verify the RFLP results, 5 cases of PCR products underwent direct DNA sequencing and compared with the human genome database on NCBI. The variant types and genotypes were determined, among which mutant G-A was a variant.

At 24 and 44 h after MTX administration, 2 mL peripheral venous blood was collected for the determination of MTX concentration by using HPLC [12]. ZORBAX XDB-C18 (4.6 × 250 mm, 5 μm, Agilent, USA) and XDB-C18 guard column (4.6 × 12.5 mm, 5 microns) were used as immobile phase and the condition of mobile phase was set to: acetonitrile/ H2O=30/70 (V/V), the flow rate: 1 ml/min, column temperature: 30ºC and detection wavelength: 225 nm. Methotrexate standard solution was prepared with 10 mg methotrexate standard (Pfizer pharmaceutical co., LTD., batch number HY21A), which was diluted in 100 mL methanol at a final concentration of 0.1 mg/mL. Internal standard solution was prepared with 50 mg levofloxacin (100 mg/bottle,National Institute for the Control of Pharmaceutical and Biological Products, batch number 130537-200301), which was dissolved in 25 mL methanol at a concentration of 2.0 mg/mL. After that, 5 μl of 100 μg/mL levofloxacin internal standard working solution was added in 0.2 mL plasma and mixed, followed by the addition of 20 μl of 70% perchloric acid solution. After vortex mixing for 2 min and centrifugation at 13000 rpm for 10 min, the supernatant was used for the detection on HPLC.

Evaluation of the toxicity and adverse events of MTX chemotherapy

The toxicity and adverse events of MTX chemotherapy on the patients were evaluated within 14 d after HD-MTX infusion. The side effects mainly included hematotoxicity (anaemia, thrombocytopenia and neutropenia) and non-hematotoxicity (oral mucosa damage, liver and kidney toxicity and gastrointestinal tract toxicity).

Side effects were classified according to the Common Terminology Criteria for Adverse Events v3.0 made by National Cancer Institute (NCICTCAE, version 3.0).

The size of PCR product of FPGS rs1544105 loci was 298 bp. After enzymatically digested by HpyCH4IV, samples exhibited three genotypes: (1) homozygous GG genotype, digested into 168 bp and 130 bp bands; (2) heterozygous genotype GA, digested into three bands: 298 bp, 168 bp and 130 bp; and (3) homozygous AA genotype, which cannot be digested by HpyCH4IV and has only 298 bp band as shown in Figure 1. 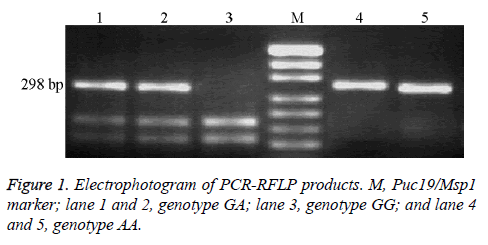 The DNA sequencing results of the PCR products confirmed the results of RFLP as shown in Figure 2.

Genotyping of the patients

Minimum allele frequency of G was 35.3%. As tested by Chisquare test, genotype frequency was in accordance with Hardy- Weinberg equilibrium (P=0.312).

Relationship between genotypes and serum concentration of MTX

The blood MTX concentration and concentration/dose (C/D) ratio value were the lowest in ALL patients with genotype GG, but showing no statistically significant difference from those in the other two genotypes (P >0.05) as shown in Table 1.

Table 1. MTX concentration and C/D values in ALL patients with different FPGS genotypes.

Relationship between genotypes and adverse events of MTX

Adverse events were common in the ALL children treated with HD-MTX, especially the different degrees of bone marrow suppression and liver function damage as shown in Table 2. No relationship was found between FPGS rs1544105 gene polymorphisms and the side effects of MTX (P>0.05), except for neutropenia.

Table 2. MTX-induced toxicity in ALL patients.

If the patients were further divided into two subgroups basing on the neutropenia grades (<grade 2 and ≥ grade 2), the incidence of neutropenia showed significantly different among the patients with GG, especially in male patients as shown in Tables 3 and 4.

Table 4. Relationship between FPGS genotypes and neutropenia in different gender.

MTX, one of the main drugs applied in the treatment of ALL, exerts its pharmacological effects by competitively inhibiting folic acid metabolism and thereby inhibiting RNA and DNA synthesis [13]. Clinical observations have found that the same dose of MTX has different curative effect and adverse reaction in different individuals. The fact that different individuals have different sensitivity and tolerance to MTX treatment suggests that folic acid metabolism may affect the response of the body to MTX treatment [14,15]. FPGS is a key enzyme for MTX metabolism, whose activity and expression influence the intercellular MTXPG concentration, and thereby affecting the response of cells against MTX [16]. Therefore, gene polymorphism in FPGS may have correlation with MTX drug reaction as well as the prognosis of patients, but it has been seldom reported. In this study, we found that a total of 3 genotypes exist in FPGS rs1544105 loci: GG, GA and AA.

Minimum Allele Frequency (MAFs) in Wenzhou Han ALL children was 35.2%, consistent with the results of Wang et al. [17], but significantly lower than that in Utah residents (64.2%) in Western and Northern Europe and that in the Yorba peoples in Nigeria (44.7%), in accordance with the characteristics that FPGS gene polymorphism was ethnically and regionally different [18].

Currently, the relationship between FPGS rs1544105 gene polymorphism and MTX blood drug concentration is not clear. Liu et al. [19] and Panetta et al. [20] found that high FPGS activity in the patients with genotype GG can prolong the retention time of MTX in blood and elevate the blood concentration of MTX, which can increase the susceptibility to MTX. However, Sharma et al. [21] and Wang et al. [17] found genotype GG can reduce the curative effect of MTX.

In this study, we found MTX concentration and C/D ratio were low in the ALL patients with genotype GG, but it was not statistically different from the other two genotypes (P=0.139). The reasons may be summarized as follows: First, MTX metabolism in vivo is regulated by multiple genes. For instance, Methylene Tetrahydrofolate Reductase (MTHFR) [22] and Gamma Glutamyltransferase (GGH) [23] are involved in the regulation of MTX metabolism and interact with FPGS, but their weight in the metabolic process of MTX is unclear [24]. Second, FPGS activity is associated with mRNA expression in cell proliferation, but influenced by the transcriptional and post-translational modification [25]. Third, there were only 8 cases of genotype GG in this study, which may cause bias to the results.

On the basis of genotype, larger sample size is needed for predicting the relationship between gene polymorphism and MTX blood drug concentration. MTX is mainly metabolized and decomposed in liver and bone marrow. Therefore, MTX treatment is likely to cause liver damage and bone marrow inhibition.

Our results showed that adverse events were common in the ALL children treated with HD-MTX, especially the different degrees of bone marrow suppression and liver function damage. Patients with peripheral blood neutrophil count less than 1.5 × 109 /L accounted for 56.9%.

Furthermore, the incidence of liver function damage was 50.9%. Except for granulocytopenia, no significant relationship was found between FPGS-rs544105 polymorphism and the side effects of MTX. Many factors can contribute to this result. First, infection and other serious complications may also affect the evaluation of HD-MTX toxicity. Second, some patients had liver damage before the chemotherapy. The use of hepatinica during chemotherapy had influence on the results.

Our results showed that ALL children with genotype GG had lower risk of granulocytopenia (P=0.032), especially in the boys (OR=0.075, 95% CI=0.006-0.954, P=0.047). However, this effect was not obvious in girls (P=0.510). The close relationship between sex hormone and its receptor and leukaemia may offer an indication that Constitutive Androstane Receptor (CAR) and Estrogen Receptor (ER) may be involved in the regulation of FPSG gene, but it needs further in-depth study.

In conclusion, FPGS-rs1544105 gene polymorphism may be associated with the adverse reactions of MTX treatment, thus genotype detection before MTX treatment may be helpful to the individualized medication of MTX for ALL patients. In the future it needs further study with larger sample size and longer observation time.

This work was supported by grant from the subjects of Wenzhou City Science Plan (Y20140255).