Association of extracellular superoxide dismutase Ala40Thr, Arg213Gly, and Leu53Leu polymorphisms with risk of type 2 diabetes mellitus in a Chinese population

#The two authors contribute equally to this study.

Objective: We performed a study to investigate the association of EC-SOD Ala40Thr (rs2536512), Arg213Gly (rs8192291) and Leu53Leu (rs1799895) polymorphisms and haplotypes with the risk of T2DM, and their correlation with environmental factors.

Conclusion: The EC-SOD Arg213Gly (rs8192291) polymorphism is correlated with an increased risk of T2DM, especially in males, never drinkers, those with a family history of T2DM and overweight subjects. The G-C-C, G-C-G and G-T-C contribute to the pathogenesis of T2DM.

Type 2 diabetes mellitus (T2DM) is the most common type of endocrine disease in developed and development countries and the prevalence of this disease is increasing worldwide, and majority of patients with T2DM occur in China [1,2]. It is reported that the prevalence of T2DM was 2.5% in 1994, but increased to about 10% in 2010 [3,4]. Diabetes and related complications have brought about a major healthcare burden and give tremendous challenges to patients and healthcare systems [1,2]. The pathogenesis of T2DM is a long term process, and the detailed etiology underlying T2DM remains unclear. Many environmental and lifestyle factors play a part in the development of T2DM, such as impaired glucose tolerance, hypertension, high fat dietary, high cholesterol dietary, obesity or overweight, and long-term lack of physical activity practice [5]. However, not all individuals would develop T2DM even when they exposed to the same environmental and lifestyle risk factors, and only a part of individuals can be explained by such factors, and the exact molecular mechanism of developing T2DM is not fully understood.

Superoxide dismutase (SOD) is a critical defence system for antioxidant enzymes, and there are three types of SOD in human body, including a cytosolic form (CuZn SOD or SOD1), a mitochondrial form (Mn SOD or SOD2), and an extracellular form (EC-SOD or SOD3). EC-SOD is mainly observed in the pancreas, skeletal muscles, and blood vessels, and it is the principal cleaner for oxygen free radicals. The enzymatic activity of EC-SOD in uterine, placenta and blood vessels was stronger than that of CuZn SOD and Mn SOD. The EC-SOD is located on chromosome 4p16.3-q21 with a length of 5900bp and 720bp in coding region, including three exons and two introns. The heparin-binding domain of EC-SOD could bind the extracellular surface of endothelial cells and blood vessels, but the lysine residue of EC-SOD is easier to be glycosylation in the high glucose condition, and thus the binding affinity to heparin is reduced [6]. Experimental study showed that the low EC-SOD activity may lead to high alloxan susceptibility of beta-cells, and thus attribute to a high susceptibility to superoxide radicals produced by activated inflammatory leukocytes and in hyperglycaemia [7]. An in vivo study reported the EC-SOD is associated with the altered metabolic state in diabetic skin and increases the reactive oxygen species [8]. Three main genetic polymorphisms (Ala40Thr, Arg213Gly and Leu53Leu) were observed in ECSOD and were located on the 2 and 3 extrons. Mutation of Arg213Gly could increase 8-15 fold human plasma extracellular superoxide dismutase content, and reduce its enzyme activity [9,10]. Currently, only a few studies reported the association between EC-SOD polymorphisms and risk of T2DM, but the results are inconsistent [11,12]. Therefore, we performed a study to investigate the association of EC-SOD Ala40Thr (rs2536512), Arg213Gly (rs8192291) and Leu53Leu (rs1799895) polymorphisms and haplotypes with the risk of T2DM, and their correlation with environmental factors.

A total of 612 Chinese patients with T2DM were selected from the Department of Endocrinology of Zhengzhou Central Hospital between Jun 2013 and Jun 2015. All enrolled patients were diagnosed by laboratory evaluations according to the criteria specified by the World Health Organization- International Diabetes Federation (WHO-IDF) [13]. The diabetes mellitus was defined as the fasting plasma glucose level (FPG) ≥ 126mg/dl or ≥ 200 mg/dL 2 h after consuming a drink containing 75 g glucose. The exclusion criteria for patients were those with a history of auto-immunologic disease, cancers or end-stage liver or kidney diseases. The main characteristics of T2DM patients were as follows: mean age was 58.40 ± 9.55 y, and the mean T2DM duration was 11.43 ± 6.50 y.

The non-diabetic group comprised 630 healthy volunteers attending the physical examination center at Zhengzhou Central Hospital of Zhengzhou University. All control subjects were not having T2DM according to WHO-IDF criteria. All the controls were confirmed to be without endocrine diseases, severe active inflammatory diseases, receiving any treatments or drugs that could influence the glucose metabolism or weight. The mean age of controls was 59.10 ± 9.20 y.

The proposal of this study obtained the approval from the ethics committee of Zhengzhou Central Hospital.

When compared with controls in terms of demographic, lifestyle and clinical characteristics of investigated subjects,patients with T2DM were more likely to be male, have a habit of heavy smoking and drinking, have a family history of T2DM, and have higher level of systolic and diastolic blood pressure, BMI and HDL-c and a lower level of FPG, triglyceride and LDL-c (Table 1).

Table 2. Genotype distributions of EC-SOD between T2DM patients and controls.

Table 3. Association of environmental factors and EC-SOD polymorphisms with the risk of T2DM.

The haplotype analysis revealed no linkage disequilibrium among EC-SOD rs2536512, rs8192291 and rs1799895 (Figure 1). Five common haplotypes (frequency>0.03 in both patients with T2DM and controls) were observed, and the G-C-C and G-C-G haplotypes were associated with a reduced risk of T2DM, while the G-T-C haplotype was correlated with an increased risk (Table 6). 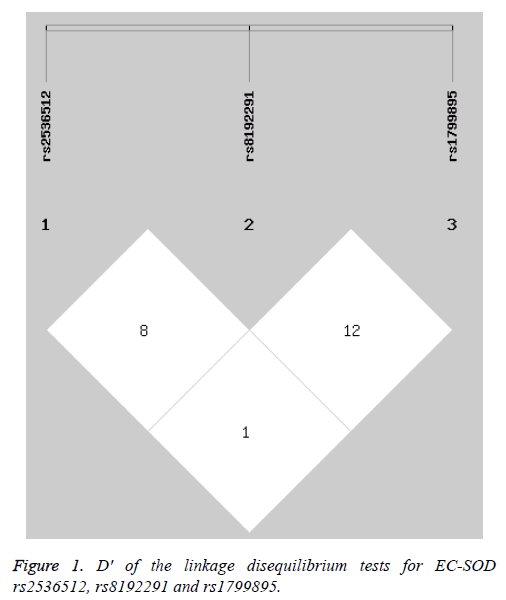 In the present study, we conducted a case-control study to investigate the association of EC-SOD Ala40Thr (rs2536512), Arg213Gly (rs8192291) and Leu53Leu (rs1799895) polymorphisms with the development of cerebral infarction. We observed that the CT and TT genotypes of EC-SOD Arg213Gly (rs8192291) were correlated with an increased risk of T2DM, and the G-C-C, G-C-G and G-T-C haplotypes were correlated with an elevated risk of this disease.

In normal condition, the affinity of EC-SOD towards heparin could combine the extracellular surface of endothelial cells and blood vessels, but amino acid residues were glycosylated and the affinity was reduced in the condition of high glucose concentration, and finally the enzyme activity was reduced. An experimental study indicated that the low EC-SOD activity may contribute to the high alloxan susceptibility of β cells, and may also cause a high susceptibility to superoxide radical produced by activated inflammatory leukocytes and in hyperglycaemia [7]. Previous study reported that the EC-SOD Arg213Gly genetic polymorphism could reduce the affinity of EC-SOD and be related to renal failure of T2DM patients, which showed that this genetic mutation was associated with risk of ischemic cardiovascular and cerebrovascular diseases [15,16]. Park et al. reported that the serum EC-SOD concentrations were a sensitive biochemical marker of insulin resistance in patients with T2DM and hypertension [17]. Tahkashi et al. firstly reported the association between ECSOD genetic polymorphisms and development of diabetes nephropathy [18]. The genetic mutation of EC-SOD Arg213Gly could elevate 8-15 folds levels of EC-SOD in serum, and decrease the affinity towards heparin and endothelial cells, while the EC-SOD Ala40Thr and Leu53Leu (rs1799895) genetic polymorphisms could not alter the capacity of affinity to heparin and enzymatic activity [18].

Several previous studies reported inconsistent results for the association between EC-SOD genetic polymorphism and risk of diabetes [10-12,19,20]. Ukkola et al. firstly reported the association between EC-SOD genetic polymorphisms and development of T2DM, and found that EC-SOD genetic polymorphism was not related to the macroangiopathy in T2DM patients [20]. Stroke et al. performed a study in Russian population, and reported an association of EC-SOD Arg213Gly genetic polymorphism with the pathogenesis of diabetic polyneuropathy [10]. Tamai et al. carried out a study in a Japanese population, and indicated that EC-SOD Ala40Thr polymorphism was related to the development of T2DM, while the EC-SOD Arg213Gly was not [12]. A recent study in a Chinese population revealed that the AA genotype of EC-SOD Ala40Thr showed a 2.19-fold higher risk of developing T2DM than the GG+GA genotype [11]. However, we found that the CT and TT genotypes of EC-SOD Arg213Gly showed a 1.46-1.92 folds risk of developing T2DM, and the discrepancies in these studies may be attributed to differences in populations, sample size, study design and random by chance.

Our study revealed that EC-SOD Arg213Gly polymorphism had interaction with family history of T2DM, which showed that there might be other genetic factors interacted with this gene to increase the risk of T2DM. Marklund et al. reported that the plasma levels of EC-SOD increased with age and could be modulated by lifestyle factors, such as obesity, and the ECSOD contributed to the cardiovascular disease risk [21]. Our results showed that EC-SOD Arg213Gly mutation had an interaction with BMI and age, which was in line with previous results. Moreover, we firstly reported a relationship between three haplotypes and risk of T2DM, which suggested that the haplotypes of EC-SOD could be molecular risk factors for this disease.

Two strengthens should be mentioned in this study. First, this study included 612 patients with T2DM and 630 healthy subjects, which is a relative large sample size study and could provide enough statistical power to find differences between studies. Second, we firstly reported the association of EC-SOD haplotypes with risk of T2DM, which could provide scientific information for further studies to investigate the association between them. Moreover, only one limitation should be considered. The lifestyles of included subjects were selfreported and recalled. Therefore, recalling bias and information bias are inevitable.

Our study suggests that the EC-SOD Arg213Gly (rs8192291) polymorphism is correlated with an increased risk of T2DM, especially in males, never drinkers, those with a family history of T2DM and overweight subjects. In addition, the G-C-C, GC- G and G-T-C haplotypes contribute to the pathogenesis of T2DM. Further studies with larger sample size, better design are greatly needed to confirm our findings.

We thank the great help from staffs in Zhengzhou Central Hospital, and they help us to collect the blood samples for our analysis. 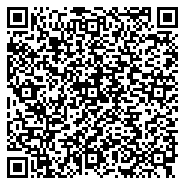