Association between vitamin D deficiency and weight gain in children: A cross-sectional study.

Introduction: Obesity in children is a serious and growing health problem. Its prevalence has significantly in-creased over the past decades. Obesity is a risk factor for increased morbidity and mortality and is a multifactorial condition. Recently, studies on the association between vitamin D deficiency and obesity have been conducted. This study aimed to determine the relationship between vitamin D deficiency and weight gain in children in Jeddah, Saudi Arabia. Methods: This cross-sectional study included 321 healthy children (176 girls and 145 boys) from an ambu-latory pediatric clinic at King Abdul-Aziz University Hospital between November 2017 and April 2018. The anthropometric variables of each child were obtained, and blood samples were obtained to measure vitamin D, thyroid and parathyroid hormone, and calcium levels. Results: The participants included 176 (54.8%) girls and 145 (45.2%) boys with a mean age of 9.8 ± 3.8 yrs. The average body mass index was 18.01 ± 3.5 kg/m2, and the mean vitamin D level was 26.4 ± 10.6 nmol/L for both sexes. Vitamin D deficiency was identified in 96.5% of the partici-pants, and only 3.5% had normal vitamin D levels. A significant association was observed between body weight and vitamin D deficiency (P value=0.013 and Pearson correlation coefficient=-0.2). The results showed an inverse relationship between vitamin D deficiency and body weight, i.e., any decrease in vitamin D levels inversely affected body weight. Conclusion: Vitamin D deficiency was inversely associated with weight gain in children.

Childhood Obesity has become a serious public health problem in the 21st century [1]. The prevalence of childhood obesity has significantly increased over the past few decades in both developed and developing countries, and a recent report showed that the worldwide prevalence had increased by 47.1% in 30 yrs, affecting approximately one-third of the world’s population [2]. In 2016 the number of overweight children under the age of five is estimated to be over 41 million across the world [1]. The prevalence of childhood obesity in Saudi Arabia has been increasing, and the eastern and central regions have the highest percentage of overweight and obese children than in other regions in the country [3,4]. Overweight is defined as A Body Mass Index (BMI) greater than or equal to the 85th percentile and below the 95th percentile for children of the same age and sex. Obesity is defined as a BMI greater than or equal to the 95th percentile for children of the same age and sex [5]. There are multiple medical and psychosocial consequences of obesity including, hypertension, hyperlipidemia and increased risk of cardiovascular diseases, impaired glucose tolerance and type 2 Diabetes, liver disease, anxiety, depression, Low self-esteem and Social problems such as bullying [6]. Prevention of childhood obesity needs to be a high priority as its complications can be prevented. Obesity is a multifactorial condition and is a complex interaction between environmental, socioeconomic, and genetic factors [2]. Over the past decade, the number of studies on the association between vitamin D deficiency and obesity has increased, and meta-analysis results have indicated that obesity was associated with vitamin D deficiency [7]. Vitamin D deficiency has been recognized as major public health problems worldwide, the problem is observed profoundly in those from the Middle East [8,9]. Some studies regarding vitamin D deficiency in Saudi Arabia have indicated a high prevalence of vitamin D deficiency among children [10]. High prevalence of vitamin D deficiency was detected in children living in Jeddah [11]. Other regions in Saudi Arabia had limited data. Vitamin D deficiency is defined as a 25(OH)D level less than 50 nmol/L, Vitamin D insufficiency is defined as a 25(OH)D concentration 50 to 75 nmol/L [12]. Vitamin D is endogenously synthesized when the skin is exposed to ultraviolet sun rays, sources of vitamin D include fatty fish like salmon and tuna, eggs, and vitamin D fortified product and supplements [13]. In Saudi Arabia studies regarding the association of vitamin D deficiency and obesity is limited [14]. Therefore, the purpose of this study was to determine the relationship between vitamin D deficiency and weight gain in children in Jeddah, Saudi Arabia.

Objective of the Study

The study has formulated desired outcomes to evaluate the connection between vitamin D deficiency and weight gain.

This cross-sectional study was conducted in an ambulatory pediatric clinic at King Abdul-Aziz University Hospital (KAUH) in Jeddah, Saudi Arabia. The research ethics committee of KAUH approved this study, and a written informed consent was obtained from all participants before enrollment.

Between November 2017 and April 2018, 321 healthy children (176 girls and 145 boys) aged between 4 and 13 yrs were randomly selected and interviewed. A survey was conducted to collect data on self-reported and direct measures of health, and a questionnaire was filled up by their families. Then, the weight and height of the participants were measured in kilograms (kg) and meters (m), respectively. The children were excluded if they used vitamin D or calcium supplements, had chronic disease or endocrinopathies.

Fasting blood samples were obtained from the children to measure vitamin D, thyroid and parathyroid hormone, and calcium levels.

Data were entered, coded, cleaned, and analyzed using the Statistical Package for Social Sciences software version 22 (IBM Corp., Armonk, NY, USA). In total, 321 children from the medical clinics at KSA, Makkah region were included. Of these children, 176 (54.8%) were girls and 145 (45.2%) were boys.

Simple descriptive statistics were reported as proportions for qualitative variables, such as frequencies and percentages of the prevalence of obesity and vitamin D level. In addition, statistical data were reported as mean and standard deviation for quantitative variables, such as the mean of BMI ± SD and vitamin D level. The analysis was conducted by testing the difference between body measurements and vitamin D levels among boys and girls using the independent sample t-test after we assumed that the data followed a normal distribution, which depends on the normal curve and excluded some of the outliers of the continuous variables. Pearson correlation coefficient was used to test whether there was a significant relationship between vitamin D level and body measurements, and the linear regression model was used to predict log weight by vitamin D in a linear equation. A P value of<0.05 was considered significant. 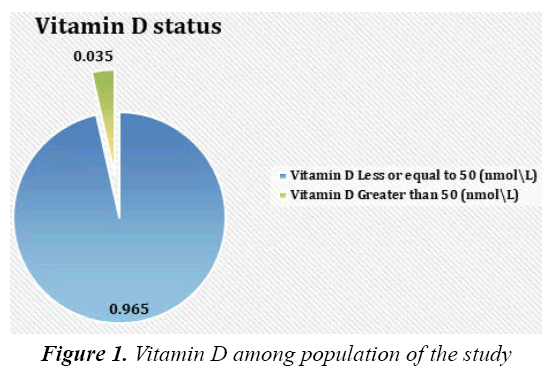 Figure 1: Vitamin D among population of the study 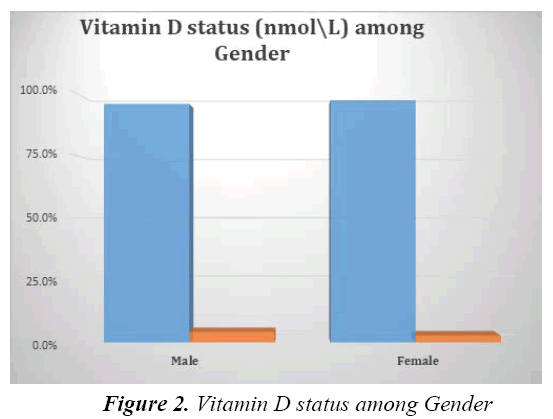 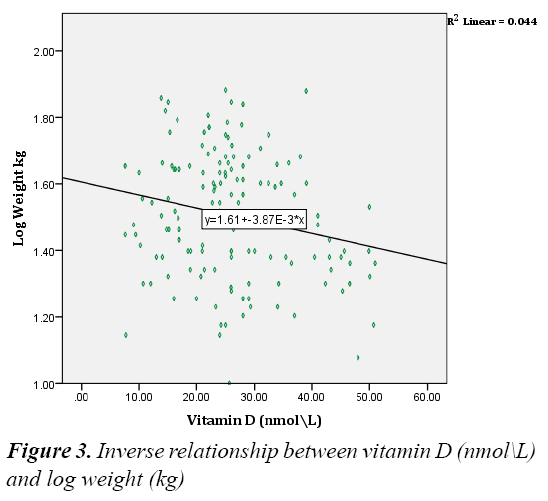 In this study, we examined the association between vitamin D deficiency and weight gain in children. A significant inverse relationship was found, as the decrease in vitamin D leads to an increase in weight gain. Obesity has become a significant public health problem [1]. Its complications can lead to increased morbidity and mortality [6], it is a multifactorial condition, and by knowing the modifiable risk factors we can interfere early and prevent the progression of obesity [2]. In the past decade, an increased number of studies have assessed the association between vitamin D deficiency and Obesity [7]. A study by Al Asoom yielded the same results as our present study; it included Young Females in Dammam, Saudi Arabia. Showed a significant negative correlation of plasma 25-OH vitamin D with BMI and waist circumference [15]. A Cross-Sectional Study was conducted by some investigators of Ethiopia, they assessed over-weight/ obesity with regard to vitamin D status in Ethiopian schoolchildren, and their results comply with the same results of the current study. It has been estimated that Vitamin D deficiency in schoolchildren was significantly associated with overweight and/or obesity [16]. Another study was conducted on healthy pre-pubertal children in Varna, Bulgaria. Vitamin D deficiency was identified in 51.7% of pre-pubertal boys and in 65.0% of the girls. The study resulted that there is an inverse relationship between 25-hydroxyvitamin D and waist circumference [17]. Also, multiple prospective studies and randomized clinical trials yielded the same results [18-20].

The mechanism behind this relationship between vitamin D and obesity is still not completely established. It can be explained by various hypothesis, some past studies suggest that the connection between vitamin D deficiency and obesity can occur because of the influence of vitamin D metabolites on adipokine production and the inflammatory response in adipose tissue [21]. Therefore, vitamin D deficiency can lead to dysregulation of adipose tissue [22]. In contrast to our results a study was done by Karani S Vimaleswaran et al, indicates that a higher BMI leads to a lower vitamin D, while any effects of vitamin D deficiency increasing BMI are likely to be small [23].

This study has some limitations. It represents the eastern region of Saudi Arabia and can’t be generalized to other populations.

The findings of our study have an important implication. Obesity has major complications that can be prevented. It is important to know and understand its modifiable causes, for early intervention and prevention. As our results indicated that vitamin D deficiency is a cause, awareness of this problem must be implicated to the public.

Vitamin D deficiency and Obesity are universal public health issues, for all ages. Both can cause serious health consequences, particularly among young children. This study has demonstrated a significant impact of Vitamin D deficiency on weight gain development in children. So, to prevent this problem it is important to raise awareness and education to involve healthy nutrition for children that contain rich sources of vitamin D and the addition of vitamin D supplement. Further studies that include more regions in Saudi Arabia are recommended.