Functional Dyspepsia (FD) is one of the most common functional gastrointestinal disorders, which remains as a great burden to the healthcare system. Although the etiology and the pathogenesis of FD are not yet completely clear, the duodenum has been suggested as the key position of FD. In order to examine the association between food allergy and duodenal mast cells in patients with FD, the current study performed a retrospective review on 48 patients. Mucosal tissue specimens were obtained from the duodenal bulb and descending duodenum. IgG antibody in the serum was then detected using enzymelinked immunosorbent assay. Toluidine blue staining was used to identify mast cell counts and degranulation rates. According to the results of Pearson rectilinear correlation analysis, mast cells were significantly increased in patients with FD compared with the number in healthy volunteers (P<0.01). Degranulation ratios (%) of mast cells in patients were also significantly increased (P<0.01). Positive rates of IgG to certain types of food in patients with postprandial distress syndrome and epigastric pain syndrome were significantly increased, and the kinds of food allergen-specific antibodies and scores of IgG in the serum were significantly increased compared with the controls (P<0.01). Allergen-specific IgG scores and types demonstrated positive correlations with cell counts (r=0.247, P=0.038; r=0.243, P=0.041) and degranulation rates (r=0.307, P=0.011; r=0.326, P=0.007) of mast cells. Thus, these findings suggested that food allergy in patients with FD may increase cell counts and degranulation ratios of duodenal mast cells.

Functional Dyspepsia (FD) is one of the most common functional gastrointestinal disorders, which remains a great burden to the healthcare system and has a considerable negative socioeconomic impact [1-4]. It is diagnosed when upper gastrointestinal endoscopy reveals no organic lesions that can explain the dyspeptic symptoms. According to the Rome III criteria, FD is divided into two subgroups, namely Postprandial Distress Syndrome (PDS) and Epigastric Pain Syndrome (EPS), in order to simplify the intricate heterogeneity of this symptom complex and to help select an appropriate treatment strategy [5]. PDS is characterized by the presence of meal-induced dyspeptic symptoms, including early satiation and postprandial fullness, while EPS is defined as meal-unrelated symptoms with the presence of burning sensation or epigastric pain [6].

Although the etiology and pathogenesis of FD are not completely clear yet, the duodenum has been suggested as a key position of FD [7]. According to earlier studies, patients with FD also suffered from food allergies at the same time [8,9]. Food allergy involves the immune system. Mast cells in the duodenum are important local immune effector cells, and have been found to be involved in the pathogenesis of FD [10-12]. It has also been demonstrated that in the gastric corpus and antrum of adults with FD, mucosal mast cell density was evidently increased, which is generally isolated to the stomach of adults with FD [13]. Yuan et al. observed that the counts and degranulation rate of mast cells in the bulb of the duodenum are significantly increased in FD patients [14].

Mast cells express multiple IgG Fc receptors, which function as important participants in protective immune responses to pathogens, cross-linking elicit mast cell activation in allergy and also serving a vital role in autoimmunity [15]. Although it remains unclear whether the presence of food-specific IgGs in patients with adverse food reactions can be utilized for diagnosis, serum food-specific IgG tests have been used in patients with chronic symptoms due to their convenience [16,17].

All animal procedures in the present study were approved by the Ethics Committee of Tai’an Central Hospital (Tai’an, China).

According to the Rome III criteria, dyspeptic symptoms of the upper gastrointestinal tract were divided into epigastric distension, epigastric pain, early satiety and epigastric ignition. The scores of severity were divided into four grades as follows: 0, asymptomatic; 1, mild symptoms; 2, moderate symptoms, but with no influence on work and life of patient; 3, severe symptoms, affecting the work and life of patient.

A gastroscope was used to collect two mucosal tissue specimens of the Duodenal Bulb (D1) and the Descending Duodenum (D2) from patients and controls. Mucosal tissues were then fixed in 10% formaldehyde solution, embedded in paraffin and cut into 3 μm sections. Next, sections were stained in 0.5% toluidine blue for 20-30 min and differentiated in 0.5% glacial acetic acid until the nucleus and cytoplasm particles were distinct. Subsequent to rinsing for a few seconds, the sections were dried and enveloped with neutral balsam. Mast cells in the sections were then counted under a microscope. The degranulation rate (%) of mast cells was calculated as the degranulation cell count over the mast cell count.

The results were analyzed with SPSS version 13.0 software (SPSS, Inc., Chicago, IL, USA). Data are presented as mean ± standard deviation. Means comparison of multi-samples were analyzed with analysis of variance. Means in two samples were compared with t-test. The correlations of IgG with mast cell counts and degranulation rate were analyzed by Pearson correlation analysis. For all tests, a P-value of <0.05 was considered to indicate a statistically significant difference.

Table 1: FD symptoms and severity scores of these symptoms in the included patients.

Staining with haematoxylin-eosin demonstrated that the D1 and D2 tissues were normal in terms of histological structure. Furthermore, symptoms of acute duodenitis, intestinal parasite infections and tumor signs were not identified in any of the patients and controls.

Following staining with toluidine blue, nuclei were stained with a blue color and cytoplasm particles appeared red. Normal cells presented uniform cytoplasm and a clear membrane. Cells with degranulation were irregular with a broken membrane, releasing particles around the membrane. As shown in Table 2, mast cell counts and degranulation ratios in the D1 and D2 samples obtained from the FD patients (including PDS and EPS) were significantly increased when compared with the control samples. Mast cells in a representative D1 tissue samples are shown in Figure 1, while cells in a D2 tissue sample are shown in Figure 2. As shown in Table 3, the associations of cell counts and degranulation ratios with the symptom severity scores were analyzed, and the results demonstrated no statistically significant correlation (P>0.05). 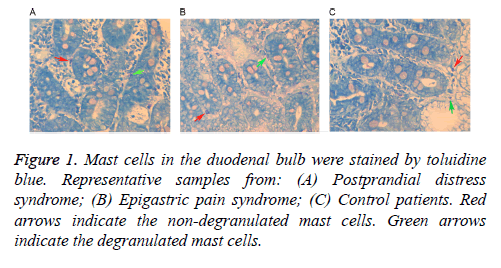 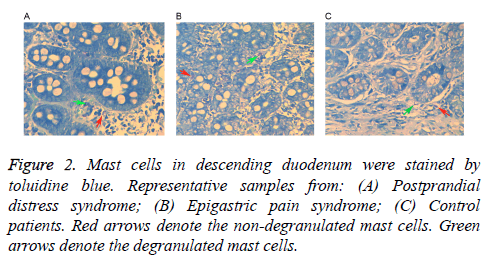 Table 2: MC counts and degranulation ratios (%) in the D1 and D2 samples of the FD patients (including PDS and EPS patients).

Detection of food-specific antibodies in the serum

Analysis of correlations of IgG

In FD patients, symptom scores were analyzed with no correlations observed with positive kinds and positive scores of IgG (P>0.05), as shown in Table 6.

Table 6: Correlations of symptom scores with positive kinds and positive scores of IgG.

By contrast, a positive association was identified between the mast cell counts and presence of IgG antibody (P<0.05), as shown in Table 7.

Table 7: Correlations of mast cell counts with the positive kinds and positive scores of IgG.

Food may not be entirely digested due to the lack of a specific digestive enzyme. The remainder proteins enter the blood or lymph fluid in the form of large molecules, which are recognized as antigens by the body’s immune system, thus inducing food-specific IgG antibodies [19]. Park et al. demonstrated that food-specific IgG antibodies, particularly IgG4, increased significantly in patients with irritable bowel syndrome, indicating that IgG4 was associated with visceral hypersensitivity in certain subtypes of IBS patients [9]. However, the present study observed that there were no correlations between allergen-specific IgG antibody and symptom scores, which were consistent with the findings of other earlier studies. This phenomenon may be associated with the following factors: (i) Food-associated symptoms may be due to food intolerance rather than food allergy, and thus there is no change in IgG; (ii) Food-associated symptoms may be caused by other factors, such as saccharides, cellulose and caffeine in food [20].

The kinds and positive rates of food-specific IgG antibodies were positively correlated with the activation of mast cells in the duodenum in the present study, indicating that the effect of food allergy-specific IgG antibodies on gastrointestinal functions was possibly on the basis of mast cell activation in the duodenum. Food allergen leads to the infiltration of mast cells in the intestinal tract [24,25]. Mast cells are activated by IgG subsequent to binding to IgG receptors on the surface of cells. Another factor involved in mast cell activation is the antigen-antibody complex, which refers to the combination of IgG and the relevant antigens [26]. Furthermore, IgG was suggested to be a protective antibody of IgE hypersensitivity, since food allergen-specific antibodies of IgG and IgE increased simultaneously in patients with functional gastric or intestinal disease. Therefore, it was further speculated that in FD patients, IgE activates mast cells and generates anaphylaxis, followed by the production of IgG, and the anaphylaxis was limited in the gastrointestinal mucosa by certain unclear factors, resulting in food allergy-associated gastrointestinal symptoms, but without other symptoms observed [27].