Objective: To determine whether or not the apoE gene increases the risk of heart blood stasis syndrome (HBSS) in premature coronary heart disease (PCHD) pedigrees.

Methods: Twenty-eight core pedigrees with PCHD and HBSS were collected. The apoEε2/ε3/ε4 genotype was measured using a PCR-RFLP technique. HHRR and TDT were used with core pedigrees based on the result that the apoE polymorphism was linked with PCHD.

In recent years there has been a trend for younger age at onset of coronary heart disease (CHD), which is termed premature coronary heart disease (PCHD) [1]. It is known that CHD is a multifactorial disease; specifically, CHD is a polygenic disease affected by environmental and genetic factors [2]. The occurrence and development of CHD is related to a variety of susceptibility gene polymorphisms, especially the apolipoprotein E (apoE) gene polymorphism. The theory of traditional Chinese medicine holds that the underlying pathogenesis of CHD involves blood stasis, which is the most common syndrome in patients with CHD [3] and PCHD. Therefore, in order to provide evidence for clinical prevention and treatment of coronary heart disease, whether or not the apoE gene polymorphism is one of the genetic and molecular biological markers in PCHD stasis pedigrees within the Hunan han nation population is worthy of further study.

Objective of the study

A clinical epidemiologic study was conducted with a focus on coronary syndromes between October 2007 and December 2013 in the Changsha region, A total of 2356 people with CHD who met the WHO diagnostic criteria [4] and some people who had additional genetic studies and provided informed consent were enrolled.

The total number of the health control family members were 46 cases, aged (55.48 ± 10.20) years old, male 21 cases, female 25 cases. There were no significant differences in gender and age gender and age in three groups. The premature coronary blood stasis pedigree was defined as follows: proband (males<55 years of age and females<65 years of age) with PCHD and blood stasis; and a first-degree family member (parents, siblings, and offspring) with premature coronary blood stasis.

PCHD was diagnosed according to patient age, clinical symptoms, signs, history, and ECG changes on the basis of the 1979 WHO ischemic heart disease, angina, and myocardial infarction diagnostic criteria. The Chinese medical syndrome differentiation standards of CHD were according to the syndrome differentiation classification standards of The People's Republic of China, pharmaceutical industry standards, and the TCM syndrome diagnosis standards. Healthy control family group of random individuals: Hunan Han healthy families randomly selected with proof of good health based onlaboratory and physical examinations.

Subjects were required to meet the above criteria, and could meet the following conditions:

• The subjects of this detection were the family.

• The family had at least 2 members who had been diagnosed with premature coronary artery disease. Subjects were not limited to gender.

• Hepatitis, tuberculosis, and other infectious diseases.

• Diseases of the nervous system.

• Patients refuse to sign the informed consent or estimation of compliance is poor.

• In other clinical trials of patients. 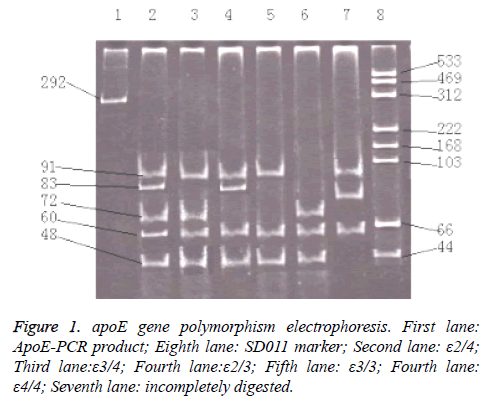 The details of the study were explained to the subjects and the study was approved by the Hunan University of Traditional Chinese Medicine Ethics Committee.

Statistical analyses were performed with SPSS 16.0. The genotype and gene frequency distribution were compared by a χ2 test. In core pedigrees, genetic association analysis associated with alleles and disease were analyzed by haplotype relative risk and a transmission disequilibrium test, and a χ2 test was used to demonstrate differences in the rate of distribution.

Comparison on the general data

ApoE gene polymorphism analysis showed that 3 alleles were detected in 28 PCHD patients and their parents, and the differences between the apoE gene frequency distribution of patients or parents observed and predicted were not significant (P>0.05; Table 3), which were in accordance with the Hardy- Weinberg equilibrium. It was shown that the samples were from a larger and random mating equilibrium population.

Based on the haplotype HHRR analysis for 28 core pedigrees, among apoE (2N) alleles of the blood stasis pedigrees, 4 (W) ε4 gene transferred, 11 (Y) did not deliver, 32 (X) transferred among 57 non-ε4 genes, and 25 (Z) did not transfer. Typing coronary blood stasis was associated with apoE ε4 gene polymorphism (P<0.05; Table 5).

According to genetic epidemiology studiesthe incidence of CHD of the first-degree relative was 2-10 times non-CHD, and the familial aggregation of CHD existed. CHD in relatives occurred sooner, and the risk of individuals with CHD was higher [6,7]. In the past, we [8-11]conducted genetic pedigree analysis on 54 patients with CHD blood stasis probands and 54 healthy people, which suggested that there is a causal relationship between children with coronary blood stasis and parental illness. Studies have shown that coronary blood stasis syndrome may be a "multi-gene evidence" with a genetic predisposition.

The main physiologic functions of apoE are important components of plasma lipoproteins, LDL, some HDL subtypes, and ligand binding with receptors of LDL and apoE. There are three major isomers in human apoE (E2, E3, and E4), coded by three alleles (ε2, ε3, and ε4) of a locus. The different affinities between the three major isomers and apoE receptors affect lipid metabolism, and different apoE gene polymorphisms affected the individual lipid levels [12]. Findings confirmed the ε4 allele was a risk factor to coronary arteriosclerosis and CHD, and the difference in the prevalence of CHD in different regions was associated with the distribution of apoE phenotype.

Heidari [13] suggested that the ɛ3/ɛ3 and ɛ3/ɛ4 genotypes were predisposing factors in Iran. Yin [14] suggests an association between the apoE ε4 allele and an increased risk of CAD in a Chinese population based on the present meta-analysis. Zhu et al. [15] observed that the ε4 allele frequency of patients with CHD<55 years of age was significantly higher than the frequency in patients>61 years of age and healthy subjects, suggesting that the apoε4 allele may be independent and be susceptible genetic risk factors of premature CHD. Ding et al. [16] found that the heterozygous genotyping apoE ε4/3 and the frequencies of the ε4 allele in the early-onset CHD group were significantly higher than age-matched controls (P<0.05). The occurrence of early-onset CHD is affected by apoE gene polymorphisms. Zhang et al. [17] also thought that different genotypes are associated with CHD through serum lipids.