Background: Alternations in mitochondrial DNA (mtDNA) have long been proposed to be involved in the pathogenesis of ovarian cancer (OC). However, the allele frequency of mitochondrial tRNA (mttRNA) variants in OC remains largely understood.

Objective: To explore the potential association between mt-tRNA variants and OC.

Methods: 95 OC patients and 50 control subjects were participated in this study. The 22 mt-tRNA genes were PCR amplified and subsequently sequenced by ABI-3700 automatic DNA sequencer. Moreover, we used phylogenetic approach to determine the pathogenic status of these mt-tRNA variants.

Results: We identified 4 mt-tRNA variants: the tRNAThr A15951G; tRNAHis G12192A; tRNAGlu A14693G and tRNALeu(UUR) A3302G, whereas these tRNA variants were absent in healthy controls. Moreover, these variants localized at positions which were highly conserved between different species, and may cause the failure in mt-tRNAs metabolism, consequently result in mitochondrial dysfunction that responsible for OC.

Conclusions: Variations in mt-tRNAs may be associated with OC.

Ovarian cancer (OC) is the seventh most common malignancy. It was estimated that in 2012 about 152,000 women died of OC in the world [1]. The incidence of OC in women under the age of 40 years was reported to be 2~14% and had been increasing in recent year [2]. Approximately 70% of patients with OC were diagnosed at an advanced stage, with associated poor prognosis, even after aggressive and immediate treatments. However, up to date, the molecular mechanism underlying OC remained poorly understood [3].

OC cells, similar to other solid tumour cells and in contrast to normal cells, heavily relied on aerobic glycolysis for energy production, a phenomenon known as the Warburg effect [4]. This effect, which was manifested by increased glucose consumption, decreased oxidative phosphorylation (OXPHOS) and accompanying lactate production, had been confirmed and was generally accepted as it had been demonstrated in various tumours. Mitochondria were vital energy-producing organelles in eukaryotic cells that were primarily responsible for generating ATP by OXPHOS. Their efficient functioning was determined by both the nuclear genome and the maternally inherited 16.6-kb mitochondrial genome [5]. Mitochondrial dysfunctions caused by mitochondrial DNA (mtDNA) mutations had been found to be associated with a large number of human cancers, including OC [6]. Owing to the lack of histones protection and a poor DNA repair system, mtDNA had a higher mutation rate than nuclear DNA [7]. Among these, mitochondrial transfer RNA (mt-tRNA) genes were the hot spots for pathogenic mutations associated with OC. However, the frequency of mt-tRNA mutations in OC was not fully elucidated.

In this study, we performed a mutational analysis of mt-tRNA genes in 95 OC patients and 50 healthy subjects using PCR and direct sequence. As a result, we identified 4 potential pathogenic mt-tRNA mutations.

Screening for the variants in mt-tRNA genes

Genomic DNA was isolated from the whole blood of participants using Puregene DNA Isolation Kits (Gentra Systems, Minneapolis, MN). The fragments spanning all 22 of the mt-tRNA genes of 95 patients and 50 control samples were PCR-amplified by use of sets of the light-strand and the heavy strand oligonucleotide primers as mentioned in a previous investigation [8]. Each fragment was purified and subsequently analyzed by direct sequencing in an ABI 3700 automated DNA sequencer using a Big Dye Terminator Cycle sequencing reaction kit. The resultant sequence data were compared with the updated consensus Cambridge sequence (GenBank accession number: NC_012920) [9].

The published secondary structures for the mt-tRNAs were used to define the stem and loop structure [10].

A total of 17 vertebrates’ mtDNA sequences were used in the interspecific analysis. These included Bos taurus, Cebus albifrons, Gorilla gorilla, Homo sapiens, Hylobates lar, Lemur catta, Macaca mulatta, Macaca sylvanus, Mus musculus, Nycticebus coucang, Pan paniscus, Pan troglodytes, Papio hamadryas, Pongo abelii, Pongo pygmaeus, Tarsius bancanus, and Xenopus laevis (Genbank; Table 1). The conservation index (CI) was calculated by comparing the human nucleotide variants with 16 other vertebrates. The CI was then defined as the percentage of species from the list of 17 different vertebrates that had the wild-type nucleotide at that position.

Screening for the variants in 22 mt-tRNA genes

Table 2. Variations in the mt-tRNA genes in 95 subjects with OC and 50 healthy controls. 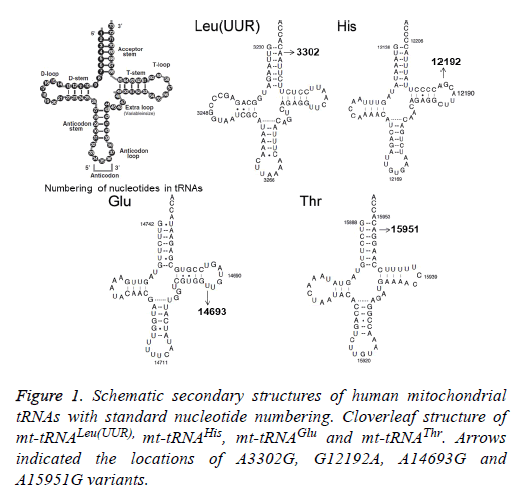 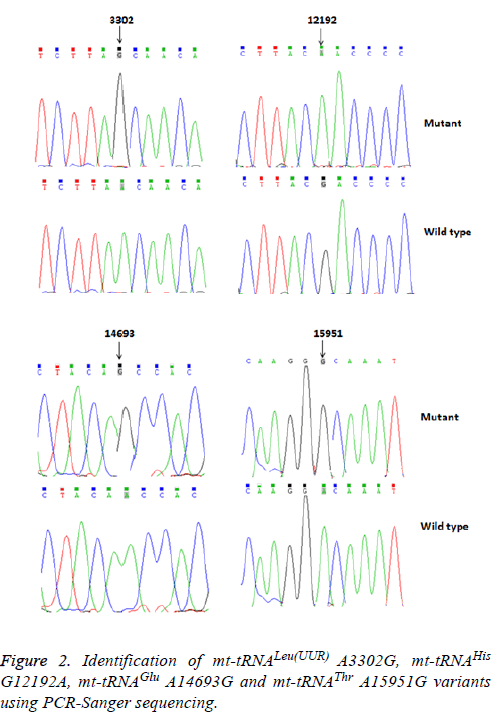 To identify putative deleterious mutation, these variants were further evaluated using the following 3 criteria: (1) present in <1% of the controls; (2) CI>75%, proposed by Ruiz-Pesini and Wallace [11]; (3) potential structural and functional alterations. First, we used the secondary structure of mt-tRNAs to localize each variant with either a stem or a loop and to analyze if the base changes within stems altered the classic Watson-Crick base pair. As shown in Figure 2; 2 variants were localized at the acceptor arms, 2 variants occurred at the T arms. Notably, the A3302G and the A15951G variants disrupted the highly conserved Watson-Crick base-pairing. While the G12192A and the A14693G variants created the novel base-pairing in the T arm of the corresponding tRNAs. In addition, a phylogenetic analysis was performed by comparing the human tRNA nucleotide variants with those in 16 other vertebrates. We took the A14693G variant as an example, as shown in Table 2 and Figure 3, the A3302G, G12192A, A14693G and A15951G variants had very high levels of evolutionary conservation (CI=100% for all). Whereas the T4454C and T10463C variants showed lower levels of evolutionary conservation, with the CIs of 44.6% and 31.5%, respectively. Based on these criteria, we proposed that the tRNALeu(UUR) A3302G, tRNAHis G12192A, tRNAGlu A14693G and tRNAThr A15951G variants may have functional significance. 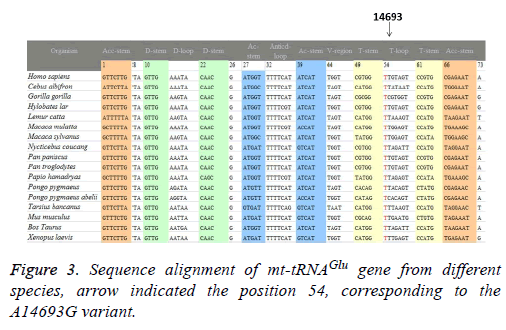 In the present study, we screened the potential pathogenic mttRNA mutations in patients with OC. OC was the result of the interaction of multiple genetic and environmental factors, many reports showed that multiples genes may be involved in the pathogenesis of this disease [12-14]. However, these genes were mainly nuclear genes; little was known the role of mitochondrial dysfunction in OC. Since mitochondria used OXPHOS to convert dietary calories into usable energy, releasing reactive oxygen species (ROS) as a toxic by-product. A significant number of epidemiological and clinical studies support the relationship between increased ROS and the pathogenesis of OC [15,16]. Moreover, gene encoding tRNA was the hot spot for pathogenic mutations associated with human mitochondrial diseases. Upto date, over 150 different pathogenic mutations have been reported which are located within mt-tRNA genes [17]. However, the frequency of mttRNA mutations in OC remained largely unknown.

For this purpose, we recently initiated a systematic mutational screening for mt-tRNA genes in 95 patients with OC, as well as 50 control subjects. Sequence analysis of the 22 mt-tRNA genes revealed the presence of 4 variants: tRNALeu(UUR) A3302G, tRNAHis G12192A, tRNAGlu A14693G and tRNAThr A15951G. As shown in Figure 1 and Figure 2, the A3302G variant was localized at the highly conserved acceptor arm of tRNALeu(UUR), disrupted the Watson-Crick base-pairing (2T-71A). It was anticipated that this variant could affect the addition of the CCA triple to the 3’ terminus by the tRNA nucleotidyltransferase. In addition, the A3302G variant was described in patients with mitochondrial encephalomyopathy, lactic acidosis, and stroke-like symptoms (MELAS), cardiomyopathy, and myopathy with respiratory insufficiency [18,19]. This variant caused the severe respiratory chain complex I deficiency and lowered complex IV activity. Moreover, a significant reduction in the steady-state level of tRNALeu(UUR) was observed in cell carrying this variant [20]. Studies concerning the functional role of A3302G variant showed that it led to abnormal processing of the mt-16SrRNAtRNALeu( UUR)-ND1 precursor RNA [21]. Therefore, the A3302G should be regarded as a pathogenic mutation associated with OC. However, this mutation was not reported frequently according to the Mitomap database [17].

The G to A transition at position 12192 was first identified in a 60-year-old Japanese man with cardiomyopathy [22]. This variant was located 2 bp from the 3’ end of the T loop of the tRNAHis gene, which was very conserved from bacteria to human mitochondria. In addition, the G12192A had been regarded as a secondary variant for increasing the penetrance and expressivity of Leber’s Hereditary Optic Neuropathy (LHON)-associated ND4 G11778A mutation, however, its allele frequency was very low, since most of the cases were sporadic [23]. In addition, the homoplasmic A14693G variant was localized at the extremely conserved nucleotide of tRNAGlu [24]. Interestingly, the A to G variant at position 14693 occurred at the first base (conventional position 54) of the T loop of tRNAGlu. In fact, nucleotides at position 54 of the T loop of tRNA were often modified, thereby contributing to the structural formation and stabilization of functional tRNAs [25]. Thus, the structural alteration of the tRNA by the A14693G variant may lead to a failure in tRNA metabolism. In a recent study, we noticed that the A14693G variant may modulate the clinical expression of deafness-associated mitochondrial 12S rRNA A1555G mutation [26]. However, its frequency was not very high, we noticed that among 63 deafness pedigree with the A1555G mutation, only 2 subjects carrying this variant [26].

In summary, our data provided the first evidence for the association between mt-tRNA variants and OC. The main limitation of the current study was the small sample size, further studies including more patients should be performed.

This work was supported by the Guangdong Provincial Science and Technology Project (No. 2011B061300048).