Background: Pain is a very frequent symptom of acute burden towards the body. Pain is frequently seen among most cancer patients.

Objectives: In this study, we aimed to present a Pain Frequency Intensity and Burden Scale (P-FIBS) in Turkish.

Materials and Method: The participants completed the sociodemographic form, VAS, SFMPQ and PFIBS. The Cronbach α and fit indexes were calculated.

Limitations: The number of participants could be more increased but the fit indexes were excellent for our sample.

Conclusions: In a study conducted previously in Turkey, the general pain average was 63.7%. In our study, this ratio was found as 99.93% for VAS, 95.7% for SF-MPQ and 97.1% for P-FIBS. It stems from the characteristics of the study population. Our study (P-FIBS) is the first study conducted among cancer patients in the world and has a good internal reliability and validity. In Moroccan, Persian and British studies conducted with SF-MPQ, the descriptors were equal to ours.

Pain is a warning message of possible or actual injury to the body. International Association for the Study of Pain (IASP) described pain as “an unpleasant sensory and emotional experience associated with actual or potential tissue damage, or described in terms of such damage” [1]. The Joint Commission on Accreditation of Healthcare Organizations described the pain as the “fifth vital sign” [2]. A physician should be familiar with this symptom [3]. Pain perception is described as neuromatrix theory of the pain influenced by many factors. This theory suggests that people experiencing pain live it as a cognitive, sensitive and perceptive complex originated by many areas of the brain. Pain is not considered as a single sensitive input but as a complex input sent to the neuro-matrix [4]. According to a study, 100 million citizens suffered of pain and this cost $ 600 billion annually in United States [5].

In this study, the aim is to introduce the cross-cultural Turkish adaptation of a new pain scale, P-FIBS, which may be useful in the clinical use along with the other valuable pain scales for the patients suffering of pain in Turkey.

The study is performed among the cancer patients who had been followed-up in Saglik Bilimleri University, Izmir Tepecik Training and Research Hospital, Oncology Outpatient Clinic between Jan and Mar 2016. Firstly, it was planned to include 155 cancer patients with their own consents. However, 17 of them did not complete the questionnaire successfully. In total, it was 138 patients who had completed the questionnaire. The questionnaire constituted of a sociodemographic form (age, gender, economic and educational level, diseases and pain duration) and VAS, SF-MPQ and P-FIBS.

Visual Analogue Scale (VAS) is an instrument measuring a characteristic or attitude (pain etc.) among values ranging from none to the extreme amount. Generally VAS is a horizontal line in 100 mm length. The line could be also vertical. Left side means “no pain” i.e. zero, right side means maximum pain. The patient marks the extent of the pain she feels on the line. VAS is a uni-dimensional measure of pain intensity (A4). The cut points are: no pain (0-4 mm), mild pain (5-44 mm), moderate pain (45-74 mm) and severe pain (75-100 mm). Testretest reliability is good (r=0.94, P<0.001).

The SF-MPQ is a shorter multi-dimensional version of Mc Gill Pain Questionnaire. It was developed by Melzack. The short form consists of 15 words (11 sensory and 4 affective). The ratings are 0=none, 1=mild, 2=moderate or 3=severe. The SFMPQ also includes 1 item for present pain intensity and 1 item for a 10 cm Visual Analog Scale (VAS) for average pain. The Cronbach alpha coefficients were estimated at α=0.73-0.89. The test-retest reliability ranged between 0.45-0.73.

P-FIBS were developed by De la Cruz. It is a brief and selfadministered scale for the measurement of pain frequency, intensity and burden. Items are rated by 0-8 Likert scale. Lower scores indicate less pain or burden during the past week. Item-total correlations coefficient ranged between 0.70-0.85 with a high Cronbach’s alpha coefficient 0.90.

Classical Test Theory (CTT) analysis was used to assess the item-correlation and Cronbach α. The Confirmatory Factor Analysis was performed to measure the fit indexes with the AMOS program. The Pearson Correlation was performed between the scales by SPSS Program, version 22. 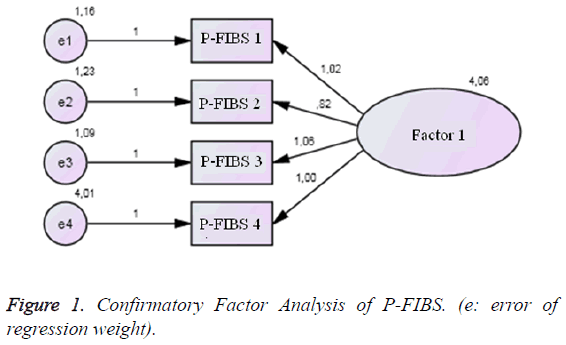 The original study of P-FIBS was firstly used to assess the pain degree among psycho-stimulant drug abuse treatment patients doing aerobic exercise for relapse prevention. However, the use of it has been confirmed in every case with high reliability and validity. Having translated the P-FIBS, our study is the first study conducted among cancer patients in the world. We also had a high reliability and convergent validity. Turkish PFIBS has some advantages over the other pain scales such that it assesses multiple aspects of the pain and not only the intensity like VAS and NRS. In addition, Turkish P-FIBS assesses the effect of the pain in daily life. It is also shorter than the other scales like Mc Gill and Brief Pain Inventory (BPI). It is also easier and faster to complete than other scales [8].

In the Persian adaptation study of SF-MPQ-2, the Cronbach α was 0.88, which is similar to our study, and the correlation coefficient (r) between the items was around 0.6, which is the case in our study [15].

In the study performed in the UK among malignant pleural mesothelioma patients where many pain scales are used for describing the pain, SF-MPQ was also included. The top three frequent sensory descriptors of SF-MPQ scales were “aching”, “tender” and “sharp” [14]. These descriptors were similar to ours.

The number of the participants could be considered insufficient. But a larger sample could not pose a better result than ours because P-FIBS had an excellent goodness of fit index in our sample, too.