Department of Foods and Nutrition, Faculty of Family and Community Sciences, The Maharaja Sayajirao University of Baroda, Vadodara -390 002, Gujarat, India

Diabetics are more vulnerable to cardiovascular diseases and therefore there is a need to look for new markers to assess the risk. Aims of the present study are to assess the C-reactive protein (CRP) and fibrinogen levels in type 2 diabetes mellitus subjects. In a case control study, stable type 2 diabetics were enrolled from pathology lab and controls were enrolled from free living population. Anthropometric profile, lipid profile, CRP and fi-brinogen levels were assessed on 27 stable type 2 diabetics and 30 normal subjects. Students t test and correlation analysis were done using excel package. The data showed that the mean CRP and fibrinogen values were 1.7mg/L and 242 mg% in diabetics and 1.16mg/L and 296mg% in controls. Both CRP and fibrinogen levels were not influenced by elevated levels of BMI, WC, Total cholesterol and triglyceride levels in controls as well as the diabet-ics. However, in case of CRP significant correlation was found with Triglyceride (r=0.3, p= 0.05) and TG/H (r=0.4 , p=0.01). No positive correlation existed with fibrinogen values with any of the lipid indicators monitored. Thus traditional markers of TG and TG/H should be monitored regularly to assess the risk of CVD.

Diabetes Mellitus (DM) is a chronic disorder resulting from a number of factors in which an absolute or relative deficiency of insulin or its function occurs. The most common and life threatening disorder that besets type 2 diabetic subjects is coronary heart disease (CHD). Irre-spective of the ethnic background the risk for CHD among diabetic subjects is greater by a factor of 2 to 4 compared to non-diabetic subjects [1].

As diabetics are at risk of CVD, therefore there is a need to identify markers which would help in prognosis and diagnosis of the disease. C-reactive protein (CRP), an acute phase reactant has long been considered as a classic marker for inflammation. Acute inflammation, infection, or tissue injury induces a marked increase in CRP. As atherosclerosis involves inflammation of the vascular en-dothelium, CRP levels tend to be raised [4]. Several pro-spective clinical case control studies in Europeans have identified CRP as a strong, independent risk factor for CAD[5,6]. With the advent of high sensitive (Hs-CRP) assays this risk factor is gaining importance in the field of CAD and atherosclerosis. Basic research studies have revealed that inflammatory markers are high among sub-jects with insulin resistance and diabetes[7]. Inflamma-tion is considered to be a part of insulin resistance syn-drome and this to some extent explains the high risk for CAD among diabetic subjects[8].

Recent studies have identified defects in coagulation and the fibrinolytic cascade to play a major role in the patho-logical mechanisms leading to CAD. These two cascades consist of activators and inhibitors which regulate clot formation and vascular potency. Measurements of activa-tors, inactive precursors and inhibitors of this cascade have been considered as indicators of activity of these pathways. Fibrinogen is one of the key elements in this cascade. Fibrinogen levels have been shown to be associ-ated with enhanced platelet aggregation and smooth muscle cell proliferation. Furthermore, there is a strong asso-ciation of fibrinogen with blood viscosity and thrombus formation and circulating levels of fibrinogen have been known to have a strong and consistent relationship with CAD[9]

Thus CRP and Fibrinogen levels were estimated in type 2 diabetic subjects and compared with controls to assess CVD risk.

For this, a prospective case control study was conducted wherein 27 stable T2DM subjects who were regularly monitoring their blood sugar and who gave consent for the study were enrolled from the pathology lab over a period of one month. Based on medical records only sta-ble diabetics were enrolled i.e whose blood sugar did not fluctuate widely and were on same medication for past one year were enrolled for the study. Thirty controls (non diabetics) residing near the pathological laboratory having similar baseline characteristics as diabetics such as age and lifestyle factors (sedentary activity pattern, non smokers, non tobacco chewers and non-alcoholics were enrolled

Out of the 27 diabetics, 15 were males and 12 were fe-males. The control group consisted of 11 males and 19 female subjects. The study was approved by the departm- ental board of ethics committee. Data was then collected for all the subjects on anthropometry, FBS, HbA1c, lipid profile and inflammatory markers such as CRP and Fi-brinogen. All the biochemical estimations were done on fasting samples. FBS and lipid profile were estimated using enzymatic kit supplied by CHEMA. Ion exchange resin method (ACCUREX) was used to estimate the gly-cosylated hemoglobin (GHb). C-Reactive Protein (Latex) High Sensitive Assay method was used to estimate C - reactive protein (Roche/Hitachi cobas c system). Turbox Fibrinogen Orion Diagnostica was used to estimate Fi-brinogen levels (Orion Diagnostica Turbox Fibrinogen).

All the data was entered on excel and analysis was done using excel package. Students t test and correlation analy-sis were done to find out significant differences between the two groups. All tests were considered significant at p<0.05 level

Baseline Parameters and comparison of groups

The anthropometric profile of the study subjects showed that the diabetic subjects were overweight and had abdominal obesity as compared to the Normals representing the Control group (Table 1).

Table 5 shows the CRP levels of the diabetic and control subjects. The mean CRP levels in T2DM subjects was 1.70 mg/l, while that in case of control group subjects, it was 1.16 mg/l. In case of diabetic group, CRP levels were comparable between the two genders (1.73 mg/l Vs 1.66 mg/l). In the control group, the female subjects had a higher level of CRP as compared to male subjects (1.44 mg/l Vs 0.67 mg/l) but this difference was not statistically significant. 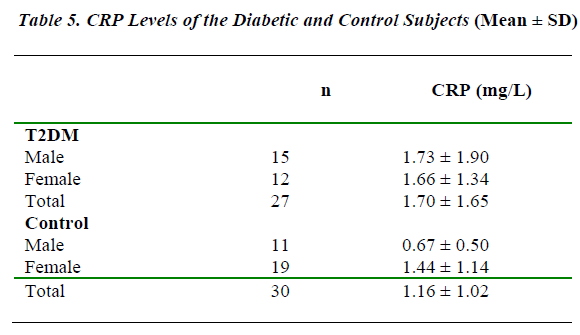 Table 6 shows the CRP values in relation to various vari-ables. In general the values of CRP were higher in dia-betic subjects having these risk factors than the control group subjects having the same risk factors. However the differences were not significant. Similar trend was noticed when CRP was studied in relation to the lipid variables (Table 7). 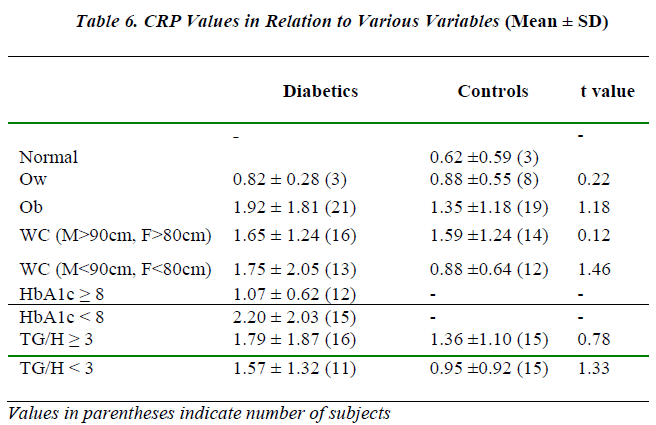 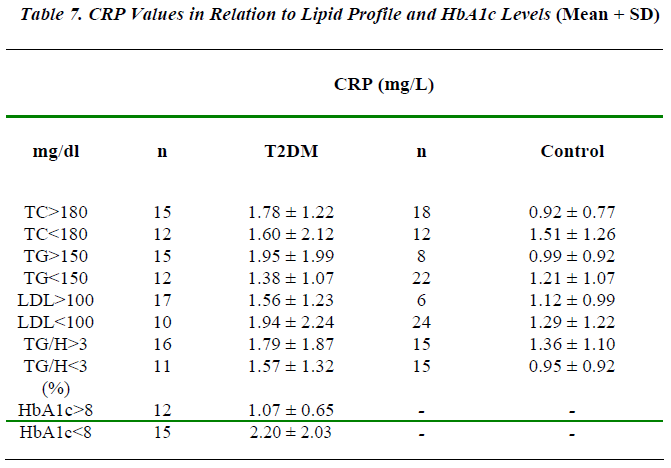 Correlation analysis was done (Table 8) between CRP and variables such as WC, BMI, FBS, TC, TG, LDL and TG/H. 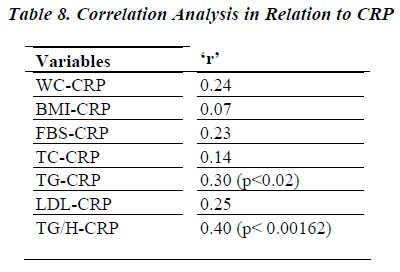 Fibrinogen was another indicator used to assess the atherogenic risk. Table 9 shows the mean fibrinogen val-ues for T2DM and control subjects. The mean levels in the T2DM group were 242.31 mg% as against 296.20 mg% in case of control subjects. No significant correla-tion (Table 10) could be established between fibrinogen and other variables such as waist circumference, BMI and lipid profile. Thus in the present study Fibrinogen levels remained unaltered in relation to a number of variables.

Table 9: Fibrinogen Levels of the Subjects 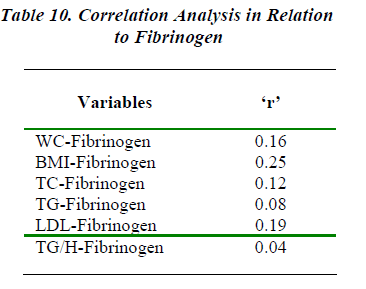 A number of indicators are available to assess the risk of CVD among the diabetics. Two of these which were at-tempted in the present study were fibrinogen and CRP levels. In the present study no significant variations were seen in the values of either fibrinogen or CRP between the healthy normals and stable diabetic subjects. However between the two indicators though the levels of CRP showed no significant increasing trend it correlated with the two traditional markers TG and TG/H.

When the data on CRP levels were segregated based on their cut off risk levels, significant differences were ob-served between control and diabetic group. In the control group 63.3% of the subjects were in low risk (<1mg/L) as compared to only 29.6% in the diabetic group. The odds of high CRP levels (>1mg/L) was higher in diabetic group than control group (OR 33.25, CI 95% 5.4-263.8). This highlights the fact that in order to characterize the risk of cardiovascular events, CRP should be added to the list of screening tests for diabetic subjects. Secondly, high CRP levels may also identify high risk subjects who would be “missed” by just measuring cholesterol and triglyceride levels.

In view of these observations we recommend that the tra-ditional markers be monitored regularly for assessing the CVD risk. Diabetics or healthy population having dyslip-idemia with regard to triglyceridemia (TG>150 mg/dl) &/or having elevated levels of small dense lipoproteins (TG/H>3) may be encouraged to assess CRP levels to monitor the risk of CVD or diabetes. This strategy may help to identify and monitor high risk diabetic subjects for any cardiovascular event thereby reducing the economic burden and improving the quality of life.

There is a need to validate the results on large sample size and on diabetic subjects with coronary heart diseases.

Part of the data forms the dissertation work of Ms Pallavi Desai for her PhD work submitted to The M S University of Baroda, Baroda