Background: Heel prick blood sampling is a painful and stressful procedure performed in NICUs (Neonatal Intensive Care Unit) to collect blood samples for some diagnostic laboratory tests. The local cold is a simple, effective and safe analgesia in newborns. Due to the side effects of pharmacological methods of analgesia and also the relative impact of non-drug methods available, it can be a good alternative for them.

Methods: The current study was a double-blind clinical trial, the infants were born in Imam Khomeini Ahvaz in 2016 and randomly assigned to the case and control groups. In the case group, 20 s after exposure to cold compress on the heels, samples were taken and the control group without exposure to cold compress samples were taken. Pain assessment was performed by CRIES (Pain Scales and Pain Assessment) scale. Data collected by SPSS software version 22 and T-test were analyzed statistically.

Results: The current study was conducted on 68 infants assigned to the case and control groups. Study participants included more boys (60.95%) than girls. All infants enrolled in the current study were 1 d old with Apgar scores of 9-10. In the case group, 90.62% of the subjects had scores<4, and accordingly, 9.37% had scores>4. In the control group, 40.62% of the subjects had scores<4 and 59.37% had >4. There was a statistically significant difference in CRIES score between the groups (P-value<0.001) (according to the CRIES score a total score>4 indicates severe pain). There was no significant difference between the case and control groups in the level of arterial oxygen saturation.

Conclusions: This study showed that local cold can reduce the level of pain caused by heel prick blood sampling and can decrease early and late complications of pain in infants.

Infants admitted to the Neonatal Intensive Care Unit (NICU) experience about 14 painful procedures each day, such as drawing blood samples from the veins, arteries, and heel [4]. Acute pain intensifies stress and causes physiological responses such as difficulty in breathing, changes in arterial blood pressure or pressure in the chest, and vasoconstriction in the vital organs [5,6]. Experimental models indicate that failure to alleviate pain and its associated distress, which can cause tissue damage, results in pain disorders, a low pain threshold, increased response to painful procedures, and finally chronic pain later in life [7-9].

Heel prick blood sampling is a painful and stressful procedure performed in NICUs to collect blood samples for some diagnostic laboratory tests [10]. Response to pain following blood drainage from the plantar forefoot is greater in infants [11].

The Canadian Paediatric Society and the American Academy of Paediatrics recommend NICUs to have a specific program of pain management for infants [12]. Effective pharmacological and non-pharmacological methods are available to control pain, which can be administered singly or in combination [13].

Local cold can reduce pain by inhibiting sensory receptors and reducing conduction time and synaptic activity in the peripheral nerve [21]. Saeki revealed a significant association between the reduction in skin conductance levels, reduced blood flow, and local cold, which can inhibit damaging stimuli at the spinal level [22].

The current study aimed to evaluate the effectiveness of local cold on reducing the severity of pain caused by heel prick blood sampling.

The current study was a double-blind clinical trial (registration no. IRCT2016081329336N1). Sixty-eight new born term infants admitted to the NICU in Imam Khomeini Hospital in Ahvaz, Iran, were enrolled in the study. All parents signed written consent for participation of their infants in the study and control of their blood glucose.

One-day-old newborns with a gestational age ≥ 37 weeks who were normally delivered and had Apgar scores>8, weight ≥ 2500 g, and >95% arterial oxygen saturation, had not received sedatives for 6-8 h prior to the procedure, and had no respiratory distress were enrolled into the study.

Infants from whom a blood sample could not be obtained the first time and infants who had hypoglycaemia (blood glucose<47 mg/dL) were excluded from the study.

Infants were assigned to two groups based on a computer-generated random numbers table. Infants were enrolled into the study one hour after feeding when they were alert and calm with a dry diaper.

The infant’s Achilles tendon and ankle were fixed with thumb and fingers, respectively [23]. Heel prick samples were drawn by a trained nurse using a sterile lancet.

Then, the infant’s response was assessed, based on the CRIES tool, by a trained nurse who was unaware of the nature of the study, and the results were recorded. The CRIES parameters were also recorded for all participants before the intervention.

To compare quantitative and qualitative variables between the groups, the t-test and Chi-square test were used.

Intervening variables were evaluated by analysis of covariance; all analyses were conducted by SPSS version 22. P<0.05 was considered as the level of significance.

In the current study, 2 subjects from the control group and 2 subjects from the case group were excluded from the study because of failure to obtain a blood sample the first time, according to the exclusion criteria.Analysis of demographic characteristics showed that the study participants included more boys (60.95%) than girls.

All infants enrolled in the current study were 1 d old with Apgar scores of 9-10.

There was no significant difference between the groups regarding the above-mentioned variables (Table 2).

Means of CRIES score variables were significantly lower in the case group (Table 3).

Table 3: Comparison between means of variables of the case and control groups.

There was no significant difference between the case and control groups in the level of arterial oxygen saturation.

There was statistically significant difference in CRIES score between the groups (P-value<0.001) (Table 1 and Figure 1). 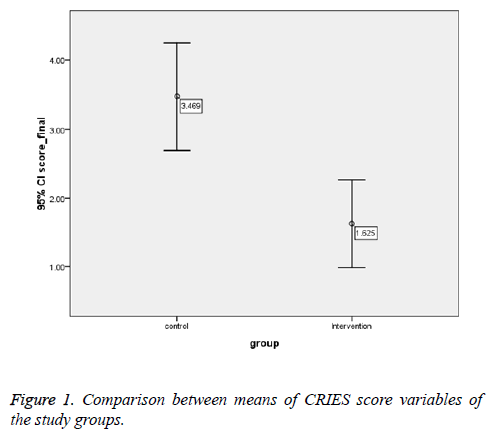 Figure 1: Comparison between means of CRIES score variables of the study groups.

The current study was conducted on 68 infants assigned to the case and control groups. The mean of the CRIES score in the control and case groups was 3.469 and 1.625, respectively, and this difference was statistically significant (P-value<0.001). Many studies have evaluated methods to reduce pain in infants; some methods were excluded because of their high rate of side effects, such as using analgesic and narcotic drugs, or because they were not useful for routine procedures on infants such as venous/arterial blood sampling, subcutaneous injections, and heel prick blood sampling. Giving 30% oral sucrose, swaddling, skin to skin contact, and non-nutritive sucking are common methods used to reduce infant’s pain.

Slater et al. reported that although administration of sucrose before heel prick blood sampling reduced the Premature Infant Pain Profile (PIPP) score in infants in the case group compared to the control group, it had no effect on reducing the severity or response to pain (P=0.4) [24].

Saeki evaluated the performance of the autonomic nervous system, skin conductance level, and blood flow after painful stimulation with a needle in children before and after local application of cold. They indicated a significant association of reduced skin conductance and lower blood flow with local cold application, in other words, local cold inhibits damaging stimuli at the spinal level [22].

Application of local cold can prevent early and late complications of pain and the impact of pain on the neurodevelopmental evolution of infants by inhibiting damaging stimuli at the spinal level and directing them to the cerebral cortex [3].

Kiran et al. evaluated the effect of cold compression on the level of pain caused by venous blood sampling on 50 children aged 3-7 y old in India. They reported a significant difference in the severity of pain between the control and case groups [21].

Bastami et al. also evaluated the effect of cold compression on the level of pain caused by arterial blood sampling on 61 subjects in Iran. They found a significant difference between the control and case groups in the pain score, which is consistent with the results of the current study [25].

Local cold can reduce the level of pain caused by heel prick blood sampling and can decrease early and late complications of pain in infants.

The authors thank the research deputy of Jundishapur University of Medical Sciences for the financial support. The authors also wish to thanks the personals of nursery of Ahvaz Imam Hospital for their assistance.