Several studies have attempted to identify risk factors associated with seizure [3]. Febrile seizure is generated from genetic and environmental factors [4]. Presence of a positive family history in first- and second-degree family members is the most important identified risk factor for febrile seizure [5]. It has been demonstrated that one fourth of patients with febrile seizure had a positive family history [6]. Male gender, low birth weight, breast- feeding duration, high body temperature, high blood bilirubin or neonates whose mothers consume alcohol and smoke cigarettes are ascribed to other causative factors of febrile seizure [7]. Also, bacterial and viral infections are considered as significant factors [5].

Many circadian rhythms such as sleep, behaviour, metabolism, and hormone secretion are being regulated with changes in exposure to light [8]. Melatonin is secreted mostly at night and in the dark, and exposure to light reduces its secretion [9]. Some studies have suggested an association between the occurrence of febrile seizures and melatonin [10,11]. According to some studies, melatonin seems to possess some anti-seizure effects [12,13].

In this study, we aimed to determine demographic features and causative factors for febrile seizure in Children’s Medical Center (Tehran, Iran) to prepare an answer for conflicting opinions about causative factors of febrile seizure regarding geographical and seasonal variation. We evaluated this case in Iran which helps the health care provider in better diagnosis and selecting better treatment.

This cross-sectional study was done on 344 children with 6 month to 6 year-old who were diagnosed with febrile seizure, and admitted to Children’s Medical Center (Tehran, Iran) from February 2013 to February 2015.

Written informed consent from all parents was obtained for inclusion in the study. All children with a seizure due to reasons such as comorbidity with chronic diseases, electrolyte imbalance, past medical history of seizure or central nervous system infections were excluded from our study.

Hospital admission time was recorded, and the time the febrile seizure occurred was asked of the parents upon their arrival at the hospital. Patients’ body temperature was measured upon their arrival at the hospital. Patient’s data including age, gender, seizure subtypes such as focal, seizure types (simple or complex), time of seizure occurrence, a duration of more than 15 minutes, and usage of diazepam, month and season of seizure, family history of disease, infectious causes of fever were recorded in specific self-formatted questionnaires. When a febrile seizure was either focal or prolonged (>15 minutes), or if more than one seizure had occurred within a 24 hour period, it was considered complex.

The study was carried out in accordance with the Declaration of Helsinki, the ethics committee of the Tehran University of Medical Sciences approved the protocols of the study, and the parents provided written, informed consent. 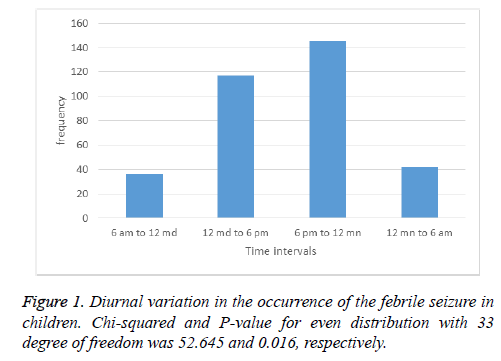 Figure 1: Diurnal variation in the occurrence of the febrile seizure in children. Chi-squared and P-value for even distribution with 33 degree of freedom was 52.645 and 0.016, respectively. 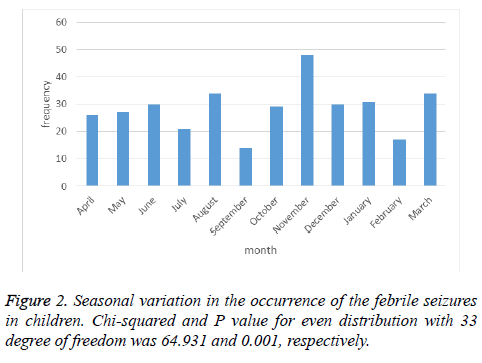 Figure 2: Seasonal variation in the occurrence of the febrile seizures in children. Chi-squared and P value for even distribution with 33 degree of freedom was 64.931 and 0.001, respectively. 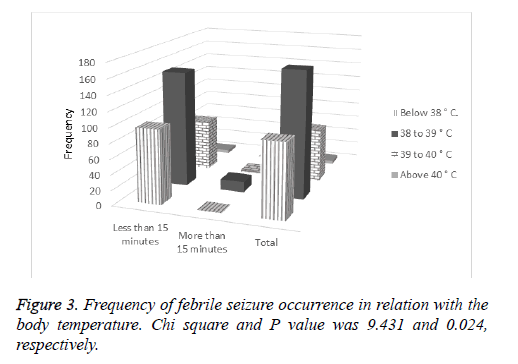 Figure 3: Frequency of febrile seizure occurrence in relation with the body temperature. Chi square and P value was 9.431 and 0.024, respectively.

In conclusion, the occurrence of febrile seizure depends on diurnal and seasonal variation. Also, the body temperature and history of family with febrile seizure are significant factors for diagnosis.