Assessment of biochemical parameters after exposure to ultrasound waves; an in vivo study

Introduction: The main aim of this study was to determine the effects of ultrasonic waves on serum levels of lactate dehydrogenase, aspartate transaminase, alanine transaminase, creatine phosphokinase and alkaline phosphatase in male rats. Normally, Serum level of LDH, AST, ALT, CK and ALP enzymes are influenced by environmental factors. These enzymes commonly measured as biomarkers for life health.

Results: The results indicated that serum level of ALT and LDH has a significant decrease. No differences were seen in the level of the serum of AST, ALP and CK enzymes in both the 1 h/day and 6 h/day of exposure group. And also serum level of ALT that has exposed 1 h/day comparing to control group didn’t have significant changes.

Conclusion: Exposure to ultrasonic waves may lead to side effects. These effects can be therapeutic effects for a range of patients and can also be very deadly for a group of patients with unbalanced serum levels of special enzymes.

Ultrasound waves have frequencies above 20000 cycles per s. The ultrasound waves used in electronic, navigational, industrial and security applications [1]. It is also used in medicine to view internal organs of the body. The aim of study was to determine ultrasound waves impacts on some important health factors. First enzyme in clinical assessment was Aspartate Transaminase (AST), or Serum Glutamic Oxaloacetic Transaminase (SGOT) [EC number: 2.6.1.1], which known as a pyridoxal phosphate PLP-dependent transaminase enzyme [2]. AST catalyses the transfer of the α- amino group between aspartate and glutamate and, play an important role in amino acid metabolism [3]. AST is found in the heart, skeletal muscles, kidneys, liver, brain, and red blood cells [4]. The second evaluated candidate, was Alanine Transaminase (ALT) also known as Serum Glutamate-Pyruvate Transaminase (SGPT) [EC number: 2.6.1.2] found in the liver and also rarely in plasma and in various body tissues [5-6]. It catalyses the two parts of the alanine cycle. Serum ALT level, serum AST level, and their ratio (AST/ALT ratio) have long been considered a useful clinical marker of liver health. The tests are part of blood panels [7]. The amount of AST in the blood is directly related to the extent of the tissue damage. Typically elevated levels of liver enzymes in general signify some form of liver (or hepatic) damage or injury [8]. The next important factor was Creatine Phosphokinase (CPK or CK) [EC number: 2.7.3.2] which found mainly in the heart, brain, and skeletal muscle. CK catalyses the conversion of creatine and utilizes adenosine triphosphate (ATP) to create phosphocreatine and adenosine diphosphate (ADP) [9]. Different forms of Creatine phosphokinase found in the muscles, heart and other organs. Creatine phosphokinase-MB (CPK-MB) is the most sensitive and the most specific indicator available for the diagnosis of an acute myocardial infarction and was another assessed enzyme in this study [10]. Alkaline phosphatase (ALP) [EC number: 3.1.3.1] is a hydrolase enzyme responsible for removing phosphate groups from many types of molecules [11]. This enzyme plays a considerable role in growth and development of bones and teeth [12]. It is also active in many other tissues, particularly in the liver and kidneys [13]. Lactate Dehydrogenase [EC number: 1.1.1.27] catalyses the reversible conversion of lactate to pyruvic acid, as it converts NAD+ to NADH [14]. Usually LDH-2 is the predominant form in the serum. All types of LDH are commonly measured clinically as biomarkers for intravascular haemolysis, pulmonary hypertension, and death in patients with sickle cell disease [15]. This enzyme has been linked directly to hypophosphatasia, a disorder that is characterized by hypercalcemia and includes skeletal defects [16]. In addition, LDH is an enzyme detectable in serum that is often elevated in multiple cancers including renal cell carcinoma [17]. Studies have shown that ultrasonic waves (20,000 Hz) can affect serum levels of enzymes [18-23]. Most of the studies documented that, noise significantly increased the likelihood of hypertension [18]. Same research indicated increasing plasma cortisol level in rat and fish [19,20]. Other studies have shown that the rates of apoptosis and necrosis of the testicular cells were increased in which suffers from noise pollution [21]. It is believed that noise exposure induce oxidative stress in rat and can be affected on inducing brain neurotransmitters [22,23]. Ultrasonic exposures significantly increase lipid peroxidation and antioxidant serum activity, paraoxonase activity and serum total antioxidant capacity in rat [24]. Recent study has shown that exposure to noise decrease testicular weight [25]. The other research findings show significant decrease in liver weight and liver/body weight ratio in noise exposed groups [26]. Researcher’s results indicated that sperm viability, motility, and total antioxidant capacity in phone waves exposure groups decreased significantly [27]. Same research shows that serum level of testosterone increased in rats exposed to noise pollution [28]. Viewpoints about severity of harmfulness of these waves are controversy.

However extensive researches had been done on various dimensions of ultrasonic waves, but comparatively little attention has been paid to the impacts of ultrasonic waves on serum levels of liver and heart enzymes in animals or human. The lack of adequate and comprehensive knowledge about the clinical effects of ultrasound, despite the long history of its discovery and widespread use of that, was the aim of this project. We wanted to know who should not be in exposed with ultrasound waves. We have also evaluated the effect of ultrasound waves on levels of lactate dehydrogenase, aspartate transaminase, alanine transferase, ceratine kinase and alkaline phosphatase enzymes in serum.

The present study presents some side effects of waves on health factors using spectrophotometer. In general, this study may open up a new avenue for treatment of diseases or in preventing impairment to human health.

In this study research was carried out on 21 male adult wistar rats with a weight of 190 ± 10 g which were purchased and raised in our colony from an original stock of University of Medical Sciences, Hamedan branch (Hamedan, Iran). The average weight of each cage was kept in a same weight and eliminated weight factor. The temperature was at 22 ± 2°C and animals were kept under the condition of 12 h of light and 12 h of darkness (light on at 08:00 am) and free access to water and standard laboratory chow. Recommendations from the Ethical Committee of University of Medical Sciences, Hamedan were implemented regarding research conducted on the animals.

In this study, the 20 kHz frequency represented ultrasonic waves. Frequencies of 18-22 kHz represented as ultrasonic waves. Male wistar rats were randomly assigned to 3 groups of 7 rats in each group according to the study design below. Group 1, comprised the control group maintained under experimental conditions, without any exposure to waves. Two groups were exposed to ultrasonic waves for 1 and 6 h per day in 8 weeks. During the experiment the animals were healthy and were repeatedly screened. Ultrasonic wave’s emitter devices were placed on top of the animal’s cages. After 8 weeks, blood samples were obtained using Cardiac Puncture method. Following serum preparation, LDH, CK, AST, ALT and ALP Levels were quantitated using standard automated spectrophotometer especially photometric kinetic methods according to the German Biochemical Society (Beckman DU-6, Fuller-ton, CA). Among other methods such as Immunoassay and ELISA, etc. this method is preferable. All the other chemicals were analytical reagent grade.

All values are presented as mean ± SEM. Statistical significance were evaluated by one-way analysis of variance (ANOVA, t-test) using SPSS 19. Differences with P<0.05 were considered significant. Data normalization of serum levels of enzymes was normal.

Table 2: Serum level of Alanine Transaminase (ALT). Comparison of the serum levels of ALT in control and exposure groups (one-way ANOVA and Turkey). 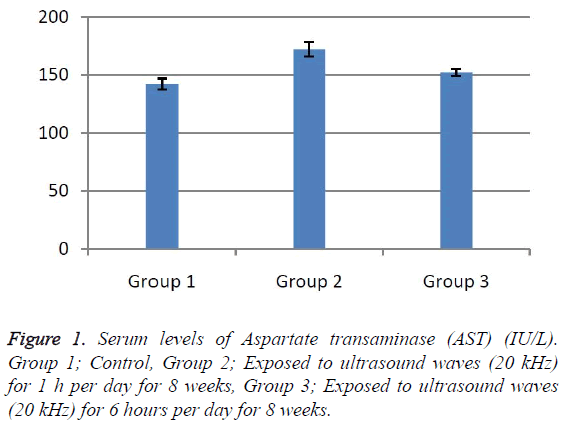 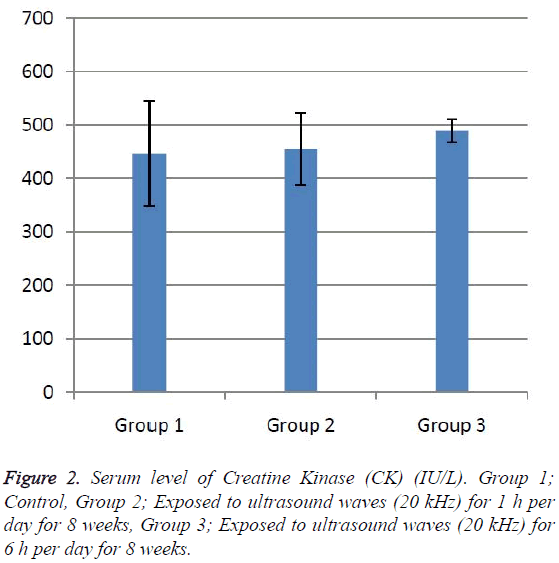 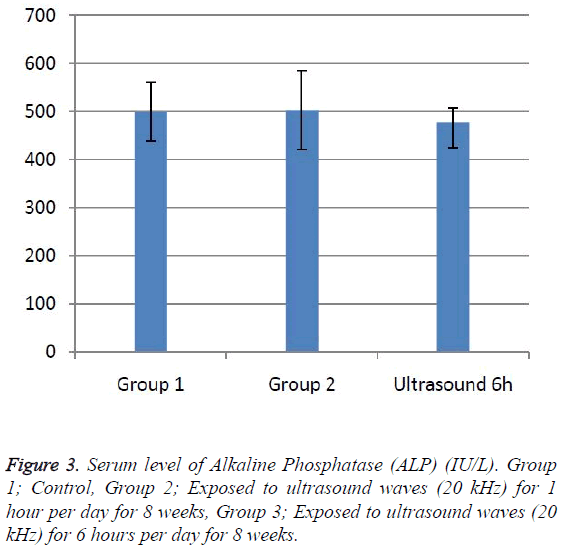 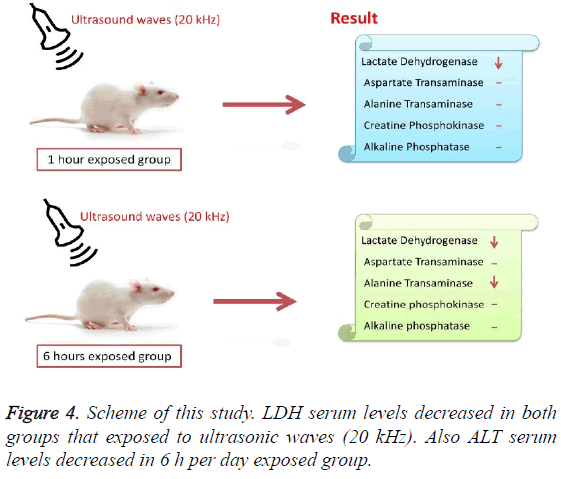 The present research indicated that ultrasound waves didn’t have any significant effect on serum levels of AST, ALP and CK in both the 1 and 6 h exposed per day groups. And also serum levels of ALT didn’t have significant changes in the groups of 1 h/day exposure. But average concentration of ALT in the 6 h/day group has had a significant decrease comparing with the control group. Most of studies documented that waves can reduce serum levels of ALT and AST which are considered in this result; on the other hand, researchers prove that voice with high frequency can increase liver enzymes [29-32]. Several groups have shown electromagnetic noise reduce albumin and creatine phosphokinase serum levels [29,31]. ALP is a membrane-bound glycoprotein therefore, it would make sense that, this glycoprotein does not expose properly to ultrasound waves in the intestine, kidney, liver and placenta tissues [33]. Based on the results, ultrasound does not have harmful effects on patients with skeletal defects. It has same damages to the sarcolemma, lead to releasing CK into the extracellular space [34]. Serum level of CK didn’t have significant change, which may be due to the low intensity of ultrasound waves and could not affect sarcolemma. It seems that, contacting with ultrasonic imaging devices is safe for patients with myocardial infarction. Based on these results, less exposure probably did not affect the 1 h/day group in serum levels of alanine aminotransferase comparing with the 6 h/day group. Liver activity changes lead to releasing ALT into the blood plasma [29,34]. Thus, decreasing of ALT serum level indicated that activity of the liver decreased. Ultrasound waves probably reduce liver activity and resulting in decrease in ALT serum level. Ultrasound waves would be very useful for cirrhosis, hepatitis caused by alcohol, drugs and viruses. LDH is a soluble cytoplasmic enzyme that is presented in almost cells and is released into extracellular space when the plasma membrane is damaged [35]. We haven’t seen an increase in serum level of LDH. Thus, ultrasound does not affect plasma membrane. Low levels can be caused by genetic mutations [36]. The outcomes of our research proposed that exposure to ultrasound waves maybe lead to gene mutation and decrease of LDH and ALT serum levels.

These results revealed that long term exposure to ultrasound waves has excitatory effects on serum level of ALT and LDH in male rats. In addition, the weight of all groups within 8 weeks has followed the normal pattern. So the conclusion would be that reducing serum level of ALT and LDH is not due to abnormal weight gain. Since these enzymes play pivotal roles in many organs and tissues, changes in serum levels of that, maybe have serious side effects in organism. It also can be concluded that ultrasound imposes partly side effects on organs and tissues due to its effects on serum ALT and LDH levels. Patients with renal damage, haemolysis in sickle cell diseases, pulmonary hypertension and renal cancer shouldn’t expose to ultrasonic waves.

This research has been done with the support of Baqiyatallah University of Medical Sciences, Tehran, Iran and Islamic Azad University, Hamedan Branch, Hamedan, Iran. We appreciate all who helped us to exert the present study specially Dr. Rahim Ahmadi for his valuable guidelines.