Transmissible spongiform encephalopathy’s caused by infectious agents is characterized as genetic or sporadic disorder. ASP178ASN (D178N) mutation as a genetic factor is well documented. The computational method was employed to look into the changes at atomic level, where disease associated prediction was followed by 50 nano second (ns) simulation under GROMOS96 43a1 force field at 300 K temperature. All the four servers used in this study predicted the D178N mutation to be highly deleterious. The simulations showed a considerable change in β-Sheet leading to change in intermolecular interactions and conformational rearrangements. These factors possibly contribute to pathogenic nature of D178N mutant prion.

Prion protein (PrP) is 253 aa long protein encoded by short (p) arm of chromosome 20 and is associated with human prion (HuPrP) diseases. The HuPrP diseases also known as Transmissible Spongiform Encephalopathy (TSE) has infectious, genetic and sporadic nature and is categorized into nine different disease variants, these diseases are attributed to the change of cellular PrP (PrPC) to its misfolded form known as scrapie PrP (PrPsc). The PrPsc is known to have more beta sheet and lesser alpha helix content than PrPC. PrPsc form aggregates that accumulate in the brain and ultimately leading to the pathogenesis of HuPrP diseases [1-3]. Five of the nine disease variants of TSE have genetic origin, where a mutation in PrP is playing a role in the etiology of TSE [2,4-8]. Asp178Asn (D178N) mutation mediated by polymorphism at residue 129 in PrP gene is a predominate factor in the etiology of TSE [9-11].

The PrPsc created by this mutation lead to TSE which is in accordance with “protein-only” hypothesis and its transmission does not require genome and propagates by binding of PrPsc with cellular prion protein and catalysing its conversion to the PrPSc state [12,13]. The molecular etiology of this transformation is poorly understood. However biophysical approaches are being employed in plethora to understand this transformation [14]. In this study we are studying the effect of D178N mutation on the transition of PrPC to PrPsc using atomic simulation. The Atomic insight into the protein architecture has been used to reveal the effect of the mutations [15,16] (Table 1).

Gromacs 4.5.6 package [23] was employed for molecular dynamics simulations (MDS) of WT and MU prion structures for 50 nano second (ns) under GROMOS96 43a1 force field in the NPT ensemble. SPC water model [24] was placed in cubic box of 1 Aº; the box was neutralized with Na+ and Cl− ions. Both the systems were heated to 300 K followed by equilibration with NVT for 1 ns at a constant temperature of 300 K. After this step another 1 ns equilibration was performed with NPT-MD. The trajectories generated were subjected to Root mean Square Deviation (RMSD), Root Mean Square Fluctuation (RMSF), Radius of gyration (Rg) and Solvent Accessibility Surface Area (SASA) by using inbuilt gromacs tools. g-h bond was used to calculate number of distinct hydrogen bonds formed by specific residues to other amino acids within the protein during the simulation (NH bond).

Gromacs 4.5.6 inbuilt tools g-covar and g-anaeig were used for performing Principal Component Analysis (PCA). PCA was used to extract the principal modes involved in the motions of WT and MU prion protein. The Prion protein regions which are accountable for the most significant collective motions can be acknowledged using this analysis.

Pymol [25], VMD [26] and Discovery studio visualizer [27] were used for visualization. All the plots were plotted using XMGRACE [28].

Prion protein ranging from 125-227 amino-acid was subjected to SPDB viewer to look for missing amino acids and energy minimization. The psi-phi distribution shows the acceptability of the overall structure, Figure 1 shows the residues inside and outside the acceptable region and the contour colour represent the hard-sphere and overlap. In both the structures 98% of the residues fall under the permissible region. These structures after 50 ns simulation under GROMOS96 43a1 force field showed stable root mean square deviation at 300 K temperature, both the structure are showing no abnormal variation as shown in Figure 2. Figure 3 shows the picturesque representation of 50 ns run, where each structure is retrieved after 10 ns interval. g-rmsf tool of gromacs was used to compute the root mean square fluctuation (RMSF, i.e. standard deviation) of atomic positions in the trajectories of both wild type and mutant form of prion. The RMSF of the two structures shows the mutant prion structure more fluctuating than wild type as shown in Figure 4a. The fluctuations when subjected onto the average structures of the two simulations and the results are shown in Figure 4b (blue representing the most stable and red most fluctuating). The change in the fluctuation can be because of the decrease in intra-protein hydrogen bond pattern (Figure 5). g-h bond tool was used to compute and analyses hydrogen bonds, hydrogen bonds were determined based on cut-offs for the angle Hydrogen-Donor- Acceptor and the distance Donor-Acceptor. OH and NH groups were regarded as donors, O and N as acceptor by default. Here the calculation was done using a grid of 19x19x19 Aº and the cut off value for hydrogen bond calculation was set at 0.35 Aº. Wild type formed 89 average number of intra-hydrogen bonds per frame, while mutant formed 84 intra-hydrogen bonds per frame. This decrease in number of hydrogen bond in mutant prion is a factor that governs the change in fluctuation, as observed earlier. 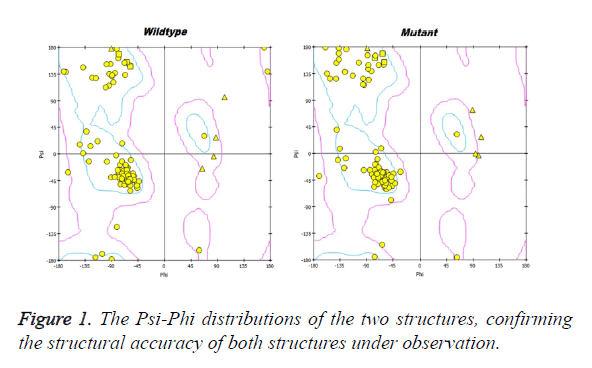 Figure 1. The Psi-Phi distributions of the two structures, confirming the structural accuracy of both structures under observation. 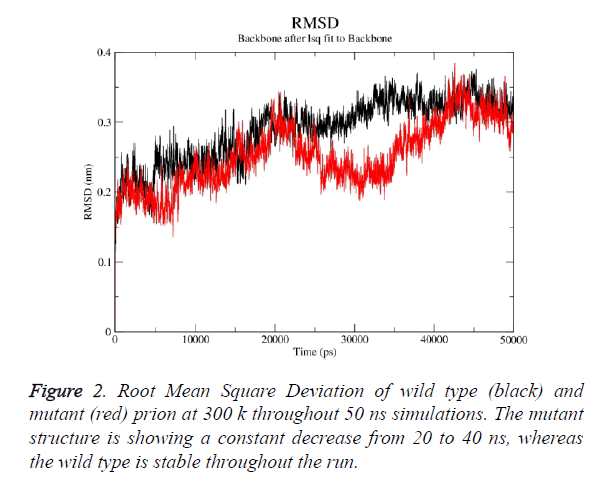 Figure 2. Root Mean Square Deviation of wild type (black) and mutant (red) prion at 300 k throughout 50 ns simulations. The mutant structure is showing a constant decrease from 20 to 40 ns, whereas the wild type is stable throughout the run.

Figure 3. Pictorial representation of wild type and mutant prion over time at constant temperature and pressure, each picture retrieved after 10 ns interval. 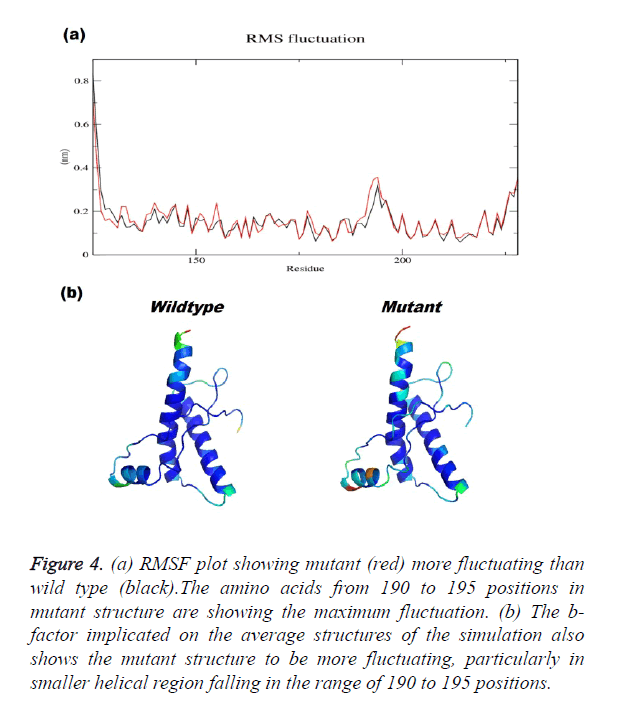 Figure 4. (a) RMSF plot showing mutant (red) more fluctuating than wild type (black).The amino acids from 190 to 195 positions in mutant structure are showing the maximum fluctuation. (b) The b-factor implicated on the average structures of the simulation also shows the mutant structure to be more fluctuating, particularly in smaller helical region falling in the range of 190 to 195 positions. 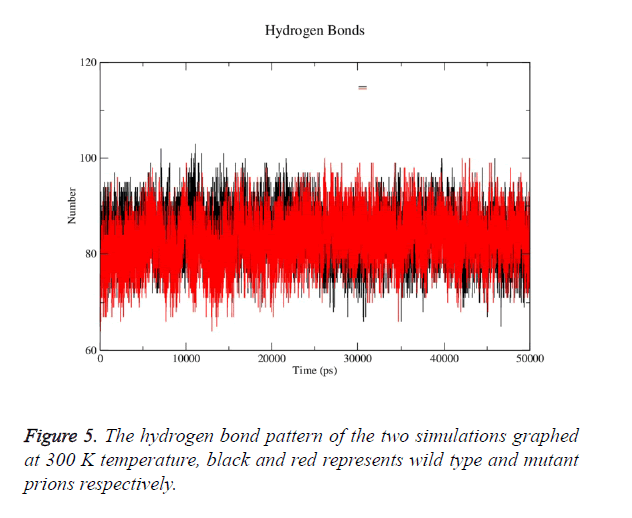 g-sas tool of GROMACS was used to computes hydrophobic, hydrophilic and total Solvent Accessible Surface Area (SASA) of the prion protein variants over time (Figure 6a). The mutant structure has lesser SASA which correlates with its lesser radius of gyration Rg in mutant structure (Figure 6b). g-gyrate tool was used to compute the Rg of a molecule as a function of time. The wild type SASA values fall in the range of 29- 37.5 nm2 and its average over time at 300 K was 33.7 nm2, in mutant the range was 30-36.3 nm2 and its average SASA over run at 32.4 nm2. More than 60% of the difference in SASA is observed in hydrophobic area of prion. 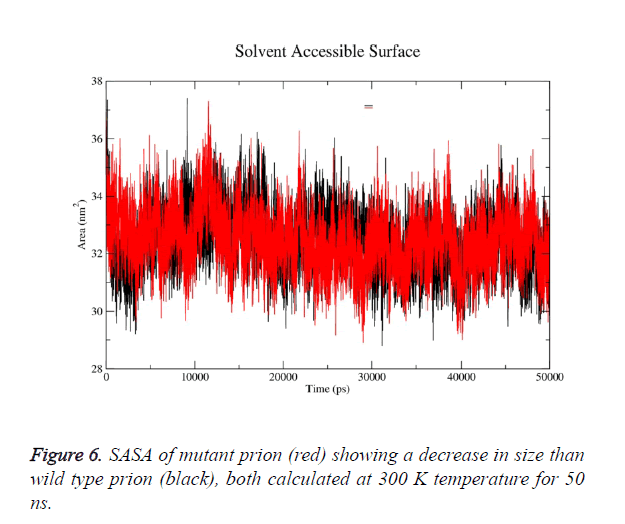 Figure 6. SASA of mutant prion (red) showing a decrease in size than wild type prion (black), both calculated at 300 K temperature for 50 ns. 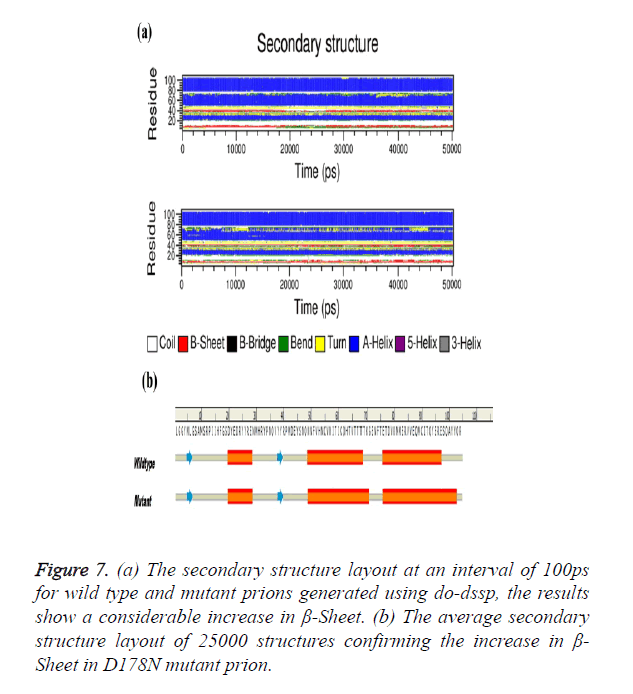 g-anaeig and g-covar tools were used for PCA. g-anaeig analyses eigenvectors. The eigenvector is derived from covariance matrix. g-covar calculates and diagonalizes the (mass-weighted) covariance matrix. When a trajectory is projected on eigenvectors, all structures are fitted to the structure in the eigenvector file, if present, otherwise to the structure in the structure file. The impact of overall motion of protein was analysed by principal component analysis (PCA) by construction of eigenvectors. For comparing the overall motion in conformational space, PCA plot of the two structures was plotted. In case of complexes, the covariance trace values of wild type and mutant structures were 15 and 13 nm2 respectively. The PCA plot of wild type complex showed the expanded clusters in conformational space. The PCA plot of mutant showed less change in overall motion with clusters decreased in conformational space compared to wild type. Overall, the PCA plot of two structures confirmed the less change in protein motion and clusters decreased compared to wild type complex is due to mutation.

Our study has performed molecular dynamics simulations of a segment (residues 125-228) from HuPrP and its ASP178ASN mutant. The prion protein is prone to structural instability and mutations play an important role in this regard. The mutations lead to instability and conformational plasticity and promote its conversion to intermediate states close to the harmful PrPsc. The structural rearrangement monitored at atomic level as time interval properties has given a detailed insight into the anomalies. These anomalies might act as molecular switch, triggering the conversion of PrPC to PrPsc. The results also show a considerable change in the β-sheet content that can be the leader of the conformational changes and disease-related conversions.