Ascites in Ibadan, Nigeria- usefulness of albumin gradient in its etiologic diagnosis

Ascites is a common sign worldwide including tropical Af-rica where the underlying diseases are responsible for Considerable morbidity and mortality. It results when the balance between fluid formation and absorption in the peritoneal cavity is upset. The pattern of ascites has been well described in Western Europe and North America [1,2].

In these regions, intra-abdominal malignancy and liver cirrhosis (LC) are major causes of ascites. As far as we know, no such recent study exists that exclusively addresses this problem in a hospital population in Nigeria. The fact that a large number of patients with ascites have diseases that may be curable has highlighted the importance of determining the etiologic diagnosis of these conditions. However, the differential diagnosis of ascites remains a clinical problem. For instance, cytological investigation, despite its high specificity, has been found to be unreliable in many cases due to high percentage of false negative results [3]. Furthermore, an earlier approach used in the differential diagnosis consisted of separating ascitic fluid (AF) based on the concentration of protein, defining fluid with protein level lower than 2.5 or 3.0 g/dL as transudate (usually caused by liver cirrhosis) and those with higher protein as exudate (usually of neoplastic, tuberculous or other inflammatory etiology). Yet, high protein ascites has been reported in up to 25% of patients with uncomplicated liver cirrhosis [4,5]. Other parameters such as AF lactic dehydrogenase (LDH), has been investigated but a complete separation between cirrhotic ascites and tuberculous or malignant ascites (MA) has not been achieved [6].

Serum-ascites albumin gradient (SAAG) is defined as the difference between serum and AF albumin concentrations. It is a parameter reflecting the oncotic pressure gradient between portal capillaries and peritoneal cavity [7]. The test has been performed in a number of studies in Caucasians and Asians (8, 9) demonstrating a lower value for patients with malignant neoplasms and tuberculous peritonitis (TBP) compared with LC group. This biochemical parameter is simple and could be routinely performed in developing countries where ascites is common. However, the diagnos-tic value of the SAAG has not been evaluated in an African population up until now. The present study was, therefore, undertaken to (i) evaluate the reliability of SAAG in etiologic diagnosis of ascites in Ibadan, and (ii) to determine prospectively the causes of ascites in this environment.

All adult patients with ascites admitted to the University College Hospital, Ibadan within a 2-year-period whose etiologic diagnoses had not been known were prospectively studied. The protocol was approved by the hospital’s ethical committee and an informed consent was obtained from the patients.

On entry, detailed history and clinical examination were conducted. Ascites was confirmed by aspiration of peritoneal fluid. Patients were excluded from the study if they had dry tap after clinical evidence of ascites. Primary liver cancer (PLC) was excluded in clinically suspected PLC or LC by ultrasound, computed tomography, and in some by biopsy or at autopsy. The exclusion of patients with hepatic malignancy was necessary because of the recognized overlap between malignancy and LC in 80% of cases in this environment [10]. Also excluded were ascitic patients with suspected LC, TBP or MA but with normal histology of the liver or peritoneum after biopsy or at autopsy.

Only patients with suspected non-hepatic malignancies and TBP after clinical examination had peritoneal biopsy. These patients had gastrointestinal tract endoscopy with biopsy or barium studies and in some biopsy of the intestines at autopsy. On the other hand, chest X-rays and sputum examination for acid fast bacillus were conducted on all patients suspected of having TBP based on history and clinical examination. Other relevant organs of suspected pri-mary site of lesion were also biopsied ante- or post-mortem.

Endomyocardial fibrosis was diagnosed clinically and/or by echocardiography or at autopsy. Rheumatic heart disease was diagnosed on ascitic patients with heart failure who previously satisfied Jone’s criteria for rheumatic fever. Ne-hrotic syndrome was diagnosed based on the presence of generalized edema, hypo-albuminemia, and massive prote-inuria.

All patients had simultaneous samples of blood and AF taken. Serum was immediately separated after centrifugation at 3000 rpm for 20 minutes at 4°C and stored at 20°C until analysis. Under aseptic condition, paracentesis ab-dominis was performed. It was done under local anesthesia by insertion of a 21-gauge needle in either iliac fossa after emptying the bladder. Only 50 mL of AF was required for diagnostic purposes. Ten ml of AF was injected into aero-bic and anaerobic blood culture bottles. The AF was also cultured for Mycobacterium tuberculosis and fungus in specialized media. For all patients, albumin, total protein and LDH in serum and AF were determined by bromocresol green, biuret, and modified Wroblewski methods as described by Varley [11]. Cytology was performed on Papanicolaou and Giemsa- stained smears made from the sediment of centrifuged AF within 2 hr of aspiration of the AF.

The results are given as mean + standard deviation, range, in addition to 95% confidence interval. For statistical analysis, Student’s t-test was used. A “p” value <0.05 was considered significant. The data of the patients were used to determine the most suitable discriminating concentrations of the various biochemical parameters. These were calcu-lated according to standard methods [12]. Applying these limits to the patients permitted classification into four categories: true positive (a); false positive (b); false negative(c); and true negative (d). Sensitivity was calculated as [a/a+c]x100, specificity as [d/d+b]x100, positive predic-tive value as [a/a+b]x100, negative predictive value as [d/d+c]x100, and efficiency as [a+d/a+b+c+d]x100.

Nine (11%) of the patients had ascites due to other causes: endomyocardial fibrosis 3, rheumatic heart disease 2, and nephrotic syndrome associated with chronic glomerulo-nephritis (5%). None of the patients had fungal or non-tuberculous bacterial peritonitis. 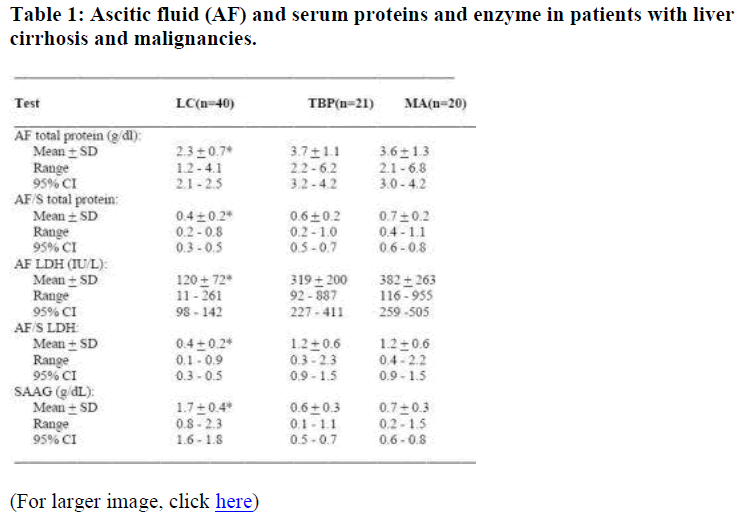 Table 1: Ascitic fluid (AF) and serum proteins and enzyme in patients with liver cirrhosis and malignancies.

The distributions of the AF total protein and SAAG in pa-tients with LC, TBP, and MA revealed unlike AF total pro-tein, the SAAG showed near perfect discrimination between LC and TBP/MA. The efficiency of the criteria [12] in correctly diagnosing patients with ascites caused by LC and those due to TBP or malignancies was 96% for A-GRAD <1.1 g/dL followed by AF LDH level >180 IU/L 77%, AF total protein >3.0 g/dl 73%, AF to serum LDH level ratio >0.6, 70% and AF to serum total protein level ratio >0.5, 63% as shown in Table 2. The number of patients with ascites due to heart or renal diseases was too small for any statistical analysis.

We have shown the common causes of ascites in our study population are LC, followed by TBP and malignancies. Similar observations had been made in Africa and Asian Countries [13-16]. On the other hand, the major causes of ascites are intra-abdominal malignancy and LC in Western countries [2,3]. Tuberculous peritonitis is uncommon in these countries and when it occurs it is usually found in Blacks, Asians and Haitians [17]. The common factors at-tributable to these include poverty, over-crowding, malnu-trition, and recently human immune deficiency virus infec-tion [2]. However, it is important to note that there is a limitation to such studies in general. Statistics derived from hospital figures are biased and are only an approximate guide to the incidence of disease in a community. Many individuals, particularly in developing countries such as Nigeria, do not attend hospitals at all. What is seen in hospitals may represent only the tip of iceberg. The present data must be interpreted in the knowledge of the defects inherent in such studies. Nevertheless, the present data may help to determine the most prevalent causes of ascites faced by the local physician in our community.

The results also demonstrate that SAAG offers an excellent discrimination of the causes of ascites. Of the 5 diagnostic parameters tested, it showed the best combination of results for the predictive value of a positive test (the proportion of patients with positive tests who had TBP/MA) and the pre-dictive value of a negative test (the proportion of patients with negative tests who did not have TBP/MA). Furthermore, the sensitivity and specificity of the SAAG in differ-entiating LC from TBP/MA were superior to all the other 4 parameters, similar to others observation [16,18,19].

The potential value of using SAAG is of particular interest, as this method has not been previously used in our envi-ronment. In deed, 39 of 40 patients with LC showed an increased SAAG while all patients with TBP and 18 of 20 MA had lower gradient. Pare et al found the SAAG to be less than 1.1 g/dL in 93% of patients with MA, but more than 1.1 in 97% of LC patients [8]. Although portal pres-sure was not measured in the present study, it has been re-ported that the discriminative separation between groups of patients such as LC and TBP/MA was due to marked difference in the height of portal pressure [7,8]. We believe the increased SAAG observed in 2 of the MA patients could be due to massive hepatic metastasis-conditioned portal hyper-tension. It has been observed that hepatic venous pressure gradient in individuals with liver metastasis is similar to that quantified in cirrhotic patients [7]. Another possibility could be the existence of LC in these patients, even though no indication of this was found in any of them.

It is important to note that previous workers have reported protein concentrations in cirrhotic ascites or MA similar to those measured in our study [4]. Diagnostic efficiency of AF total protein determination was 80% in Pare’s and Jungst’s studies [8,20]. This is higher than the results ob-tained in this study. Nonetheless, diagnostic efficiency of SAAG was 95% in Jungst’s study as well as our investiga-tions.

Thus, the present data have shown that the determination of SAAG is most useful in differentiating ascites caused by LC from ascites due to TBP/MA. In terms of simplicity and cost effectiveness, measurement of albumin gradient may have considerable advantage over other biochemical tests in in-vestigating ascitic patient in this environment.

We are indebted to the University of Maiduguri who support Dr Malabu as a Research Fellow, and to the Adamawa State Education Endowment Fund for additional funding; and to Mr J. L. Fajimi for his skilled technical assistance.