ARX gene with an impressive role in X-linked intellectual disability

Intellectual disability is the most common neurodevelopmental defect in the worldwide. X-linked intellectual disability (XLID) is the frequent form of intellectual disability which includes a heterogeneous group of inherited disorders emerging as various degrees of intellectual disabilities. XLID has a prevalence of 2.6 cases per 1,000 in the general population and accounts for over 10% of all cases of intellectual disability. Based on associated phenotypes, XLID is subdivided into syndromic (S-XLID) and non-syndromic (NS-XLID) forms; where two third of XLID cases are thought to be non-syndromic. Among the non-syndromic form, the aristalessrelated homeobox gene (ARX) gene is one of the ideal candidates to be evaluated in NS-XLID, since its mutations are responsible for about 9.5% of XLID cases. The ARX is located on the Xp22.13 genomic region and encodes a highly conserved protein with a considerable role in Wnt/β-catenin signaling pathway. Base on review literature, mutations in ARX gene has a particular influence on the critical processes associated with the brain development. Our results in bioinformatics study of molecular features, second and quaternary structures of ARX gene and also the phylogeny tree of ARX protein is showed that the ARX is a highly conserved protein with a substantial role in an important developmental pathway and its deficiency can cause irreversible defects, mainly in brain, that leads to the development of XLID as a common form of intellectual disability and also, the sequence alignment of this protein with other spices confirms that the functional domains of ARX protein are highly conserved, thus it has been predicted that the mutations of this gene is highly pathogenic. Alongside, we mainly focused to gather the data addressing the structural properties of ARX protein and bioinformatics assay of this protein to find the important role of ARX gene in the integrity of normal brain development.

Intellectual disability (ID) is the most frequent neurodevelopmental disorder in the world characterized by an intelligence quotient (IQ) below 70. ID is associated with deficits in adaptive behaviours (including personal or social manners) before the age of 18 [1]. The prevalence of ID is approximately (2-3)% in the general population; however, it is widely different among populations based on epidemiological, cultural and nutritional backgrounds, and particularly for mild cases, it varies significantly based on several heterogeneous factors causing ID [2-8]. In addition to genetic factors, nongenetic (so-called environmental) susceptibility factors can also play a substantial role in increasing risk of ID. For example, prenatal exposure to teratogens (e.g., alcohol, infectious) and serious birth injuries are two main environmental factors which may participate in the pathogenesis of ID [9,10].

ID is divided into mild to moderate (IQ 50-70) and severe to profound (IQ<50) forms. Although the prevalence of severe form of ID is roughly stable, the prevalence of mild ID is unstable and specifically depends on the cultural and social demographic variables [1].

In a study, the prevalence of mild, moderate, severe and profound ID has been reported about 85%, 10%, 4%, and 2% of the all affected individuals, respectively [11]. ID or associated phenotypes resulted from a monogenic defect are subdivided into 4 categories according to the mode of inheritance, autosomal dominant ID, autosomal recessive ID, X-linked ID and mitochondrial ID [12-14]. Mutations in X-linked genes account for (5-10)% of all types of ID and are the most likely causes of ID in males [15].

It was first on 1938 that Lionel Penrose observed a higher male: female ratio of intellectual disability in British population. This ratio was 1.25:1 [17]. The observation was further confirmed by numerous studies in different centers where they all agreed with the fact that there is an excess of 30% in affected males with ID. This tendency of men being more affected than females together with findings obtained from large mentally retarded pedigrees that show X-linked inheritance, raised the idea that this excess might be attributed to X chromosome [18-22]. Identification of fragile X syndrome in late 1970s was an important finding to approve this hypothesis [23]. Since then, several other X-linked IDs were described.

Based on associated phenotypes, XLID is subdivided into syndromic (S-XLID) and non-syndromic (NS-XLID) forms; where two third of XLID cases are thought to be non-syndromic [12,24]. In the case of S-XLID, more than 100 of the underlying loci or genes have been identified until now, while for the NS-XLID, this number does not exceed 50. Nevertheless, with the current advances in molecular genetics, this number is drastically increasing [13,25]. About 140 S-XLID have been descried so far among which Fragile X-syndrome is the most common cause of XLID [26]. It is estimated that 40% of the protein-coding genes identified on the human X chromosome are expressed in the brain. XLMR could result from mutations in any of these loci. In a recent update of genes involved in XLID, more than 100 X-linked genes have been identified where some of them play more important roles than the others [13,25].

Two genes playing considerable roles in syndromic XLID are FMR1 and FMR2. FMR1, the first XLID gene that cloned, encodes an mRNA-binding protein that acts during mRNA transport and translational regulation. Mutations in FMR1 lead to a unique phenotype called Fragile X syndrome (FXS). FXS is the most common form of XLID [23]. Expansions of CGG repeats (>200 repeats) in 5'UTR of FMR1 is the cause of FXS [27-30].

FMR2 is located distal to FMR1 and is separated only by LOC100128690, LOC100132556 and MIRN514-2 at Xq27.3 [31]. It has been thought that the screening of FMR2 gene mutations in patients that are negative for FMR1 mutation is essential. However, expansion repeats in this gene are relatively rare. FMR2 is a transcriptional regulator, and is probably involved in long-term memory and enhanced long-term potentiating [32-34].

Despite the growing number of genes identified in XLID, current information about their function is scarce. The major families of NS-XLID genes are involved in transcriptional regulation, cell proliferation, cell differentiation and cell locomotion (actin cytoskeleton), especially in central nervous system [35,36]. For instance, Rho proteins are highly conserved regulators of the actin cytoskeleton, cell adhesion and migration, cytokinesis and gene expression; hence, a number of genes contributing to XLID pathogenesis should be involved in Rho-GTPase signaling pathway. In humans, four XLID genes that participate directly in cellular signaling through Rho-GTPases are oligophrenin 1 (OPHIN1), PAK3, αPIX (ARHGEF6) and GD1 [37-40]. Oligophrenin acts as a Rho-GAP (GTPase-activating protein) and stimulates the GTPase activity of RHOA, RAC1 and CDC42 [38,41]. PAK3 is a serine/threonine protein kinase that accelerates the effects of downstream RAC1 and CDC42 on the actin cytoskeleton and gene expression [42]. in addition, αPIX is a guanine nucleotide exchange factor for RAC1 and CDC42 [39]; and GDI1 is involved in RHO-GTPase signaling through regulation of Rab4 and Rab5 pools, thus it is probably involved in the maturation of synaptic vesicles [43].

The selected list of involved XLID genes and their related phenotypes are described in Tables 1 and 2 [1]. ARX (ARX gene, OMIM no.300382, GenBank no.NM_139058) is the most frequent cause of intellectual disability after fragile X syndrome; and its mutations are highly associated with syndromic and non-syndromic forms of XLID [44], which will be discussed below in this review.

*Mutated in both syndromic and non-syndromic forms of XLID; NMDA, N-methyl-D-aspartate.

The Aristaless-related homeobox gene (ARX) is located on the Xp22.13. It consists of 5 exons (Figure 1) and is transcribed into 2.8kb mRNA. ARX mRNA encodes a 562 amino acids protein that seems to be a transcriptional activator and repressor with the main task in fetal and adult forebrain, pancreas and testis growth [45-49]. The expression of this gene is much more in fetal brain and has a critical role in differentiation and maintenance of neuronal cell during embryogenesis [47,50,51]. The structure of ARX protein is consists of some different compartments, including:

(1) A highly conserved homeobox domain (repressor domain) (Table 3) that spans from amino acids 328 to 387. This part of protein is directly binds to DNA.

(2) C-terminal OAR or aristaless domain (activator domain) which spans from amino acids 530 to 543 of protein (Figure 1).

(3) Octapeptid domain which is a receptor site beside the N-terminal of the ARX protein for some enhancer proteins that contribute to ARX functional activity adjustments.

The 24 bp duplication in exon 2 is the most frequent mutation that found in this gene which is consists of 45% of all mutations. This mutations lead to an expansion in the second polyalanine tract of ARX protein from 12 to 20 residues [55-58]. Furthermore, addition of alanine residues to the first polyalanine tract is also reported [45,59]. These mutations influence the transcriptional repression traits of ARX protein [60]. The 4th tract is more conservative in comparison to others mentioned previously [61]. An acidic domain and three nuclear localization sequence motifs (NLS1, NLS2 and NLS3) are other parts of this protein [62-64]. It was determined that ARX gene is evolutionarily conserved in different species and according to Figures 2-4, the local similarity to its target binding sites is high. Also, the sequence alignment of this protein with other spices (Figure 2) confirms that the functional domains of ARX protein are highly conserved, thus it has been predicted that the mutations of this gene is highly pathogenic [65].

Figure 2. The phylogenetic tree of ARX protein (The comparison between Homo sapiens ARX protein and 10 other species). 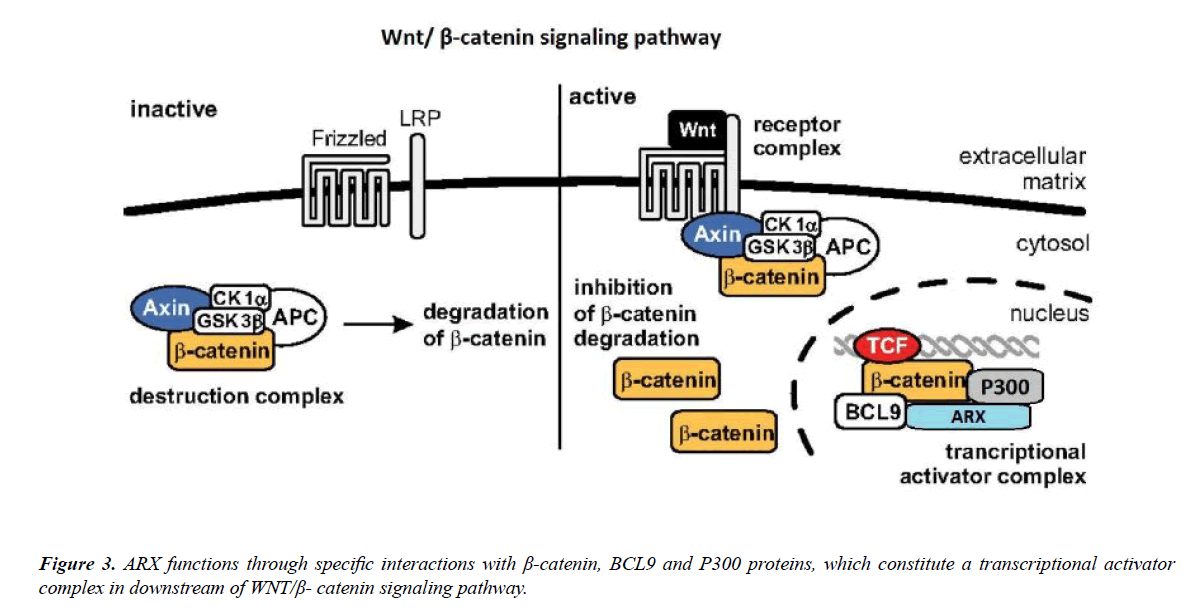 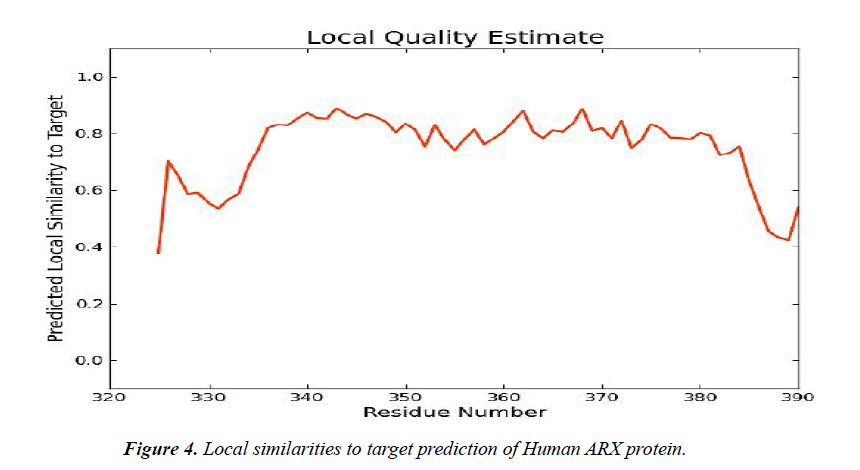 ARX and the frequency of its mutation

According to European XLID consortium, mutations of ARX gene has been found in 9.5% of families with X-linked intellectual disability and 7.5% of large families with 2 or more affected males from multi generations that are related with each other through an obligate carrier female [51,66-68].

Near to 70% of the families linked to Xp22.1 have the c.428_451dup (24 bp) which results in the expansion of the second poly (A) tract in the ARX protein and may lead to syndromic and non-syndromic forms of XLID [69-71]. The c.428_451dup with another known missense mutation in the exon 1 of ARX gene, c.98T>C (Leu33Pro) at octapeptid domain, are the main reasons of NS-XLID caused by ARX gene defects [72,73]. According to the study of S. S. Abedini, the later mutation accounts for 6.25% of the cases in the linked families from Iranian population, which is in agreement with the other published studies performed on different races [74]. 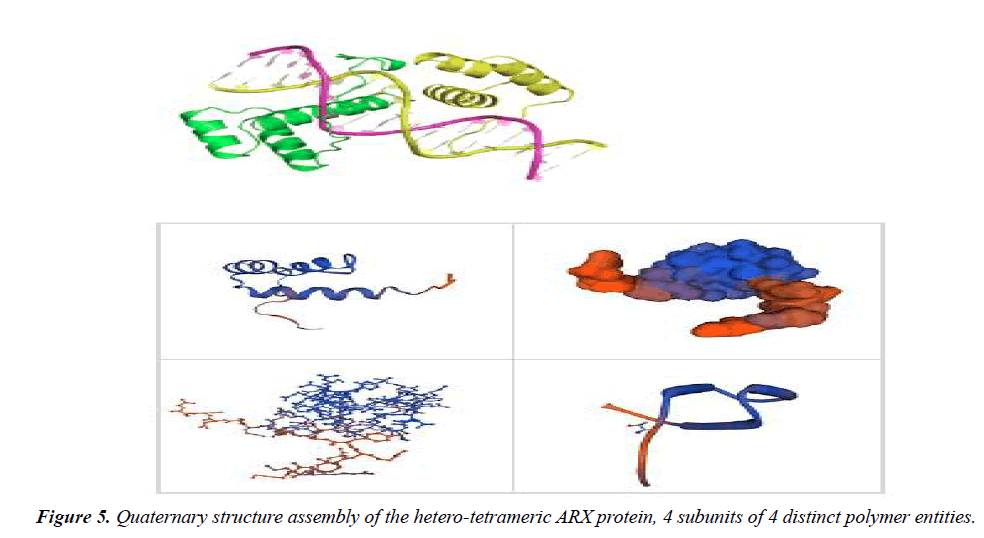 As illustrated in Figure 1 and 2, it was determined that ARX gene is evolutionarily conserved in different species. Moreover, the sequence alignment of this protein with other spices confirms that the functional domains of ARX protein are highly conserved, and therefore it has been predicted that the mutations of this gene can be highly pathogenic.

Taken together, ARX is a highly conserved protein with a substantial role in an important developmental pathway and its deficiency can cause irreversible defects, mainly in brain, that leads to the development of XLID as a common form of intellectual disability.