Background: Arsenic Trioxide (As2O3) is a FDA-approved agent for the treatment of Acute Promyelocytic Leukemia (APL). But the high-toxicity is a bottleneck of the effect of As2O3.

Results: In vitro cytotoxicity test showed that the inhibition rate and apoptosis level of NB4 cells treated with As2O3 nanoparticles was much higher than that of traditional As2O3. Moreover, As2O3 nanoparticles resulted in a more significant increase in p-PTEN expression and a greater reduction in p- Akt expression compared with traditional As2O3.

Acute Promyelocytic Leukemia (APL) is the M3 subtype of acute myelogenous leukemia and cytogenetically is characterized by a translocation of chromosomes 15 and 17, which results in the fusion between Retinoic Acid Receptor α (RARα) and the Promyelocytic Leukemia (PML) gene. APL is always accompanied with severe bleeding tendency and disseminated intravascular coagulation. The first-line treatment of APL was chemotherapy. More than 80% of patients treated with all-trans retinoic acid along with chemotherapy can achieve a prolonged remission. Relapsed patients are often treated with arsenic trioxide successfully [1].

Arsenic Trioxide (As2O3) is the primary component of arsenic (pishuang), a kind of traditional Chinese medicine. In the early 1970’s, some Chinese physicians from Harbin Medical University recognized arsenic as an effective ingredient for leukemia treatment. In 1996 and 1997, notable effect was reported for the use of As2O3 in APL [2]. The Food and Drug Administration (FDA) approved As2O3 as frontline treatment for APL in 2000 [3]. Apart from APL, it was used in several kinds of diseases, such as Chronic Lymphocytic Leukemia (CLL), liver cancer, syphilis, psoriasis, rheumatism [4-7]. However, the toxicity of arsenic was recognised by people gradually. The side effect of long-term chronic exposure to arsenic include hyperpigmentation of the skin, hyperkeratosis of the palms and feet, cancers of lung, bladder, prostate, kidney, liver as well as neuropathy, leucopenia, encephalopathy, peripheral vascular diseases and diabetes. Consequently, it faded out from clinical applications owing to its toxicity and carcinogenic properties [5].

Nanoparticles are becoming an emerging treatment modality for cancer. The advantages of nanoparticles are delivering anticancer drugs to the tumor, the ability to enhance permeability, bioavailability and efficacy as well as reduction or reversion of multidrug resistance. Owing to the unique features of tumor vasculature, the “Enhanced Permeability and Retention (EPR) effect” allows nanoparticles to extravasate into extravascular spaces and increase the drug concentration inside tumor tissues more than free drugs [8]. Nowadays, most nanoparticles can selectively target on cancer cells, reducing the undesirable side effects of conventional chemotherapy, and therefore improving the efficacy of patients [9,10].

The As2O3 nanoparticles were prepared with the so-gel method. In this study, the in vitro effect of As2O3 nanoparticles on NB4 cells was assessed by evaluating MTT analysis, mitochondrial membrane potential and flow cytometric analysis. Furthermore, we explore the possible mechanism of by detecting the protein levels of p-PTEN, p-AKT, Bax, caspase-3, caspase-9 and AIF.

The As2O3 nanoparticles were synthesized with the sol-gel method as we previously described [11]. The preparation method was as follows: As2O3 powder and hydrochloric acid were mixed and stirred for 1030 min. Ethanol was then added, the solution was stirred at 5060°C for 2030 min and sonicated for 5 min. Finally, distilled water was added, and the mixture was sonicated for another 1020 min.

The inhibitory effect of As2O3 (Institute for Drug Control of the Ministry of Health of China) and As2O3 nanoparticles was estimated by MTT assay. There were 3 groups, which were control, As2O3 and As2O3 nanoparticles. NB4 cells were seeded on 96 well plates in quadruplicate at a density of 2 × 105/well in 100 μl. As2O3 and As2O3 nanoparticles (4 different final concentrations: 0.5, 1, 2, 4 μmol/L) were added at the right time according to the group setting. After 24, 48 and 72 h of treatment, the cells were incubated for 3-4 h with MTT (Changchun Biotech Co., Ltd. Changchun, China) and lysed with acidified isopropanol. Absorbance was measured at 570 nm. The inhibition rate was calculated using the following formula: Inhibition rate=((absorbance value of control groupabsorbance value of test group)/absorbance value of control group) × 100%. All experiments were repeated three times.

Cellular nuclear was stained with Hoechst 33342 (Hoechst Pharmaceuticals) and Propidium Iodide (PI) to observe the cellular apoptosis or necrosis situation by fluorescence microscopy. Briefly, 1 × 106 NB4 cells were incubated with 3 μmol/L As2O3 and As2O3 nanoparticles for 24 h. Cells were washed with PBS, suspended with new fresh medium, double stained with Hoechst 33342/PI and visualised by fluorescence microscopy.

NB4 cells were incubated with 1.5 and 3 μmol/L As2O3 and As2O3 nanoparticles for 24 h. 1 × 106 NB4 cells were stained with Rhodamine 123 (Sigma). Cells were washed with PBS, suspended with new fresh medium. Mean Fluorescence Intensity (MFI) was on behalf of Mitochondrial Membrane Potential (MMP) and examined the MFI in each group with Flow cytometric. 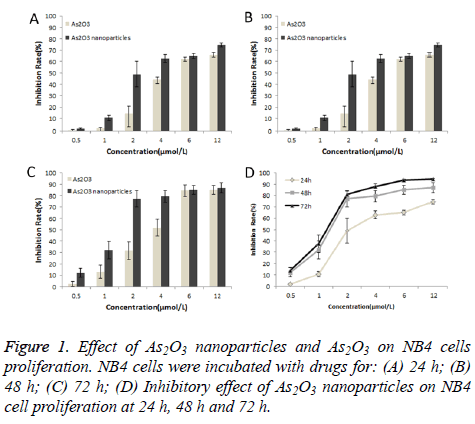 NB4 cells were incubated with 3 μmol/L As2O3 nanoparticles or As2O3 for 24 h. Hoechst 33342/PI double staining was performed to observe the cell nuclear apoptosis or necrosis situation. Apoptotic cells were stained blue by Hoechst 33342 with pyknosis and stained red by PI with chromatin condensation. As shown in Figure 2, apoptosis was present after being treated with As2O3 nanoparticles or As2O3. 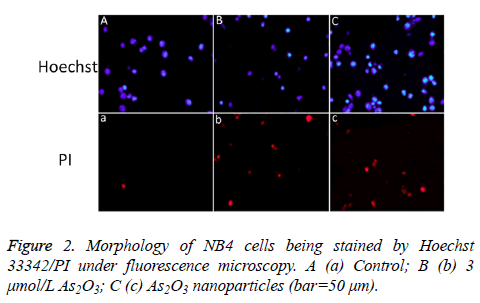 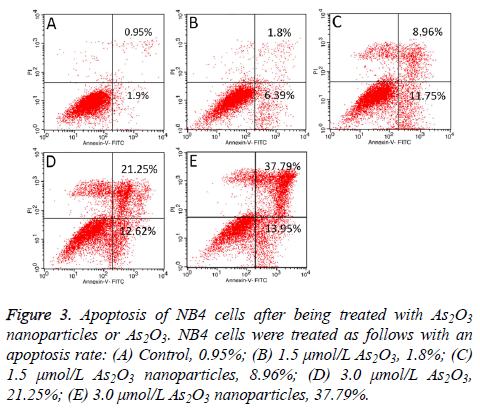 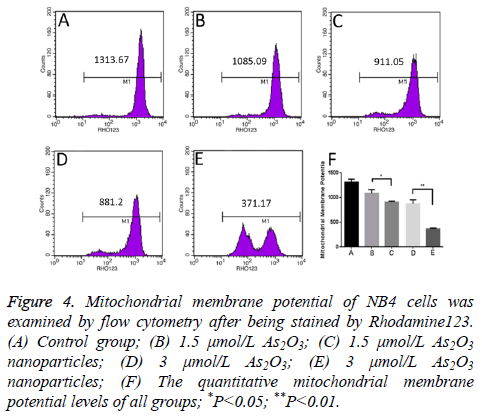 Meanwhile, the expression of PTEN and p-Akt were much lower in the As2O3 nanoparticles group than in the As2O3 group, as well as the levels of p-PTEN and Bax were much higher in the former group than the latter with a dosedependent manner (Figure 5). 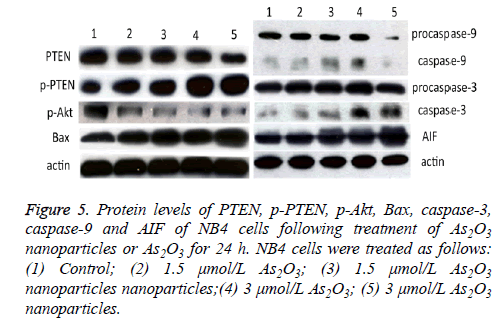 We further examined the level of AIF of NB4 cells. Figure 5 showed that the AIF level was higher in the As2O3 nanoparticles group than the group of As2O3 solution.

As2O3, a kind of traditional Chinese medicine, had been approved as frontline treatment for APL by FDA for many years. It could also be used in other solid cancer, such as liver cancer, prostate cancer, cervical cancer and breast cancer [9,12-18]. However, its clinical application is somehow limited owing to its high toxicity to the normal tissues. Therefore, different formulations of As2O3 with higher antitumor efficacy and lower toxicity are needed to be further studied.

Several kinds of As2O3 nanoparticles have been reported. Qian developed a scFvCD44v6-decorated PEG-PDLLA nanoparticle, which scFv-As-NP could target delivery of As to CD44v6-positive tumor cells PANC-1 [19]. The As2O3 nanoparticles with better antitumor efficacy can highly improve the drug concentration in tumor site but not normal tissues owing to the EPR effect and its better targeting effect. Nanobin encapsulation of As2O3 improves the pharmacokinetics and antitumor efficacy of As2O3 in a murine model of breast cancer and lymphoma [20,21].

In our previous study, we prepared small-sized (<10 nm and ~40 nm) As2O3 nanoparticles with sol-gel method [11]. Herein, the superiority efficacy of proliferationinhibition and apoptosisinduction effects in vitro of As2O3 nanoparticles than As2O3 were further confirmed by evaluating MTT assay, apoptosis detection with flow cytometric assay, mitochondrial membrane potential, p-PTEN, p-AKT, Bax, caspase-3, caspase-9 and AIF protein levels. A much smaller dose of As2O3 nanoparticles can achieve a good antitumor effect, which would reduce the systemic toxic side effects with a reduction of toxicity.

This work was supported by the Department of Science and Technology of Jilin Province, China (Grant Number 20150204005YY).

The authors have no conflicts of interest to declare.

This article does not contain any studies with human participants or animals performed by any of the authors.