We report three cases of boys with severe hemophilia A (11 years, 5 years and 1-year- old). They all underwent central venous line (CVL) insertion for primary prophylaxis in the first and the third cases and for the induction of immune tolerance in the second case. In all cases, the CVL was a subcutaneous port-a-catheter and the CVL associated thrombosis was suspected because of malfunction of the port-a-catheter. In one of the boys, the port-acatheter had been in place for 6 months and in the other 2 for over 3 years. In all three boys there was no evidence of an underlying genetic predisposition to thrombosis e.g. activated protein C (APC) resistance. All of them underwent bilateral arm venogram which confirmed the presence of CVL-related thrombosis. Thrombi were located in the left subclavian and brachiocephalic veins in the first and second cases, and in the left brachiocephalic vein in the third case. These findings were unexpected as historically hemophiliacs are thought to be protected from thrombosis by virtue of anticoagulation nature of their disease. Based on this observation, we strongly recommend physicians caring for hemophiliacs to critically evaluate the risks and benefits related to CVL insertion

CVL’s have been used in both children and adults to facilitate the administration of anti-neoplastic drugs, parenteral nutrition and blood products. In recent years CVL’s have been increasingly used to secure venous access in boys with hemophilia. Current management of very young boys with severe hemophilia has as a primary goal, the prevention of disabling arthropathy which is an inevitable consequence of repeated spontaneous or trauma related bleeding into joints, especially the ankles, knees and elbows. In an effort to prevent chronic joint damage in boys with severe hemophilia many hemophilia centers now begin a program of primary prophylaxis in such patients starting at the age of 1-2 years [1-3]. The aim of the prophylactic program is to maintain a minimum circulating factor level of 1%; this goal can be achieved by the intravenous administration of 25-40 U/Kg of factor/III on alternate days (minimum x 3/week) or factor IX twice per week for boys with hemophilia A or B, respectively. Successful maintenance of a prophylaxis program in very young boys is a real challenge because of the need for repeated peripheral venous access and as a result placement of a central venous catheter is often recommended.

Although venous access for primary prophylaxis is the most common indication for placement of a central venous line in boys with hemophilia, these devices are also placed in selected patients to facilitate an immune tolerance program in boys with high titer inhibitors.

Central venous lines, however, are associated in some patients with significant clinical problems; infection, hemorrhage, thrombosis, thrombophlebitis, dislodgment and rarely subacute bacterial endocarditis [1,4,5]. Their use has significant consequences and is the leading cause of deep vein thrombosis (DVT) and pulmonary embolism (PE) [6-8].

In this report we identified a clinically significant, and hitherto infrequently reported, complication of CVL’s in three boys with hemophilia.

This is an 11-year-old boy with severe hemophilia A (Table 1). Factor VIII (FVIII) level < 0.01 U/ml. He was placed on prophylaxis, 30 U/ Kg every 2 days of recombinant factor VIII (rVIII). Owing to poor peripheral venous access, an implantable vascular access device (portaa- catheter; port; vital-Port, Cook Inc., Leechburg, PA, USA) was inserted, around the age of 7 years, via the left internal jugular vein. He was noted to have malfunctioning port in the form of resistance to infusion and absence of blood return. Detailed personal and family history was negative for thrombosis, as well as negative past history of venous catheterization. There were no signs suggestive of deep vein catheter-related thrombosis i.e. visible distended veins over the anterior chest wall, ulceration and/or color change, facial or neck edema, impaired upper limb pulse, or impaired upper limb sensation, asymmetry in the upper mid-arm circumference. Upper chest X-ray showed a normally placed port. Local urokinase infusion failed to return the port’s function. Bilateral arm venogram was done which revealed DVT in the left suclavian and brachiocephalic veins (Figure 1). Extensive prothrombotic work-up have been made to assess weather he has any predisposing condition which could explain the thrombosis. These were all within normal limits, which included: protein C, protein S (total and free), antithrombin III (AT III), prothrombin gene mutation, activated protein C resistance (APCR), antiphospholipid antibodies (APLA), anticardiolipin antibodies (ACLA), and factor V Leiden. Following this, the decision was made to remove the port-a-catheter. He did not require second CVL insertion as he grew older with less difficulty accessing peripheral veins. 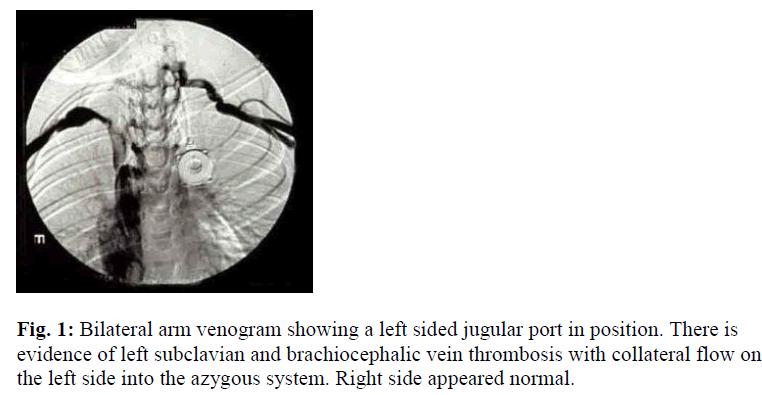 Fig. 1: Bilateral arm venogram showing a left sided jugular port in position. There is evidence of left subclavian and brachiocephalic vein thrombosis with collateral flow on the left side into the azygous system. Right side appeared normal.

This is a 5-year-old boy with severe hemophilia A; FVIII < 0.01 U/ml. He had recurrent severe hemarthrosis for which he required frequent FVIII replacement therapy. He was placed on prophylaxis; 30 U/ Kg every 2 days of rFVIII aiming to prevent recurrent hemorrhagic episodes and ultimately to prevent disabling chronic arthropathy. Owing to poor peripheral venous access, first port-acatheter was placed at one year of age into the right internal jugular vein. Unfortunately it was removed after 11 days due to Staphylococcus aureus cellulites around the port.

One month following removal of the port and once the complete resolution of the cellulites has been achieved; a second port-a-catheter was placed into the left internal jugular vein. One year following regular prophylactic program: infusion of 30 U/ Kg every 2 days of rFVIII, inhibitor to human and porcine FVIII were detected. The inhibitors ultimately reached peak levels of 1024 and 179 Bethesda Units (BU) to human and porcine FVIII, respectively. He was started on immune tolerance program (100 U/Kg/day of rVIII each given over 5 min-utes through his port) and placed on an intensive therapy program. After approximately 4 years of regular use of the port, it suddenly stopped infusing. X-ray of the upper chest ruled out mechanical cause for its malfunction. Again, local urokinase infusion into the port failed to return its function. Personal and family history was negative for thrombosis, except for the past history of CVL insertion at the age of one year. Physical examination revealed visible distended veins over the anterior chest wall. Otherwise no other abnormalities were detected such as change of the color or size of the upper limb, facial swelling, impaired limb sensation or pulse. Bilateral arm venogram was conducted which showed left suclavian and brachiocephalic DVT (Figure 2). 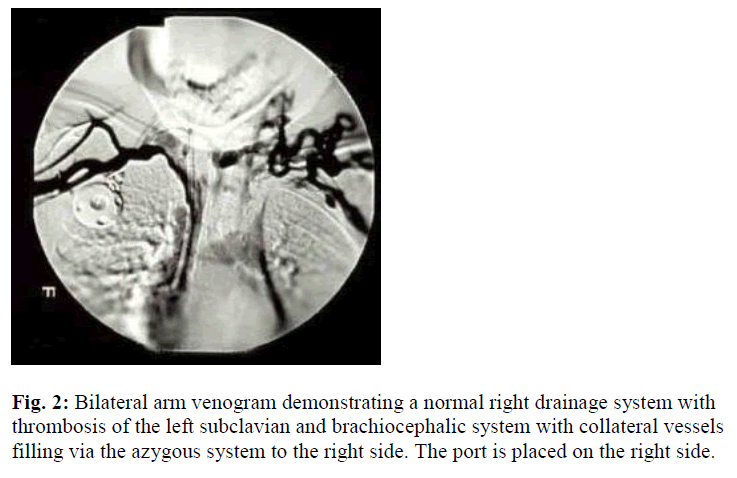 Fig. 2: Bilateral arm venogram demonstrating a normal right drainage system with thrombosis of the left subclavian and brachiocephalic system with collateral vessels filling via the azygous system to the right side. The port is placed on the right side.

Extensive prothrombotic work-up have been made to assess weather he has any predisposing condition which could explain the thrombosis, all were within normal limits. Following this, the port was removed. Given the patient need of venous access for both prophylaxis and immune tolerance, a new port-a-catheter was placed in the right internal jugular vein.

This is a 1 year old boy with severe hemophilia A. FVIII level < 0.01 U/ml. He developed massive subdural hematoma at birth as a complication of assisted difficult labor. He was managed for his first two week with continuous infusion of rVIII followed by prophylaxis; 30 U/Kg every 2 days of rFVIII aiming to prevent hemorrhage into vital organs. Owing to poor peripheral venous access a port-acatheter was placed at exactly one month of age into the right internal jugular vein. Half a year following regular access and use of the port, it stopped functioning. X-ray of the upper chest did not show evidence of mechanical cause of port’s malfunction. Like the previous 2 cases, local urokinase infusion failed to work.

Personal and family history was negative for thrombosis. Physical examination showed no signs of DVT. Bilateral upper arm venogram showed left brachiocephalic DVT. Similar to previous 2 cases, Extensive prothrombotic work-up have been made to assess weather he has any predisposing condition which could explain the thrombosis, all were within normal limits. Given the patient need of venous access prophylaxis, a new port-a-catheter was placed in the right internal jugular vein shortly after the removal of the thrombosed one.

CVL’s are placed in boys with hemophilia for two main reasons: 1) to secure venous access in very young boys (often 1-2 years of age) placed on a regimen of primary prophylaxis to prevent musculoskeletal disease; and 2) to facilitate venous access, and sometimes plasmapheresis, in boys with hemophilia and high titer inhibitors placed on a program of immune tolerance. The most frequent complication of CVL’s is line-related infection, local bleeding and mechanical failure have also been reported [1]. Two types of central venous devices have been used; external and subcutaneously implanted ports (port-acatheter). Port-a-catheters are preferred to external lines when used to facilitate primary prophylaxis since infection rates are lower with the totally implanted devices (as compared to external CVL’s), and the buried devices allow desirable activities such as swimming [2,3,5,8]. The short term problems caused by CVL related DVT include PE, loss of venous access, pleural effusion and superior vena cava syndrome. The long term consequences of DVT include postphlebitic syndrome (pain, swelling and skin rash), bleeding from varices, recurrent thrombosis, and long term anticoagulation therapy [9]. The short and long term consequences of CVL related DVT are serious and include mortality, therefore, accurate diagnosis must be established. The frequency of CVL related DVT in children varies according to the imaging method used for diagnosis; it ranges between 15-66 %. [6,10-14]. Venography, infusing contrast medium into the hands or arms, delineates the entire upper venous system, hence its considered the “gold” standard method for diagnosis of DVT in the upper body venous collecting system (subclavian and brachiocephalic veins) [15,16]. There has been few case reports on CVL-related DVT in hemophiliacs [1,8]. Recently, Vilder et al. [17] reported 2 symptomatic boys with severe hemophilia who were confirmed to have CVL-related thrombosis of subclavian veins by contrast venography. Andrew et al. reported the frequency of CVL related thrombosis in a general pediatric population in the order of 33 % [6], which is much higher than that reported by Medeiros et al. in a cohort of hemophilic patients (frequency 8%) [18].

Of note, this article questions the hypothesis which considers boys with hemophilia to be naturally anticoagulated. Nonetheless, they are at risk for the development of DVT if a significant risk factor is present e.g. presence of a foreign body such as a CVL.

In conclusion, based on our observation we now counsel parents that the risk of catheter related complications is significant. This information should be taken into consideration before a recommendation is made to place a CVL in a very young boy with hemophilia. Physicians who care for these patients should be vigilant about this important complication and a bilateral upper arm venogram should be ordered if there are signs (e.g. dilated veins on the upper chest wall, swelling of the arm, port malfunction that does not resolve with local instillation of fibrinolytic therapy) that may point to an underlying DVT.

It seems that the frequency of CVL-related DVT in hemophiliacs is high; therefore further studies in larger cohorts of boys with hemophilia and indwelling catheters are warranted to define the true risk of CVL-related thrombosis. It will be important to educate physicians about this complication since the traditional assumption has been that severe hemophilia may “protect” against CVL associated deep venous thrombosis. This information is essential for families and physicians who must weigh risk vs. benefits of these foreign devices in this patient population.