A CVC (central venous catheter) is used to measure Central venous pressure and also to administer drugs. The direct measurement of the estimated insertion length using the puncture site and the external landmark could be more practical and bedside. Here we use sternal head of right clavicle and nipple as landmarks for inserting the CVC (central venous catheter) tip near the svc (superior vena cava) and right atrial junction. Objectives of the Study: To Evaluate a method for cvp insertion depth using anatomical landmark

Materials and Methods: A study in PICU, KIMS (kempegowda institute of medical sciences) from Oct 13-14. 35 patients were enrolled irrespective of age. Point A marked at the sternal head of the right clavicle, A horizontal line drawn connecting the nipple on both sides, and then the midpoint of the perpendicular line drawn between Point A and the horizontal line was designated as Point B. The distance between the insertion point of the needle (I) and Point A is measured and the distance between Points A and B was also measured. Insertion depth was determined by adding the two and subtracting 0.5 cm from this. Presence of CVC tip in right atrium and svc junction was confirmed using 2D Echo (echo cardiography) and X-ray chest.

Conclusion: It is inferred that this method can be used safely in calculating length of the CVC for right IJV catheterization.

A central venous catheter (CVC) is inserted to measure Central venous pressure (CVP) and also to administer drugs or fluid in the perioperative period and in PICU. The CVC tip has been recommended to be placed just above the superior vena cava–right atrium (SVC–RA)(superior vena caval and right atrial) junction, parallel to the SVC to prevent complications such as arrhythmia, thrombosis, tricuspid valve damage, and cardiac tamponade [1]. Various methods using patient’s characteristics, transoesophagealechocardiography (TOE) and ECGguided CVC placement have been recommended to decide the proper depth of CVC [2]. However, when the depth of CVC is decided based on patient’s characteristics such as height or age, it does not make up for various puncture sites. The puncture site at the lower part of the neck may lead to a dangerous deep insertion of the CVC, whereas the higher approach for the CVC insertion may produce a shallow insertion. Although TOE (transesophageal) and ECG-guided CVC placements are known to be precise, they are not only cumbersome but also may not be always available. The direct measurement of the estimated insertion length based on the puncture site and the external landmark could be more practical. The nipple and the sternal head of the right clavicle are easily identified and lie over the path of the internal jugular vein (IJV). In addition, the carina is recommended as a useful target level for the CVC tip position [3]. Therefore, it would be useful, if the CVC tip can be placed at the level of svc and right atrial junction by using the external landmarks. We evaluated the sternal head of the right clavicle and nipple as external landmarks for inserting the CVC tip near the svc and right atrial junction in children.

2) To find out the exact anatomical relationship between carina and svc / right atrial junction in X-ray and 2D ECHO.

Methods of collection of data

In the present study 35 paediatric patients undergoing internal jugular vein catheterization for absolute indication were enrolled irrespective of age who were admitted to PICU in Kempegowda institute of medical Sciences, Bangalore during the period of one and half years from January 2014 to July 2015.Inclusion criteria: All children undergoing right internal jugular vein Catheterization for absolute indication in KIMS, PICU are included irrespective of age. Ethical approval was taken from the institution.

Dextrocardia, extra cardiac vascular abnormality and Gross anatomical deformity of chest is excluded: With institutional approval and parental informed and written consent, paediatric patient undergoing internal jugular vein catheterization for absolute indication were enrolled irrespective of age (i.e., 1 month to 18yrs. Patients were subjected to initial evaluation of history taking, clinical examination and routine investigations. Under sedation, the patient was placed in the Trendelenburg position with the head slightly rotated to the left and two points was marked on the patient’s skin. Point A was marked at the sternal head of the right clavicle, i.e. one of the most prominent points. A horizontal line was drawn connecting the nipples on both sides, and then the midpoint of the perpendicular line drawn between Point A and the horizontal line is designated as Point B (Figure 1). Using a sterile technique, the IJV punctured and guidewire was inserted. The distance between the insertion point of the needle (I) and Point A is measured using a sterile disposable paper ruler and the distance between Points A and B is also measured. 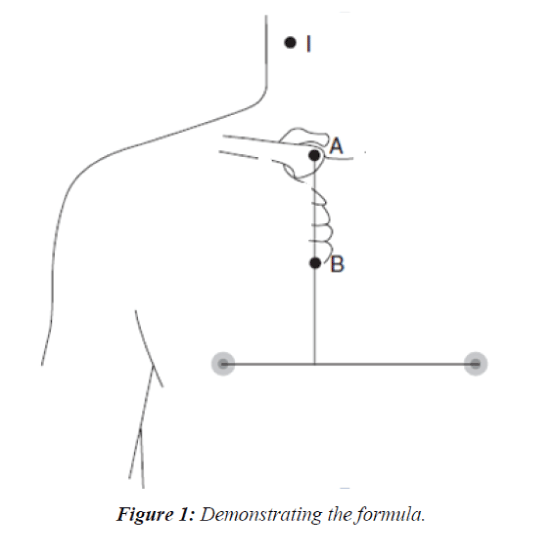 To position the tip of the CVC at the level of svc and right atrial junction, the insertion depth of CVC was determined by adding the two measurements and subtracting 0.5 cm from this. After insertion of the CVC, the presence of the CVC tip in the right atrium and svc junction was confirmed using a 2D Echo and an antero-posterior CXR is obtained with the patient’s head and neck in the neutral position after procedure. After drawing the horizontal line at the level of the carina and the CVC tip, and the point on the X-ray corresponding to cvp tip is noted in relation to carina.

Descriptive and inferential statistical analysis has been carried out in the present study. Results on continuous measurements are presented on Mean ± SD (Min-Max) and results on categorical measurements are presented in Number (%). Significance is assessed at 5 % level of significance. The following assumptions on data is made, Assumptions: 1. Dependent variables should be normally distributed, 2. Samples drawn from the population should be random, Cases of the samples should be independent Chi-square/ Fisher Exact test has been used to find the significance of study parameters on categorical scale between two or more groups.

Pearson correlation between study variables is performed to find the degree of relationship, Bland and Altman plot has been used to find the agreement between CVP used and Formula. 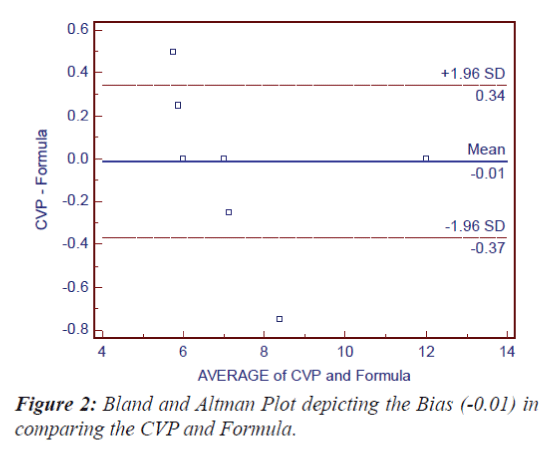 Figure 2: Bland and Altman Plot depicting the Bias (-0.01) in comparing the CVP and Formula.

35 patients admitted in PICU who underwent right internal jugular vein catheterization for absolute indications over a period of one and half year were enrolled.

Distribution of patients according to age in months

In the present study, out of 35 patients 8 were less than 5 months ( 22.9%), 6 patients were between 6-10 months ((17.1%), 3 were between 11-20 months (8.6%), 5 were between 21-40 months ( 14.3%), 3 were in between 41- 100 months (8.6%) and 10 were more than 100 months (28.6%). Most of the patients were less than 5 months (22.9%) or more than 100 months (28.6%). Similar study done by CVC Na et al. [4] took children less than 5 yrs into the study showed that the formula used successfully determined the CVC length in this age group. In the present study the formula has been extended into all paediatric age groups. Similar to study done by, Witthayapraphakorn et al. [5] where age group was 1-17yrs. In our study, number 6fr cvc was used in 16 patients (45.7%), followed by number 12fr in 10 patients and number 7fr was used in 8 patients, while number 8fr was used in only 1 patient. In a similar study done by Andropoulos [6] the cvc length was determined by weight of the patient, while in the present study the cvc length is determined by external anatomical land mark ie clavicle and nipple. In the present study the cvc line which was used in each patient was used of measurement obtained through the formula or the one which was nearer to the formula, Bland and Altman Plot was plotted depicting the Bias in comparing the CVP and Formula which was (-0.01) ie it was negligible, suggesting there was no difference in the cvc used and the measurement obtained through formula. In the similar study done by Witthayapraphakorn et al. [5], Bland Altman plot was used for inter observer bias. In the present study out of the 35 cases studied 1 cvc was 0.5 cm high (2.9%) in relation to carina (as visualised by X-ray), in 2 cases cvc was placed 0.5 cm deep (5.7%) in relation to carina and in 32 cases cvc was exactly placed at the level of carina (91.4%). In the present study carina is taken as the land mark for placement of cvc tip as visualised chest x-ray AP view. The carina has been recommended as a landmark to guide the CVC placement in recent studies done by Yoon et al. [7] and Stonelake et al. [8]. The carina was always located above the pericardial sac in adults and recommended as a landmark to guide the CVC placement as suggested by two such studies done by Albrecht et al. [9] and Schuster et al. [10]. According to another study done by Albrecht et al. [11] the pericardium generally crosses over the SVC below the carina level and duplicated pericardium strengthens just the medial side of the SVC in both adults and paediatrics. Therefore, if the target position of the CVC tip is the carina, the CVC tip will be always positioned outside the pericardial sac and have little chance of perforating the intrapericardial SVC or RA causing cardiactamponade.

In the present study SVC and right atrial junction is used as the exact point of placement of CVC tip as visualised by a bed side 2-D ECHO done post procedure, similar suggestion is made by Andropoluos in his study [6].

Based on study outcome for correlation of CVP used and Formula with minimum correlation of 0.90, with 99% statistical power at 1% level of significance, 35 patients are adequate [13] but age group and sex categorization is not elaborately done, hence similar such studies are required.

At the outset I thank the Lord, ALMIGHTY, for giving me the strength to perform all my duties, I am forever grateful to Dr. Srinivasa. S Head of the dept. and my other colleagues for their valuable support, I thank our Principal Dr. B.V Chandre Gowda for permitting me to utilize resources in completion of my work. I sincerely thank our M.S. Dr. Suresh I, of KIMS Hospital and Research centre for permitting me to conduct the study, my Special thanks to all the PICU staff and Department of Radiology and also last but not the least my family for encouraging throughout.