Application of laparoscopy in acute appendicitis for the elderly: A single center experience

Background and Purpose: Laparoscopic appendectomy for acute appendicitis is gold standard for adult patients in the world. The incidence of appendicitis in the elderly has risen. The aim of this study was to compare post-operatory outcomes in old patients with acute appendicitis approached by laparoscopy versus open surgery.

Results: The operation time was slightly longer in the LA group (P<0.001), but the time of recovery inflammatory response, time for diet and hospital stay were significantly shorter in LA group than that in OA group.

Complications: The rate of surgical site infection in LA group was less than that in OA group, and the rate of pneumonia between LA group and OA group was similar.

Conclusions: Laparoscopic appendectomy can be recommended as first choice for old patients with appendicitis.

We retrospectively analysed the elder patient records of all patients who were 65 years or more and underwent appendectomies at our institution between January 2010 and August 2017. This study was approved by the Ethical Committee of Dongzhimen Hospital, Beijing University of Chinese Medicine. The diagnosis of appendicitis before operation mainly depended on the medical history and the clinical examination: pain to the right lower quadrant or rebound tenderness, fever, elevated White Blood Cell count (WBC) and elevated C Reactive Protein (CRP), and Ultrasonographic (US) or Computer Tomographic (CT) findings of the abdomen [6]. In total, 286 patients with postoperative diagnosis of appendicitis were included and 38 patients were excluded with absence of histological confirmation of appendicitis or with other abdominal illness. 214 patients were operated by Laparoscopic Appendectomy (LA) and 72 patient were underwent Open Appendectomy (OA).

All surgeries were performed by an attending doctor and a senior resident of the department of general surgery of our hospital. The surgical approach was followed by surgeon's preference and criteria. LA were performed using a three trocar technique: two 10 mm and one 5 mm ports. The mesoappendix was transected with ultrasonic energy or homopolar coagulation. The appendix was ligated in the base with hem-olock clip or intracorporeal knotting and extraction was made using a plastic bag. A drain tube was placed in case of perforation and abscesses. For OA, a 5-8 cm McBurney’s incision was made in the right lower abdominal quadrant, and appendectomy was followed by tying off of the mesoappendix and radix of the appendix. The appendix stump was embedded. A drain was used in the rectovesical area when considered necessary. All patients received with cefuroxime sodium in combination with metronidazole or etimicin sulfate in case of allergies as perioperative antibiotic prophylaxis.

And a quality of life questionnaire of operated patients was required to be completed via telephone 1 month after discharge of the patients from our hospital [7]. Some questions, such as satisfaction with the size and appearance of the scar(s), the quality and intensity of the postoperative pain, were asked to be completed. The answers were evaluated using 4 point scores: not at all=1, few=2, moderate=3 and very=4. A control question was asked twice in order to ensure the reliability of the answers.

Descriptive and comparative statistical analyses were performed using Statistical Software for the Social Sciences (SPSS) version 19 (SPSS Inc., Chicago, IL, USA). Continuous variables are presented as (means ± standard deviations) and were compared between groups with Student’s t test or Mann Whitney test, as appropriate by type of distribution. Categorical variables were compared with chi-square test or Fisher exact test, depending on the number of observations. For the comparison of the scores of SF-36, a Wilcoxon rank sum test was applied. A P value of <0.05 was considered significant.

Two hundred and eighty six patients with post-operative diagnosis of appendicitis were identified, 214 of them were treated by Laparoscopic Appendectomy (LA) and 72 patients were underwent Open Appendectomy (OA). There were no difference in mean age, gender, comorbidities, ASA score, WBC count and CRP before operation between LA group and OA group (Table 1).

Table 1. Demographic and preoperative data in 286 old patients with appendicitis.

Laparoscopic appendectomy showed a longer operative time (P<0.001) than open appendectomy but a shorter time of duration of antibiotics use, diet and hospital stay (P<0.001) as compared to OA (Table 2). And the operation bleeding, postoperative bleeding and the cases of cecal fistula of LA group were all less than that of OA group. WBC count of POD 3 showed the patients receiving LA made earlier recovery than those receiving OA. Although 3 patients of LA group appeared subcutaneous emphysemasurgical site infection rate of LA was significant lower than that of OA. And 3 patients of OA group showed urinary retention after operation. There were no differences in pneumonia between LA group and OA group (Table 2). Evaluation of the appearance of the scar(s) and the postoperative pain showed that significantly more patients of the LA group were satisfied with the method of laparoscopy than the OA group (Figure 1a, P<0.001; Figure 1b, P<0.001). 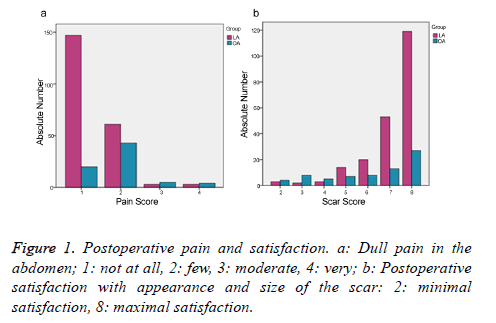 Laparoscopic surgery for appendicitis has been widely performed worldwide more than 20 years [8]. However, applying the laparoscope in the management of old patients with appendicitis is controversial due to worse function of heart, lungs and more complications compared to the young adults. High percentages of old patients show atypical presentations and often have been delayed in diagnosis owing to often vague symptoms, blunted tenderness, and diminished leukocytic responses [3]. And the delay in seeking medical care and in making diagnosis makes the inflammation progress in the elderly more serious than in the young patients. Direct exploration of the abdominal viscera is one of many advantages of laparoscopy in old patients, particularly in nondiagnostic or complicated cases. In our study, 38 patients were found to have other illness and received proper treatment benefitting from this viewable exploration. Laparoscopy also shows the low rates of postoperartive adhesion and mechanical bowel obstruction [9,10]. In our study, LA group showed shorter time for diet and less rate prolonged ileus than those of OA group. The reasons mainly depend on LA could examine the whole abdominal cavity and less inflammatory reaction secondary to the minimally invasive approach and sententiously dissection. And in order to preserving the function of lungs and heart, we tried to keep the position of the old patients in the horizon, not as the young patients keep in trendelenburg position during the LA operation. It is well known that LA is associated with less tissue trauma, shorter wound healing time, less rate of surgical site infection and shorter hospitalization time. The same results were also shown in our series. The earlier ambulation also could promote the patients' gastrointestinal peristalsis and prevention of the occurrence of accretion pneumonia. And the rate of complication in the elderly, we most concerned, in the LA group, such as pneumonia, was similar to the rate in the OA group. During the LA operation, we tended to decrease the pressure of laparoscopic pneumoperitoneum to 10 mmHg to relieve the heart and lungs' burden. During the general anesthesia, the anesthesiologist tried to maintain a stable blood pressure and avoids the fluctuation of the patient's blood pressure, especially when we were establishing the pneumoperitoneum. Although LA took little longer operation time than OA in elderly, we believed the benefit of old patients was worth choosing LA, and this operation time gap between LA and OA would gradually decrease with the proficiency in laparoscopic surgery. Moreover, the patients' quality of life after the laparoscopic appendectomy may be another important factor to be taken into account for the patients and the scholars. Appendectomy is one of the most frequently performed emergency operations. So, we mainly concerned two aspects: appearance of the scar(s) and the discomforts after operations. The results were very interesting: the patients of LA group showed better felling than patients of OA group. And the old patients were also concerned about the appearance of the incisions than assumed. A significantly higher satisfaction of the patients in the laparoscopic group concerning size and appearance of scars. So the long term results about Appendectomy should be taken count in during comparison of LA vs. OA.

Taken together, the findings of this study demonstrated that laparoscopic approach is a safe and suitable approach to the old patients with appendicitis. Laparoscopic appendectomy for is going to the first choice for acute appendicitis in the elderly. 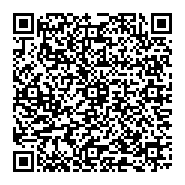